Review: THE FLASH #73 Perfectly Focuses on the Man Behind the Mask

The Flash Gets Back on Track!

The Flash is in the midst of his first year, and it’s been quite an eventful one. After coming back from the future, Barry defeats the Turtle in an attempt to rewrite it. The villain is sent to Iron Heights, and Barry continues with his superhero career. Iris has also been making leeway with her career as a reporter. Their careers cross paths when the plucky reporter tries to approach a group of blue masked thieves. They attempt to kill her, but Barry speeds in and disarms them all. He runs home to see he took one of the bullets. How will the Flash survive this incident? 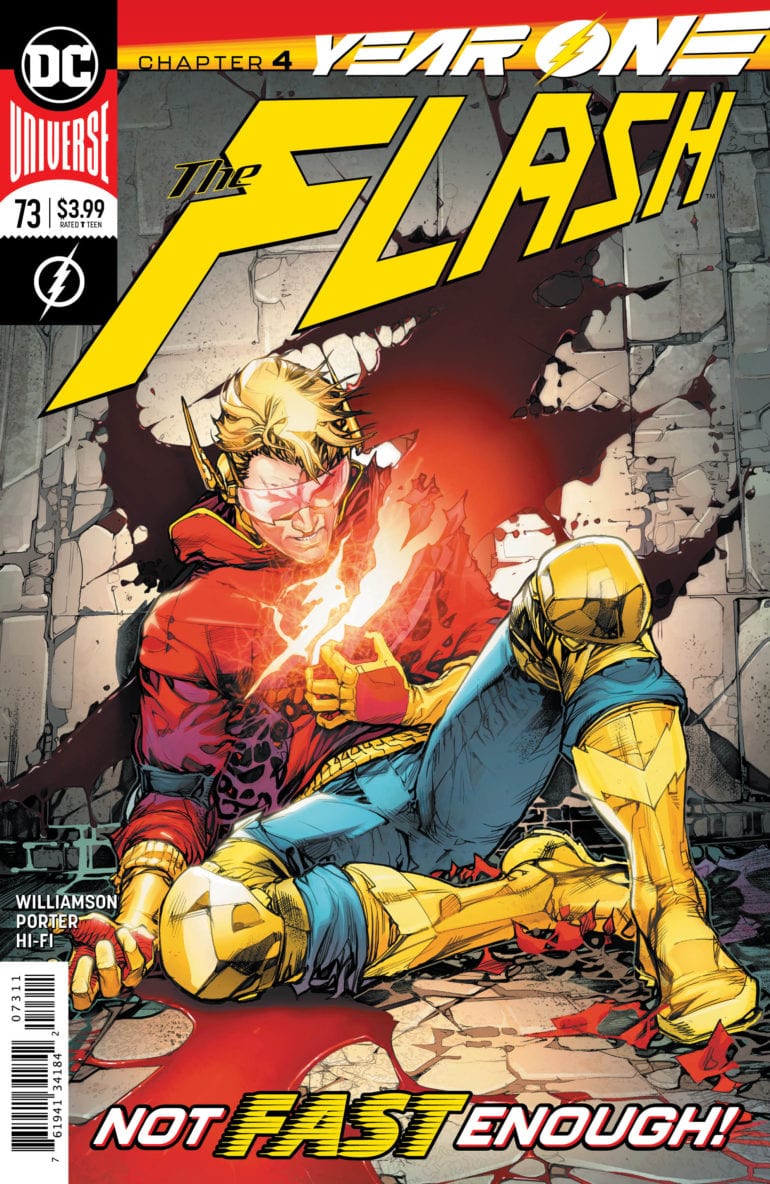 Picking up from right where we left off, Barry works to extract the bullet from his chest. While in the midst of his work, Iris quickly knocks on his door. She’s troubled for putting people in the line of fire and needs her boyfriend. Barry quickly removes his bullet, as well as learn of his accelerated healing, and opens the door to Iris. After a night together, Barry heads to Iron Heights to talk to Turtle. We learn that, much like our hero, Turtle was a scientist who got into a lab accident. The villain soon reaches out and touches Barry, learning instantly he is the Flash. 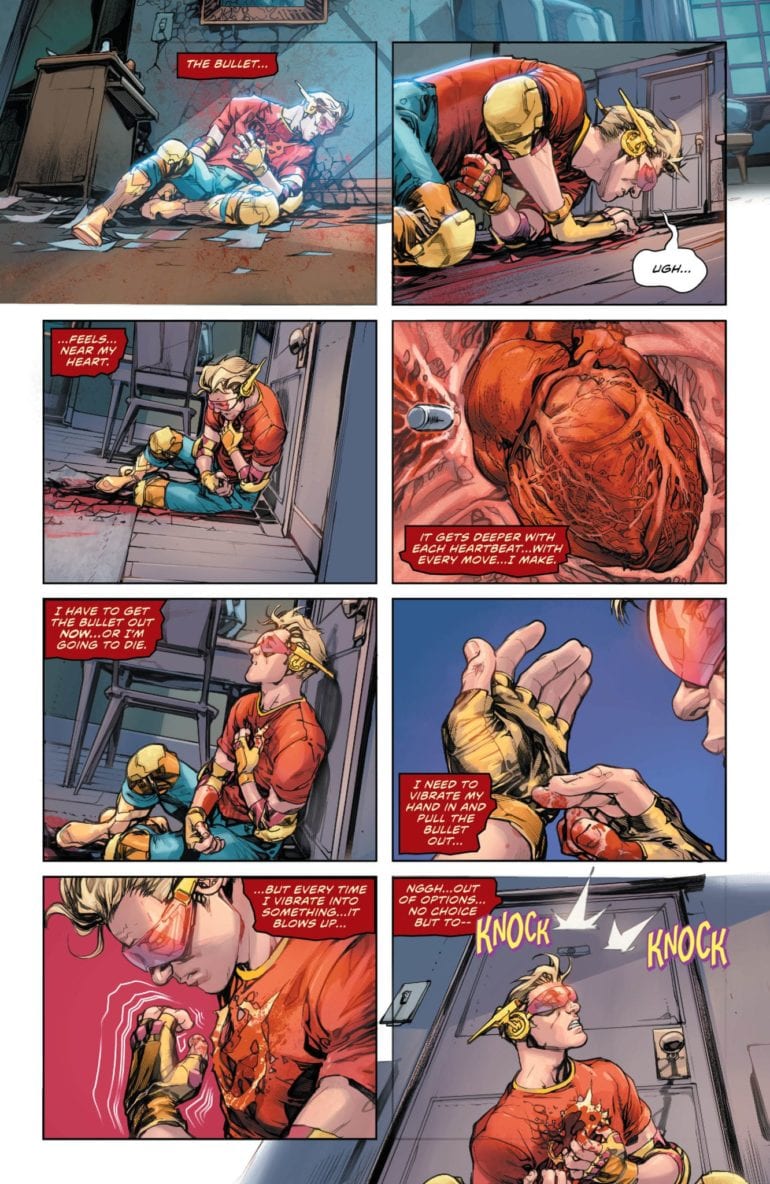 This chapter of Flash Year One has many ups to its story. Right from the get-go, we dive into one of the character’s biggest staples: his relationship with Iris. The opening nails their relationship to a tee and reminds readers why they’re such an iconic couple. She’s just as prone to running in as Flash, and he can ground her as well. The entire opening was incredibly sweet and left me smiling.

The Turtle’s section was also incredibly exciting. I am not sure if this is a reimagining of his origin, but it gives a connection to Flash I never thought possible. It makes the character more relatable as well, as he was a quiet, nerdy kid before his transformation. The only thing that makes the story any better is the ending, which if you’ve been reading up to this point, will leave you with a smile. This story is on the fast track of becoming a Flash classic. Here’s hoping it ends on a high note with one final epic battle. 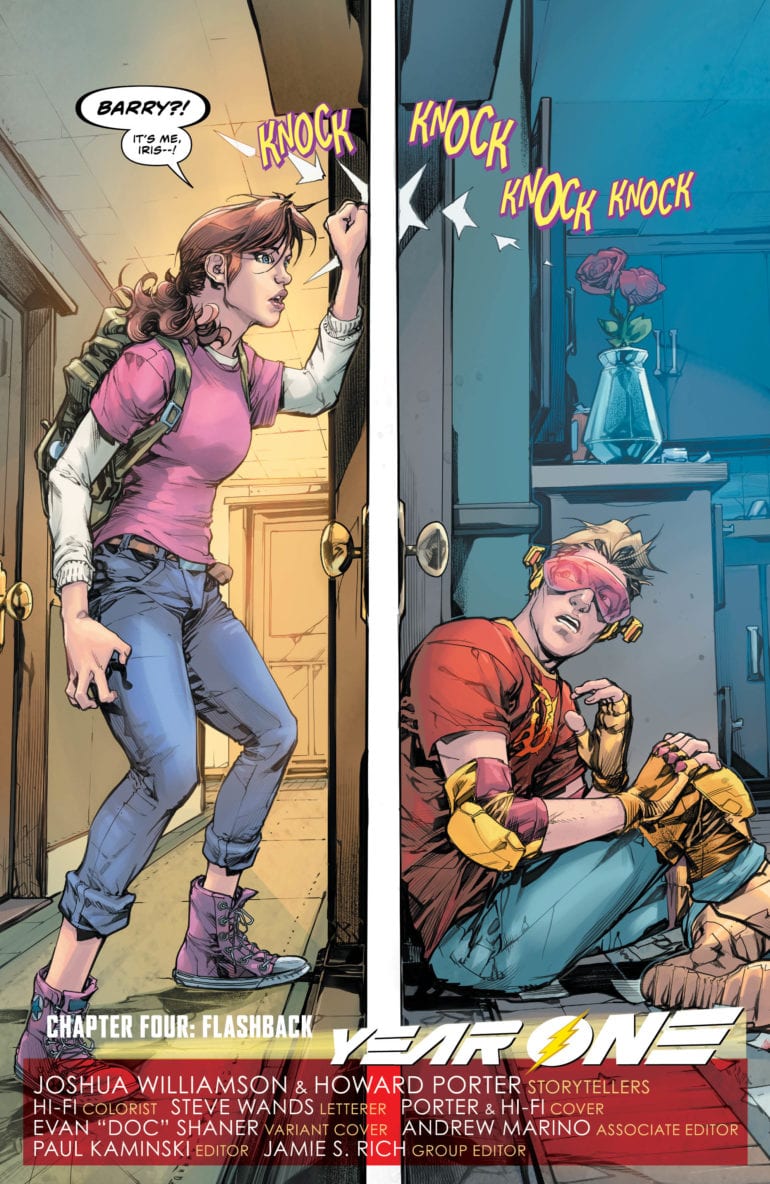 Porter’s art continues to kick ass. He’s always done well during this arc, but this one was able to accomplish two goals. Porter can keep characters grounded and make the slower, more character-driven scenes more realistic. The conversation between Barry and Iris bleeds emotion through dialogue, but the art makes it even better.

While we don’t get a ton of it this issue, Porter also does a great job with the powers. Flash’s and Turtle’s powers clashing is always a sight to behold. Hi-Fi takes it a step further with colorwork that’s pleasing to the eyes. The art is definitely the constant great of this arc and makes this reviewer come back. 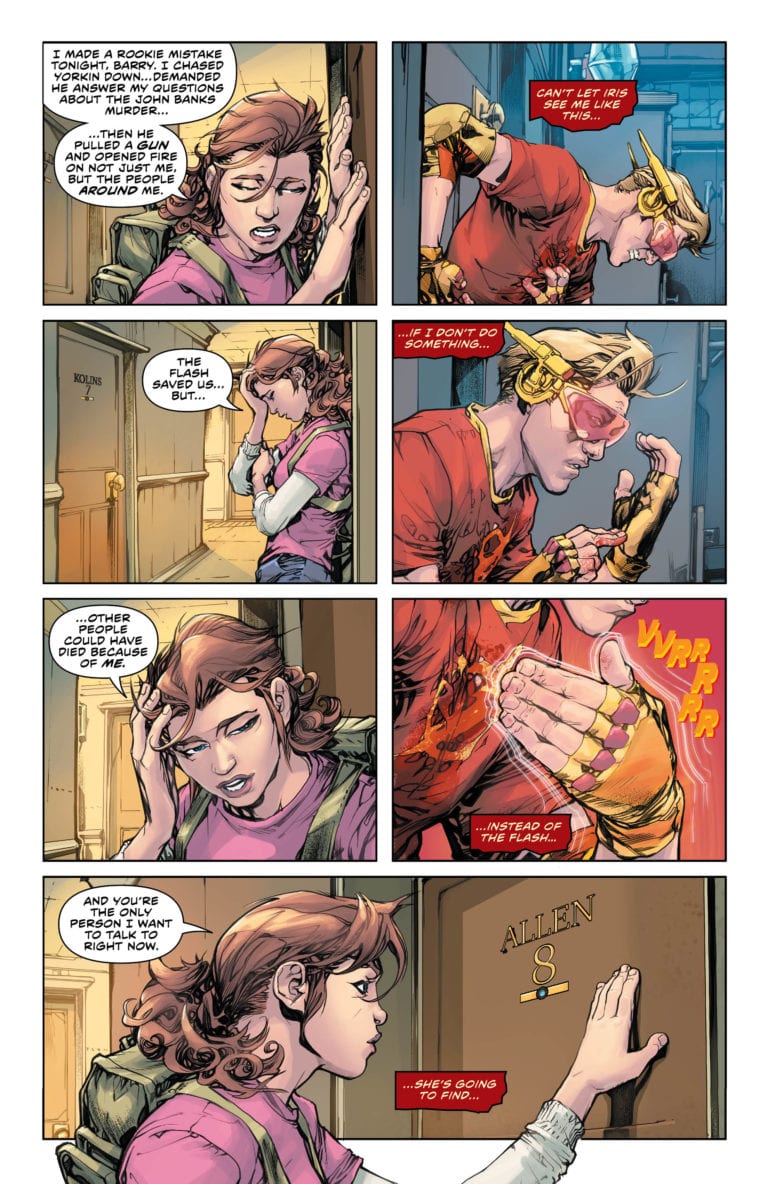 Just when readers thought the story would fall flat, the Flash Creative team brings out this curveball. We have magnificent character building, a necessity for these Year One stories. Porter continues to shine With his art style, as well as paired with Hi-Fi’s colorwork. This is just a fantastic issue and chapter for Flash Year One.

Review: THE FLASH #73 Perfectly Focuses on the Man Behind the MaskThe Flash takes a minute to get to the heart of Barry Allen and other characters.