Review: BARRY FACES THE TERROR OF THE TURTLE IN THE FLASH #72

The Flash Faces his First Foe!

We are in the midst of The Flash: Year One, and it’s been a wild ride so far. After his fated lightning strike at his lab, Barry Allen has begun to experiment with his powers. While trying to hit an all-time high with his speed, the Scarlet Speedster is sent to the future. We learn that Central City has fallen and that a villain known as the Turtle reigns supreme.

Before Barry is captured to feed the King Turtle, an older version of himself saves him. The two Flashes work their way through the ruins to find the cosmic treadmill and send the younger back. When Barry makes it back, however, he soon discovers the Turtle making his debut. Can Flash stop this villain from ruling the future? 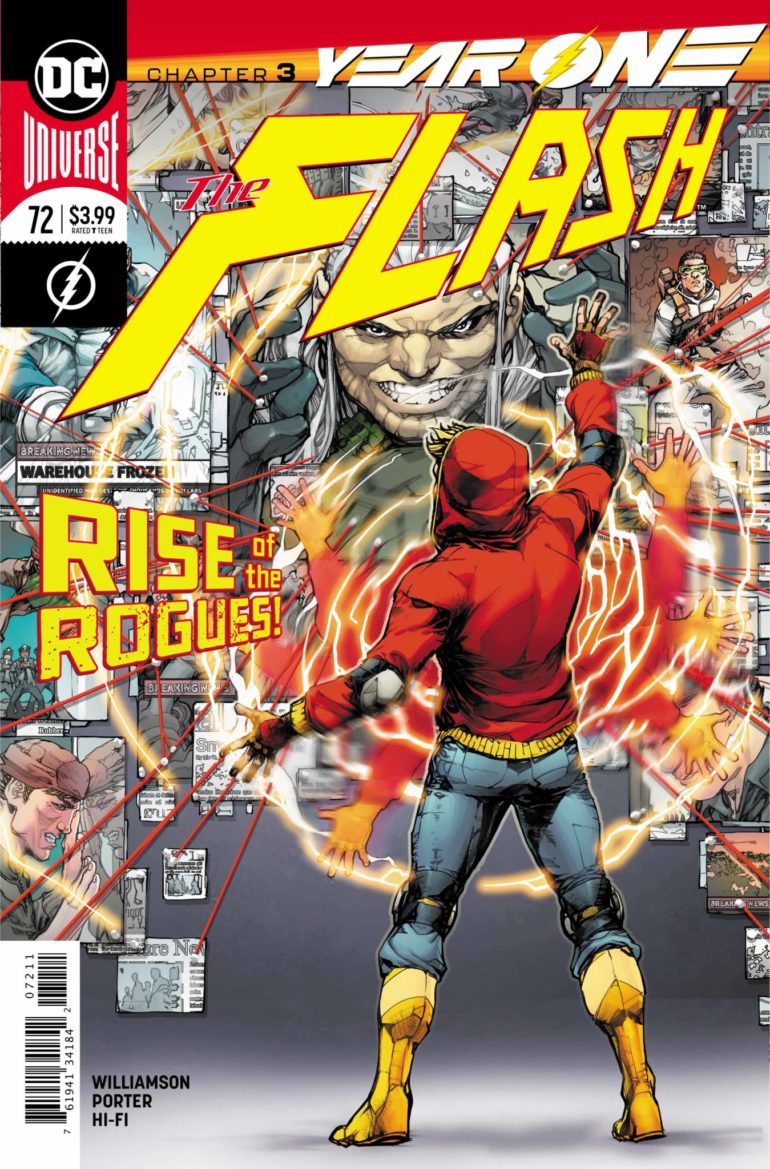 We open up with Barry running in to face Turtle, forgetting what his older counterpart told him. As his speed begins to get drained, Turtle is left puzzled by the Flash and the origin of his powers. Before Barry can be defeated by the speed siphoning meta, he vibrates into a wall and causes it to explode. While it is able to knock out Turtle, it also sends debris flying at bystanders, including Iris. Flash quickly moves and saves them all and Turtle is shortly arrested after that. Time passes, and Barry soon begins making a name for himself as the Flash. It’s not long before he learns of a new criminal, a group of thieves wearing blue masks. 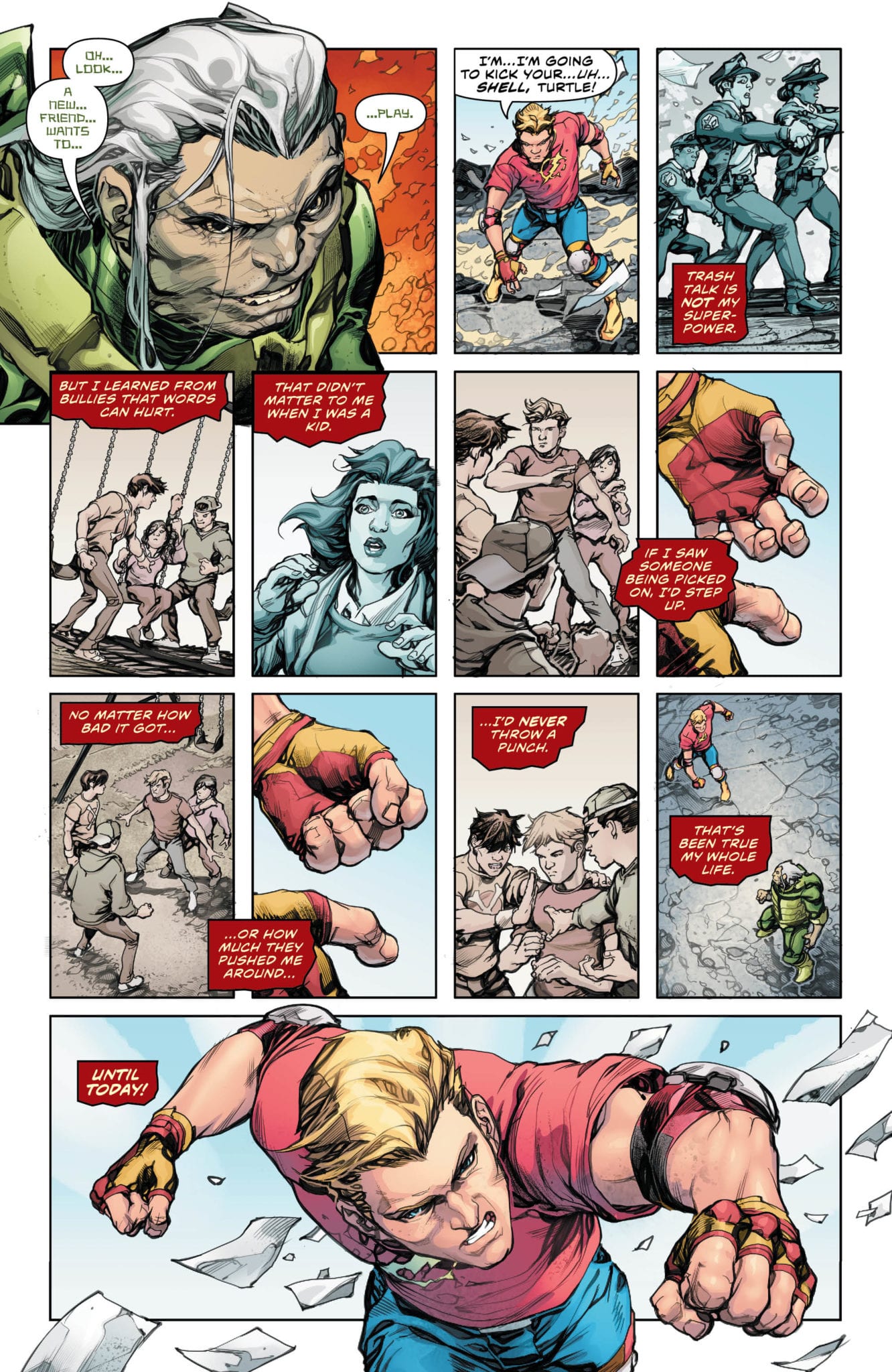 Despite a few stand out transitions, I am honestly concerned about how this story is going to pan out. This story appeared to have its villain, and he’s done by the first half of this story. We had an entire issue that showed the Turtle taking over the city and Flash being the lone defender of the city. Turtle gets taken down as soon as Barry gets back! The usual formula for this story is that the battle with the future threat is at the end of the arc. This story treats it as if the Turtle threat was put down, with a sweet epilogue.

The transitions between periods are probably the best part of the issue. In them, we see Barry grow more and more into the Flash. It’s quick, but even these small moments help flesh out the origin story in the making. From him choosing his symbol to finally learning to look forward to tomorrow, The Flash origin gets more detailed, and it makes me appreciate it a little more. 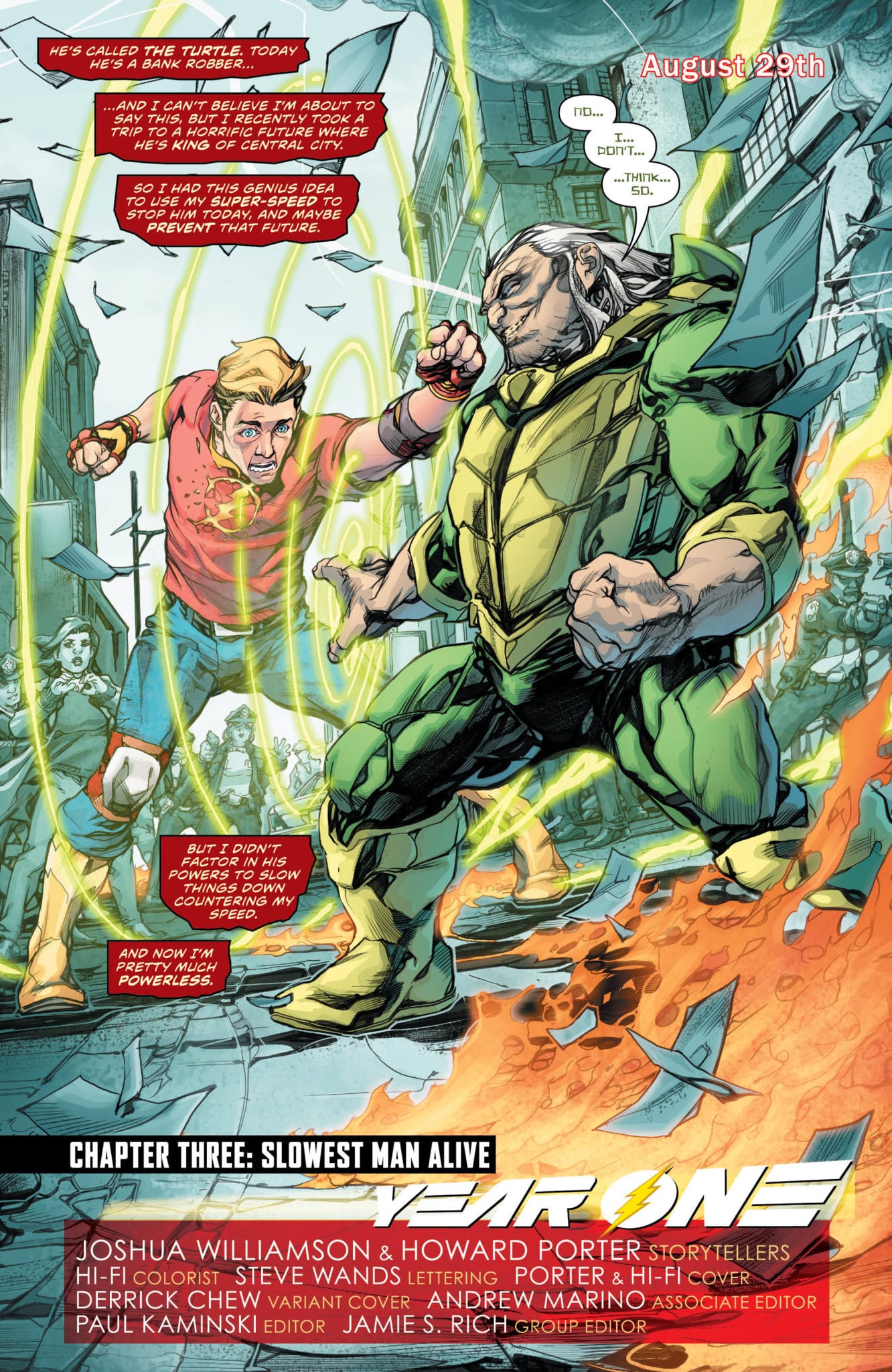 Howard Porter is just a perfect fit for this series. He is able to create these fantastic designs for the powers, and each panel is his jaw-dropping. Barry’s original Flash costume looks fantastic, being both iconic and straightforward at the same time. The only thing that could make it better is adding the spectacular colorwork of Hi-Fi to the mix. While they don’t wholly save the story, the fantastic artwork does an excellent job of selling this issue. 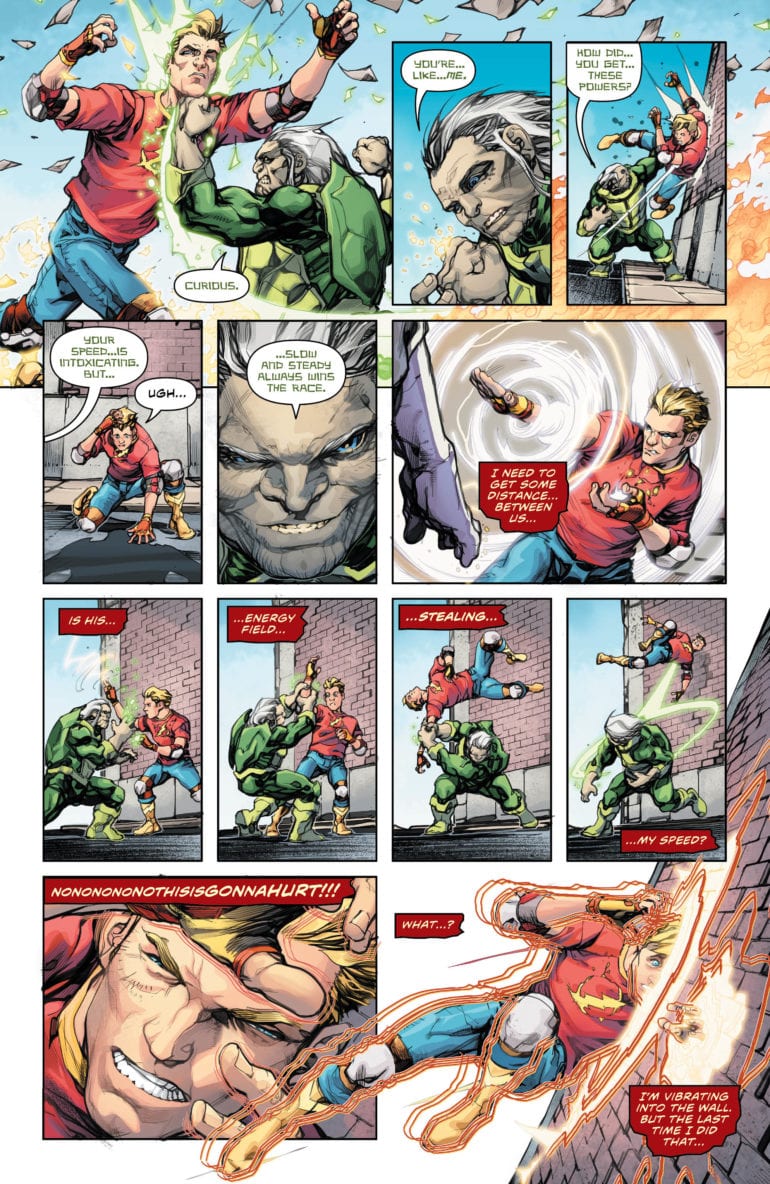 This story has tripped up, and it might have trouble getting back on track. What was supposed to be an overarching villain has been passed off as a one-off encounter. While there is a chance he might return, the story is continuing on with a different Flash villain. While the art of Howard Porter might try and sell readers on a good story, this issue just falls flat. The Flash might be getting one of his greatest foes next issue, but will it actually have an impact on the future teased in the second chapter?

The Flash Year One story has tripped up, despite beautiful artwork.Review: BARRY FACES THE TERROR OF THE TURTLE IN THE FLASH #72