Review: The Turtle Rules the Future in THE FLASH #71

The Future is Bleak for the Flash!

We’ve gone back to the beginning of the Flash! Barry Allen is a CSI working for Central City. He lives his lives life in Central City as he also tries to solve his mother’s murder. The fateful day comes where he is struck by a bolt of lightning and forces him into a coma. By the time he awakens, Barry realizes he has super speed. He begins to test his abilities, learning the iconic skills the Flash is known for. Barry then decides to go as fast as he can and ends up running into the future. There he learns Central City has fallen and an older Flash continues to fight a dangerous foe. What the heck happened to Barry’s city?! 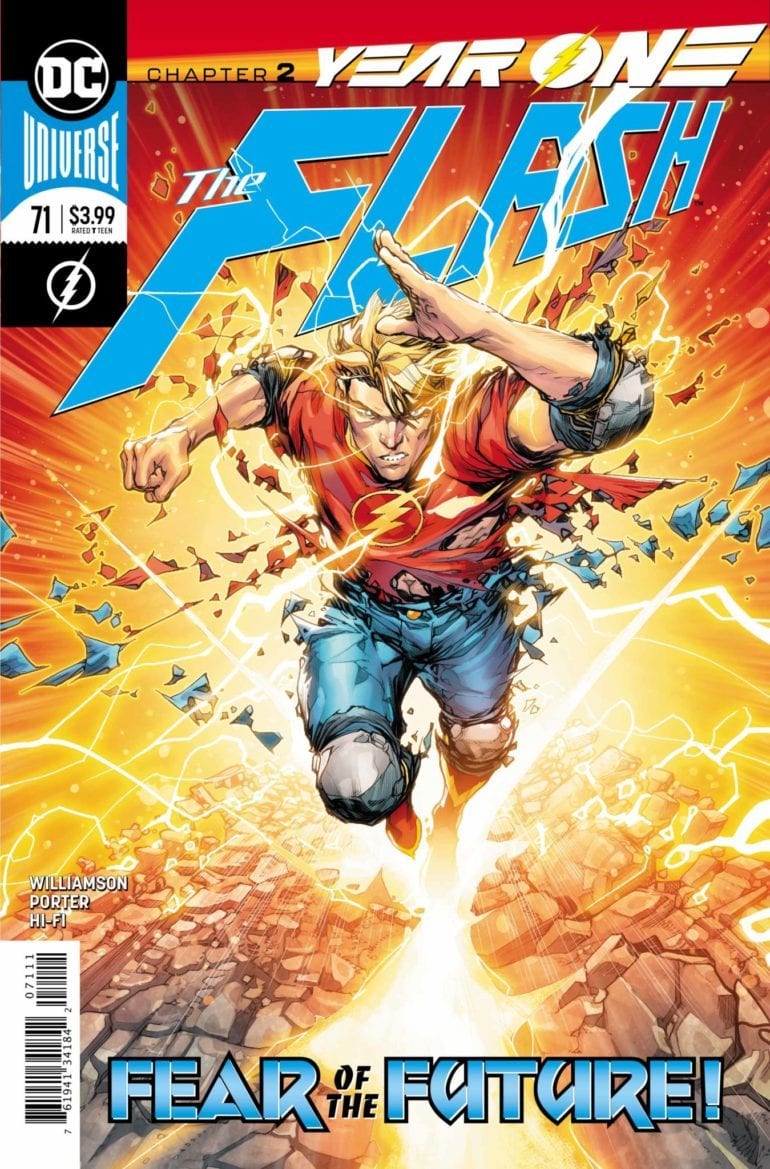 After finally settling into the timeline, Barry looks around and begins to freak out that his home city is in ruins. The older Flash quickly tells him to relax and to follow him to a place he can send his younger self back. Along the way, he explains that the villain responsible for the destruction was the Turtle. The slow villain had gained power over the years thanks to his abilities and was able to defeat the Flash and take the city. The older Flash leads Barry to a compound that has the cosmic treadmill and the pair head in to take it from the Turtle’s army. 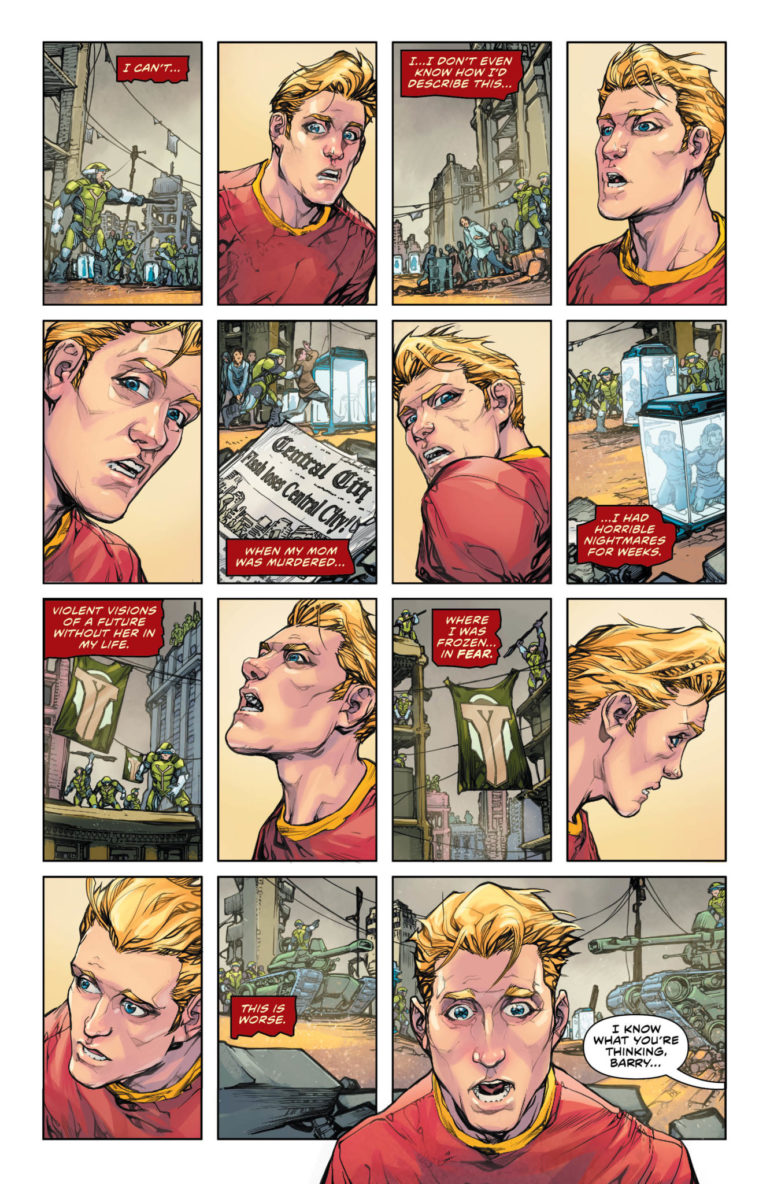 I can already see where this storyline is going to go and that’s a problem. Barry will try and change the future, but it’s going to go wrong. It’s a Flash time travel trope that has been done before. We still have a bit of a way to go in the arc but it needs to add something new, or it’s going to lose readers.

That being said, I loved the interaction between Barry and the old Flash. Without Jay Garrick in the timeline, we need that elder figure for the Flash. The older Barry’s explanation on how he doesn’t need to use his fists to fight was a perfect teacher-student moment. While moments like these are great, it doesn’t help the story as a whole. 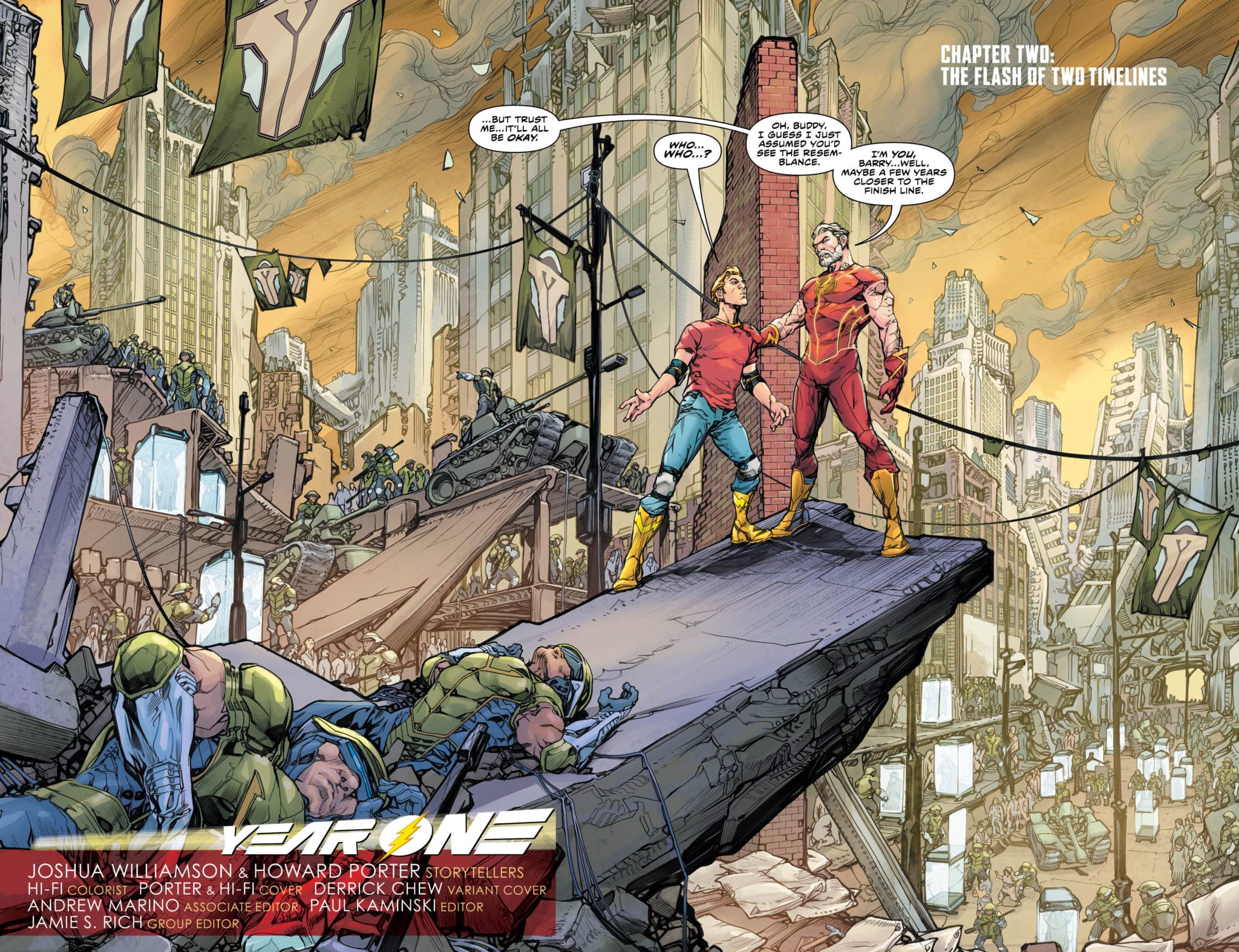 Howard Porter’s art continues to knock it out of the park. The designs of future Flash and Turtle look fantastic as well as the dystopian future they live in. The super speed is also creatively illustrated, especially when Barry returns to the present. Throw in the fantastic colors of Hi-Fi, and we have one of the best-looking comics on shelves.

While it looks pretty, this comic’s story isn’t doing anything new yet. While I love the interactions between characters, the overall story is beginning to look like a predictable time travel story. All we can do at this point is to wait for the next issue and hope the Flash can pull out a fresh twist.

The first year of the Flash is pretty but doesn't provide anything fresh.Jose "Jody" CardonaReview: The Turtle Rules the Future in THE FLASH #71