Suicide Squad #3, written by Tom Taylor, with art by Bruno Redondo, colors by Adriano Lucas and letters by Wes Abbott, continues to play things close to the chest. With every answer, we get ten more questions. And with this creative team on its A-game, this no-holds-barred series continues to be a wild ride.

Taylor likes to keep the readers in the dark as much as possible. It’s a brilliant approach for an espionage-thriller. In past projects, Taylor has worked out of continuity. This gave him the license to kill off or maim characters left, right and center. Essentially, he was able to imbue his stories with real stakes as the “but they’ll never kill Superman” logic no longer applied. When moving to a project like Suicide Squad you would expect him to be limited in changes to continuity. Thank God that’s not the case. Each new issue, something new happens that you didn’t think DC would let him do. It’s wonderful.

Though Redondo’s style is very naturalistic, he occasionally takes the “Kevin Maguire” approach in this issue. Especially when things are heating up and a lesser comic would fight the “cheesiness” only to make it worse, Redondo gives the characters wild expressions. Their over-expressive faces in otherwise tense scenes assures us this creative team doesn’t take itself too seriously. Redondo knows the Squad is as goofy as it is deadly, and balances those two aspects of Task Force X with precision. 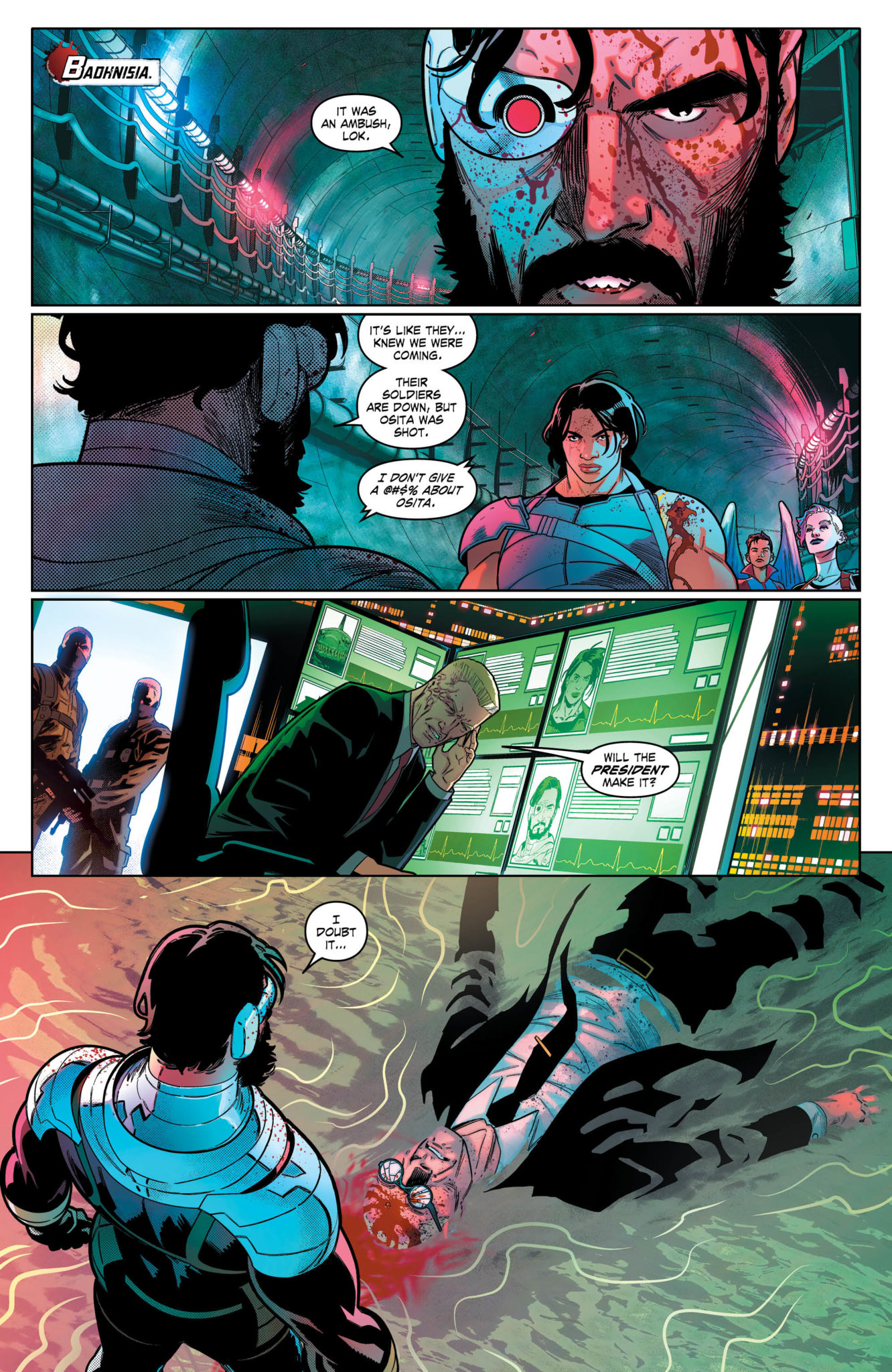 Lucas’ colors continue to be nothing but fun. While his Tarantino-esque color palette from previous issues still finds its place here and there, much of the issue takes a darker tone. And in each dim scene, Lucas seems to make any excuse to make the scene gorgeous. When the Squad is talking in a sewer over a dead body, the sewer walls are lined with red lights. And so the entire scene is set in a red glow. It’s great to see that Lucas can have fun, not only with neon yellows, but in the darker scenes too. 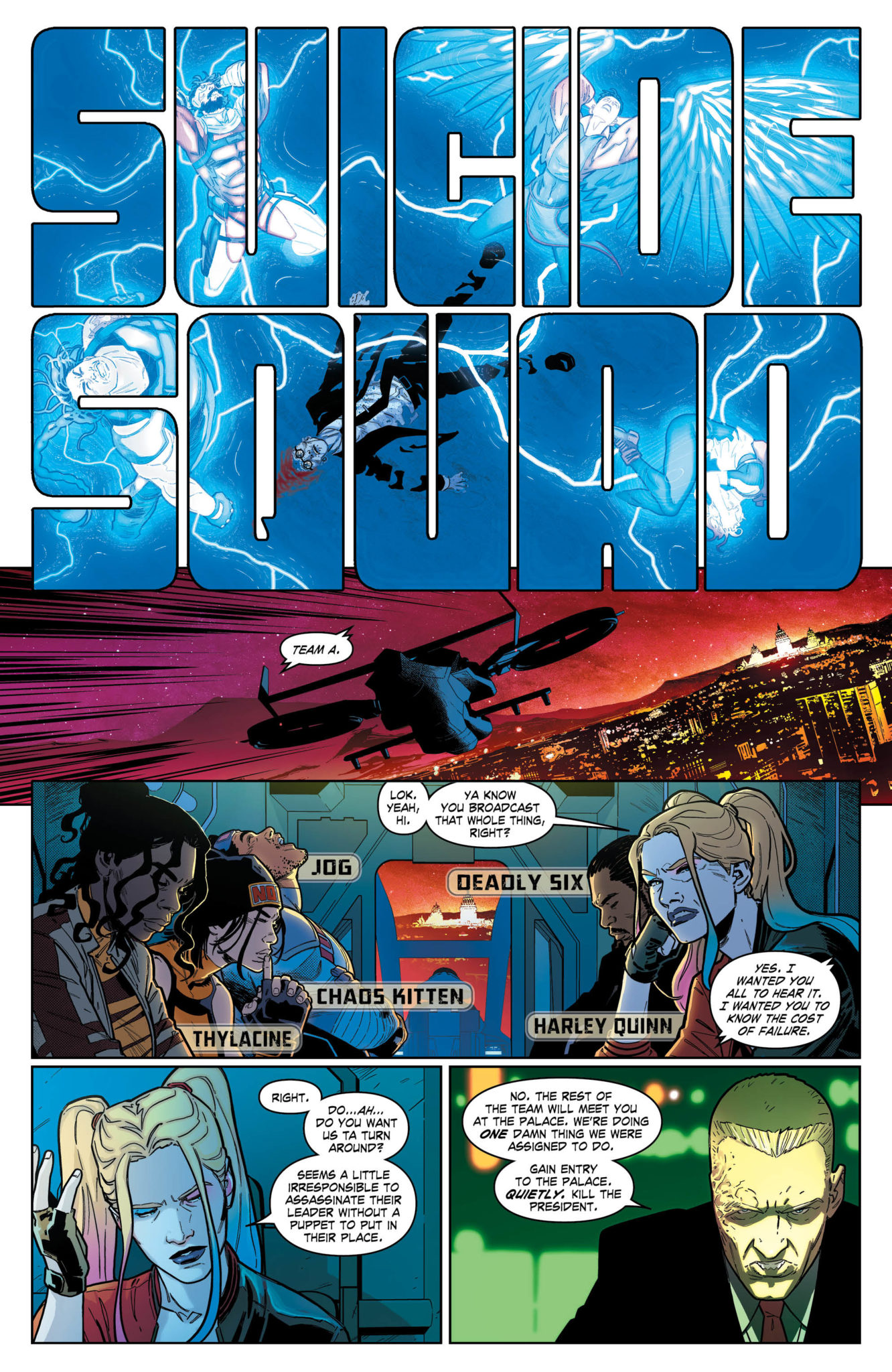 Abbott’s lettering for Suicide Squad #3 is simple but brilliant. The slightest variations in the size of characters’ lines immediately establishes the power dynamics of a scene. When Lok speaks to a soldier, the soldier’s lines are written smaller. Of course, Abbott shows us the soldier’s feeling that he isn’t allowed to talk. Abbott’s sound effects are also lots of fun. They often take the form of whatever is making the noise. The sound effects that accompany a wound look like blood gushing out. The sound effects that go along with electricity look like lightning bolts. The lettering becomes a part of the art throughout the issue.

I’m calling it. This may be the best book of the year. And it’s only February. If Taylor and company continue to fire on all cylinders, we are in for a wild and magnificent ride. They know when to keep their readers in the dark, and even when they provide answers they know how to keep us asking questions. Pick up your copy of Suicide Squad #3 on February 26th at a comic book shop near you.

This series is everything you want out of the SUICIDE SQUAD, and more.SUICIDE SQUAD #3 Gives Us More Questions for Every Answer