STRAY DOGS Is A Master Class In Upending Expectations

I knew absolutely nothing about STRAY DOGS going into the first issue. I had seen the cover; that’s about it. But with the final issue out now, I can say that this series is not only my favorite comic of the year so far, but it’s one of the best comics I’ve read in recent memory.

Going into the series cold enhanced my experience, so if you want to have that same sense of wonder and surprise, stop reading this and go read STRAY DOGS first. I’m not going to talk about major spoilers, but I am going to talk about some general plot points and themes that made the story feel special to me. 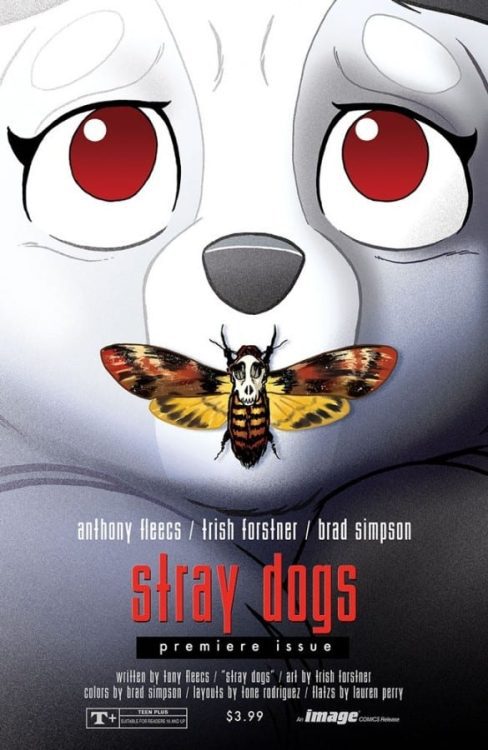 From writer Tony Fleecs and artist Trish Forstner (with colors by Brad Simpson and layouts by Tone Rodriguez), STRAY DOGS is about a group of dogs who are presented with the possibility that their owner is a serial killer. And so begins a classic murder mystery, right? Wrong! Because these investigators are dogs, complete with their species’ signature poor memory. So they’re constantly losing track of their investigation and questioning one another.

It sounds like a simple enough premise on paper, but it’s such a clever, unique, and jarring reading experience, and that’s largely due to Forstner’s art style.

Forstner draws in the style of a Don Bluth animated movie. The dogs are all wide-eyed and cartoony; it gives the comic a very wholesome and fun vibe. The art style draws you in — it’s warm, familiar, and inviting — and then BAM, you’re hit with a dark tale of murder and intrigue. Your brain isn’t sure how to process this juxtaposition, but it likes it. 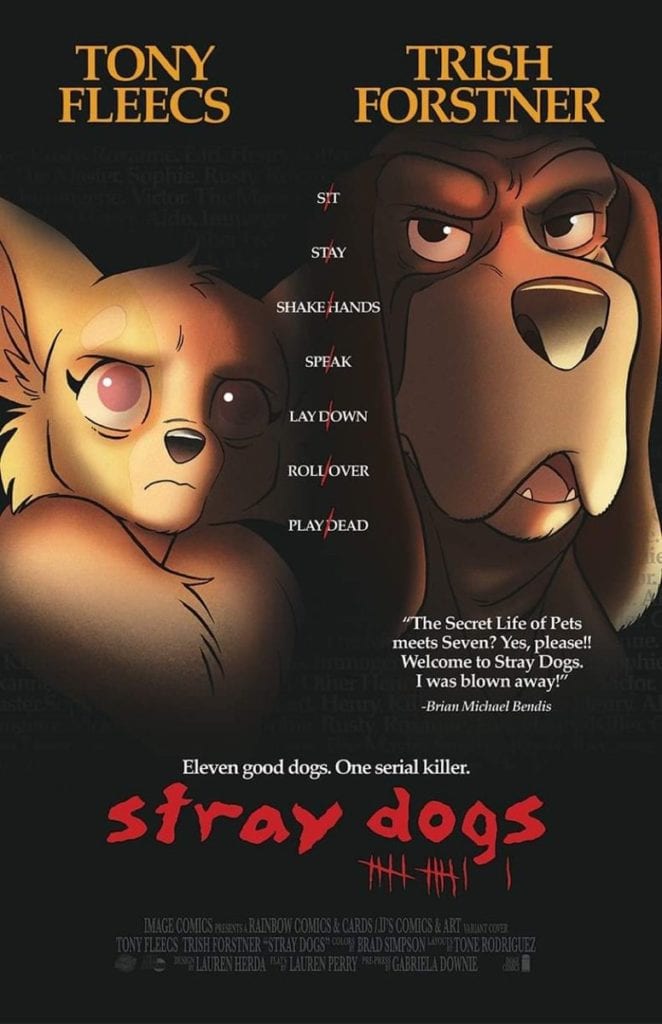 To put it as plainly as I can, STRAY DOGS is fucking brilliant. It’s Stray Bullets meets All Dogs Go To Heaven, and comic creators all over are kicking themselves that they didn’t think of it first.

The combination of charming art and gripping story aside, the choice to tell this story from the dogs’ perspective is an inspired one. It automatically creates a sense of tension and fear that something bad is going to happen to the main characters. We’re living in a time where, by and large, people care about the well-being of animals more than that of other humans. Think about how many times you’ve heard a variation of the phrase “I like my dog/cat/rodent more than people.” For Fleecs, Forstner, and company to take that idea and expand upon it like this really makes you reflect. I read a ton of crime comics, but I never realized how little I actually care about the human protagonists’ well-being until I read a crime comic starring dogs.

I could talk about this book all day: I could tell you about how each of the dogs has a wonderfully distinct voice and personality, or how the colors and lettering play into the contrast between the story and the art. But to fully appreciate all of that, you really need to experience it firsthand. All I’m here to do is invite you to pick up STRAY DOGS. It’s the dog-themed murder mystery you didn’t know you needed, but trust me, you need it so much.