Meet the man behind the mask in Skulldigger and Skeleton Boy #2, out this week from Dark Horse.

Jeff Lemire expands on his Black Hammer universe with another chapter about the adventures of Skulldigger. This issue is the training montage before the $#!@ hits the fan. Lemire uses the other panels to give the reader a reason to care about Skulldigger and the only detective that actually wants to take him down. 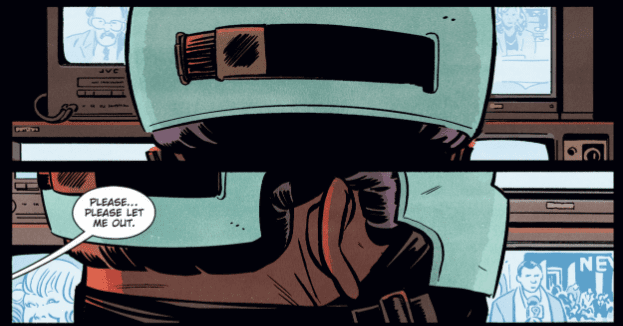 Tonci Zonjic nails the tone for this issue. Skulldigger is a very low budget Batman/Punisher. He doesn’t have the money or space for a Batcave so he trains his ward in the basement. The basement appears to be the only room in the house with proper lighting. The training pages are presented in a way that already feels like a montage. Fully red panels alternate with black and white minimalist drawings. A two page spread with long panels shows time passing and improvement, while performing different exercises with Skulldigger.

Skulldigger is channeling Ozymandias as well. He has old tube TVs stacked on each other and set to different news stations throughout the city. Zonjic’s colors create the feeling that Skulldigger has a past that haunts him. He is living in the dark and even eating in the dark. He only steps out of the darkness to train the boy he’s taken under his wing. It looks like the only light he allows comes from the neons of the city outside and his hoard of old TVs. 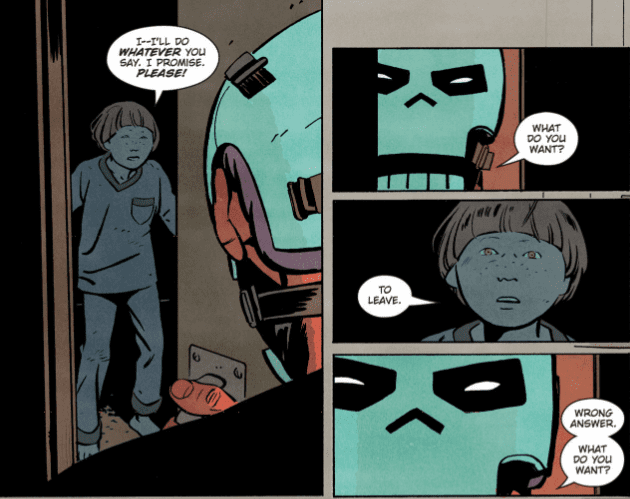 Steve Wands handles the letters for Skulldigger & Skeleton Boy and uses a style that would’ve been popular in the era this issue takes place. Easily legible and blocky letters that blend right into the art is something Wands excels at. He always has work and is used by the best writers in the business, and it’s easy to see why.

Skulldigger’s home reminded me of Unbreakable, especially the scene when Bruce Willis is lifting the bar with the paint cans tied to it. He keeps telling his son to move further and further back until he’s sitting up the stairs while Mr. Unbreakable tests his newly discovered strength. Most vigilante’s without superpowers were born wealthy or have become wealthy through some other means, but not Skulldigger. While Skulldigger’s closest comparison is obviously Batman or The Punisher, the story and the actual lives of the characters are more akin to M. Night Shyamalan’s “superhero” universe. 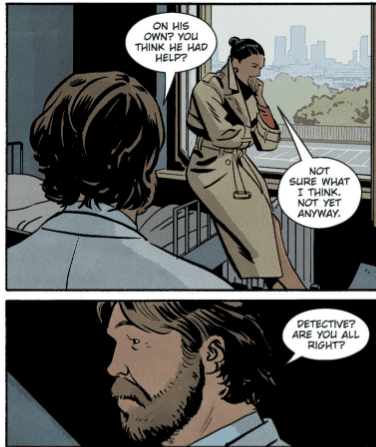 Black Hammer has dealt with some world ending and cosmic events up until now, but this story is about as street level as it gets. I think these characters have great potential to become their own version of DC. Valiant is working on their own shared universe of heroes. Lemire might have given Dark Horse their own Watchmen to potentially rival the big 2.

What did you think of Skulldigger & Skeleton Boy #2? What else do you think the Black Hammerverse needs to potentially compete with Marvel and DC? Let us know in the comments below.