SHADOWMAN #2: Suckered In By A Thickening Plot

Shadowman #2 continues Valiant Entertainment’s tale of intrigue on May 26. Writer Cullen Bunn gives the titular character an attitude to match his suspenseful job. Artist Jon Davis-Hunt gives this issue a heavy dose of anticipation via illustrations. The feelings of intensity increase via Jordie Bellaire’s disorienting colors, and the lettering by Clayton Cowles provide sounds that beckon the reader onwards.

Shadowman #2 stands out by furthering a theme Bunn develops from the last issue. The people and demons Shadowman faces have a perverse drive for depraving acts. It’s as if some greater force pushes these people to normalize such macabre behavior for some direction in their lives. With Shadowman’s powers not allowing him to feel fear, the reader can’t help but feel it for him. Because with anger and disgust driving him, it feels like he is being exploited by a puppet master. As without the fear to hold back his worst impulses, Shadowman isn’t too different from his enemies. 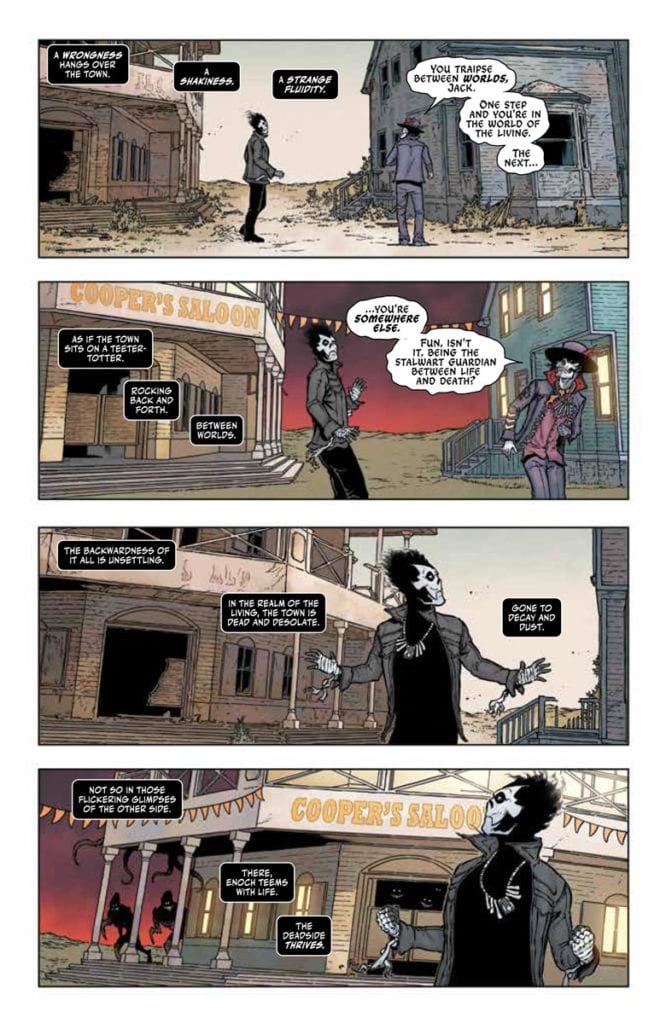 Davis-Hunt illustrates Shadowman #2 with an air of suspense. Each scene has an action taking place with something sinister flourishing. For Shadowman, who sees between two worlds, this is almost a given. Frankly, it’s hard to determine if the empty town or the ghost inhabited side is scarier. The Deadside looks lively with the demons living in it and the complementary color schemes by Bellaire. Unlike the dusty brown town that spits out ghosts. This is to say nothing of how Shadowman’s color scheme and outlining stand out in both realities; it highlights his role as a balance keeper of the Deadside.

The lettering by Cowles demonstrates the power of the voices spoken by the characters. Depending on the situation and a character’s presence, their voices enhance the scenarios. Looking at one page, Baron Samedi says everything to know about Shadowman’s role in two panels and stylized word balloons. Unlike how Shadowman takes a longer time to process everything through his captions.

Shadowman #2 gets a firmer grip on the reader by diving into the titular character’s psyche. There are forces at work that the reader has to realize for Shadowman because it feels like he’s looking for his footing. Readers can only wait until the next development.

Shadowman #2 has the reader enticed by Shadowman's role in the grand scheme of the series. Because they can't help but feel worried that he's being pulled around.SHADOWMAN #2: Suckered In By A Thickening Plot