From writer & artist Natasha Alterici comes a beautiful, funny, and kickass take on old Norse mythology in Heathen. Featuring additional art by Ashley A. Woods and lettering from Rachel Deering and Morgan Martinez, this series is an impactful tale of love, acceptance, masculinity & femininity, and how to negotiate with mermaids. Featuring a fantastic character-driven plot and stunning visuals, Heathen is a must-read for 2022.

“Aydis is a viking, a warrior, an outcast, and a self-proclaimed heathen. Aydis is friend to the talking horse Saga, rescuer of the immortal Valkyrie Brynhild, and battler of demons and fantastic monsters. Aydis is a woman. Born into a time of warfare, suffering, and subjugation of women, she is on a mission to end the oppressive reign of the god-king 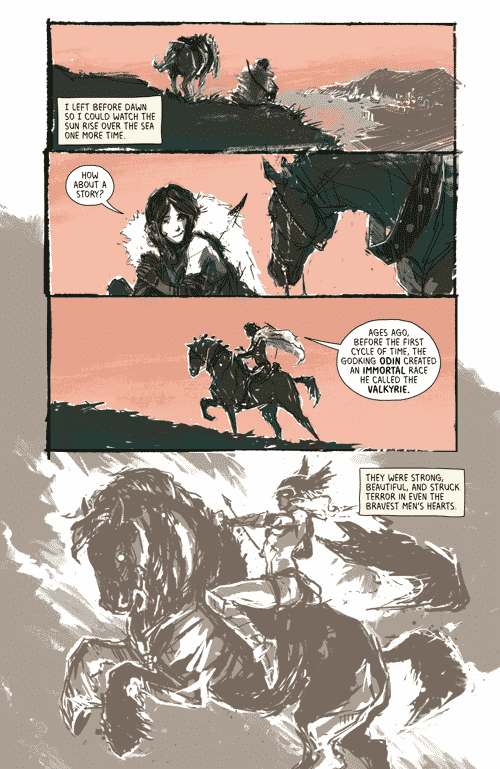 Natasha Alterici comes out of the gate tackling socio-political issues left and right in Heathen, while still crafting a wholly engaging and entertaining story. As the solicit states, Aydis – our protagonist – is a woman woman and a warrior, which isn’t *that* rare, but still, men will be men. On top of this, she has been banished from her village for her romantic affiliation with another woman. So, she journeys in exile to free the legendary leader of the Valkyries from a curse Odin placed on her. This is an era of warfare and superstition. Not only do the traditions of the Norsemen hold, but Christianity is making a growing impression on these Vikings’ homeland. All of these subjects and more are handled by Alterici via memorable moments throughout the story. As characters part ways for a time they come across different situations (side quests, really) that broach of particular subject matter. What’s special here is that it all fits so well. None of it feels forced, as the tone is light and fantastical enough that the whole comic has a sort of limitless story possibility. That being said, these sequences still feel grounded in reality.

Alterici’s choices in characterization and dialogue do a wonderful job of creating a consistent tone in the comic. Despite much of its serious subject matter, Heathen is often very funny. The back and forth among many of the characters is snarky and witty, without ever broaching too hard into Whedon/MCU style “quips” that are so prevalent in modern dialogue writing. While there are a lot of great scenes and memorable characters, I believe my favorites are Skoll and Hati. If they could get their own spinoff, that would be great. With all the levity this comic brings, Alterici still lands the serious moments perfectly. The importance and gravity of the major plot events and the more commentative scenes are all treated with care. Alterici pens some absolute magic in this book, with a cast of wholly memorable and unique characters and themes that will no doubt hit hard for many readers. While there is a bit of a plot contrivance near the end (some allies meeting up with other allies out of nowhere) and the final issue does feel a tad rushed, this series is very tightly constructed and wonderfully written. 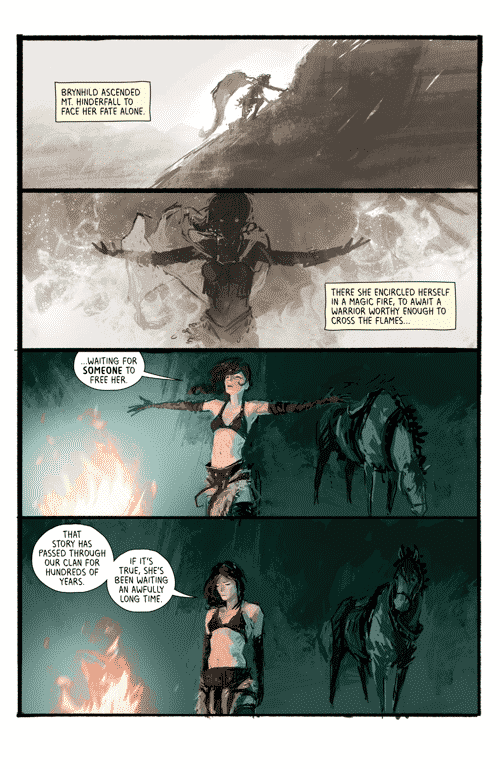 What will doubtless stay in readers’ minds after finishing Heathen is how Alterici visually crafts her take on the Norse world. Her approach mixes a sort of watercolor and wax-pencil landscape design with phenomenal character animations to craft something completely unique. Readers will be immediately endeared to the cast just through how much attention to detail Alterici puts into facial expressions. There’s a sort of “Webtoon” style approach to her design, and this is meant entirely as a compliment. Every page has a definite “thumbnail” moment that nails down the book’s humor. On the other hand, all other ranges of emotion are felt deeply in how Alterici displays it in her cast. Animal and creature designs are also on point. It’s tempting to ask how Alterici felt while drawing so many horses and wolves, known pain-points for comic artists, but regardless she absolutely nails it every time. Her landscape and many other details are often kept to a minimalist sort of sketchbook style. This, combined with her earthy watercolor tones, makes the series feel more like an ancient scrawling of a mythical tale. This isn’t always the case, as many of the outfits and some structures are given considerable attention depending on the context of a scene. Alterici’s page and panel composition creates a steady, careful pace for the reader to move through the story with. Character moments have a great classic “comic strip” feel to them, where conversations come off as measured and impactful. The action is also well-choreographed and epic, making the badass sequences be, well, more badass. The lettering from Rachel Deering and Morgan Martinez is solid and easy to read, with a hand-drawn feel that fits the comic. The SFX notes sort of blend into the panels, making them noticeable while not standing out too much.

It should be noted that Alterici steps away from the art after issue #8, with Ashley A. Woods taking over for the final four chapters. The shift is clearly noticeable, but most readers should adjust quickly to the change. Woods does a great job of mimicking Alterici’s style and utilizing her designs to finish this comic’s story. Truthfully, I find Alterici’s work preferable, but Woods is still stellar in these final issues. Overall, Heathen is is a fantastic looking comic series with a noticeably unique visual style that suits its setting and atmosphere brilliantly. 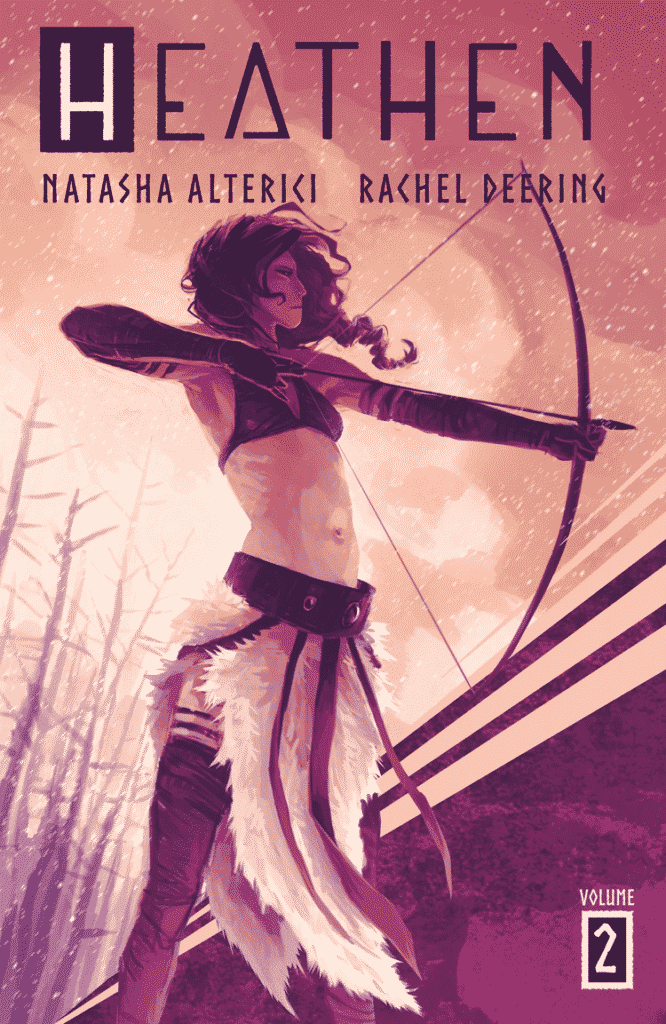 Heathen is yet another outstanding original creation in the Vault Comics lineup. Natasha Alterici, with the help of artist Ashley A. Woods and letterers Rachel Deering and Morgan Martinez, creates a powerful, meaningful, kickass, and hilarious 12-issue story that takes full advantage of its mythology by breaking all the fake rules that are placed upon it. With heartfelt and clever character-focused writing and perfectly fitting art, this full softcover collection of Heathen is a must-own for 2022. Be sure to grab a copy from your local comic shop today!

Inspiring, humorous, and brilliantly drawn, Heathen is a fantastically meaningful and entertaining comic series from beginning to end - and one of the most memorable takes on Norse mythology in recent memory.Series Review: HEATHEN - Find Brynhild, Save Father, Kick Odin's Ass