Dave Howlett’s THE MAKERS is one of the most joyful comic-reading experiences I have had in a while (and I am not the only one. Check out fellow MFR writer Zac Owens’ glowing review). Without saying much, THE MAKERS takes the origin of Image Comics and fictionalizes it…and then comes the Galaxy Quest-type twist! See, I bet that caught your attention!

I had the chance to shoot creator Dave Howlett some questions about his fantastic comic and he was gracious enough to answer them. So check out our chat below and make sure you get yourself a copy of THE MAKERS!

Monkeys Fighting Robots: First of all, thanks for taking the time to talk to us. How are you doing today? Working on anything?
Dave Howlett: No problem! Doing all right, working on a commissioned piece that is very involved but in a way that suits me just fine.

MFR: So what’s your comic book origin story. How and why did you get into comics?
DH: It’s a bit like the beginning of Goodfellas. “As far back as I can remember, I was always obsessed with comic books,” to paraphrase Henry Hill. My mom used to buy me those Spidey Super Stories comics that tied in with The Electric Company TV show when I was very young—which is a detail that tells you I’m now kinda old. But I don’t remember a time when I wasn’t obsessed with reading, and making comics.

MFR: Did you always want to create your own comics? Was there a specific moment or book that made you want to take that leap from fan to creator?
DH: I don’t remember a specific moment, but the urge was always there. It just seemed like a very accessible creative outlet, unlike, say, learning to play an instrument, or being good at sports. 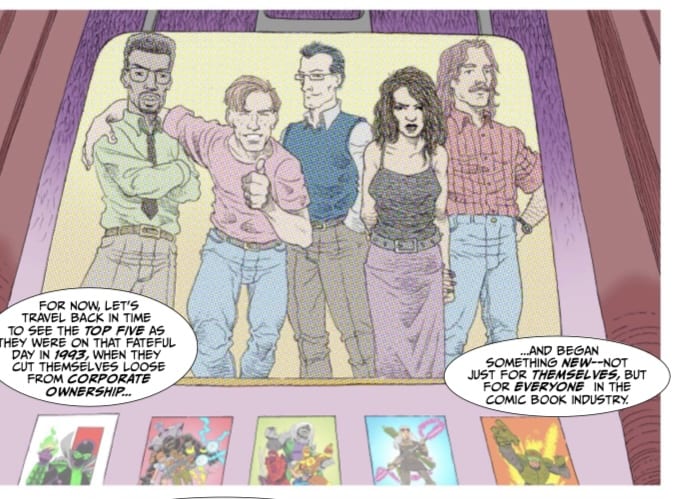 MFR: So for those who haven’t had the pleasure of reading The Makers, what’s your elevator pitch for the series?
DH: A group of comic creators who were superstars In the 1990s reunite 25 years later for a convention appearance, only to find themselves whisked away on a cosmic adventure. It’s like a fictionalized version of the history of Image Comics, crossed with a reality-bending intergalactic quest.

MFR: Was that sci-fi element always part of the story, or was this more of a traditional attempt to tell the ‘Image Story’ at first?
DH: At first it was going to be a more traditional 1990s period piece, but I thought I could jazz it up a bit and really explore the themes of creators and their creations, via a SF type approach. That type of story has always appealed to me, whether it’s in Frankenstein, or Preacher, or Star Trek: The Motion Picture.

MFR: Why do you think the ‘Image Comics’ story still interests people so much? It seems to really be resonating again for a lot of people in the comics community.
DH: Part of it is nostalgia—the 90s are back!—but part of it also the fact that something like that couldn’t happen again. The market conditions, the conditions creators were working in, and the rock-star status the Image founders had achieved, will probably never be duplicated. So it was a once-in-a-lifetime kind of perfect storm, one that’s maybe hard to convey to anyone who wasn’t around for it. But I had to try!

MFR: Who was your favorite Image founding father? And is it still the same? Or did it change over time?
DH: At the time it would have probably been either Todd McFarlane or Jim Lee, but now it’s definitely Erik Larsen. He’s the only one who truly committed to his book for life, and he’s still going strong today.

MFR: What about your favorite Image title/character?
DH: Savage Dragon for sure. I had read some of it before, but a few years back I acquired most of the run for very cheap and decided to complete it…I think I only need 9 issues now? It’s pretty fascinating to watch Larsen’s style and interests evolve over the decades.

MFR: What kind of research did you do, as far as the more ‘realistic’ aspects of the story?
DH: My research largely consisted of a pair of excellent documentaries—The Image Revolution, and the multi part SyFy doc So Much Damage. Sean Howe’s book Marvel Comics: The Untold Story filled in some gaps nicely regarding the Image founders’ split from Marvel, plus I was buying comics throughout that period, so I had a lot of memories of it to draw on.

MFR: Did any particular books or media help inspire this? I do get some Galaxy Quest vibes from the first issue and concept. This is a compliment because Galaxy Quest is one of my favorite movies!
DH: I love Galaxy Quest! That’s in the mix for sure, along with Terry Gilliam’s Time Bandits, and the flashback/flash-forward structure is straight outta Lost.

MFR: Did you always envision it as a 6 issue mini-series?
DH: I think so? Six issues made sense—five issues to individually spotlight the five Attitude Comics creators, and a final one to wrap up the story. I have a short attention span for my projects, so they’re always finite—I haven’t stumbled upon my own Savage Dragon yet, you know…something that I’d be happy to work on for the rest of my life. We’ll see.

MFR: Were you always gonna self-publish this? Did you ever maybe even think about pitching it to Image (laughs).
DH: I actually did submit it to Image! I never heard back, which is not surprising. I’m not sure it’s quite up to their standards. But self-publishing means total control over the final product, so that appealed to me too.

MFR: The printing on The Makers is fantastic. It feels like an older comic. What made you want to go with newsprint?
DH: Well, my friend and employer Calum Johnston, owner of Strange Adventures, was the one who wanted to go ahead and get it printed up, and he wanted to use a local printer who could do it up old school. Newsprint is of my era too, so that appealed to me. Modern comics are too slick! I just think the colour looks better on newsprint.

MFR: How did you create The Makers? Was this pencils and inks or digital? What was the creative process like?
DH: Pencils and inks for the line art, digital for the letters and colours. The digital stuff is good to learn, but I personally prefer the look of hand-lettered comics, so I’ll probably switch to that for whatever I do next. As for colours, maybe a mix of old and new school? We will see. 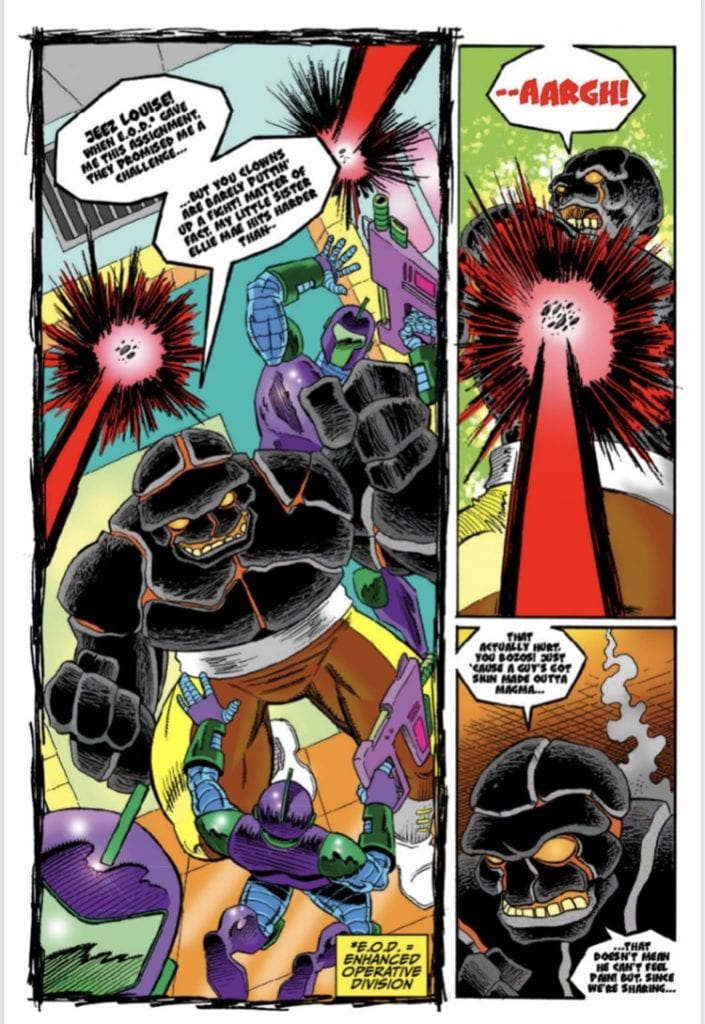 MFR: The Makers also has art from the ‘comics’ within the comic. What’s it like to use different styles in one book?
DH: I like the conceit, but it’s a lot to keep track of! Some artists like Rick Veitch and Jim Rugg seem to be able to try on different styles like they were ball caps, but I find I struggle with it a lot more. The colouring has had to do a lot of the heavy lifting, but, you know…your reach should always exceed your grasp. I had to give it a shot.

MFR: I also love the fake ads and ‘Bullpen Bulletin’ type pages in the book. Was this a detail you wanted to include from the beginning?
DH: Oh, most definitely. 1963 by Alan Moore, Rick Veitch, Steve Bissette, Dave Gibbons, and Don Simpson is one of my favourite series, and they really nailed the whole package with the fake ads, letters pages, Bullpen Bulletins-type stuff…each issue of The Makers has at least one sorta “artifact” page along those lines to try to immerse you in the world of it. I would have liked to have done a bunch, but there are only so many hours in the day, you know?

MFR: Have you or will you send this to any of the creators that influenced the story?
DH: Probably not? We’ll see. I mean, they all definitely influenced a lot of aspects of the characters, but I don’t want to give anyone the impression that it’s 100% based on anyone real.

MFR: Is there a story beyond these 6 issues? or will this be it?
DH: Nah, this is it for now. It’ll have a finite conclusion, and I don’t have any ideas for it beyond that. Honestly, it’s been such a big undertaking that I’m really itching to work on something different. But never say never!

MFR: love your Bob The Goon mini-comic. Any chance for more Bob stories?
DH: At least one more idea! I’ve always had a fondness for the character, and the actor who plays him, Tracey Walter. He’s just one of those “that guy” type of character actors, who turns up in everything. He’s great in Repo Man. But then again, he’s always great. Poor Bob. So loyal to the Joker, and look where it got him.

MFR: What else are you working on?
DH: I’m doing the art for a five-part series called The Last Paper Route that my pals Sean Jordan and Alex Kennedy wrote—it’s a comedic series about a couple of paperboys having misadventures in the 1990s. See? Something in the zeitgeist these days. Other than that, I’ve been trying to use Instagram for different types of comics and strips—there are some interesting possibilities there. I’ve done a bunch featuring a character called The Hashtag, who’s kind of like my take on faceless detective characters like The Question and Rorschach. He makes for good little one-panel comics. I’m still trying to figure out what my next long form series will be.

MFR: Where can people find you and your work?
DH: My comics (including digital versions of the first four issues, and the print edition of issue one) are up for sale on Gumroad (https://gumroad.com/paskettiwestern), and I’m usually posting stuff on Instagram a lot (people can find me at @paskettiwestern). I have that handle on Twitter too but I don’t use it much, because that place is a bit of a…I don’t want to say hellscape, but I don’t know what else to call it.

MFR: I really loved the autobiography short ROASTED at the end of issue 1. Will there be more of this?
DH: For sure! I have a three-pager going into the print edition of issue 2, and probably some more down the line. Like I said, I wish all the backup stuff could have been in-world type material, but I was getting stretched too thin so I thought I would just pilfer my archives (most of that stuff has been on my IG account in the past). 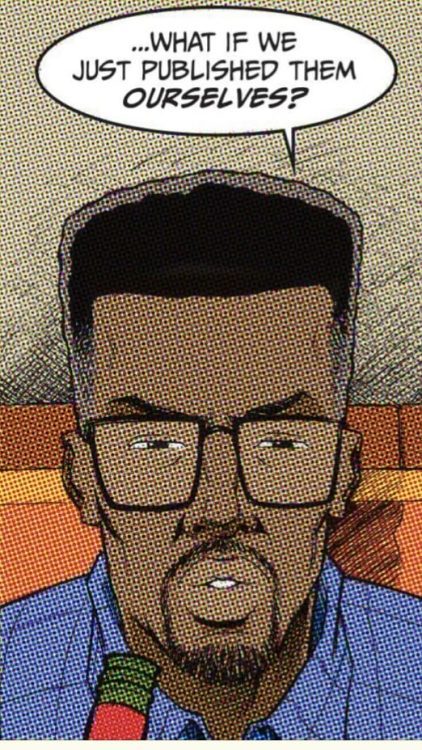