REVIEW: Howlett’s THE MAKERS is More Than Your Average Homage

Paskettiwestern Productions’ The Makers could have just been a run-of-the-mill homage to comics. Instead, series writer, artist, colorist, and letterer Dave Howlett decides to go a step further. When most series would throw in a character or two that are clearly inspired by other works and call it a day, Howlett dives deep into the business and personalities behind the comic book industry.

There’s no doubt Howlett loves comics. And his passion for the medium is clear on every page. Whether it’s his excited discussion of creator-ownership or his comics-within-comics that pay tribute to the classics, The Makers is full of enthusiasm. Yet, Howlett also isn’t afraid of shining a light on some of the dirty parts of the industry. His character “Amiable” Art Fine represents the big business tycoons that gladly profit off of an artist’s hard work, without giving artists their due. Though, it’s funny that this is what Art Fine represents because Howlett still makes the guy kind of likable. He’s a shyster you’d like to grab a drink with. A whole other review could be written just about the comics-within-comics in The Makers. Howlett’s own version of Spawn, Captain America, The Fantastic Four only appear briefly, but they feel fleshed out and unique enough that you wish you could read the whole series in Howlett’s voice. It’s worth noting that half of these characters Howlett recreates are from the big industry he’s critiquing. In doing this, Howlett adds another layer to the discussion. He says, “Alright, there are problems with their business models and ethics, but that doesn’t mean they haven’t given us some of the characters we love the most.”

When you read the first few pages of The Makers, you might assume you get Howlett’s art style. It’s a familiar one. Thin lines, lots of details, it has a grittiness to it. But Howlett refuses to be put in a box. Only a couple pages later, and you see pages with a completely different art style. Crisp, clean, thick lines that look like something out of the Silver Age. Every comic that makes an appearance in The Makers has its own style—a style you’ve seen in stories like it. 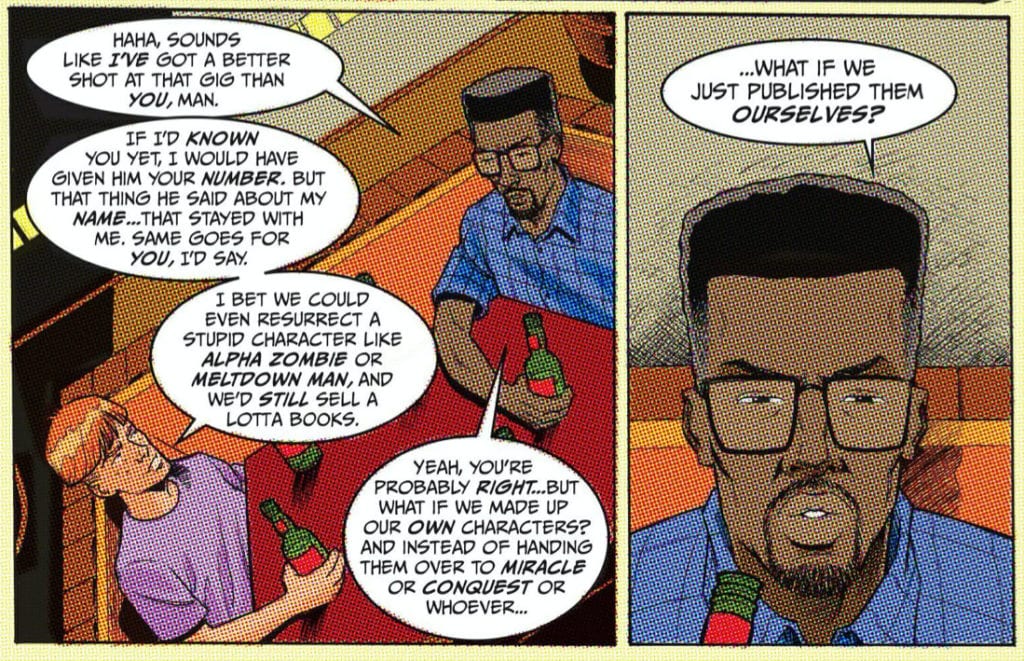 Howlett’s ability to tap into artistic tropes, while also celebrating their visual storytelling, is both exciting and astounding. It’s in his art, most of all, that we see Howlett’s love for the medium. This is a world he’s lived in for a long time, one he’s familiar with. We know this because, with every new comic he presents, his art feels familiar as the comics where Howlett first found these styles of storytelling.

Howlett’s changing artistic style bleeds into his coloring. His modern-day scenes, set in the real world instead of the world of comics, are often washed out and a little grim. It’s here that we see these characters aren’t as put together as their press would suggest. They look pale, and like they’re trying to keep it together. But when we jump back to 1991, things seem more colorful. The Ben-Day dots that Howlett uses to color those scenes makes it feel like art is everywhere. It’s not just a day job for these artists; it’s a way of life.

And every new comic Howlett presents has a new color scheme that immediately fills us in on the world we’re presented with. Hellfire is colored with a funky green and purple, over a realistic background, showing us how out of place the character feels. Cinder’s comic is colored in undeniably 90’s fashion. Sergeant Infinity is full of red shadows, giving every scene a flair for the dramatic.

Howlett’s lettering for this series is a play-by-play of old comics’ tropes, and it’s incredible. With the parody/homage comics he’s inserted into the plot, he has lots of fun. First, whenever a new character enters the fray, their name is written in a different font. It’s a little nod to when comics do that to advertise their other series, creating brand recognition. And of course, Howlett has fun playing lines from different scenes off of one another.

When Chuck Tolliver is chatting with Josh Armstrong, back in ’91, he says, “…But it’s just that, for me, the same old, same old seems to be somebody else’s same old, same old.” Howlett puts this word balloon in the right-hand bottom corner of the page, so when we jump back to the present day, it’s the last thing we’ve seen. And in the present day, right in the middle of the page, the first thing our eyes see, Tolliver’s looking out into space saying, “Well, that sure is different.” It’s a great joke that works because Howlett makes sure we see a one-word balloon after the other in quick succession.

If you love comics, then you’re Dave Howlett’s kind of person. His series, The Makers from Paskettiwestern Productions, is a celebration of comics like no other. It doesn’t just celebrate the surface level, it celebrates the nuts and bolts, and it has fun doing it. Get your online copy of The Makers (issues 1-3 are out now) here!