Review: A Classic Villain Is Given a New Mask In YEAR OF THE VILLAIN: BLACK MASK #1

Have you ever wanted the power to wear any face like a mask? If so, what would you do? Become a kingpin? Return as the king of the underworld? Gain money and power? Or would build an empire and shape the course of history? This being one of many questions Black Mask has to answer in DC Comics’ Year of The Villain: Black Mask #1, out this week (check your local comic book store).

Black Mask was originally introduced in 1985 but hasn’t been seen around as often as other Bat-villains. He has been lucky enough to be included in multiple media formats, but never in the forefront as the others in the Dark Knight’s rogue gallery. Funny enough he is known more for his run ins with Catwoman in Ed Brubaker and Cameron Stewart’s amazing Catwoman series.

Having been portrayed throughout his comic history as a ruthless crime lord who loves torture as much as masks, he has never been anything more than a normal human. That character trait changes with Tom Taylor’s Year of The Villain: Black Mask #1. Although it’s labeled as a Year of The Villain tie-in no info for the event is needed, other than Lex can give other powers. 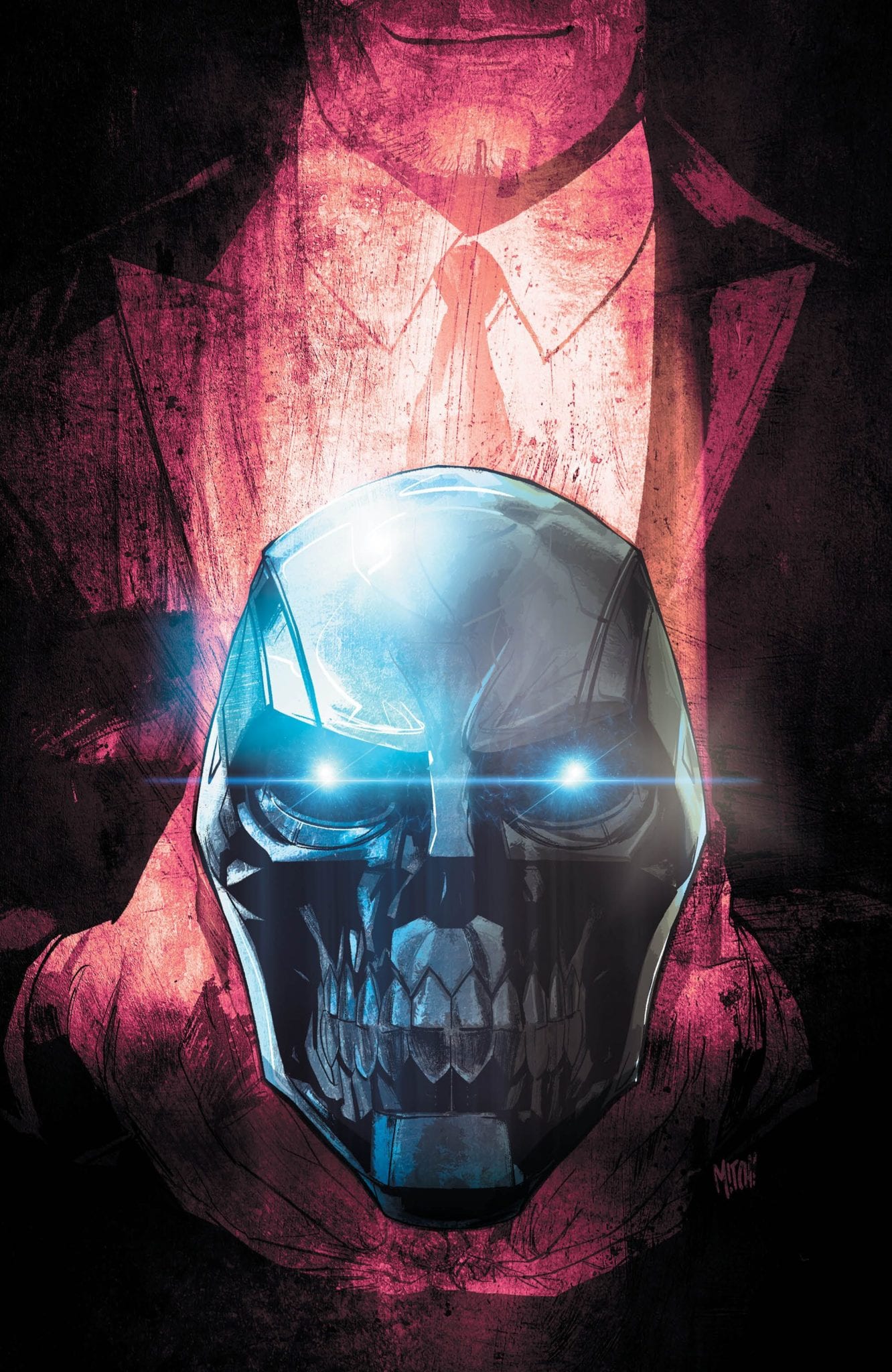 Having Black Mask #1 act as a tie-in while having it essentially a stand alone works to it’s benefit for readers interested in said character. This shows DC’s great marketing strategy with the Birds of Prey movie releasing next year with Black Mask as the villain. This movie will mark his live-action debut while also marking Renee Montoya debut, who DC has also pushed lately.

Dedicating the first nine pages as a retelling of Black Mask’s history, Taylor gives the audience a quick backstory so they learn what is needed without having to read other stories. This retelling is told from none other than Black Mask as he holds a bank teller hostage. Taylor could have easily made this opening boring, but instead played it off with Black Mask wanting to finally talk to someone; so why not tell you origin? With the backstory for newcomers done we make our way to the Year of The Villains aspect, enter Lex Luthor.

Helping Black Mask escape from the bank Lex promises him whatever he desires, as long as he takes power from Lex. What best to go with a mask obsessed villain than the power to change your face? As great as this power is it’s never defined how it works. Is it like One Piece’s Bon Kurei where he needs to first touch the person? Or like the dozen other shapeshifters where he just needs to see a picture? 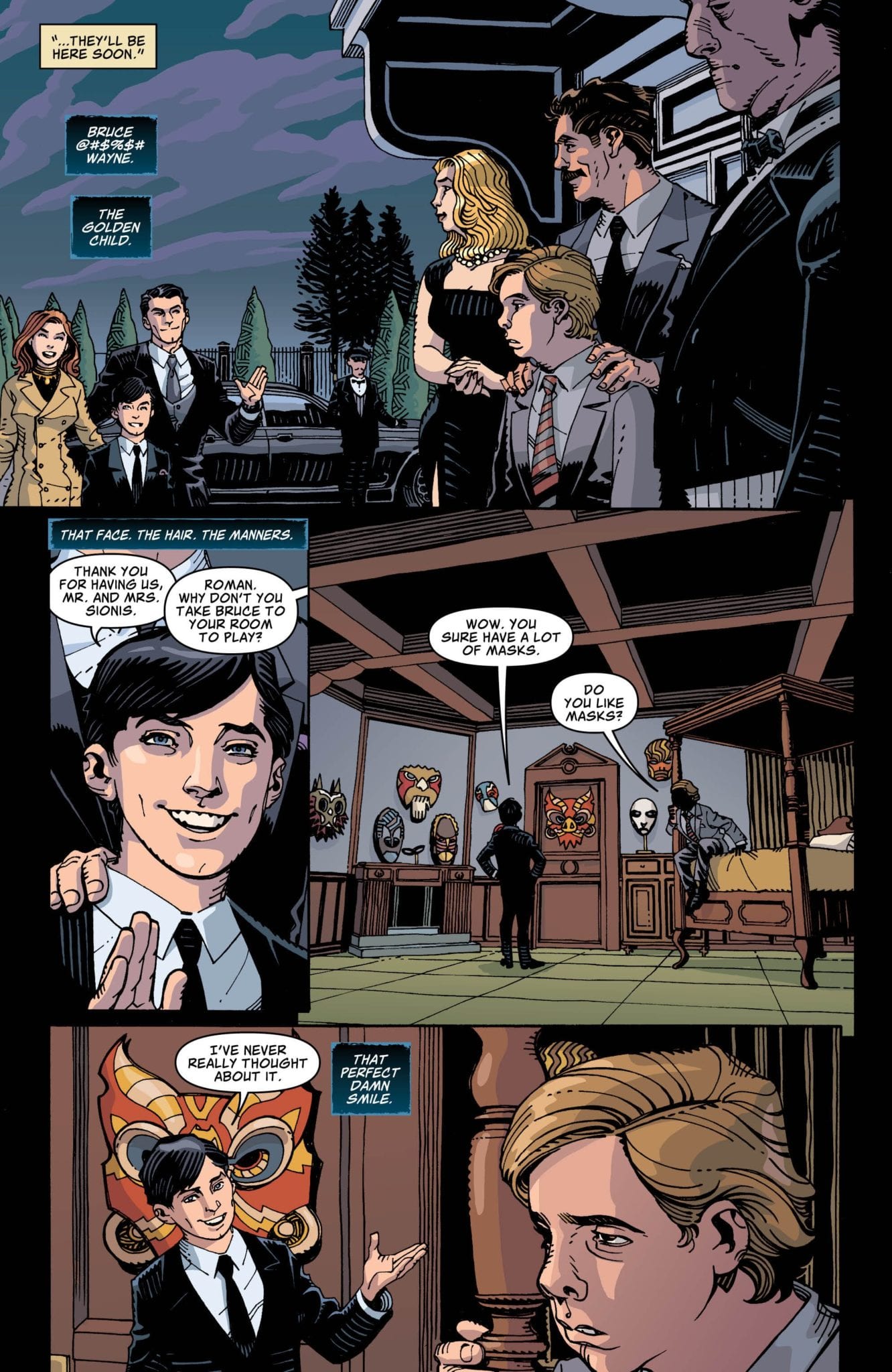 Besides the question of how his powers works, Taylor crafts a superb new origin story that builds upon Black Masks history while making him more accessible. While the issue is titled after Black Mask it features a heavy dose of Batwoman teaming with Renee Montoya. As previously stated DC has been pushing Montoya often lately, but this works out for the best in most cases. As did Lois Lane having Montoya team up with her, the same concept applied here is a smart idea to bring to the public’s eye. On the subject of eye’s, how about that art?

On a visual level Black Mask #1 comes off as an adult cartoon turned into a comic with pencils by Cully Hamner. This style gels quite well with the story being told but wasn’t as such from the get-go. For Black Masks flashback of his younger years he has a misshapen face, at first you think this is done on purpose, but once young Bruce comes into panel he looks the same. It’s not story breaking, but it’s very noticeable when one side of a character’s face is slumping down like melted butter.

This face slumping happens a few more times in the present but nothing as jarring as the last segment. The rest of the pencils look great with Hamner making great use of paneling for dialogue and in a few action sequences, well that is true except one instance. Although it is drawn quite well and has a smart use of coloring in the panel, there is a slap scene early on that seems to break the laws of physics. 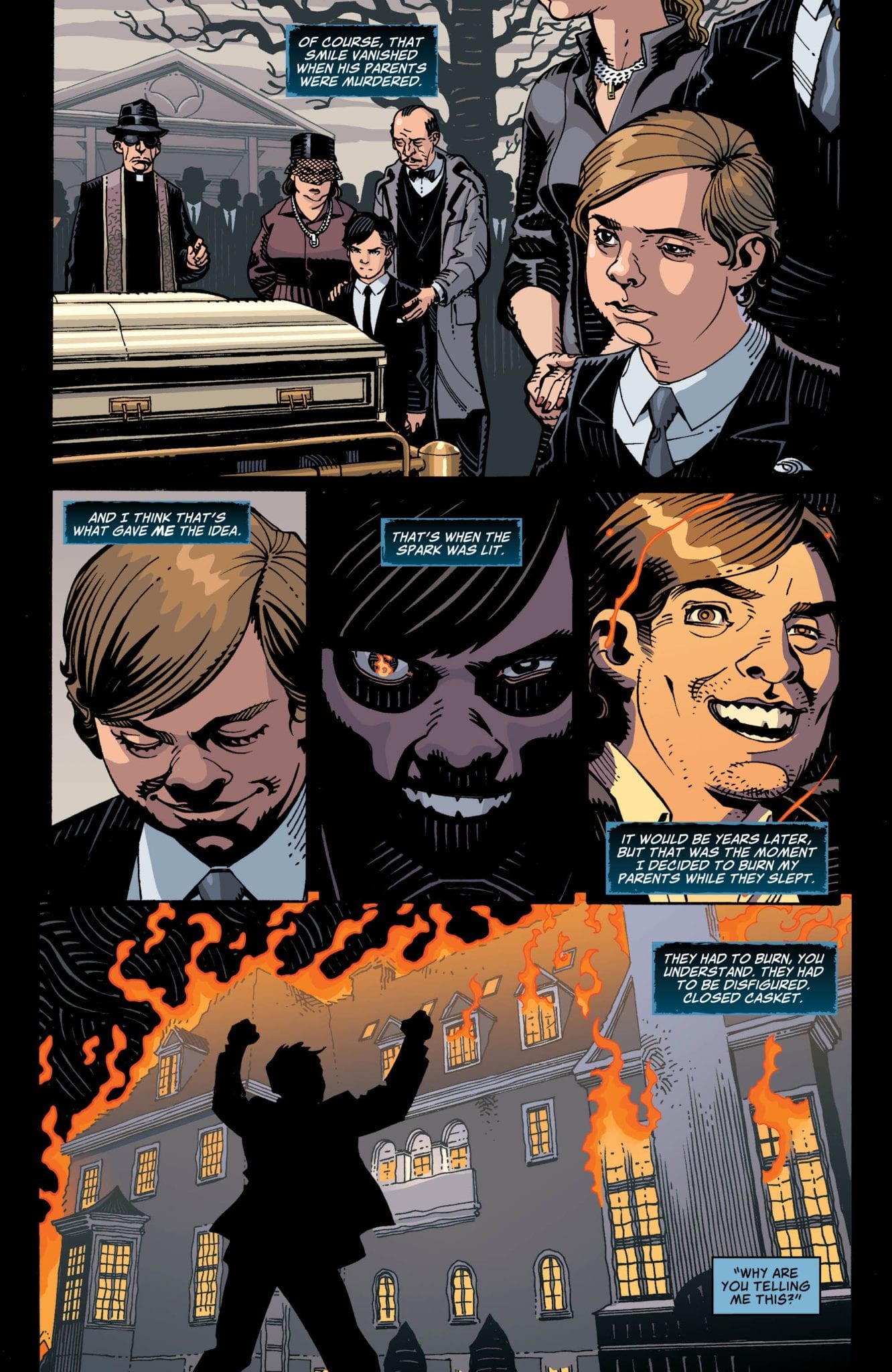 Yes comics can break this law (and others), but that’s for those with powers; in this case, it’s Black Masks father (Richard Sionis). Angry at his son he lashes out with a slap so forceful the colors of the panel turn black and red, thanks to Dave Stewart’s stimulating emotions with colors. Richard smacks Roman (Black Mask) with his left hand moving right to left connecting violently to Roman’s left side face.

If you’re visualizing this you’re probably thinking Roman’s head would turn to the right as he falls. That would be how it should happen, but sadly it doesn’t, instead his head (and body) flies to the left making no sense. This is a minor problem in what was otherwise a well-drawn issue, plus this physics breaking has occurred in comics before.

Helping emphasize on certain scenes and emotions is Stewart’s fantastic eye catching colors that are bright and lively when needed and dark somber moods in others. Stewart’s colors hammer home the smack Roman receives (even with the physics problems already said) and the loud BANG that fills the panel when Black Mask shoots a gun.

Taylor writes a great Black Mask, granted it would have been nice to see his brutal torture methods he’s famous for but the story being told didn’t warrant that. As great as the Black Mask moments are the Batwoman and Montoya moments outshine the titular character. The two heroes have a great chemistry that Taylor and team play upon making it a blast anytime they are together.

Memorable Quote: “Well, that’s dark. But to each their own.” – Lex Luthor

Dear Reader Behind The Mask

If your now joining in on DC’s Year of The Villain then check out some coverage from the beginning of the year to catch yourself up! Or if your a newcomer interested in Black Mask or a fan already caught up that wants to read this Bat-tastic issue then check your local comic store!