X-O MANOWAR #2, available from Valiant Entertainment on November 25th, brings Aric face-to-face with the consequences of superheroes intervening in global conflicts. Dennis “Hopeless” Hallum’s story is equal parts robot smashing and social conundrum, and it proves to be this reviewer’s pick of the week.

Christian Ward’s painting of Aric striking a powerful pose is a strong cover. Aric stands out against the swirling cosmos, ready for battle. His fiery sword quickly captures the reader’s attention, but the cover lacks movement or energy. Otherwise, it’s a gorgeous cover.

Whew! This book’s been on hiatus for eight months, so I admit I had to go back to re-read issue #1 to remember what’s going on (read the MFR review of X-O Manowar #1 here). A robot accosts Aric while he flies in to stop a warzone battle in Ukraine. Issue #2 picks right up with Aric’s battle with the robot, only to learn the robot is a lure for a potentially more dangerous enemy …or is it an ally? 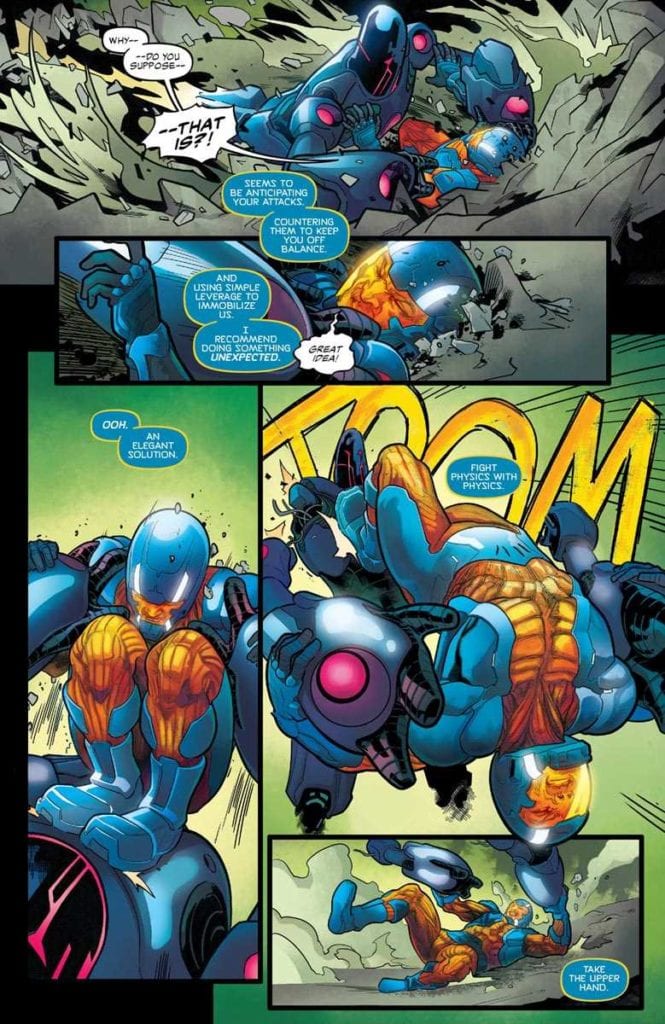 Hallum wisely toned down the fish-out-of-water elements from the first issue to focus on Aric’s obvious strengths while fighting battles on multiple fronts. Ultimately, Aric is confronted with the dilemma of choosing to interfere in human conflict to save lives versus non-interference in the natural evolution of governmental conflict. While not necessarily original, Hallum’s presentation of this dilemma takes this title to a deeper level of interest. 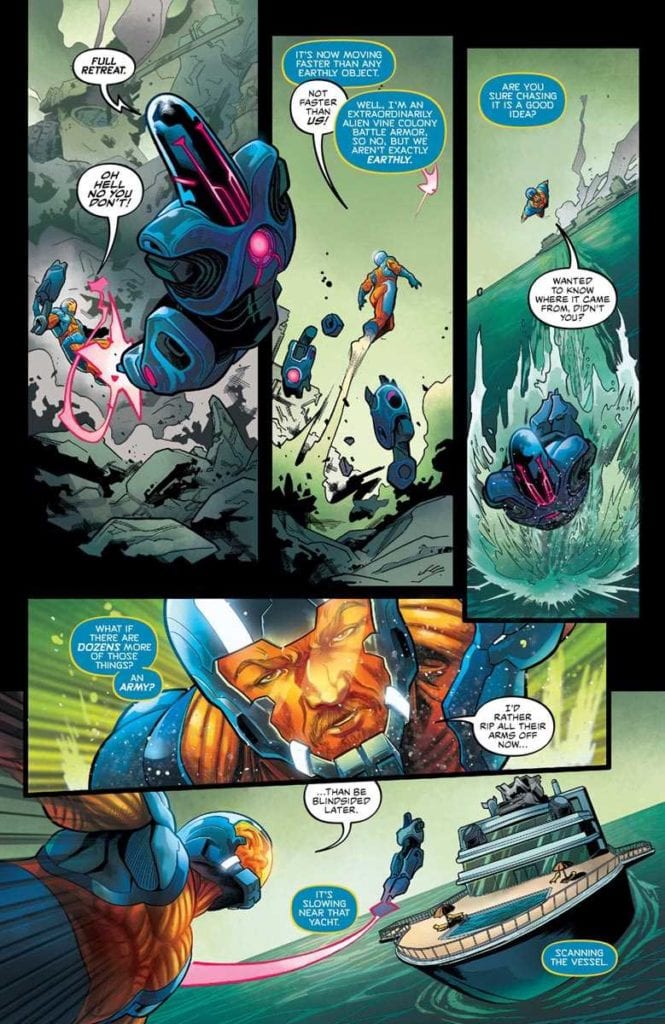 The story is well-paced, the action is exciting, and the arrival of the villain(s) and their “offer” makes for a mature and dramatic sophomore issue in the series.

One of the main critiques from issue #1 was the claustrophobic panel design mixed with the rough art style. You couldn’t tell what was going on in some of the panels.

I’m pleased to report this issue has significantly better art. Emilio Laiso stepped up big time with more splash pages and full-length panels to let the art breathe when it needed it. Penciling and inking are more precise and detailed. I get a much better sense of what’s going on, even in the smaller panels. 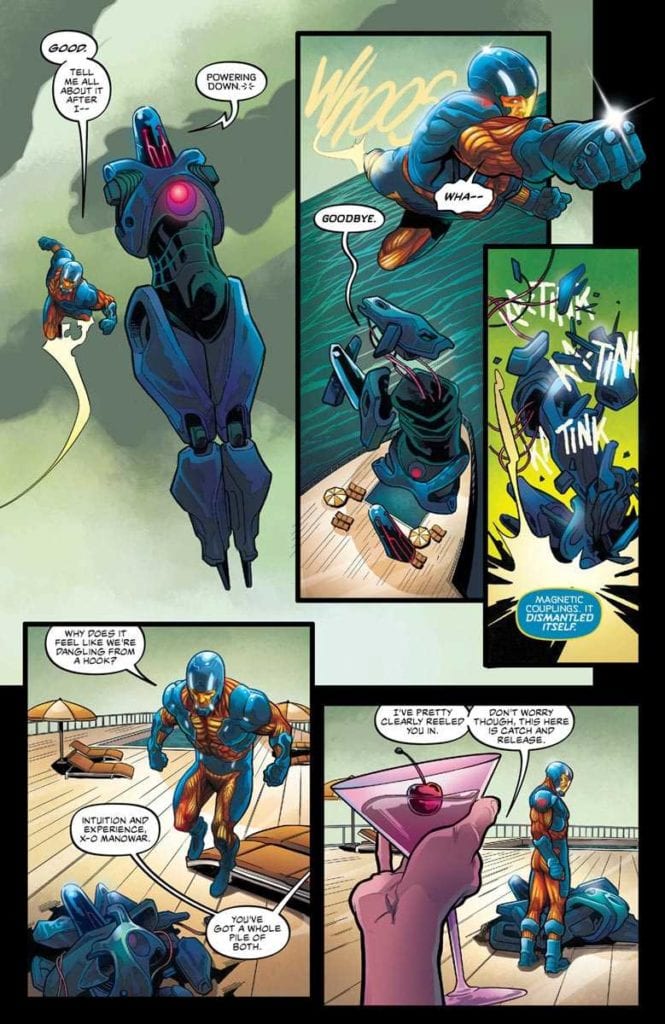 It’s not just the skill that’s improved, but the visual storytelling is bigger and more epic. The opening fight sequence is hard-hitting, and the secondary attack by [REDACTED] is big enough to impress on you the horror of what’s happening. Laiso made this issue superior in every way to its predecessor.

Ruth Redmond is the master of pop with this issue. Every panel that shows Aric in armor is bold. His golden armor highlights stand out to imply power. The boldest highlight comes during the explosion scenes near the end of the book where Aric is drenched with scorching flames as he howls in anger over the attack. It’s an impressive display by Redmond.

Hassan Otsmane-Elhaou completes this issue’s fine artwork with loud, ragged paint strokes to depict the BOOM’s of the final explosion. It’s messy, ugly, and loud… just as an explosion should be—excellent lettering work here by Otsmane-Elhaou.

X-O MANOWAR #2, available from Valiant Entertainment on November 25th, improves on the first issue by magnitudes with better art, more thoughtful storytelling, an enigmatic villain (or ally?), and a strong moral dilemma for our hero. This is my highest recommended book of the week.

X-O MANOWAR #2 improves on the first issue by magnitudes with better art, more thoughtful storytelling, an enigmatic villain (or ally?), and a strong moral dilemma for our hero. This is my highest recommended book of the week.Review: X-O MANOWAR #2 Wrestles Robots And Reality