Writer Dennis “Hopeless” Hallum has crafted a fun fish-out-of-water story to restart one of Valiant’s headlining characters. Right from the start, you’re introduced to Aric, a 4th-century Visigoth, who returns to Earth after centuries in captivity with an alien race called the Vine. During his time away, Aric is bonded with a powerful super-suit run by an advanced AI that can access all Earth communications and stores of knowledge to bring the hero up to speed.

It’s a brisk 20 pages that showcases everything from a space battle to a basketball game that goes comically wrong to the accidental destruction of a neighbor’s car. Where the dialog really shines is the internalized interaction between Aric and his suit’s AI, Shanhara. Shanhara directs Aric to trouble spots and fills in his knowledge gaps about modern life. They bicker like an old married couple, which works to keep the tone light most of the time.

Where the story falters slightly is in the inconsistencies with Aric’s assimilation into modern Earth life. He recognizes stinger missiles and assorted types of firearms, but doesn’t know the purpose of a wrench. It’s a small quibble, but there are several examples peppered throughout the issue that pull you out of the story briefly.

Lastly, the issue opens up several questions that are not answered by issue’s end in order to keep you invested and interested in the story. Questions related to backstory (e.g How did he lose his left hand? How did Aric make it back to Earth?), and questions that presumably are setup for future issues (e.g. Who was the evil scientist? How does he know Aric? What’s with the evil killbot?). I’m interested to see how and when these questions are eventually answered.

The issue is jam-packed with panels by Emilio Laiso, and that is both the highlight and the shortcoming of this first issue. Ruth Redmond’s colors are bright, the characters are distinctive, and nearly every inch of space is filled with action. It’s a visually engaging issue. However, some pages are overstuffed with panels so much that it’s difficult to make out what’s going on. Most of the panels seem to be locked in constant close-up mode, making every scene feel small. Several of the bigger action scenes would work better if they weren’t crowded out by surrounding (overlapping) panels and the artist had pulled back to give a wider picture of what’s going on. Give the scene more room to feel big. 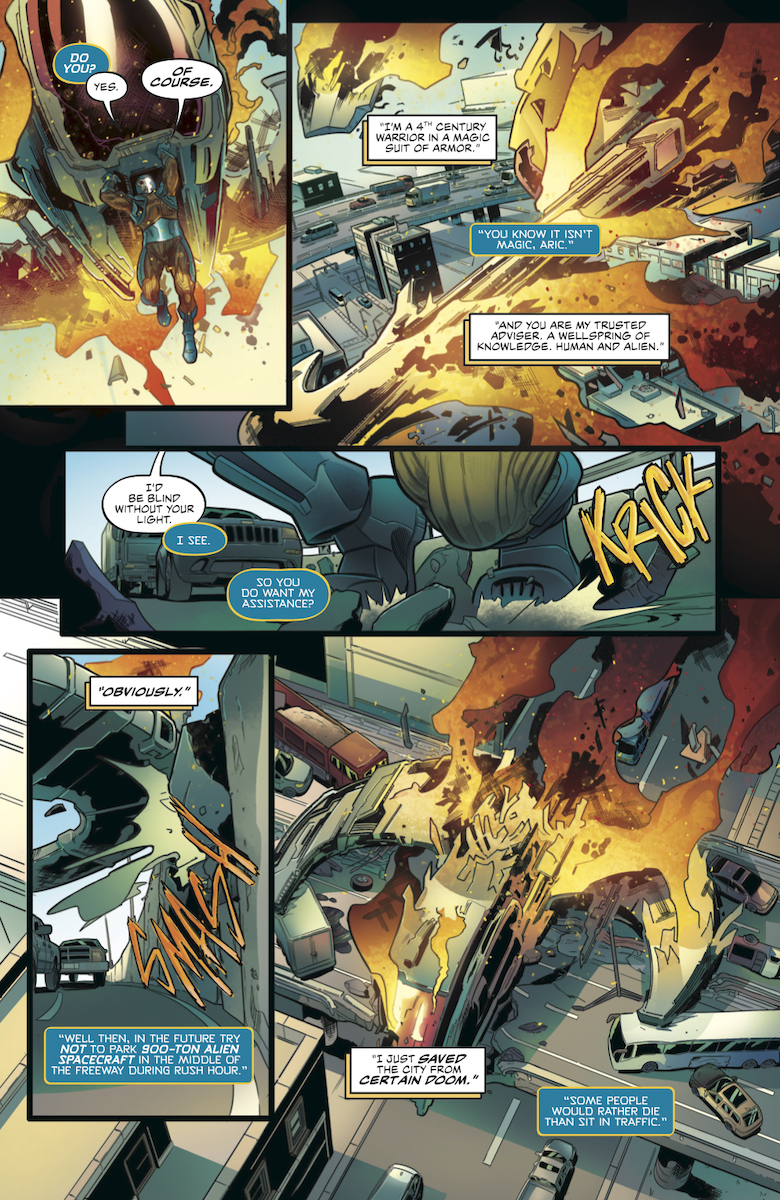 Otsmane-Elhaou did a remarkable job with the lettering by balancing the external conversations with the internal dialog and (in one case) translating an alien language. Through it all, the lettering remained clear and easy to follow.

X-O MANOWAR #1 is a well-written start for a new reader interested in Aric’s adventures. The story is full of action without taking itself too seriously, and the interaction between Aric and his suit’s AI carry the story through. The art is visually interesting even if the perspective and overlapping panels make several pages feel muddled and small. It’s worth picking up.

A nearly perfect restart to the adventures of Aric and SanharaReview: X-O MANOWAR #1 Delivers Great Pacing To Restart The Series