The X-Men and Fantastic Four are able to make short work of Doom’s sentinels (or “Latviathans” as he calls them…for some reason) thanks largely to Franklin Richards’ choice to sacrifice his chance to fix his powers in order to save the day.

While a future threat from Dr. Doom is teased, the most unnerving part, and the true menace, comes at the end of the book, when Xavier and Magneto visit Reed. When Reed tries to apologize, Xavier and Magneto cut him short, telling him that his apologies are not enough. He has crossed a line. Xavier removes the knowledge of how to build the mutant gene suppression device from Reed’s mind and lets him know that unlike what he would’ve done in the past, he wants Reed to remember what Xavier did. There are no rules now, and Reed can’t just do whatever he wants anymore. He is told, “Welcome to the new world.”

While the Dr. Doom part of this story was fine enough, and I hope they follow it up, Doom’s involvement serves as something of a pretext for this story to happen to flesh out the conflict between the X-Men and the FF over Franklin’s fate. Also, thanks to Reed’s choice to invent a device to suppress his own son’s mutant gene, it brings Reed into conflict with Xavier and Magneto, further underlying the subtle menace that appears to be hiding just under the surface of Xavier’s attitude and actions in this new X-era. While his actions are those of a man who is fed up with the oppression of his people and are in that light understandable, something still feels off about him. Guess we’ll have to wait and see. 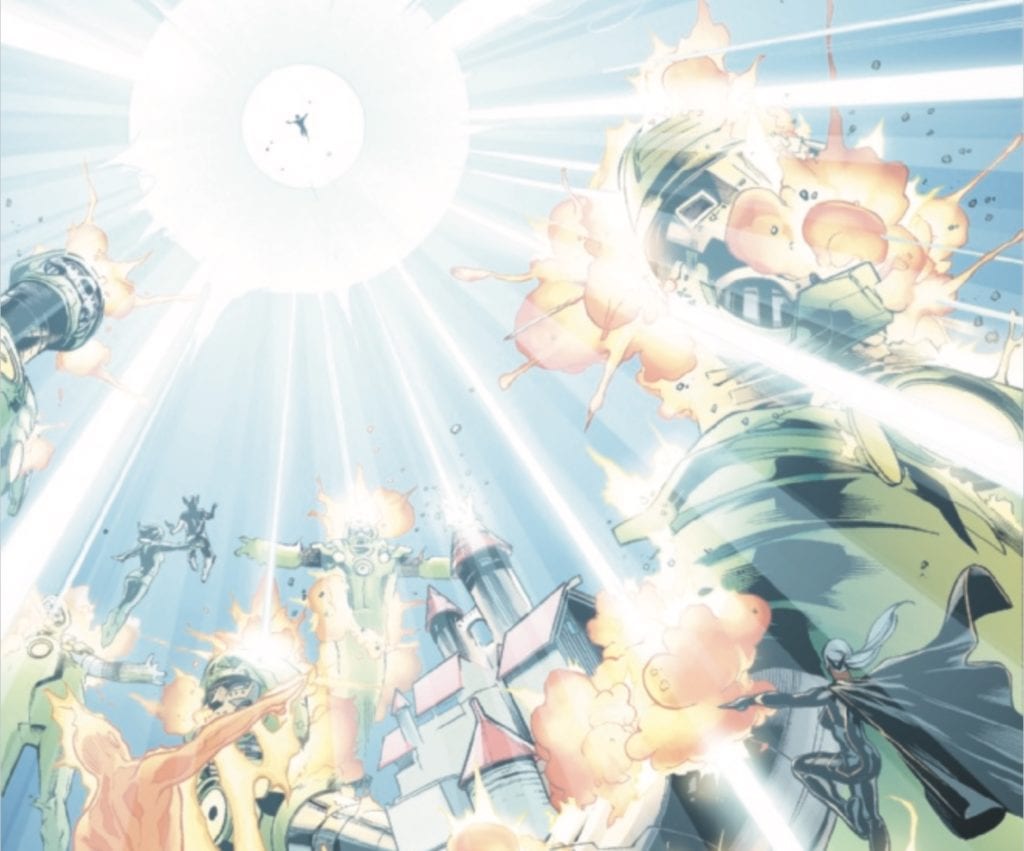 Kate had been recruited to gain Franklin’s trust because of a shared history. My fear had been that that relationship would get betrayed and tainted in this series, but I think this scene communicates the purity of the trust and the bond between these characters. And Franklin immediately puts that trust to good use!

One of the other character moments in the book is a bit more menacing. When Xavier takes off the helmet, you know it’s not going to be good. 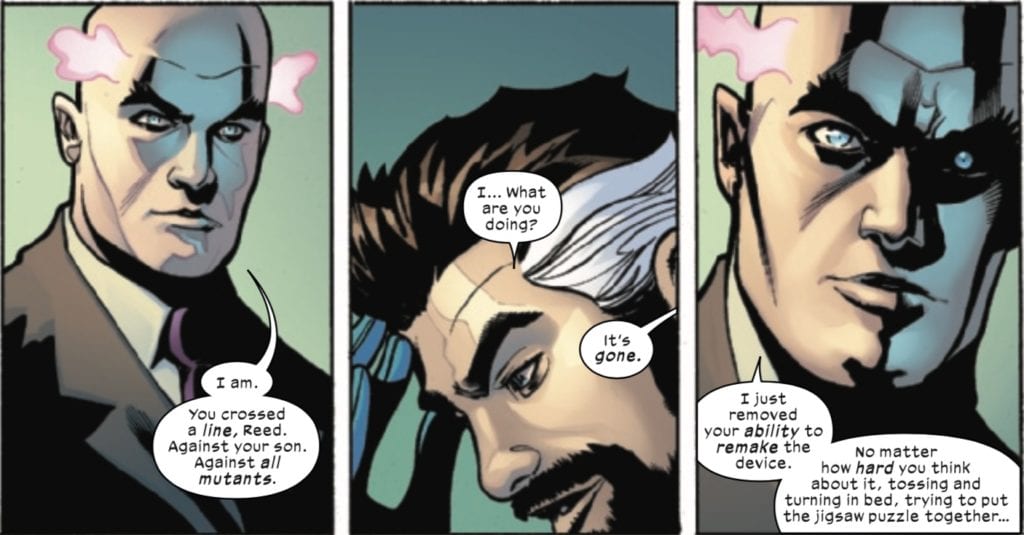 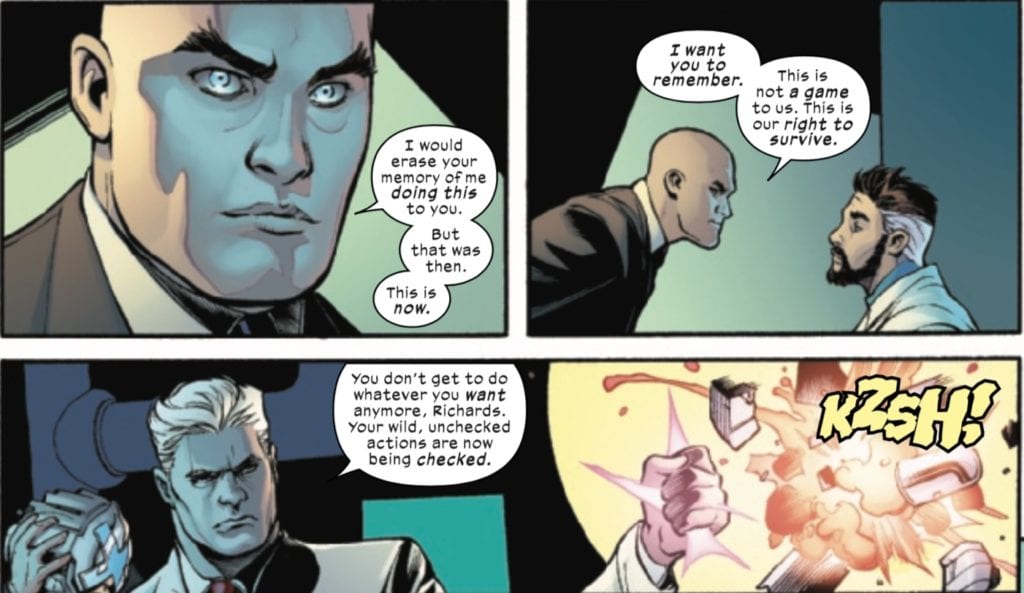 There’s something a bit unsettling about a Xavier/Magneto team working with such harmony. Add to that the glassy-eyed way Xavier is drawn and the smug, indignant look on his face, and we are left with a Xavier that is much menacing, and one that maybe we should be afraid of.

Martin’s colors are beautiful! I particularly like the way she captures the translucent nature of Franklin’s powers. There’s actually a lot of that type of coloring in this issue. The force field Doom places around himself and Franklin is also well-colored. 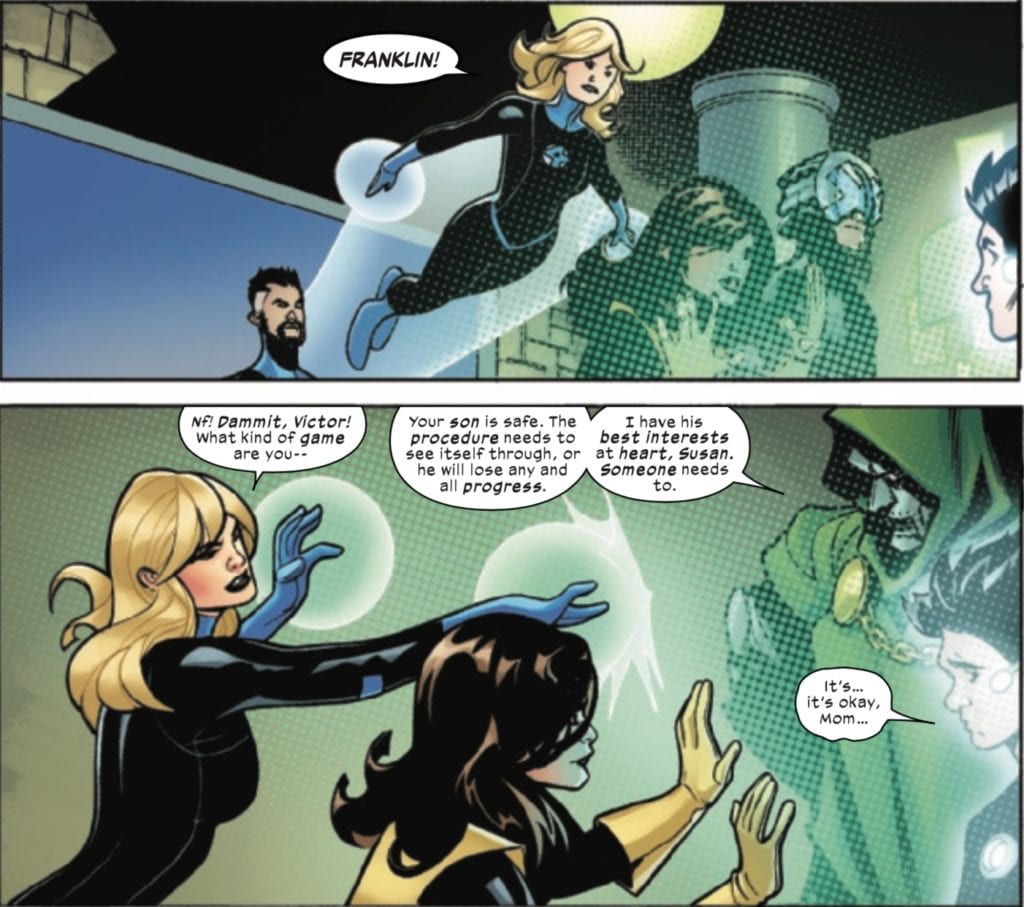 There’s a lot of subtle coloring in this panel. Not only do you have the force field and Franklin’s powers manifesting themselves, but the Invisible Woman’s force fields also have to be colored in as well. Martin captures all of these subtleties of powers and technology and makes them all stand out.

The prose sections of these X-titles allow for an extra dose of creativity by the letterers. This issue is no exception. These prose sections don’t always simply provide exposition and information to the reader, but the form of the page can contribute to the story as well. In this case, the prose page shows Xavier’s mindwipe of Reed’s mutant suppression device via the mechanism of the prose section.

You can see how Caramagna portrays the erasure of the device from Reed’s mind, with the final page itself being blank. Caramagna should get credit here for how much his lettering contributes to the fleshing out of the final part of this issue.

So Franklin is now permitted to go to Krakoa, and the X-Men and the Fantastic Four are at peace again (minus a fairly significant mindwipe). It will be interesting to see how these two teams continue to interact moving forward and what future conflicts may arise over Franklin and his currently dwindling powers. Also, let’s not forget that Dr. Doom is still out there, and now has a chip on his shoulder against Krakoa as well. I don’t this is the last time we’ll see a heated engagement between Krakoa and Marvel’s First Family!

What did you think of the X-Men/Fantastic Four series? Tell us in the comments below!

X-Men/Fantastic Four #4 brings the mini-series to a close, resolving Franklin Richards' status as a Krakoan citizen (for now), but not without establishing an underlying sense of menace.Review: X-MEN/FANTASTIC FOUR #4 - Welcome to the New World