On August 12, Marvel Comics released X-Force #11. Exploring some of the fallout from his Wolverine series, writer Benjamin Percy is joined by artist Bazaldua, colorist Guru-eFX, and letterer VC’s Joe Caramagna.

One advantage of having the same writer writing multiple titles is the ease with which they can cross-pollinate between those titles. Picking up on the events from Wolverine #3, the issue opens with an autopsy of the Russian supersoldiers Wolverine and the Marauders encountered in that issue, only to discover these supersoldiers are far deadlier than they first appeared, with a violent twist on the Russian Nesting Doll. Meanwhile, Colossus struggles with his reluctance to become an active combatant again, all while showing that deep down, he’s still a hero.

Also, while the X of Swords event isn’t supposed to drop until the Fall, this title appears to plant some seeds leading up to the event as readers learn that the latest attack on Krakoa is an attempt to retrieve “the Sword of Cerebro.” And, of course, in what has become an X-Force tradition, Quentire Quire gets gruesomely killed, although not before we find out he’s sleeping with one of the Cuckoos (wonder how that’s going to go over with Cable?).

For those who might’ve been expecting a fight between Colossus and Omega Red, you might be disappointed. Dustin Weaver and Edgar Delgado’s cover is well-drawn but doesn’t quite reflect the contents inside. However, given that the X-books, mainly Percy’s, are focusing on an escalating conflict between Russia and Krakoa, and it is hinted at that the mutant nation might’ve been betrayed from within, the cover may foreshadow a potential future conflict between Colossus and Omega Red.

The art team does a good job highlighting the menace of the Russian supersoldiers. Bazaldua and Guru-eFX’s depiction of even the dead soldiers makes them look more menacing than they appeared in Wolverine #3.

The art and coloring make their body armor, and even their (dead) faces appear more menacing than they did in Wolverine.

One great collaboration on the art team happens when Kid-Omega is killed. The scene is set up wonderfully, with Quentin’s contentment being established only to have it violently interrupted. 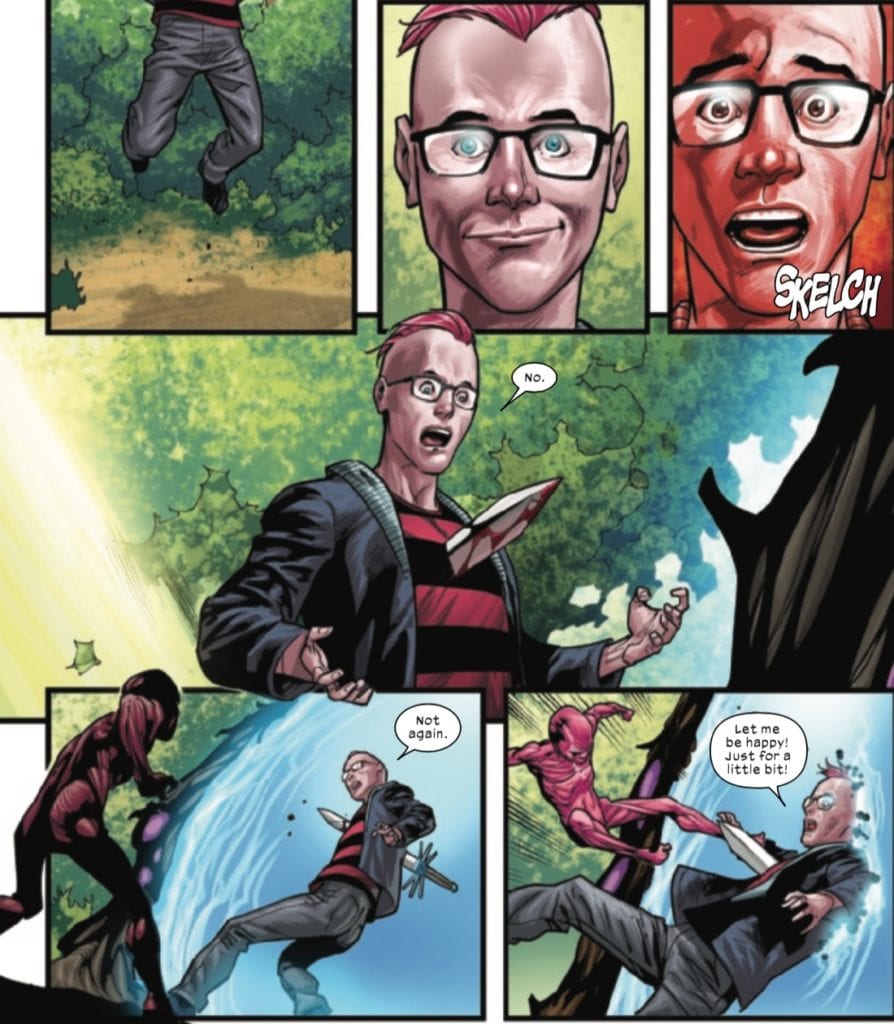 There are several things that work about this sequence, not the least of which is the clever means by which Quentin’s death furthers the plot, since the Russian agents can’t get through the Krakoan gates, and so couldn’t escape with the sword. Killing Quentin and pushing him through, however, accomplishes just that.

In terms of its execution, seeing Quentin’s contentment give way to shock in the splash of red (along with the stabbing sound effect) conveys the gruesomeness of the situation, while still being able to be played for laughs…albeit very dark laughs.

Caramagna’s letters are on point in this issue. Very early on, his letters help establish the impending danger facing Krakoa in this issue, in a scene that’s quite Alien-esque. 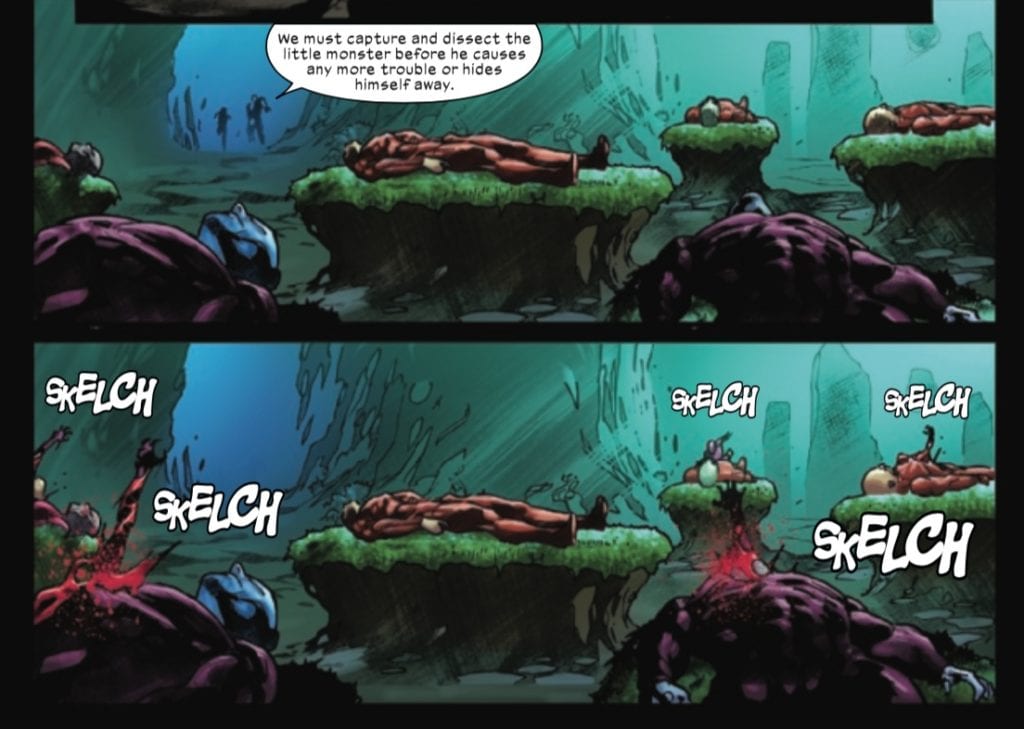 That movement from the silence of the dead to the chest-bursting Russian supersoldiers creates a very palpable “oh shit!” moment that sets the tone for the entire issue. And you couldn’t get that without “SKELCH.”

One area that was a little unclear was the purpose of the prose sections in this issue. Typically, these sections serve to provide plot details that aren’t shown (which isn’t necessarily a good strategy) or to flesh out a character’s own private thoughts or to show the reader some sort of communique. In this issue, the prose sections are partial chapters of a novel or memoir. Who is speaking is a bit unclear, but hopefully, Percy and company flesh this out and make it understandable in future issues.

X-Force #11 catches Krakoa with its pants down as they suffer a biological attack from Russia, and it appears to establish another piece of what I’m sure is part of the lead up to X of Swords. Percy and company establish a challenging enemy for X-Force, continuing to escalate the conflict with Russia, which will probably eventually involve Colossus getting involved, despite his protests to the contrary.

What did you think of X-Force #11? Is it laying the foundation for X of Swords? Will Kid-Omega ever NOT die in an X-Force issue? Tell us what you think in the comments below!

Krakoa suffers another attack as Colossus struggles to avoid leaving life on the farm.Review: X-FORCE #11 - Krakoa Gets Attacked...Again.