On August 19, Marvel Comics released Wolverine #4. Writer Benjamin Percy, artist Viktor Bogdanovic, colorist Matthew Wilson, and letterer VC’s Cory Petit take Wolverine to the cold north for a cold drink, but he finds more than he bargained for when Percy throughs the kitchen sink at him.

If you read X-Force #11, you may have noticed two things: 1) the absence of Wolverine, and 2) Omega Red’s presence on the cover but not in the book. Considering that Percy is writing both books, it’s not hard to imagine that he’s probably interweaving his tale between both books (although Omega Red’s presence on the X-Force cover is still a mystery).

After readers discover that Wolverine peed in Magneto’s helmet, Logan goes through a private gate to a bar in the frozen north, where he comes into conflict with a group of humans who are part of an anti-mutant trauma group, when they throw Wolverine into a frozen lake, Omega Red attacks, with an army of vampires behind him.

Readers have known that Omega Red was a Krakoan traitor, and while his overt betrayal may not have been expected this quickly, it will be interesting to see what the Krakoan response will be.

There is a slight “hat on a hat” element happening here in the writing. To have Wolverine be ambushed by Omega Red is one thing. To have him captured by an anti-mutant group is another. To put them both together and have one baddie taken out by another makes Wolverine’s world feel a bit small. It does show that mutants are surrounded by threats everywhere, both from within and without, and talking with the anti-mutant group does serve as a moment of reflection for Wolverine. It does seem like some of the X-books are forsaking earned conflicts and stakes and just escalating the threats in each issue with a sort of “and then this bad thing happens, and then this bad thing happens” logic.

It’s still a decent issue, and Percy’s X-books are still some of the best, but there is a sense that the X-books are stalling a bit, possibly waiting for the other shoe to drop in Hickman and company’s mega X-saga.

Bogdanovic’s art is solid in this issue. His style is somewhat reminiscent of Patrick Gleason (who does a variant cover for this issue) and Greg Capullo.

Bogdanovic gives his figures a bit more shading and coarseness, but those eyes are definitely Gleason-like! The whole issue has the look of an artist born if Greg Capullo and Patrick Gleason had a baby together (which isn’t a bad thing).

See? Don’t you almost expect the Batman Who Laughs to be under that hood?

Even in the picture below, doesn’t this look like Wolverine if Capullo designed him? 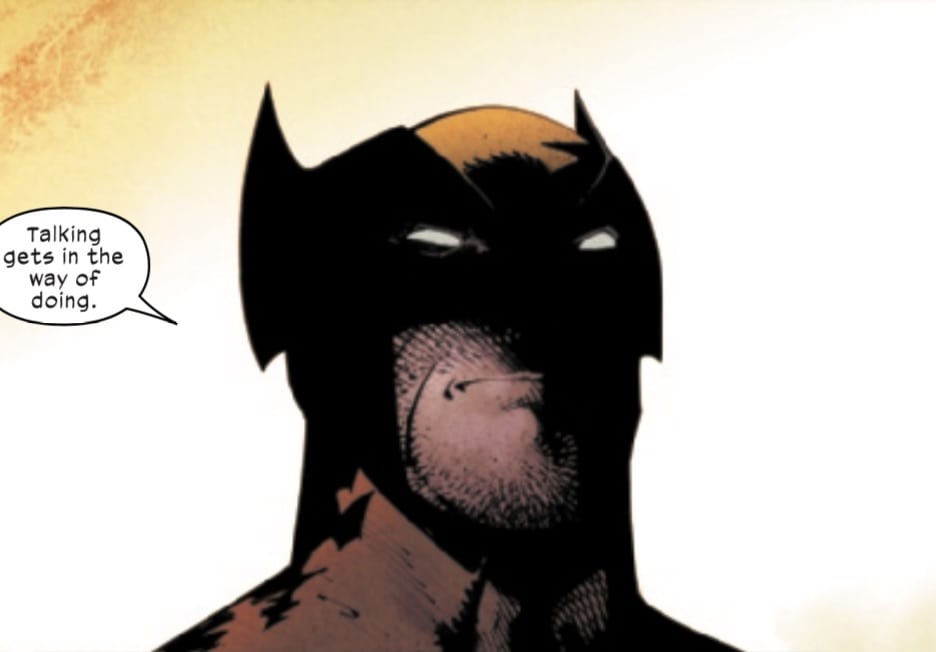 Meanwhile, Bogdanovic’s art is perfectly complemented by Wilson’s colors. There is some cartoony whimsy in some of the writing and tone of this issue, but that is undercut by the shading of the colors and the coarse texture that they’re given. One almost thinks about the whimsy yet sinister underbelly and darkness of a Tim Burton cartoon, and given the horror that this issue ends with, that description may be fitting.

Petit’s lettering is always fantastic and complements the story well. The goal for any letterer should be to complement the visuals in the story without distracting and overcrowding. This should especially be the case in a Wolverine comic where readers want to see, among other things, a fair share of visceral action and violence, which this issue does have. The sound effects blend into the visuals they are placed within, and the dialogue and narration keep the story moving forward.

There are two prose sections that are worth mentioning. These prose sections in the Hickman era have pros and cons. They can serve to fill in background information that keeps the story moving without having to devote entire issues to setting up certain plot elements. Still, in 20+ page comics, every page counts, and sometimes the prose has been excessive. That’s not necessarily the case in this book, although the prose page talking about Wolverine’s private gate probably could’ve been illustrated, while the page about the anti-mutant trauma group serves its purpose in filling in the background motivations of the humans who attack Logan.

Wolverine continues to be an interesting series, and it’s great getting into the head of Marvel’s favorite-although-sometimes-over-exposed mutant. It is interesting seeing how Wolverine has changed since the Dawn of X, where he could be seen laughing and playing with children on Krakoa. Now, he is a bit more reticent.

Readers may still be getting used to the rhythm of this book. After his first arc, Wolverine seeks some catharsis in a bar, only to find plenty of other threats waiting for him to kickstart his next arc. This series is still young, so despite some criticisms, I think it is one of the more visceral X-books published right now.

What did you think of Wolverine #4? Tell us in the comments below!

Wolverine #4 finds Logan seeking solitude in the cold north, only to find that there are threats there waiting for him and things that go "bump" in the night.Review: WOLVERINE #4 - Don't Let Down Your Guard!