Review: Tim Meets His Future Self In BOOKS OF MAGIC #15

BOOKS OF MAGIC #15, available in comic book stores Wednesday, January 1st, dabbles in time travel with the introduction of an alternate version of Tim from the future. Tim has been told of a possible future in which he wreaks destruction, but there are undoubtedly other timelines in which he fights for good. Either way, Tim must find a way to decipher this visitor’s true intentions lest he endanger himself and his friends. But are there any people left in his life that he hasn’t ostracized?

Tim is one frustrated young magician, more so than usual. His friends have abandoned him, fearful of his powers, and his teachers aren’t going easy on him in class. On top of this, a magical cult is after him.

Tim believes the threat is abated for a little while thanks to John Constantine’s meddling in BOOKS OF MAGIC #14. But Ms. Rose cues him in on another threat; a group with the magical world’s law on its side. 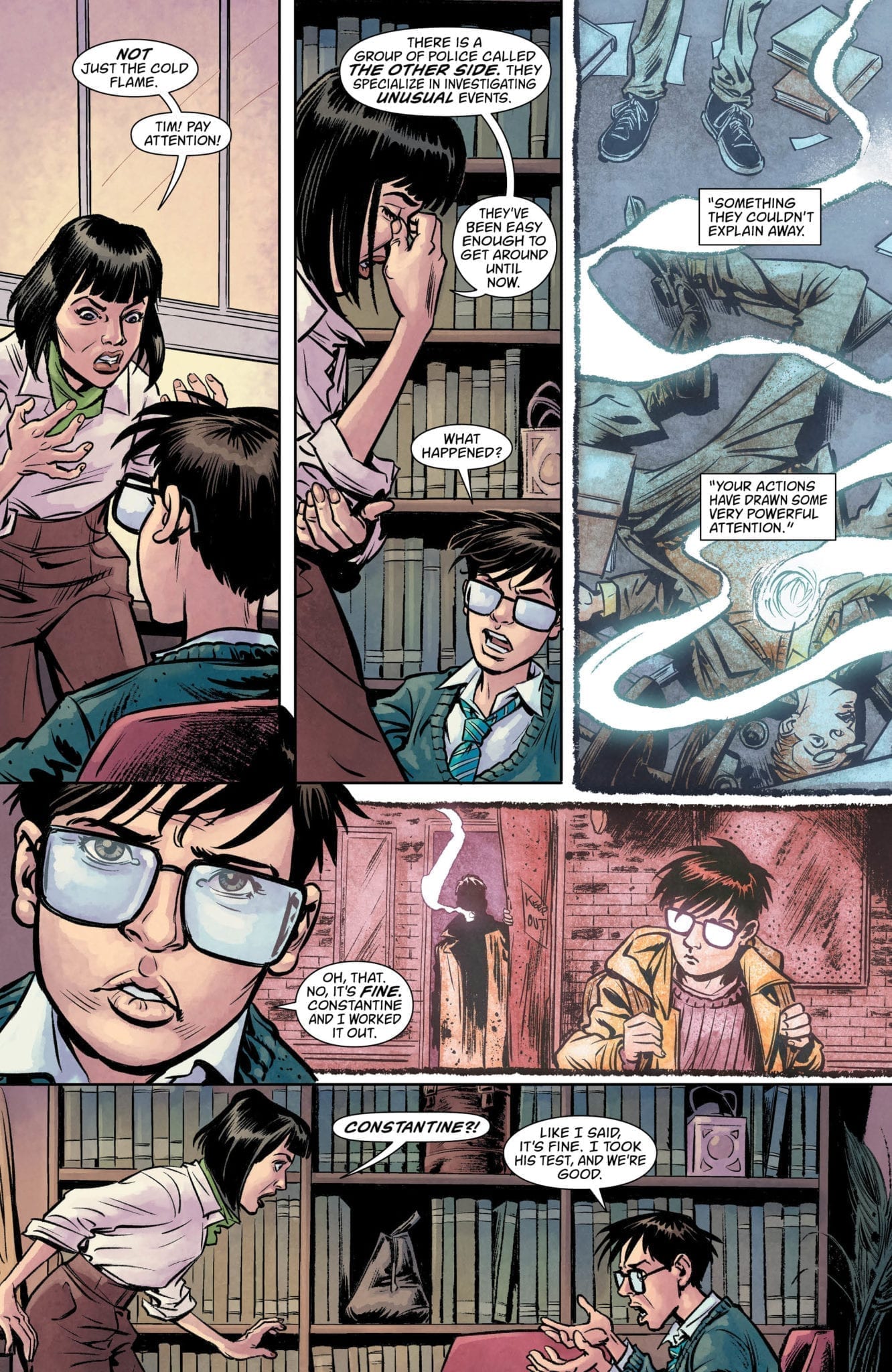 The young wizard leaves school abruptly to get some air, but runs into a twenty-something man who looks a lot like himself. This stranger reveals himself to be a version of Tim from the future.

Writer Kat Howard portrays Tim and his future counterpart beautifully in this issue. Each has their own distinct personality, yet retain the qualities that make readers enjoy the character: his feistiness, rashness, and general awkwardness. It was a delightful touch that made this story enjoyable.

The older version seems like a good guy, especially after helping Tim save people in danger on the streets of London, but can Tim trust him?

Tom Fowler’s penciling, Craig Taillefer’s ink work, Jordan Boyd’s coloring, and Todd Klein’s lettering were each pieces of the beautiful artwork found in BOOKS OF MAGIC #15. The scene settings feature crisp, solid lines that fully define the characters. Each individual figure is given their own unique colors to highlight their personalities, such as Tim’s bright yellow jacket to distinguish him from his fellow boarding school classmates.

The lettering was a nice feature of this issue as well, specifically in distinguishing between the present and future Tims. Each character’s dialogue is placed within letter boxes that look just like scrap pieces of paper, though they’re cast in different colors. This helps emphasize the sense of continuity between the two magicians at opposing stages of life.

Kai Carpenter’s cover features Tim and his future self, opposing one another on either side of a mystical tree. This shows readers the animosity that will ultimately brew between them and the magic in the middle of it.

Tim’s existential crisis appears to have been slightly abated due to his doppelganger’s treachery, but there’s still a lot of factors up in the air. We’re anxious to see what Tim decides to do next.

What do you think the future Tim has in store for the Tim in present time? Let us know in the comments below!

Review: Tim Meets His Future Self In BOOKS OF MAGIC #15Writer Kat Howard portrays Tim and his future counterpart beautifully in this issue. Each has their own distinct personality, yet retain the qualities that make readers enjoy the character.