Review: John Constantine Pays A Visit In BOOKS OF MAGIC #14

Hitting stores on Wednesday, November 27th, BOOKS OF MAGIC #14 brings together Timothy Hunter and John Constantine, another power sorcerer who’s made a name for himself in the DC universe. The latter has beckoned the younger wizard to visit him in exchange for a mysterious book, which Tim expects is one of the coveted Books of Magic. Caught in waves of self-doubt, trying to determine if he’s good or evil at his core, he jumps at Constantine’s invitation. But will the infamous con-man live up to his word?

Stepping into their agreed upon meeting place, an old bar named the Fox and Owl, Tim is brought to a table where Constantine has laid open the book. Though it seems to be blank, he claims Tim need only place his hands on the pages so he can begin a “test.” Convinced the more experienced sorcerer will kill him if he doesn’t comply, Tim plunges in, desperately hoping this dubious test will remedy his existential angst. 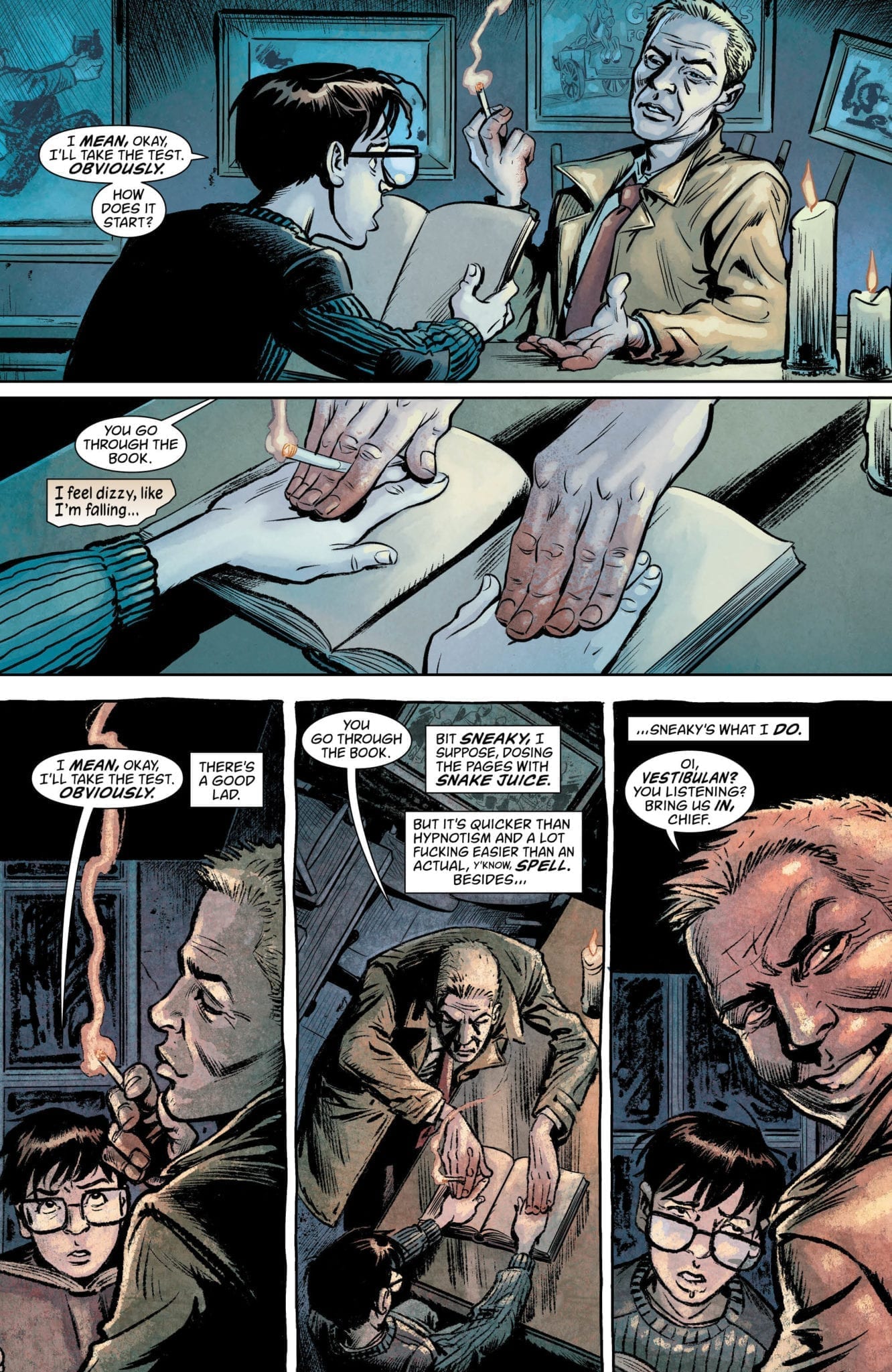 In the world of the book Tim meets the Vestibulan, a cursed angel who refused to take a side in the war between Heaven and Hell. He’s roped in by Constantine to ensure Tim doesn’t cheat on the test due to his impartiality. But back in the bar, the con-man’s true intentions are revealed in the form of Bita and Maz Ghūl, two cannibals who have agreed to literally eat Tim once the poison on the book’s pages kills him.

Why would Constantine want to kill Tim? The answer lies in an alternate future timeline the warlock visited in which the boy grows up to be an all-powerful tyrant.

Writers Kat Howard and Simon Spurrier structure this story to reflect both Constantine and Tim’s perspective. This gives readers a fuller understanding of each character’s motivations and perspectives in the midst of shared experiences. In this way, we are able to relate to the story’s more dubious characters.

Readers will eagerly jump at the opportunity to see Tim combat the forces in the book and, ultimately, Constantine himself.

Tom Fowler’s penciling and Craig Taillefer’s ink work, combined with Jordan Boyd’s coloring, create gritty tones fitting of this issue. One get’s the feeling they’re reading a John Constantine comic due to the dark lines and shading. However, there are also plenty of bright colors and swirling lines remain (specifically inside the book) to remind us of the weird magic ever present in Tim’s world.

Todd Klein’s lettering was fantastic in this issue as well. To fit with the dual narrative of Constantine and Tim, Klein uses differing background types for their dialogue boxes. Tim’s

Kai Carpenter’s cover artwork features Tim reading the mysterious book while Constantine creeps up behind him with a knife, alerting readers to the danger posing the series main character.

BOOKS OF MAGIC #14 brings together two of DC’s most popular sorcerers in a tale of existential angst and betrayal. We’re anxious to learn more about Constantine’s connection to Tim in the coming issues.

Do you think Constantine’s actions were justified? Let us know in the comments below!

Writers Kat Howard and Simon Spurrier structure this story to reflect both Constantine and Tim's perspective. This gives readers a fuller understanding of each character's motivations and perspectives in the midst of shared experiences.Review: John Constantine Pays A Visit In BOOKS OF MAGIC #14