Now iconic creator Jeff Lemire (Sweet Tooth, Moon Knight) teams up with artist Tyler Crook (Harrow County) for another winner in the world of Black Hammer. The Unbelievable Unteens #1 is Lemire taking a familiar but engaging approach to a story from the perspective of the culture he knows best. With a tight script and phenomenal artwork, this issue is a great start for what is sure to be another hit for the Black Hammer Universe.

“After signing at a comic book convention, Unbelievable Unteens artist Jane Ito finds herself visited by one of the characters from her own creation–but was it her own creation? Were the Unteens an actual school of teenaged misfit superheroes who battled supervillains under the lead of the mysterious Dr. Miles Moniker? And if so, who wiped their memories and why?  As Jane’s world is turned upside down and she learns the true nature of her identity she discovers a sinister plot leading her to assemble a team she had suspected was purely fictional.” 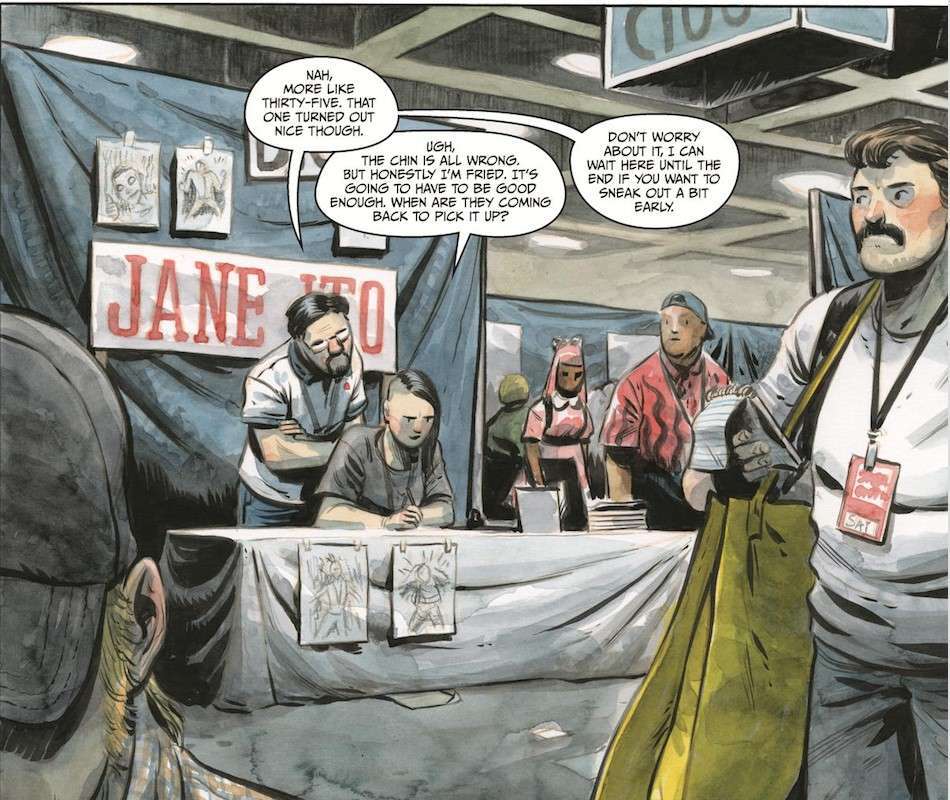 Jeff Lemire writes a tightly paced and thoroughly engaging script for The Unbelievable Unteens #1. He handles the introduction of Jane Ito through an intimate and honest look through the lens of a comics creator. Jane’s fulfilling but draining career is viewed from a perspective we readers don’t often get to see. The first third of this comic is paced and set up in a beautifully character focused manner that lets us see into Ito’s world. The introduction of the main plot is thankfully just as entertaining.

Lemire pulls the whole “creator meets their art” trick we’ve seen before. His writing is just so clean and naturalistic though that it still feels refreshing. The Unteens themselves are a clear nod to young misfit-superhero groups like the X-Men, The Power Pack, and the Doom Patrol. Black Hammer has always functioned as a pastiche tribute to classic comics. Lemire maintains that idea in Unteens, and like other Hammer books builds the plot around rules set in this original universe. The slow-burn building of the story Lemire is stylistically known for is in effect here as well. This issue endears us to Ito and her newly animated creation, and eagerly starts us on this new journey. 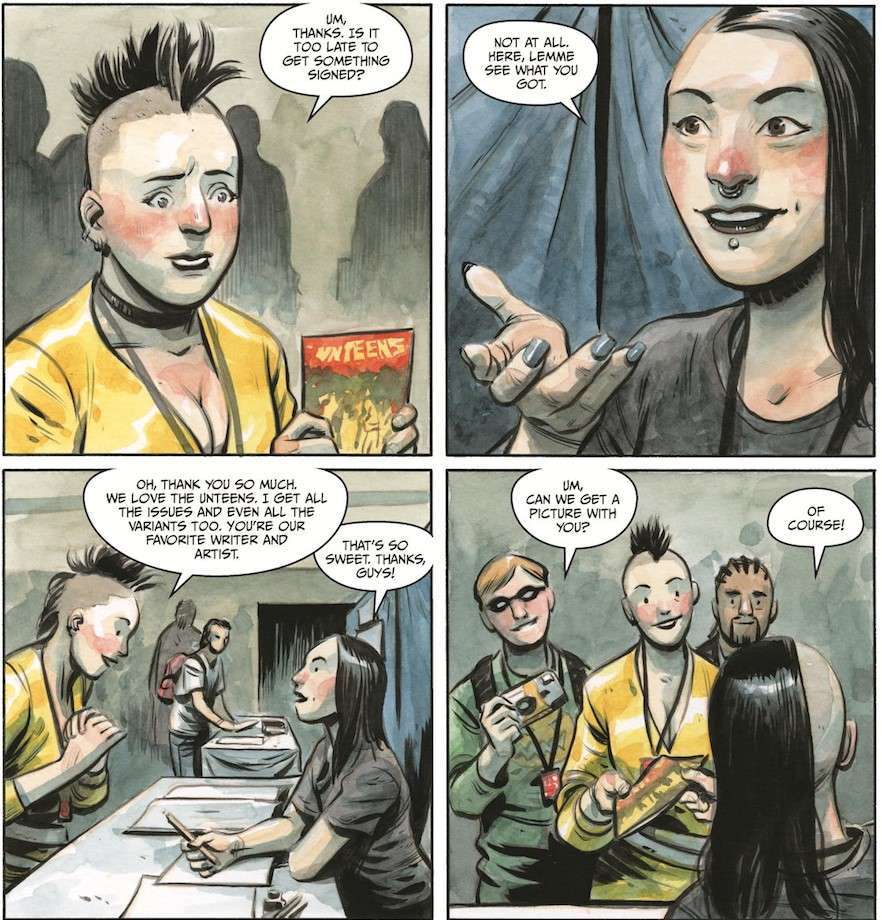 The Black Hammer universe has seen a crew of outstanding artists over the course of its expansion. Now, Unbelievable Unteens #1 receives the gorgeous work of Tyler Crook. The Harrow County artist brings his animated watercolor style to Spiral City and fits right into its lore. Crooks animations are stunning and clear. Every animation across Ito and her new friend’s ghastly face is well-realized and relatable. The character designs themselves are unmistakable, making remembering everyone a breeze if/when more of a cast arrives in later issues. The environmental detail here is astonishing as well. Crook captures Jane’s mood through how she perceives her environment. Almost this entire comic is shaded in a foggy gray mist. From the con floor to Ito’s studio apartment, her weariness colors every panel. Crook juxtaposes this against the sudden bright sun of his Unteens flashbacks.

I will never tire of seeing the vivid shades Crook’s watercolor style brings to a comic book. Crook also letters the comic, and he of course nails this as well. His lettering has a clean modern look that can change almost intuitively in shape and style. His effect lettering is visually unique as well, making this another complete win of a project for the accomplished artist. 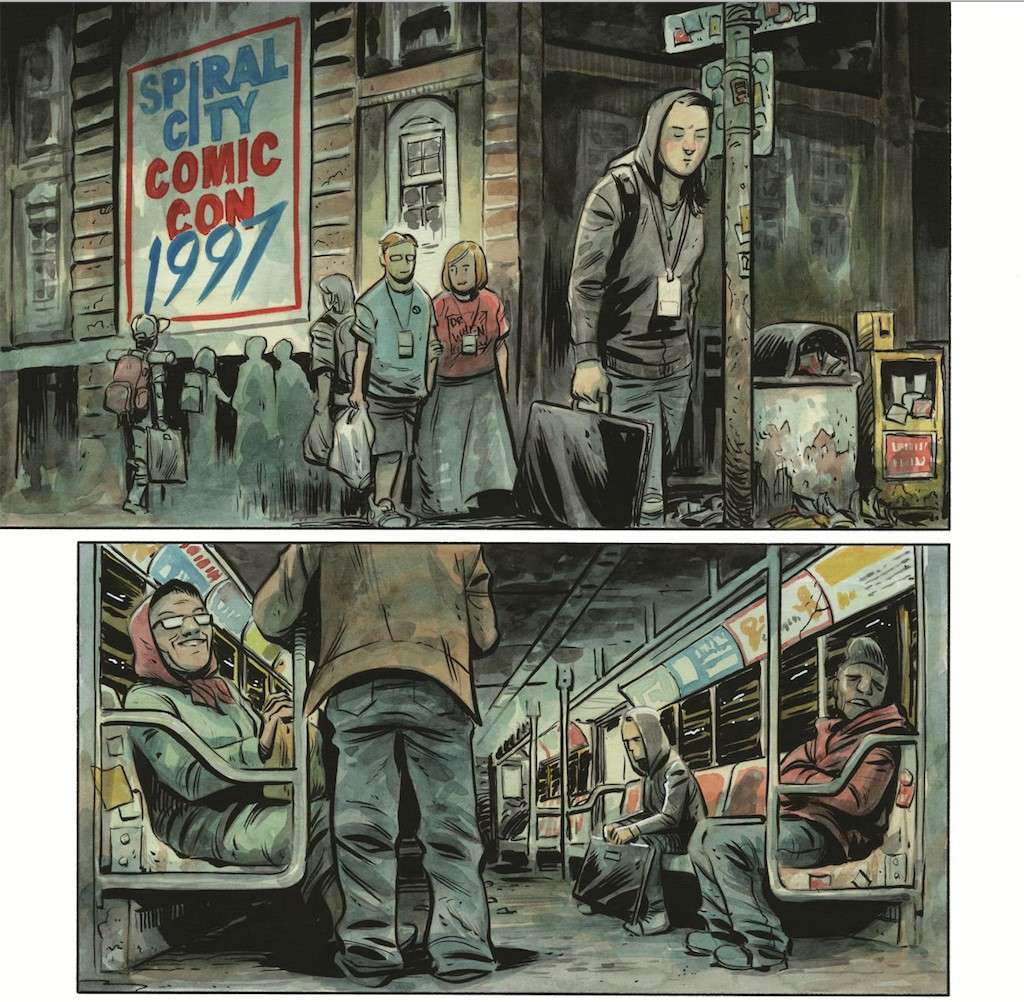 The Unbelievable Unteens #1 is a stellar and engrossing start to this new chapter in the Black Hammer universe. Jeff Lemire’s script has him taking his well-known Black Hammer pastiche trick and applying it to another familiar comic book trope. However he keeps the concept fresh with a unique perspective and killer pacing and dialogue. Tyler Crook’s visual work is an absolute winner once again, with his detailed animations, great environments, and moody colors, crafting a fantastic version of Spiral City. Be sure to grab this latest comic from the world of Black Hammer when it hits shelves on 8/11!

Jeff Lemire and Tyler Crook team up for yet another winner in the Black Hammer lineup with The Unbelievable Unteens #1.Review: THE UNBELIEVABLE UNTEENS - Deus Ex Black Hammer