Dark Horse Comics’ Black Hammer Reborn is more like the original Black Hammer than you’d think. In Black Hammer, writer Jeff Lemire and artist Dean Ormston introduced us to a bunch of heroes that were well past their heyday. Stuck on a farm together, the heroes of Spiral City were dealing more with being cooped up than with fighting supervillains. With Black Hammer Reborn #1, writer Jeff Lemire, artist Caitlin Yarsky, colorist Dave Stewart, and letterer Nate Piekos bring us back to that feeling of days gone by. Lucy Weber, the second person to take up the Black Hammer mantle, has put crimefighting behind her. But maybe she won’t be able to for much longer?

Without the burden of worldbuilding in this new series, Lemire can do whatever he wants. We know the characters, we know the world, he can just dive into the story. But interestingly, this issue is very normal. Just like the original Black Hammer series, Black Hammer Reborn is subtle and human. Lucy Weber isn’t out there punching baddies in tights, she’s raising a family. And just as we begin to think Lemire is repeating himself, he throws in some new elements. We learn about dark secrets and unpredictable sci-fi forces that threaten to blow up Lucy’s existence. In many ways, there’s not much to the script of this issue. We see Lucy with her family, at work, we see a flashback of her fighting a villain, but not much else. But to those familiar with Lemire’s work, there are clues sprinkled in, seeds being planted for where this series might go. 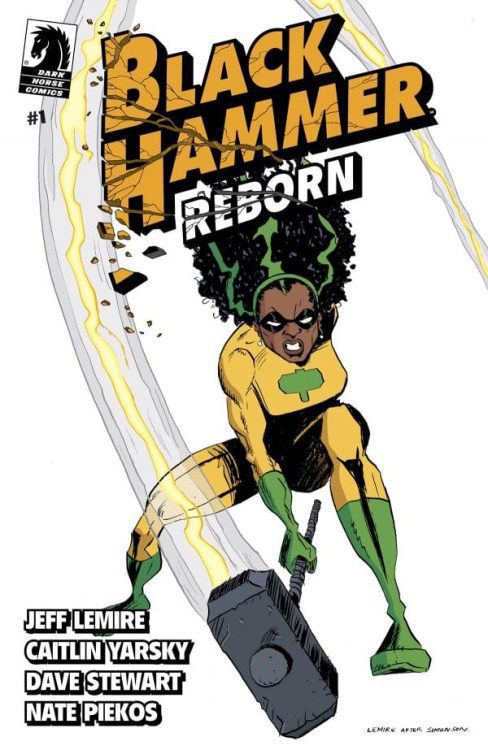 Yarsky’s art reminds us of who we’re dealing with. Lucy Weber was Black Hammer. She might be a mom or a corporate drone now, but she used to be a freaking superhero. And it’s in the drama and expressions that Yarsky shows us this. Lucy’s life is still big and bold, it’s just confined to a new stage. So, when her boss catches her looking up old articles on her computer, his self-righteous leer is that of a supervillain. When Lucy screams for her kids to come downstairs, the look on her face says she may as well be screaming at Anti-God himself. Her life is still full and colorful, it’s just different. Occasionally, moments feel melodramatic, even silly. But maybe these moments feel a little silly to Lucy too. After all, she’s saved the world. What wouldn’t feel silly after that?

Not only do the flashback scenes look more vibrant, but they feel like they have a “Lucy” flavor to them that the modern scenes don’t have. As Black Hammer, Lucy’s costume is green and yellow. And when she fights a villain in a flashback, Stewart puts green and yellow everywhere. Yellow is the backdrop of a cop having his gun ripped away, green is the color emanating from the villain. These memories are Lucy’s and these moments were when she felt truly like herself. The modern day scenes feel a little drab in comparison. There’s not much green or yellow, mostly just blue and beige. But then Lucy begins to see things that remind her of her past, and the colors return. Stewart is showing us just how nostalgic Lucy is, even though she’s claiming not to be.

Piekos also shows us the big difference between Lucy’s past and present. When she fought as Black Hammer, the fonts for dialogue were constantly changing size and style. There’s a rhythm and a playfulness to how Piekos writes these scenes. But her modern life is straightforward. Piekos rarely bolds worlds or has them jut out in a larger font. Except when Lucy is scolding her kids. It’s bittersweet that this is the only moment her voice shows expression. Sure, she has a simpler life now, but she only seems to come alive when she’s angry and tired of it all.

Dark Horse’s Black Hammer Reborn #1 is an interesting start to a new era. This creative team is easing us into the story to come. While we might not have much to go off of just yet, there are plenty of seeds planted that could lead in all kinds of directions. Pick up Black Hammer Reborn #1, out from Dark Horse June 23rd, at a comic shop near you!

Dark Horse's BLACK HAMMER REBORN #1 is an interesting start to a new era. This creative team is easing us into the story to come. While we might not have much to go off of just yet, there are plenty of seeds planted that could lead in all kinds of directions.Review: BLACK HAMMER REBORN #1 - Black Hammer is Back... Right!?