Review: The New Ronin Wrecks The City In HAWKEYE: FREEFALL #2

HAWKEYE: FREEFALL #2 hits comic book stores on Wednesday, January 29th, continuing the sharp shooting Avenger’s solo adventure. Last issue introduced readers to a nefarious figure known as the Hood, who seems to have much of the city in his back pocket. In addition, a person running around dressed as Ronin is causing trouble, and many consider Clint to be the perpetrator. How will the hero handle these thorns in his side? The way he always does—a little luck, a little skill, and a devil-may-care attitude.

Hawkeye’s been on a losing streak in terms of crime fighting. He was unable to apprehend the crime lord the Hood, and the mysterious figure committing felonies in his Ronin costume continues to evade him. In this issue, the anonymous vigilante runs through a number of cronies serving the Hood, slowly clearing them out for unknown purposes. 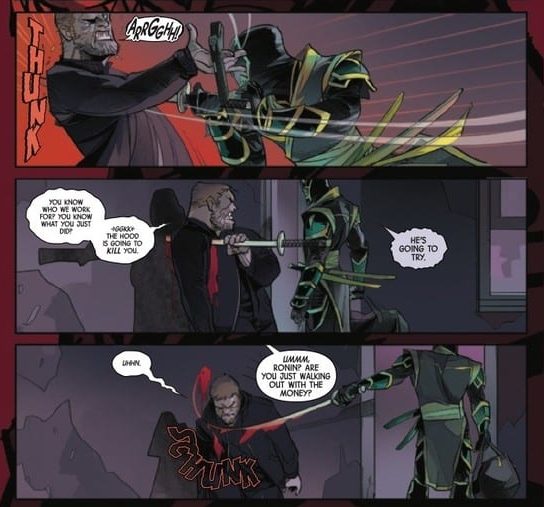 While “Ronin’s” going on a rampage, Clint uses some recently acquired funds to fund a gala for F.E.A.S.T., the charity run by May Parker. Writer Matthew Rosenberg purposely leaves his motives unknown, allowing readers to decide whether it be for egoistic glory or nobler purposes. This ambiguity allow us to put ourselves in Clint’s shoes.

We then learn Spider-Man has caught wind of the Ronin figure’s escapades and attempts to subdue him. But the figure proves to be too much of a trickster, outsmarting someone as capable as the arachnid hero. 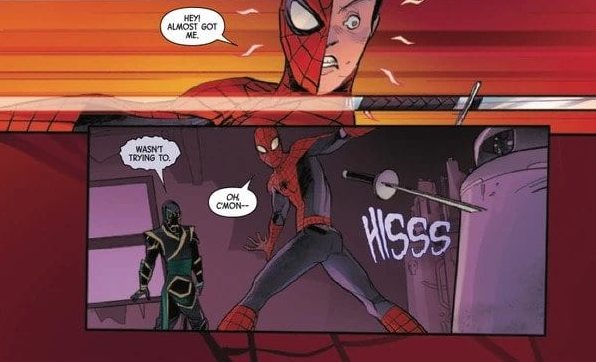 Who is this masked figure? Is it just a coincidence he has similar skills to those of Clint? These answers and more are revealed in this action-packed issue. 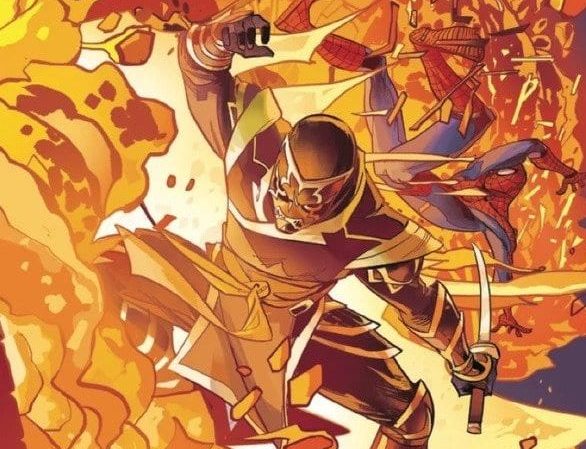 Otto Schmidt’s artwork for this series’s second issue is unique in its pleasing simplicity. The fluidity of the characters’ designs pairs well with varying purple shades, reminding us that this is undoubtedly a Hawkeye-focused story. What’s more, VC’s Joe Sabino’s lettering employs its own purple variations for Hawkeye’s internal dialogue and the Ronin figure’s speech, bringing greater cohesion between the illustrations and text.

Kim Jacinto and Tamra Bonvillain’s artwork for the main cover depicts an aerial fight scene between Clint and the Ronin doppelganger. It’s a scene that prepares readers for the inevitable confrontation between these intriguing characters.

Kyle Hotz and Dan Brown’s variant cover illustration chooses to present Clint and his other rival, the Hood. The sprawling red cloak from the villain covers up much of the city backdrop, perfectly representing the influence he has upon the people.

HAWKEYE: FREEFALL #2, on the one had, takes us further into the life of Clint as Hawkeye and his lackluster escapades. These moments help further humanize the “worst Avenger,” wooing his fans even more. On the other hand, the mystery of Ronin’s identity is intertwined throughout these events, keeping readers on the edge of their seats all the way through.

What did you think of the big Ronin reveal? Let us know in the comments below!

Review: The New Ronin Wrecks The City In HAWKEYE: FREEFALL #2Otto Schmidt's artwork for this series's second issue is unique in its pleasing simplicity. The fluidity of the characters' designs pairs well with varying purple shades, reminding us that this is undoubtedly a Hawkeye-focused story.