Writer Mariko Tamaki, artist Dan Mora, colorist Jordie Bellaire and letterer Aditya Bidikar solidify Dark Detective as the best title out of DC Comics’ Future State. Future State, a bold event that was rooted in brilliant storytelling motifs, is one of the strongest events to come out of DC Comics, certainly in recent times at least. I could count on one hand the titles that I didn’t like. So, Dark Detective had some stiff competition, but this creative team hit it out of the park. Their final issue, Future State: Dark Detective #4, is an explosive conclusion to a thought provoking miniseries. It goes to show that Tamaki, Mora, Bellaire and Bidikar are as good at action as they are at hard boiled mysteries.

Tamaki creates a clear rhythm in this issue. She begins the issue slowly, simply with her word count. We see the Magistrate’s Peacekeepers discussing their loss of equipment. They’ve had a bunch of their drones taken right out of the sky. They talk out possibilities. It’s slow, text-heavy and a sign of the rising danger to Bruce Wayne. Even in these slow moments, Tamaki creates a sense of fear. It’s the Peacekeepers’ casual belief in their own control that shows just how powerful they must be. And as the danger goes from theoretical to physical, Tamaki drains the page of words. We only get the brief bit of dialogue here and there between punches and explosions. Tamaki amps up the stakes by speeding our eyes through each page. She gets us anxious to get to the next line of dialogue, and keeps it brief enough that we can read through these pages in a heart-thumping frenzy. 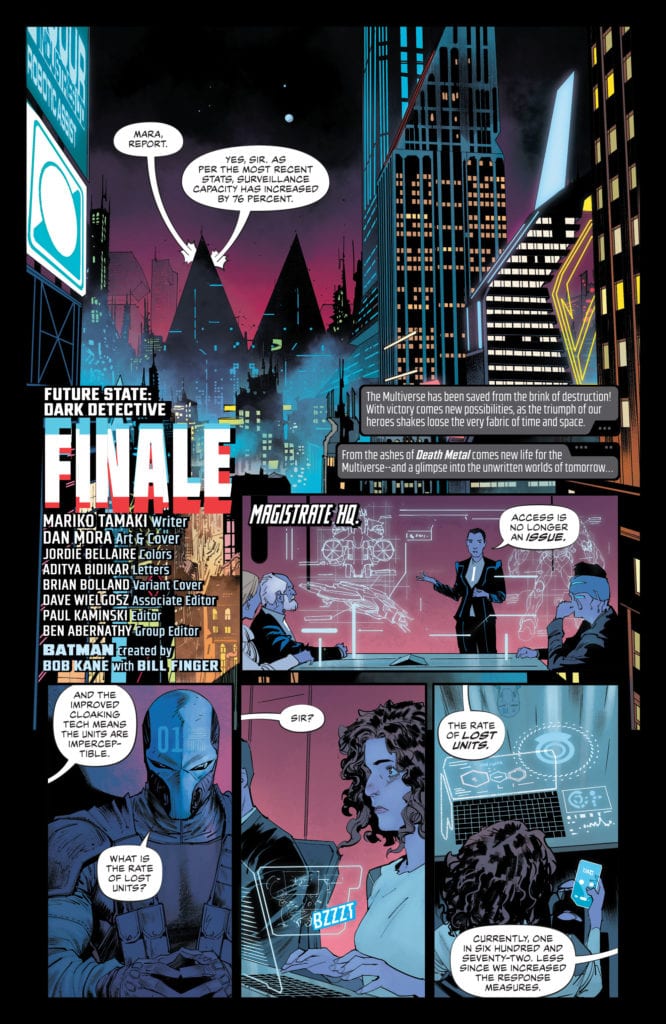 Mora adds in a sense of chaos in the action scenes. He stacks panels on top of each other to show the sheer break-neck pace of time. There’s such an urgency to these moments. Mora makes them look as though they happen within milliseconds. And when things get truly out of control, Mora makes the destruction work to his advantage. Shards of glass, flying through the building, are turned into panels. These moments are so clearly dangerous and chaotic. Even the progression of the page becomes slightly unclear. We become briefly unsure of what panel we’re supposed to read next. But Mora does this deliberately. He wants us to feel a moment of panic, the pause between panels of trying to decide which to read, just as the characters are experiencing panic. Not only does he somehow, in the confusion, maintain a sense of order, but he allows us to empathize with the characters in these tiny moments.

Bellaire practically color codes each page. Every page has a single overwhelming color. We see the blue of the Peacekeepers’ meeting, the green of Bruce’s bunker, and the orange of destruction and fire. When we transition from the Peacekeepers to Bruce doing research, Bellaire makes each page look quite similar. The blue glow of Bruce’s computer screen makes his room look similar to the Magistrate’s offices. In using the same colors, we get this feeling of “Haven’t I seen this already?” It sticks out as repetitive. But there’s two pages of Bruce working first. Two pages of purple, of Bruce climbing on roofs and checking equipment, before we get to the blue. Bellaire makes us feel as though Bruce is only just catching up. He might be playing the same game as the Peacekeepers, but he’s a couple pages behind. 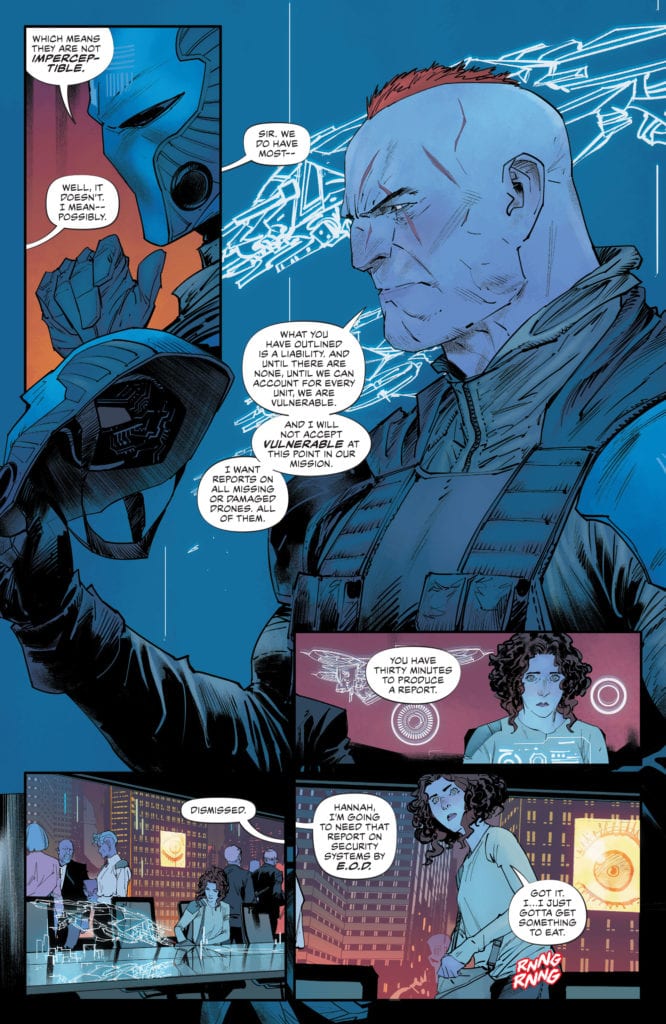 One of the best things that Bidikar does in this chapter is communicate a sense of dismissiveness. We see Hannah, Bruce’s roommate’s daughter, sitting among the Peacekeepers. She’s in the room, she works with them, but she’s practically invisible. We know this because every line spoken to her by her colleagues is done from off-panel. The balloon tails lead right of the panel. We never see the pointed end of the tail, almost as if the words barely come out of the speakers’ mouths. If we saw the full word balloon, Bidikar would be communicating to us that these people are making an effort to communicate with Hannah as an equal. They’re speaking in a way that their whole line fits into her world. Even if they’re not fully in the panel, what they’re saying is. But with the tails leading off all the way, it feels like a power play. It’s an invading line of dialogue spoken by someone who has no interest in truly relating to their colleagues.

DC Comics’ Future State: Detective Comics has turned out to be Future State’s best title. It has mystery, action, horror, and social commentaries out the wazoo. And this issue also has a charming Red Hood backup story by Joshua Williamson, Giannis Milonogiannis, Jordie Bellaire, and Troy Peteri, that deserves a review of its own. If Dark Detective is a sign of what we can expect from Tamaki’s upcoming tenure on Detective Comics, well… it’s nothing but a very good sign. Pick up Future State: Dark Detective #4, out from DC Comics February 23rd, at a comic shop near you!

If DARK DETECTIVE is a sign of what we can expect from Tamaki's upcoming tenure on DETECTIVE COMICS, well... it's nothing but a very good sign.Review: The Explosive FUTURE STATE: DARK DETECTIVE #4