Dead looks good on Bruce Wayne. That’s because Batman’s character is always at his most entertaining when he’s backed against a wall. Plenty of creators have found new ways of doing this. Take his fortune, take his loved ones, take his sanity. But writer Mariko Tamaki, artist Dan Mora, colorist Jordie Bellaire, and letterer Aditya Bidikar have crossed even more lines in DC Comics’ Future State: Dark Detective #1. They’ve taken his life.

Tamaki immediately sets the tone, seamlessly and brilliantly. “Gotham,” she begins with a caption. “Gotham is a funeral no one’s attending.” Her false start says everything. It’s a sentence the speaker doesn’t have the energy to finish. And that’s the entire theme of this story. A Gotham City that’s even more rundown than we thought possible. People who somehow care less than they did before. And Tamaki leaves us wondering if Bruce Wayne cares anymore either. Is he fighting to save Gotham, or is he merely fighting to survive? Tamaki doesn’t answer these questions. She pulls back the dialogue and the captions, leaving the large pauses in between ripe with subtext. Tamaki shows, she doesn’t tell, and Dark Detective #1 is beautifully mysterious for it.

Mora has always been a fantastic artist. But he pushes himself to new heights in this issue. His gritty images of Bruce running through the shadows are juxtaposed against his cleaner panels on billboards and in restaurants. Mora also gives this issue a sense of flow. Like ending one paragraph with a transition to the next, but instead with images hinting at the next scene. A girl getting ketchup on her hands in a fast food joint is followed by Bruce’s bloody fist as he bangs against a door. A neon image of Batman in his prime gives way to a picture of Bruce Wayne on a billboard. Mora isn’t just drawing a comic. He’s creating a visual essay, linking themes together and transitioning from point to point with subtlety and precision. 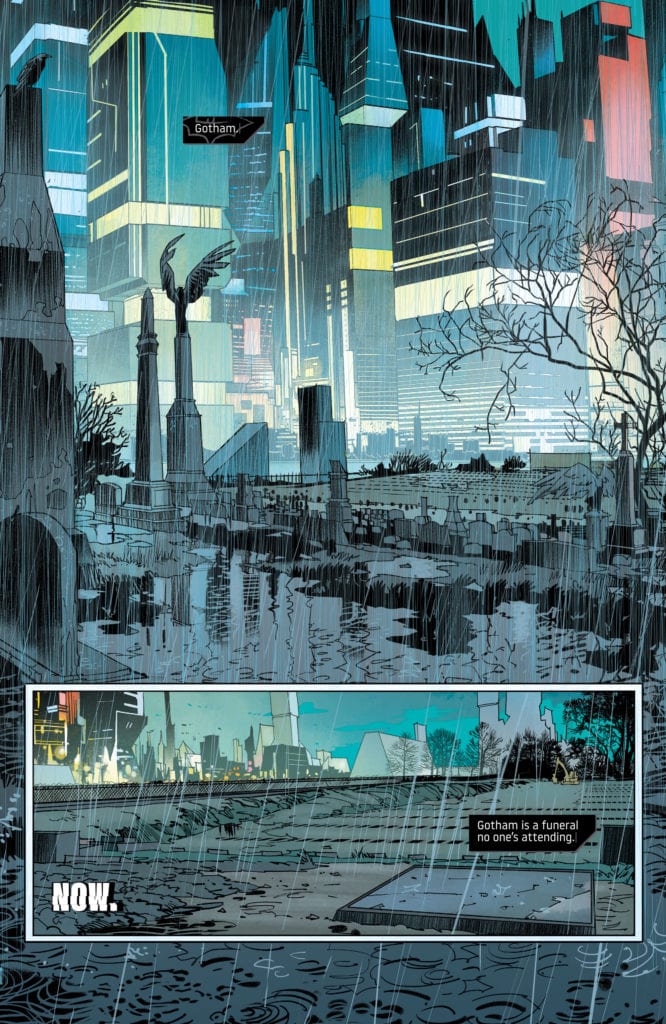 Bellaire has been the colorist behind some of comics’ greatest hits. So it means something when I say that Dark Detective #1 is some of her best work. Everything in this version of Gotham is washed in neon lights. It’s both beautiful and claustrophobic. We don’t get to see characters as they are; we see them under Gotham’s bright “shadow.” Bellaire associates these neon colors with the new tyrannical villain, the Magistrate. So when Bruce is in danger, Bellaire underlines it with another neon yellow panel. It’s a visual warning sign, telling Bruce to run. And the few times we do see characters without a neon hue, it’s equally depressing. Bruce, on his own in an alley, looks left out in the cold. He may be free, momentarily, from Gotham’s neon eyes, but his lack of color makes him look pale with fear. We’re not left confident, exactly, that Bruce will get out of this one unscathed.

Bidikar makes this issue fun and terrifying all at once. They punctuate moments like Bruce falling from a building. The “KRASH” exploding from the bottom of the panel gives us a sense of Bruce’s pain. But Bidikar also creates a sense of urgency. When Bruce is suddenly being followed by the Magistrate’s drones, Bidikar gives us a sense of how close they are from their dialogue. “STOP ALL MOVEMENT!” shows up in large letters at the bottom of a page out of nowhere. The drones are on top of him. But as Bruce begins to get away, their dialogue shrinks. And then, of course, as they begin to catch up with him again, their dialogue gets bigger. It’s Bidikar’s way of showing how close the danger is and getting us on the edge of our seat for what could have otherwise been a forgettable chase sequence. 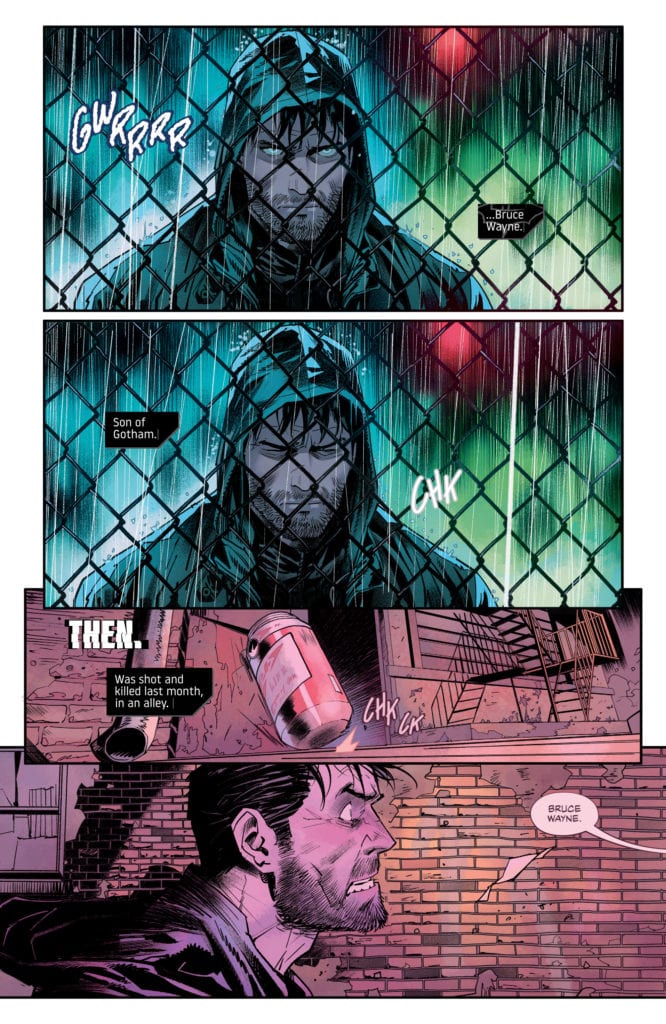 Writer Matthew Rosenberg, artist Carmine Di Giandomenico, colorist Antonio Fabela, and Andworld Design lettering brings us a chaotic look into Cole Cash’s life, AKA Grifter. As if Grifter’s life wasn’t chaotic enough, he now lives in a dystopian Gotham, so on the brink, he’s starting to look more and more like a good guy by comparison.

Rosenberg certainly understands a character like Grifter. We see Grifter living from one moment to the next, never really thinking of the future. “Friends of yours?” Luke Fox whispers to him as they come to face-to-face with a new character. “Not sure,” Grifter whispers back. He constantly improvises and has a short term memory when it comes to his mistakes. If Rosenberg had been a little more restrained with his script, trusting the reader to connect some dots instead of connecting them himself, this storyline would have hit home brilliantly. Rosenberg has these characters’ voices down pat; he needs to trust that his premise is already clearly set up between the lines.

Di Giandomenico creates little moments of order in the chaos. At one point, as Grifter stabs a thug in the chest, Di Giandomenico draws an action line from the knife in one panel to it hitting its mark in the next. And in a bustling prison car, it’s not the kicking and screaming we notice, but the casual smile on the prisoner’s face. Unfortunately, we don’t get many opportunities for these little moments. Many of these pages are chock full of gunfights and chase scenes. While they are exciting, there isn’t always much to focus us in on. Di Giandomenico creates action and chaos often in these pages, but it’s the brief seconds of order that shine.

Fabela’s color palette is quite reserved in this storyline. Despite big explosions and crazy gunfights, much of the story is red or blue. It flies in the face of the subject matter of the story. But it makes sense. This is a world that is controlled. Fabela shows us what Grifter and Luke Fox are fighting for, or at least what they’re fighting against. The oppressive simplicity of each page speaks of the micromanagement of the Magistrate and his allies. So, with a few flashes of yellow and a splash of purple, Grifter and Fox hope to get back to the colorful world they’ve lost.

It’s hard to find much to praise in Andworld Design’s lettering. With massive blocks of text being delivered in singular word balloons, there’s no sense of rhythm or tempo. And the robotic looking “BLAM” sounds of guns going off get repetitive and boring quickly. Occasionally, though, Andworld Design makes an interesting choice, a choice you can hear. “Yo, you’re Cole Cash?” a thug says. “You’re dead,” follows it up, in a connected balloon. That’s a pause you can hear, and it has a terrifying effect. But frankly, much of the rest of the story feels impersonal and robotic. Mostly, it’s a story you’re reading with your eyes, not hearing in your head.