Comics mega-talent Liam Sharp (Green Lantern, Wonder Woman) embarks on a quest through time with bio-mechanics and magic at his side in Starhenge #1. While certainly a bit of a dense read that will be hard to parse on a first reading, this opening chapter offers wonders to those who decide to engage with its layered storytelling. With an intricate script and absolutely medium-defining visuals, this issue will be a massive treat to those looking for an adventurous new take on some classic mythology.

“A future Merlin travels to 5th-century Britain to prevent monstrous time-traveling killer robots from robbing the universe of magic, and Amber Weaver’s lively present-day narrative reveals how she becomes drawn into a war across time!” 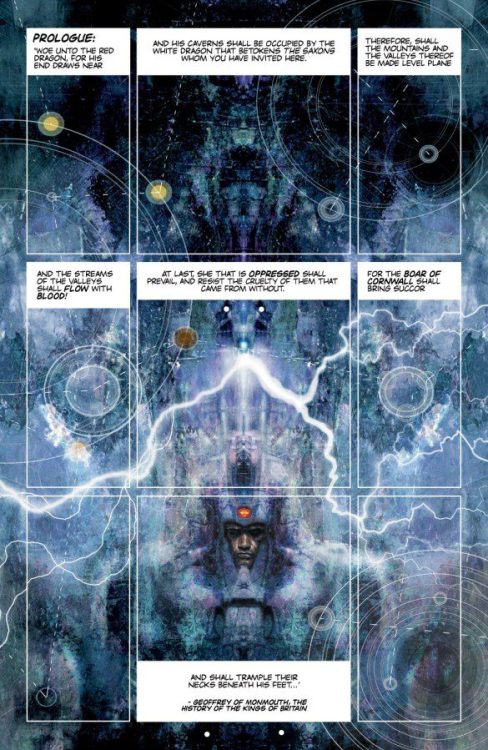 Liam Sharp plays with old English mythology and science fiction in a combination probably never seen before in Starhenge #1. This book’s narrative dances from England in the time of the Saxons to the edges of space in a far future, and back into present in a flurry of story beats and conceptual exposition. The pieces of story taking place in the distant folklore-ish past are minimal at this point, but it is alluded to that there will be much more to come. The present day material, following a teen Wiccan on her visit to America, is lightly entertaining but easily the least interesting aspect of the book. Aside from her knowledge of pagan magic she’s earned from her parents, her connection with he rest of the story would feel a bit vague if not for the near-overwhelming amount of exposition from her perspective. See, Amber also functions as the story’s narrator for this chapter. Unfortunately, her dialogue/narrative voice comes off as tonally jarring to the point of annoying. There’s some charm to her words, but in the end this narration feels like sticking a James Gunn script in the middle of a production of King Lear. Some may enjoy the very teenager-ish dialogue over the story, but it really didn’t do much for me.

The future material though, where distant humanity wars with a bio-machine race, is the most fascinating bit of the story. The concepts are familiar yet crafted in combinations we’ve not seen them before. Like a mix of Jodorowsky’s work, Dune, and The Terminator, Sharp’s story here is massively distant yet full of history and familiar conflicts. His dialogue here trends on the more grandiose that one may expect from a massive sci-fi epic. It’s truly wondrous stuff to behold, and seeing how Sharp wraps it all back around into Arthurian myth is nothing short of awesome. This issue can be a bit much to put together, but is truly rewarding for those who decide to stick with Sharp’s narrative here. 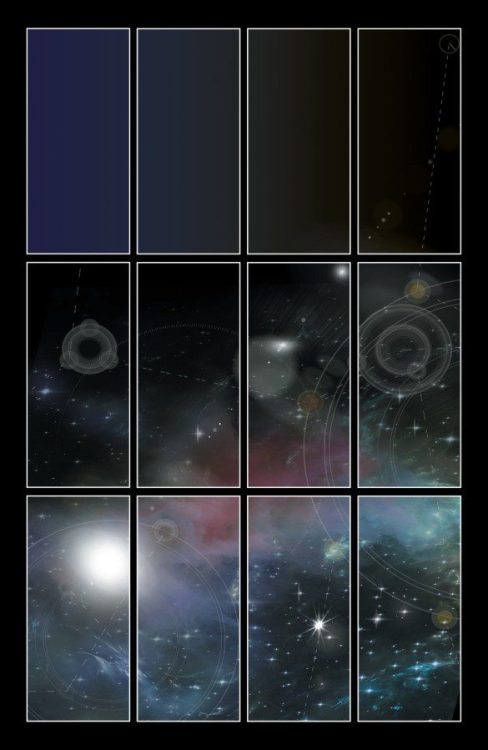 As cool as the story and concept may be, most will be too busy gawking at the visuals when they pick up Starhenge #1. Liam Sharp is already known for his incredible talent, with his work on Wonder Woman, Batman: Reptilian, and Green Lantern with Grant Morrison all being some of the most outstanding looking comics of the last decade. So when I say that this stands head and shoulders above those titles, it isn’t said lightly. Sharp crafts a visual storytelling experience that is difficult to critique as comic book art. His work here feels similar to Dave McKean’s Vertigo art in the late 80’s/early 90’s. Starhenge feels like taking a stroll through a conceptual art gallery that just happens to be telling a sequential story. Each of Sharp’s pages is filled with his beautiful painted art style that is breathtaking from the first page to the last. Even the more subdued sequences following Amber and her boyfriend are like stunning portraits capturing a still moment in life. The panels set in the mythical past feel like museum pieces that some jerk put word bubbles over. The panels following our futuristic successors range from an H.R. Geiger level of bio-mechanical disturbing beauty to vast and wonderous pieces of science fiction art.

Sharp’s painted colors are vibrant and atmospherically perfect, with each sequence’s palette shifting and suiting its setting while still transitioning smoothly from one set to another. His panel direction doesn’t follow conventional comics rules either. Close-up panels will interrupt a page sequence with an important or shocking detail that may throw some readers. Many panels are just shifting focuses of the same images, with the intention of impressing upon the reader a specific tone or sense of detail. It’s brilliant stuff, and yet another aspect of this book that makes the visual experience stick out so much as a comic. 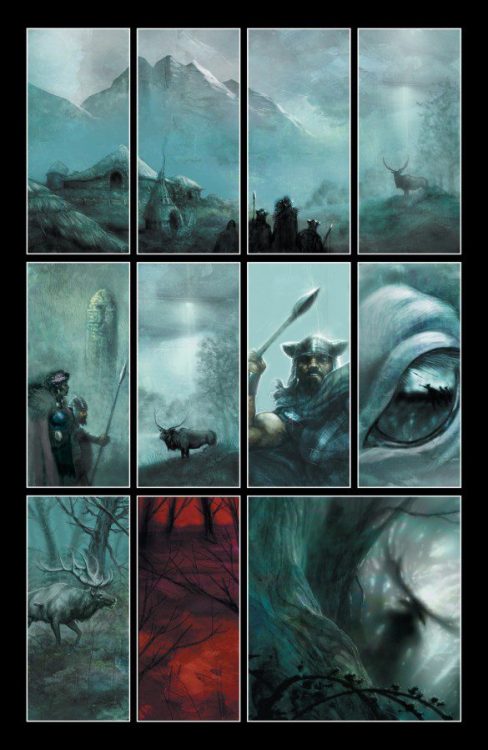 Starhenge #1 feels like a timeless artifact of comic storytelling. Liam Sharp’s narrative may have a bump or two, but its ultimate execution is grandiose and fascinating. His art, unsurprisingly, is absolutely astounding, landing among one of the best and most unique visual experiences in a comic in recent memory. Do yourself a favor and pick up this first chapter when it hits shelves on July 6th!

Wildly imaginative and visually astonishing, Liam Sharp's StarHenge will be a challenge for some to engage with, but is a real treat for those who take the dive into this comic's stunning use of mythology. Review: STARHENGE: BOOK ONE - Arthurian Legend Meets Skynet