Review: The Dark Knight At His Most Terrifying In BATMAN: REPTILIAN #1

Comics legend Garth Ennis (Preacher, The Punisher) and artist extraordinaire Liam Sharp (Wonder Woman, Green Lantern), along with letterer Rob Steen create a Batman chapter from another era, in a manner that hasn’t been seen in decades. Batman: Reptilian #1 is a sharp and surprisingly frightening comic in the Dark Knight’s catalogue. With Ennis’s snark, dialogue-heavy script and Sharp’s menacing painted visuals, this is one of the most striking mainstream comics published in recent memory.

“What strikes fear into the hearts of those who terrorize Gotham? It used to be Batman, but something far more frightening than a mere man stalks the shadows and it’s after Gotham’s villains. How savage must a monster be to haunt the dreams of monsters? Pick up this dark and bone-chilling tale by comics legends Garth Ennis and Liam Sharp to find out!” 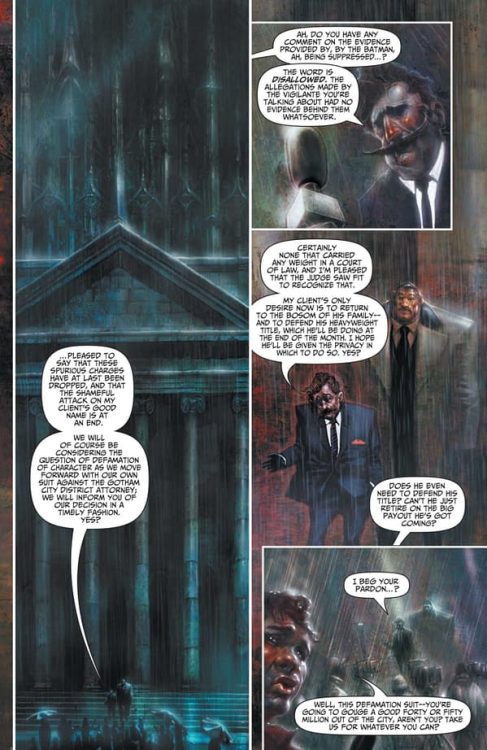 Never would I have thought that, in the year 2021, would we be receiving a Batman comic written by Garth Ennis. Batman: Reptilian #1 is a callback to an era where Batman was at his most frightening. Ennis’s famously anti-superhero sentiments come across in how the iconic writer writes Bats not as a gadget-toting dispenser of nighttime justice, but as a cerebral force of terror.

Reptilian’s status as a Black Label comic is readily apparent. A showdown unlike anything I’ve witnessed in a recent Batman comic sets the issue’s tone from the start. This intimidation tactic Batman uses covers subject matter and a grounded, grimy reality that would not fly in an in-continuity DC comic. Garth Ennis is writing a bolder, more abrasive Batman than has been seen in the past 30 years. I find myself more reminded of the work of Norm Breyfogle and his Legends of the Dark Knight title, as well as Morrison’s Arkham Asylum and Gothic, than by any recent Batman books.

Ennis writes Batman as a Sherlock-esque street-level and brash detective, while still maintaining that legendary sense of terror the character brings. This terror has been overshadowed in recent years by crossover events and team-up books. This isn’t an indictment of those mainline titles (many of them are fantastic), it’s just an observation. Ennis’s dialogue-heavy script is full of great lines that will stick with you long after you’ve closed the book. The manner in which he presents the Batman to the criminals he faces down is stunningly frightening – and immensely badass. Reptilian reads like a comic from a different time, which is nothing less than I’d expect from the iconic writer. 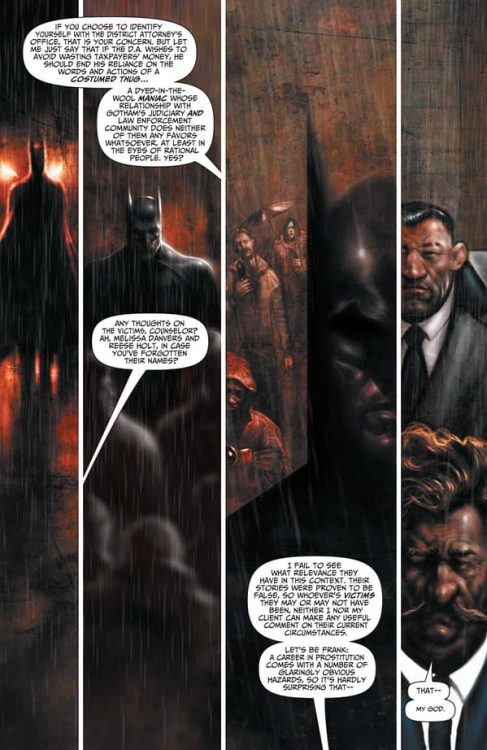 I wouldn’t blame you if you opened Batman: Reptilian #1 and thought “oh hey, McKean’s drawing a Batman comic?” I did the exact same thing. Artist Liam Sharp is very much channeling the same uneasy aesthetic Dave McKean brought to Arkham Asylum over thirty years ago. The painted and shadowy figures making their way through a darkness-choked city sets the desperate and tense tone perfectly. This is Gotham City at its most threatening. The city’s dark alleys and looming towers look ready to devour its denizens. Sharp’s designs of Batman and his rogues evoke a sense of fantastical terror and unease.

There’s a clever trick in his drawing of the Caped Crusader. When Bats is speaking to an ally in costume, we can see his face beneath the cowl. However, when Batman is intimidating a criminal, all we can see is the cowl and the cape. Sharp creates an image of Batman that exposes the terror he instills in his targets. His design is a fusion of McKean’s, the early 90’s aesthetic, and even the 1989 Burton film suit.

The Green Lantern artist is proving himself to be a chameleon in the medium. Sharp painting the visuals in Reptilian is a surprise, but one I welcome. Panel layouts and direction are all unique as well. Sharp captures tiny character details in massive panels that often frame only a couple of characters. Mural-esque pieces where the nature of reality is meant to be distorted often follow the former. Panel shapes are also skewed, twisting the reader’s perspective as desired. The letters from Rob Steen are classically simple and easy to read. There are subtle font changes to keep the tone even with the story. Reptilian is a visually outstanding comic that harkens back to a style not seen in nearly thirty years. 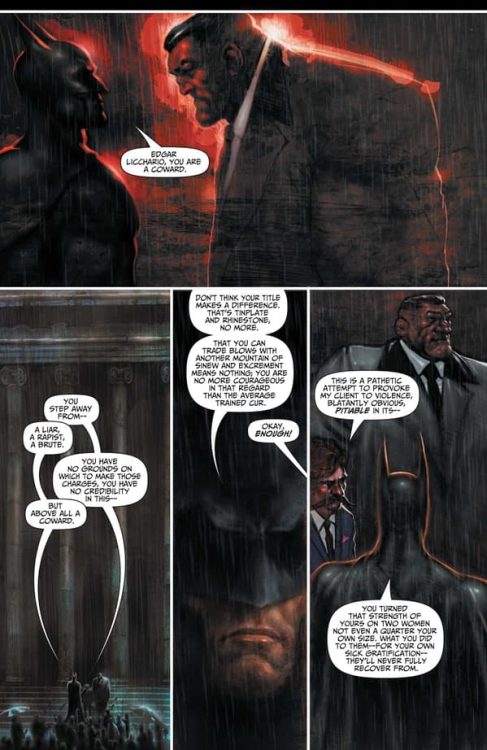 Batman: Reptilian #1 is an unnerving and clever comic with tonally perfect art and intelligent writing. Garth Ennis’s dialogue-heavy script portrays a Batman as a psychological terror, using his words more than his fists or gadgets to instill terror. The painted art of Liam Sharp creates a dark and looming presence on every page that works to break down the already tenuous grip on reality Gotham has. Be sure to grab this first issue of this new mini-series when it launches on 6-22!

Garth Ennis and Liam Sharp craft possibly the darkest and most frightening Batman comic in decades, with a brutal Caped Crusader plumbing the depths of Gotham in the artistic style of McKean's work on Arkham Asylum.Review: The Dark Knight At His Most Terrifying In BATMAN: REPTILIAN #1