Review: Garth Ennis Doing What He Does Best In BATTLEFIELDS: THE TANKIES

Legendary comics writer Garth Ennis and the late artist Carlos Ezquerra, along with inker Hector Ezquerra, colorist Tony Avina, and letterer Simon Bowland, bring us one of the most genuine and compelling war graphic novels in recent memory with Battlefields: The Tankies from publisher Dead Reckoning. This story following the experiences of one particular tank crew sergeant and his men from D-Day to the Korean War is a prime example of intense research and the fantastic character writing we expect from Ennis’s work. With visual work that places us right on the front with these men on the German and Korean fronts, this is an absolute must for readers of great tributes to the people who experienced the hell of combat.

“From the bloody battle for Normandy to the Nazi heartland, from war’s end to the killing fields of Korea, the men of the British Army’s Royal Tank Regiment fight battle after battle against terrible odds. Whether outnumbered or outgunned, the Tankies soldier on—as their motto would have it, “From Mud, Through Blood, to the Green Fields Beyond.” 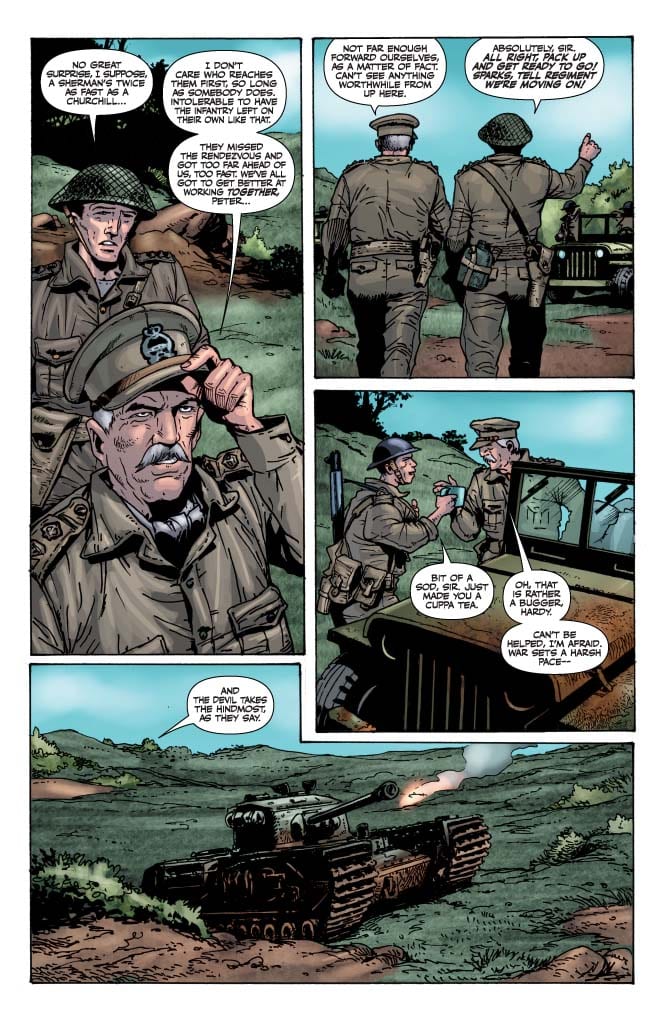 If you have any knowledge of Garth Ennis’s body of work, from his work on Punisher and Fury: My War Gone By to his recent mini-series Sara, you know that he has a mastery of writing from the perspective of soldiers. This carries over to his work here on The Tankies. What makes this graphic novel such a special read is how Ennis is able to nail the personalities and tribulations of these tank crewman, as well as the immaculate research that obviously went into the creation of this story. The main character, a Corporal Stiles who is placed in charge of the crew we follow, is a rugged, experienced, no-bullcrap kind of man who is fascinating and fun to read because of how Ennis brings him to life. He feels like a real human being in a way that is nearly unmatched in all of comics or prose writing. The same goes for nearly every character we meet. Ennis is able to craft these men in a way that makes them animated and realistic in a manner that holds up the story almost entirely on its own. His sense of dialogue is pulled right from the mouths of the British soldiers who this story tributes, with military terminology, slang, jokes, and general conversation being so genuine I’d almost believe Ennis was there himself.

The afterword in this collection has Ennis explaining exactly what research he did and where his inspiration for this tale came from, and it’s a fascinating read for those curious about the men and the circumstances that make up this story. This is Garth Ennis doing precisely what he is best at, and I wouldn’t change a thing about it. 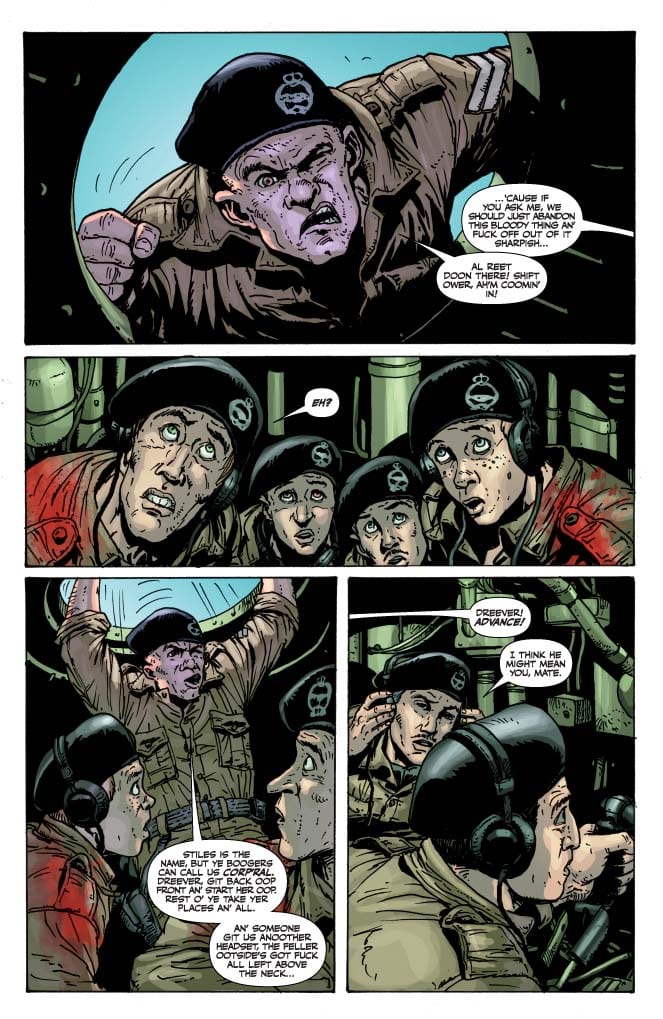 The visual work in The Tankies is thoughtfully crafted by the late and great Carlos Ezquerra’s pencils, Hector Ezquerra’s inks, and the colors of Tony Avina. Carlos’s pencils build a realistic artistic vision of the armaments and terrain of the German countryside and the Korean fronts in these respective wars. Tanks and guns are drawn with a well-researched eye, with the often-talked about differences between the tanks being blatantly obvious. Hell, after reading this I’d say anyone who was paying attention will be able to easily identify the difference between a Panzer, a Tiger, and an Allied Churchill with a moment’s glance. The real highlight of Carlos and Hector Ezquerra’s work here though is the character art. Not only does each man look completely different, but the creases and wear on their faces paints their personalities and toil upon their visage in a way that is rare even in this medium. The inks give those details the depth and dimension that really sells the wear on both the faces of the men and the equipment they use. The colors from Tony Avina are dense and varied, looking again like a well-researched representation of the real setting this book takes place in. Dense green foliage is disturbed by the mottled camouflage of German tanks, and the olive drab of Allied Tanks juts out against the war torn countryside. The letters from Simon Bowland are made up by a consistent and clean font that varied perfectly based on character and tone, the exact kind of stellar work we expect from a pro. Visually, this is a comic story firing on all cylinders and recrerates the very real settings near perfectly. 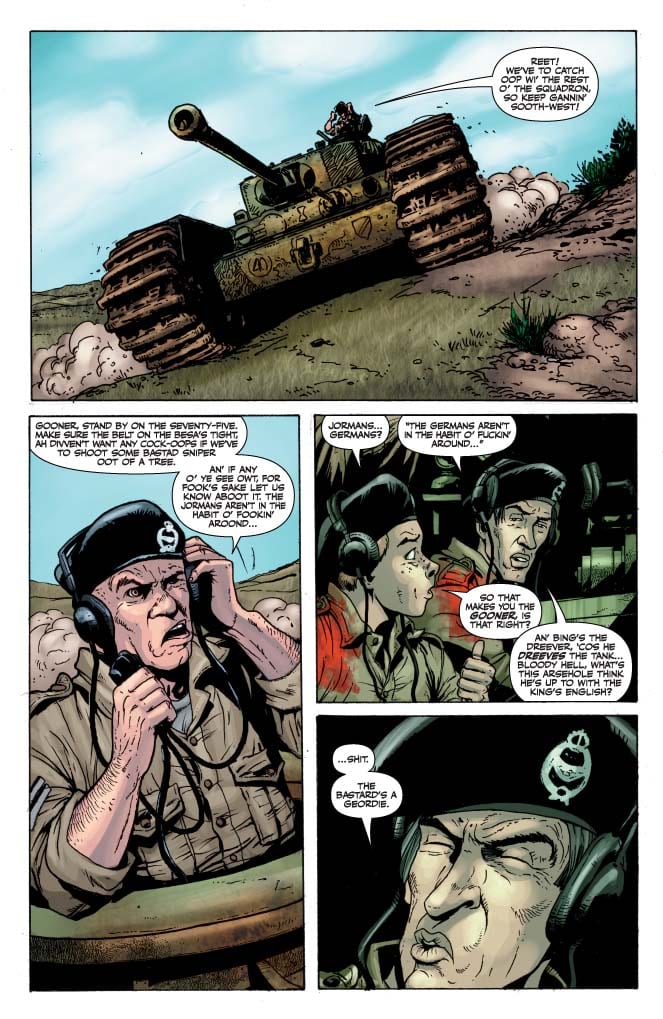 Battlefields: The Tankies is a brilliantly well-written and thoroughly researched tribute to the tank crewman who fought and struggled during the late stages of World War II and the Korean conflict. Garth Ennis does what he does best by presenting a spot-on representation of battlefield conditions and some of his best character writing to date. The visual work of Carlos and Hector Ezquerra and Tony Avina crafts both believable character art and a realistic setting. Be sure to grab this outstanding collection from your local comic shop today!

A genuine look at the trials of British tank crews through the lens of a writer who always does his research and an artist who brings the characters and setting to life in fitting detail.Review: Garth Ennis Doing What He Does Best In BATTLEFIELDS: THE TANKIES