Spencer & Locke 2 #1 is out next week, marking the return of one of the most interesting and poignant comic series to come out in recent memory.

Published by Action Lab: Danger Zone, and co-created by writer David Pepose and artist Jorge Santiago, Jr., the series is about Detective Locke, a man who fights crime with the help of his childhood imaginary friend, a seven-foot tall talking tiger (think Calvin and Hobbes all grown up in Sin City). Following the events of volume one, Locke is on leave from the police force, trying to stay on his best behavior until a number of city officials start dropping like flies. The vicious Roach Riley is in town (a twisted Beetle Bailey stand-in), and he’s created a mystery that promises to drag Spencer and Locke right into the pits of hell.

Click here to read our interview with Pepose and Santiago, Jr. about Spencer & Locke 2! 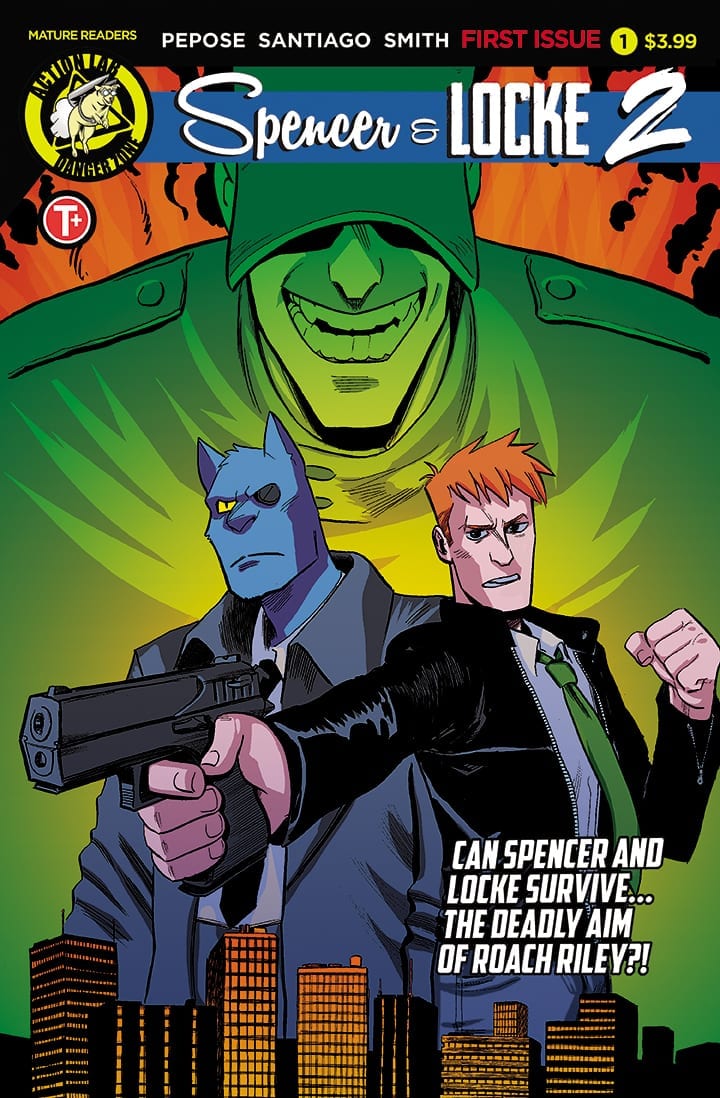 If you haven’t read Spencer & Locke before, have no fear. Pepose makes this new #1 the perfect jumping on point. It’s a completely fresh story that catches the reader up on any pertinent information lickity split. Of course, once you get a taste of this addictive world, you’ll run straight to your local comic shop to order a copy of volume one.

Don’t let the Sunday comics vibe throw you off; this is a series with some serious weight and depth to it. Volume one made that clear, and if Spencer & Locke 2 #1 is any indication, this volume is going to double down on the intensity. We’ve stated on this site before, “it’s one of the most original and thoughtful series out today, tackling childhood trauma and PTSD, and balancing these heavy topics with smart humor, intrigue, and thrills.”

This is a story about trauma, and about how it defines us. Roach is a stark foil for Locke; they’re both broken, but deal with it in different ways. It feels very much like a Batman/Joker relationship is brewing between the two. This first issue actually has some strong Killing Joke undertones, setting up the theme of how one bad day is all it takes to break a person. Spencer & Locke is a beautiful story about humanity, and about learning to live with scars, but it seems like this volume is going to explore that theme in some very dark ways. 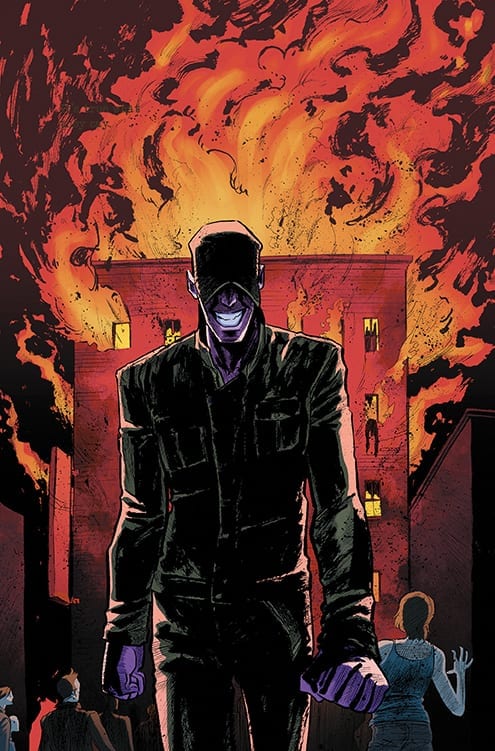 While the story is deep and thought-provoking, it’s also just damn entertaining. Sometimes introspective stories can lean towards being dry and somewhat boring, but not Spencer & Locke. There’s action and intrigue, and fun banter between the characters. This is partially an homage to Sin City, after all. The mystery and noir element is the driving force of the story. You need to know what Roach is up to, and Pepose is such a pro at character development that your connection to these players and your concern for them is real. You worry for Locke on a genuine level.

Jorge Santiago, Jr.’s art, combined with Jasen Smith’s colors, is like nothing else in comics today. The two have created a world that feels lived in and relatable. They definitely play into the cartoony Sunday comics style, but at the same time this world is gritty and rough. It’s unique, and that quality draws you to it on a subconscious level. The two artists are also great at focusing your attention where they want it. Smith will color a page mostly in blues, creating a very mellow, noir atmosphere, but then he’ll throw in a green panel just to make it stand out and throw the reader off. Santiago uses similar tricks. He’ll utilize a very straightforward panel structure, but then something explosive will happen and literally rock the panel boarders. This art team excels at keeping you on your toes and never letting you settle in. They want you on edge.

Letterers are the secret wizards of a comic book creative team, as Colin Bell proves here. Bell manages the book’s tone and characterization without you even realizing it. He’ll switch up fonts and sound effects the same way that Santiago and Smith change up the art, luring you into a false sense of security with traditional lettering and then shaking you out of it with something jarring. His narration boxes help define the characters. Locke maintains a child-like sense of innocence under his tough exterior, thanks largely to way Bell letters the character’s inner monologue. Similarly, Roach Riley’s narration boxes add a Punisher-like spin to his character, adding yet another layer to this tribute to comics.

The point is that there’s a lot of thought and effort being put into Spencer & Locke 2. This creative team clearly has a ton of love for the medium, and they’re putting all of that onto the page. If you like comics of any kind, but especially gritty detective stories featuring imaginary talking panthers, pick up Spencer & Locke 2 #1 next Wednesday. And be sure to look for the series on tons of “Best of the Year” lists come December.

Review: SPENCER & LOCKE 2 #1 Is One Of 2019's Must-Read ComicsOne of the most original and thoughtful series out today, tackling childhood trauma and PTSD, and balancing these heavy topics with smart humor, intrigue, and thrills.