There’s no foundation for a friendship quite like a mutual desire for revenge.

In Space Bandits #2, we see Cody adjust to life on The Crustacean. Thena, for her part, offers advice to help her get by and stay out of trouble. Their relative adjustment doesn’t mean they’ve forgotten their mission, though. Cody seems convinced that the prize fight is her best way out, but Thena has another plan in mind.

Our first issue was like the introduction to a classic western, providing the preamble and laying out the betrayals that motivate the plot. Here, the story develops into more of a prison yard drama-meets-jailbreak story.

It’s been two years since Thena was first sent to The Crust, and with her knowledge of the politics and manners of the place, she does her best to help Cody adjust. We don’t have much of a sense of genuine friendship between the two at this phase of the narrative, though. Instead, they feel like convenient allies, meaning there’s not much pathos built through their interactions. In truth, there’s more sentiment devoted to Thena’s relationship with Cosmo the lizard, than with Cody. Still, their interactions are humorous, and ultimately drive the narrative forward well. They bond over their shared desires for revenge, and that’s enough for now.

Speaking of driving the narrative, the story in Space Bandits #2 moves at lightning pace. Only ten pages elapse between the point at which we learn Thena may have a plan, and the point at which they execute it. The story carries momentum without feeling overly-rushed. What this issue may lack in character development, it largely makes up for with compelling action.

The only real complaint is that there is so much going on, some ideas seem to get a little buried. For instance, Millar notes that the governor streams the bloodsport in The Crustacean throughout the galaxy as a form of entertainment, making a fortune off the slaughter. This could be an interesting avenue for the plot, lending poignant critique of the prison-industrial complex, but it doesn’t seem to come up again. Similarly, the politics within the prison are alluded to, but are primarily used as a plot device to aid Thena and Cody in their escape attempt.

Regardless, the writing is snappy, engaging, and very satisfying. 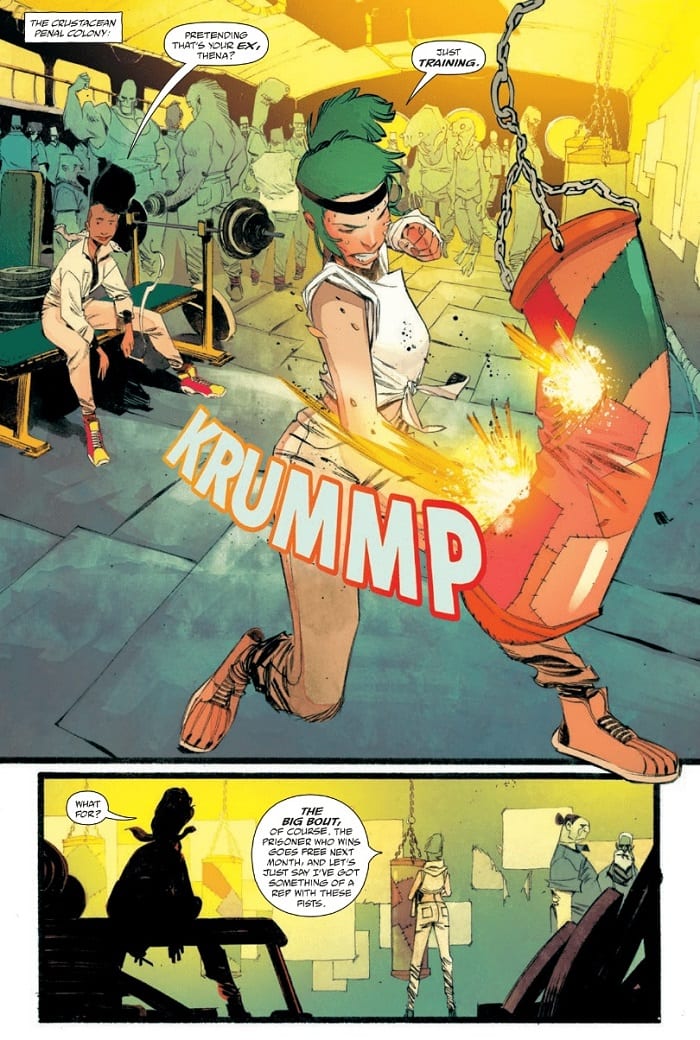 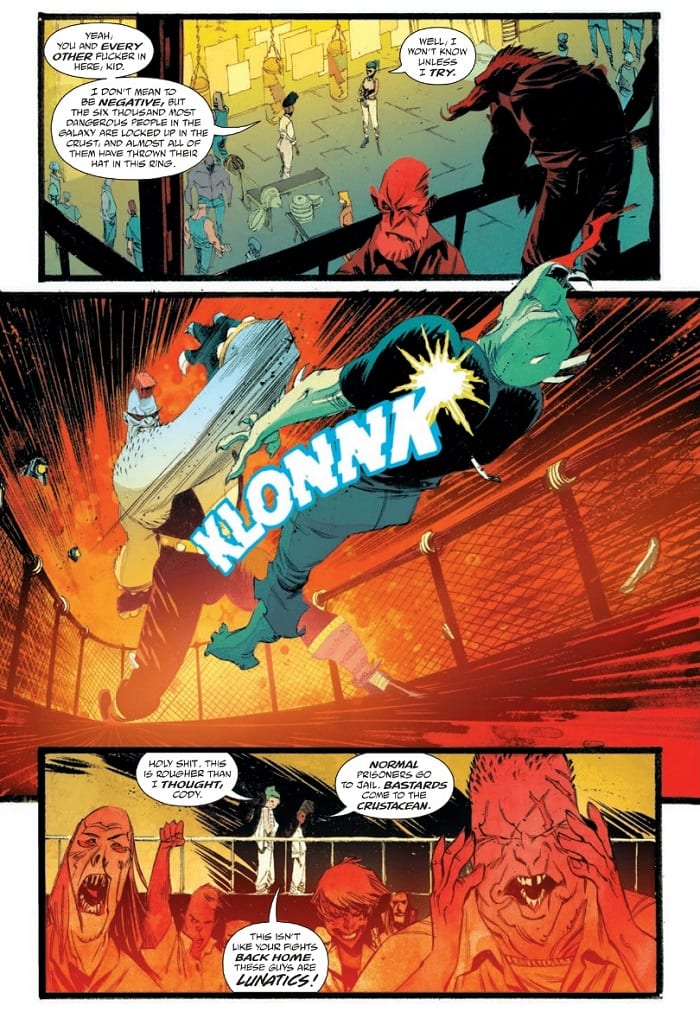 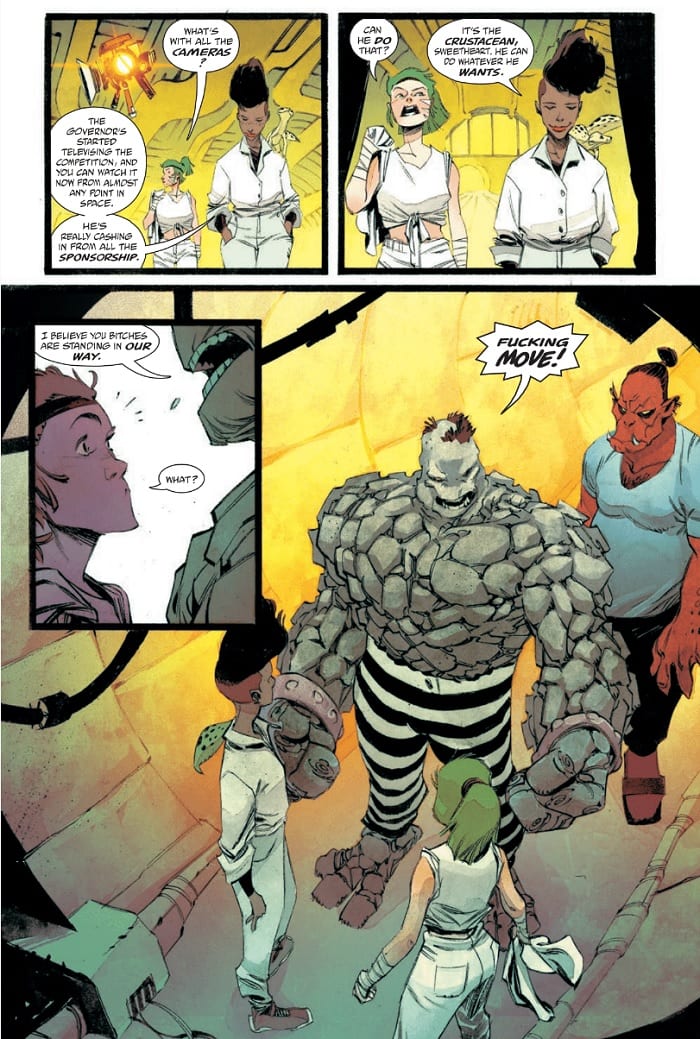 You could pull any panel from the book, blow it up and hang it on the wall as a piece of cyberpunk artwork. Great as it is in isolation, Artist Matteo Scalera doesn’t overlook the need to match the energy of the storytelling.

The visuals in Space Bandits #2 carry a tremendous amount of momentum from one panel to the next. The work is rich, stylized, and sizzles with energy. The final product remains very coherent, though; the reader never feels lost or unsure of what’s conveyed in any given panel.

Scalera has a real knack for visual narratives. It’s not easy to portray alien worlds in a compelling and unique way, while still remaining familiar enough to make the story coherent. His work in Space Bandits #2 achieves this delicate balance, though. Figures as abstract as a three-dimensional, sentient algorithm feel rooted in this world alongside their human parallels.

Scalera conveys a lot of context and meaning through facial expressions. A subtle raising or lowering of an eyebrow illustrates a complex set of emotions. To achieve such expression with such subtle shifts in expression is a sign of a highly-skilled artist at work.

Colorist Marcelo Maiolo’s work plays a key role as well. He employs a bright, ambitious color palette; lots of reds and oranges to match the emotional tone of the book.

Space Bandits #2 continues on the strong trajectory set by our first issue in the series. I expect great things yet to come from this book. Get it August 7 at your local comic book shop.

SPACE BANDITS #2 takes many of the elements that worked in the first book and expands upon them. The book embraces the tropes of prison drama stories, without leaning on them. It's a great next chapter in this ongoing story.Review: SPACE BANDITS #2 Offers Intensely-Entertaining Sci-Fi Prison Drama