Review: Get Some Space Western Goodness With SPACE BANDITS #1

This first issue sets our scene: two bandits, each notorious throughout the galaxy. The tables turn on them, though, when they’re betrayed and abandoned to their fates. Now, they have to find a way to break out of a penal colony in space to seek revenge on their former allies.

The story’s core is a revenge narrative involving a cast of compelling characters focused around Thena Khole and Cody Blue. Space Bandits #1 reads like a prologue to a much larger story. It establishes our protagonists, and lays out clear motivations for their characters. Not only that, it presents an impressive scale for the characters’ inventive world.

To that point, the real strength in this first issue is the stellar worldbuilding. It’s a solid balance of serious and zany elements that pay homage to classic tropes, presenting with great creative vision. Like, we’re talking space cruisers with ten-story Lionel Richie figureheads and mining colonies set up on giant floating space-god lobsters kind of stuff here. It’s presented with a straight face and commitment to the bit, though, echoing the works of Terry Pratchett or Douglas Adams in that regard.

Millar lays out the narrative well in Space Bandits #1. There’s sparse narration or direction, yet the reader never feels lost as we move from one alien setting to the next.

The characterization is another strong point in the book. Although as mentioned, it embraces plenty of age-old tropes, it pays homage to the cliches, rather than leaning on them. The characters manage to feel fresh in context. There’s a level of dimension to them, elevating them above generic stock archetypes. It’s excellent writing all around. 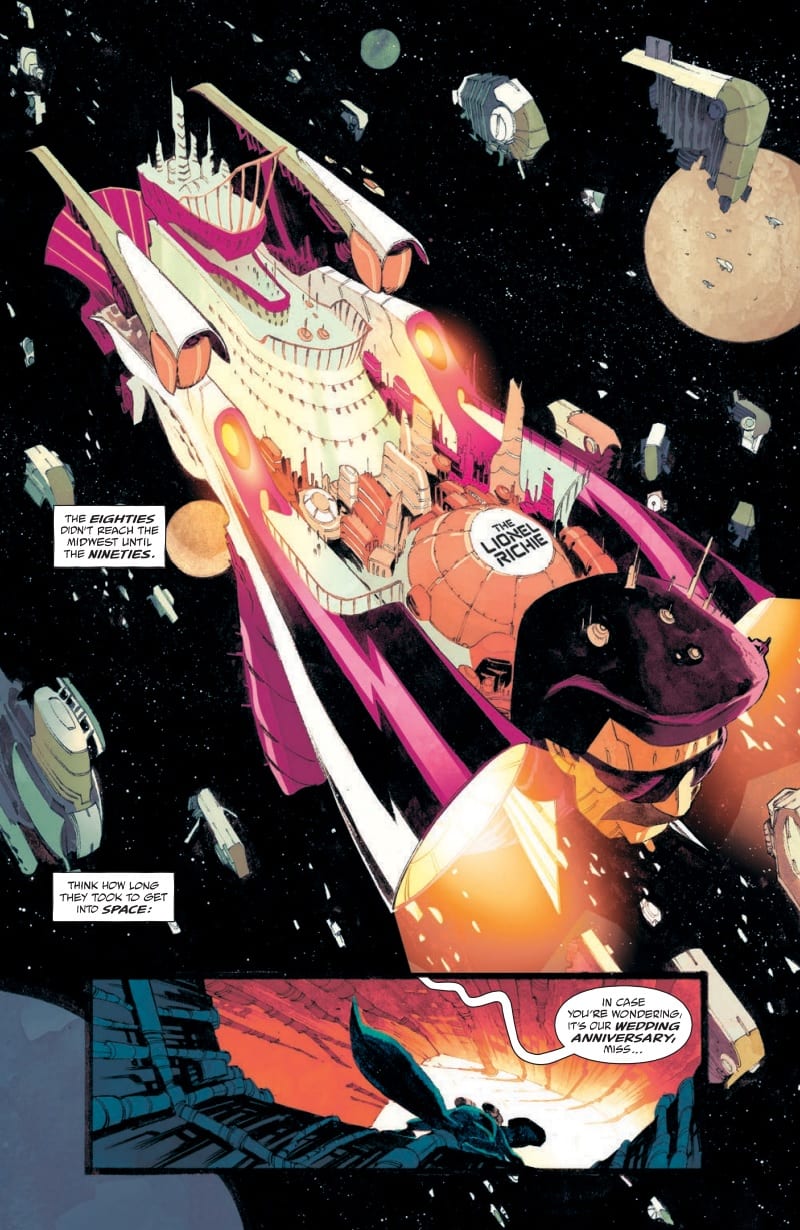 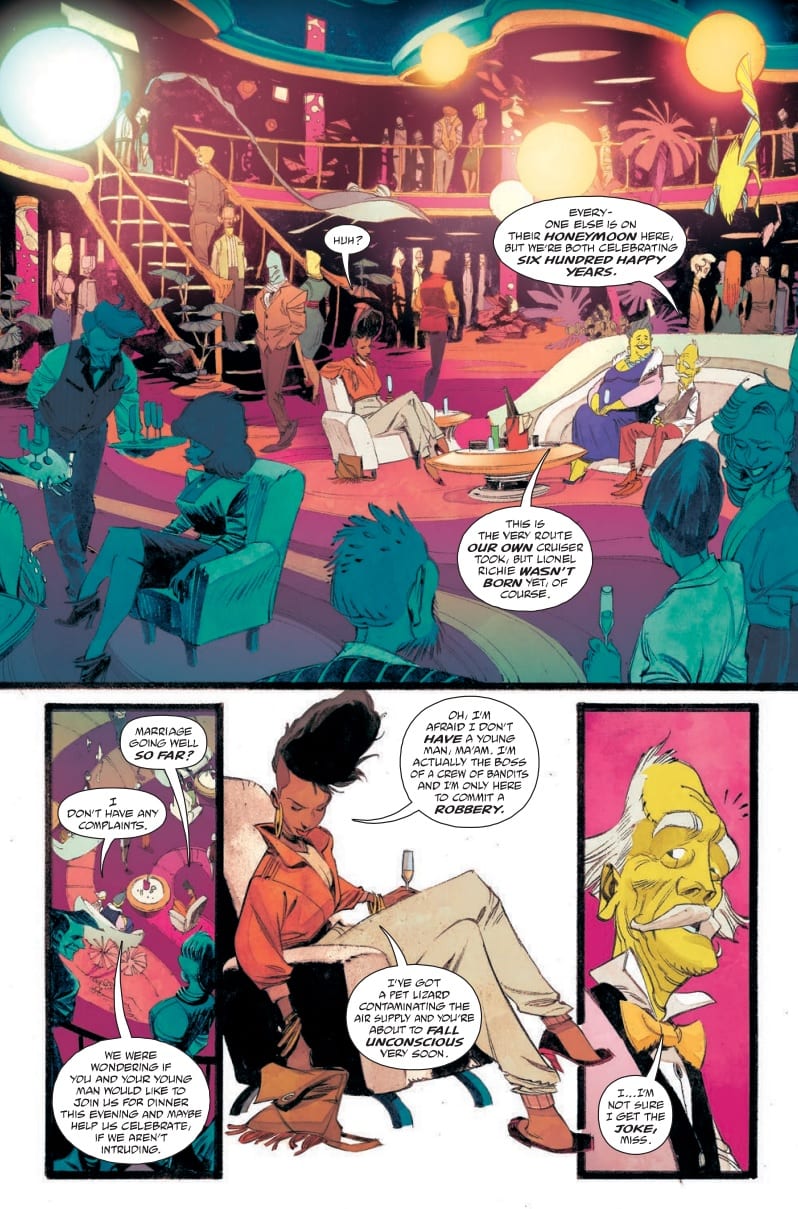 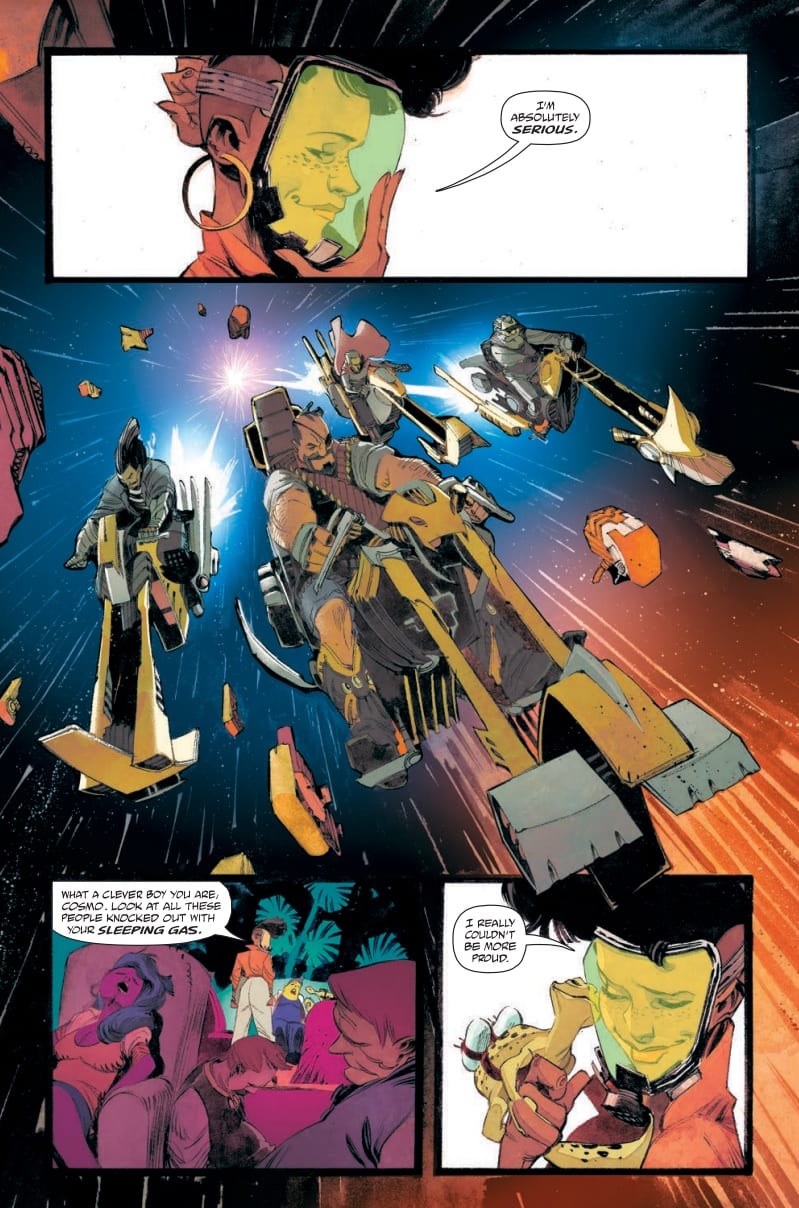 Scalera’s visuals in Space Bandits #1 strike a delicate balance between refined and cartoonishly animated. Everything has a great sense of vivacity with dynamic images that flow well and match the story beat-for-beat.

The illustrations are detailed and well-composed. We’re not looking simply at a sequence of images that follow the story; rather, Scalera manages to make the visuals leap off the page. It’s vibrant, expressive, and eye-pleasing from beginning to end.

Marcelo Maiolo’s colors play a major role in bringing the art to life as well. He employs an incredibly rich palette that is equal parts space disco and gallery-worthy artpiece. The colors work in perfect tandem with Scalera’s illustratzions to produce a visually-striking final product.

SPACE BANDITS #1 lays out a vision for a great story which embraces genre tropes, but never leans on them. Interesting characters and strong worldbuilding are the backbone of the narrative here. It's a great ride.Review: Get Some Space Western Goodness With SPACE BANDITS #1