Cathartic, fun, and constantly surprising, Sins Of The Black Flamingo #1 is a wonderfully unique gem of a comic book and a salve for the burning insanity of our current reality.

From writer Andrew Wheeler (Another Castle, Love And War) and artist Travis Moore (Nightwing, The Wolf Among Us) comes a cathartic comic about a fabulous Robin Hood taking some…choice artifacts from their wealthy captors in Sins Of The Black Flamingo #1. Featuring colors from Tamra Bonvillain and letters by Aditya Bidikar, this first chapter is a hilarious and compelling salve for the disturbing reality we currently inhabit. With a script that is as surprising as it is engaging and absolutely stunning visual work, this is easily one of the best first issues of the year so far.

“OCCULT NOIR. MIAMI SLEAZE. Sebastian Harlow is the Black Flamingo, a flamboyant and narcissistic thief who gets his kicks stealing mystic artifacts from the wealthy and corrupt of Miami’s occult underground. When his latest job leads him to his biggest score so far, the hedonistic outlaw discovers something he wasn’t looking for—something to believe in.” 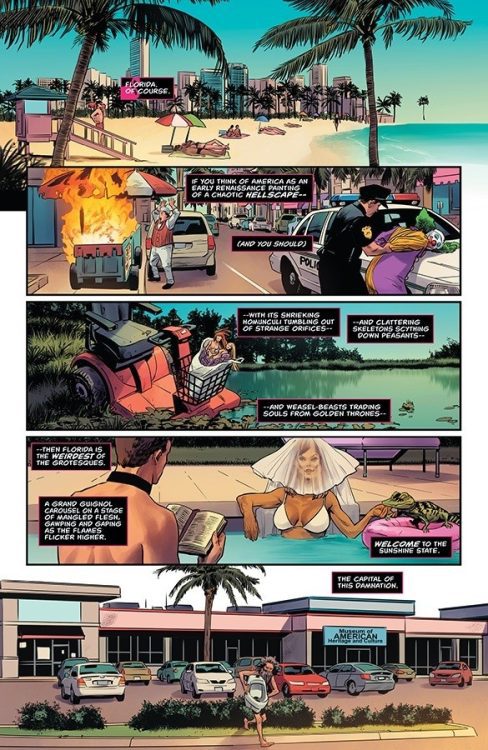 What Andrew Wheeler has done with  Sins Of The Black Flamingo #1 is mix attitude-filled sleazy comedy with cutting societal commentary and dump in a bucket of supernatural mystery. What starts out as a particularly flavorful heist comic surprises its readers by presenting them with sudden very mystical and haunted hijinks. Equal parts Catwoman: When In Rome, Oceans 11, and The Birdcage, this inventive issue is constantly finding new ways to engage the reader while maintaining a consistent tone. Our debonair protagonist Sebastian Harlow is immediately likeable. His charm and confidence exudes from every panel (mostly due to the art, but we’ll get to that later) thanks to both his dialogue and his overhead narration. All of his word balloons are loaded with sass and snark, but it’s his commentary that really lets this book land in the right spot for this point in history. While Harlow’s words may cut a bit cynical for some, there’s an acidic bite to them that just feels right for how wildly bad the situation is mid-2022. The discussion of America as little more than a giant geographical trashfire that decent people can only hope to scrape by during feels cathartic and spot-on. There’s also a healthy amount of raging on the wealthy and great moments of cultural inclusion that makes this comic as meaningful as it is entertaining. All of this, plus plot points that will keep readers constantly surprised, help this first chapter to be one of the most cleverly written comics of 2022. 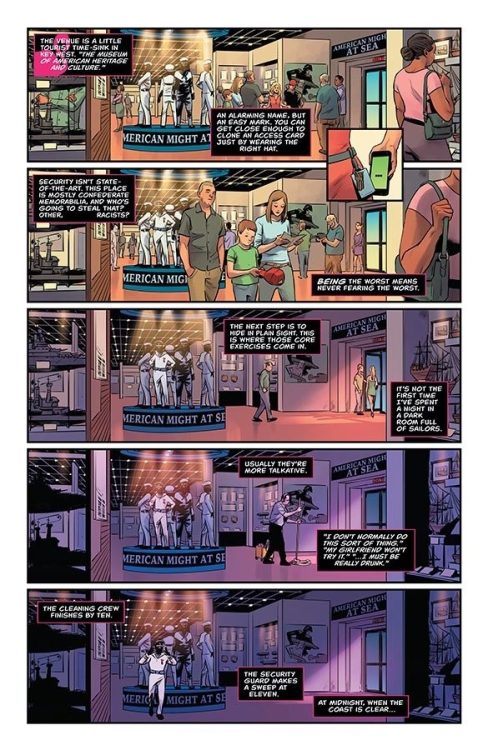 A glamorous protagonist deserves equally glamorous visuals, and Travis Moore delivers in spades. The former Nightwing artist brings along his stellar animations and character acting, combining them with sharp composition and detail. All of his character models are completely unique, from the absurdly handsome Sebastian Harlow to a random vagabond running in his underwear through Florida streets. Moore’s characters are a blast to witness as they interact and move through the story, making the already compelling plot many times more engaging. Moore has a great eye for bringing the deranged, teetering on complete insanity state of Florida to life as well. From the glitz of Miami’s wealthiest, to a scorched and humid parking lot in the middle of Key West, the liminal and chaotic nature of the Sunshine State is well captured here. Moore’s panel and page composition perfectly sets this comic’s pace as well. The comic’s opening sequence, which shifts from random snapshots of Floridian life to a fantastic heist scene, feels almost like a Soderbergh film. The deliberate manner with which ever page is blocked envelops the reader in this book’s tone, and makes every wild reveal feel just as massive and unexpected as it should.

Tamra Bonvillain, one of the best doing it today, is on hand for colors in Black Flamingo and she kills it as always. The sunshine and neon palette perfectly captures both the flamboyance of the book’s aesthetic, as well as the humid decay of the state it takes place in. There’s a high-fidelity sheen to the entire comic that makes the pages irresistible to ponder. This is mostly due to just how stunning Bonvillain’s work is. The lettering from Aditya Bidikar is, unsurprisingly, as readable and tonally rich as ever. The fonts shift naturally with character tones and Bidikar uses multiple styles based on what manner of character is speaking. The pink-on-black of the narrative boxes is the perfect touch to carry the tone of this comic’s reading experience. Overall, Black Flamingo is a stunning and aesthetically masterful comic book. 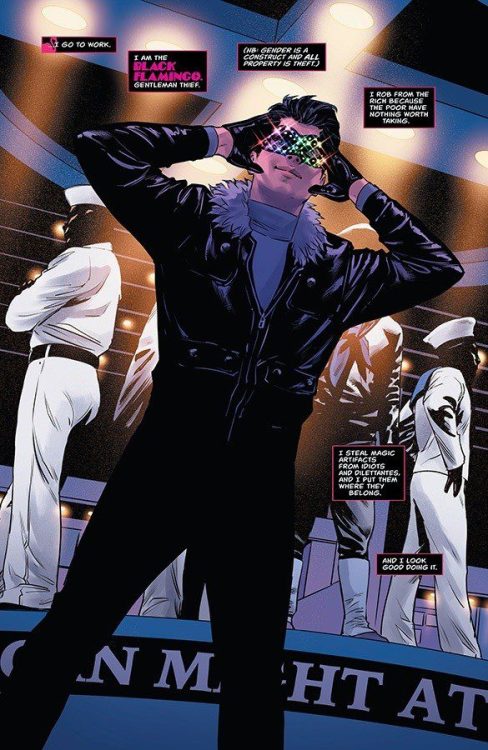 Sins Of The Black Flamingo #1 is a stupendously fun, unique, and cathartic comic experience. Andrew Wheeler’s script is incisive, snarky, and genuinely compelling, with twists and reveals that will constantly surprise readers. The visuals from Travis Moore and Tamra Bonvillain are gorgeous and brilliantly composed, crafting a vivid aesthetic and great pacing that will fully engage you into the reading experience. With all the horrid insanity of recent events, this comic deserves your full attention – so be sure to grab it when it hits shelves on June 29th!

Cathartic, fun, and constantly surprising, Sins Of The Black Flamingo #1 is a wonderfully unique gem of a comic book and a salve for the burning insanity of our current reality.Review: SINS OF THE BLACK FLAMINGO #1 - A Diamond Forged In A Trashfire