Why You Should Read: Shade The Changing Girl/Woman

In 2016, writer and My Chemical Romance frontman Gerard Way came together with DC Comics to create the Young Animal imprint. This imprint would function similar to how the original Vertigo imprint did back in the 1980’s, with new writers breathing life into failing or nearly forgotten characters and giving them a contemporary twist. The initial lineup of books included Way teaming with artist Nick Derington for a new Doom Patrol as the imprint’s flagship title. He also collaborated with writer Jon Rivera and artist Michael Avon Oeming for a resurrection of long-forgotten Silver Age spelunker Cave Carson in Cave Carson Has A Cybernetic Eye. They even added a new (and genuinely really cool) Gotham vigilante with Mother Panic, created by Way, Jody Houser and Tommy Lee Edwards. While I consider every one of these to be fantastic and upsettingly overlooked (except arguably Doom Patrol, generally considered the best run on that property since Morrison), the one I feel most attached to is Cecil Castellucci and Marley Zarcone’s Shade the Changing Girl and its sequel Shade the Changing Woman. This soft sequel to Peter Milligan’s criminally underrated Shade the Changing Man from the Vertigo wave ( incidentally a reimagining of the Steve Ditko character of the same name) is an emotionally sincere, unique, psychedelic, and beautiful piece of storytelling about growing and learning to embrace the people who stand by you. 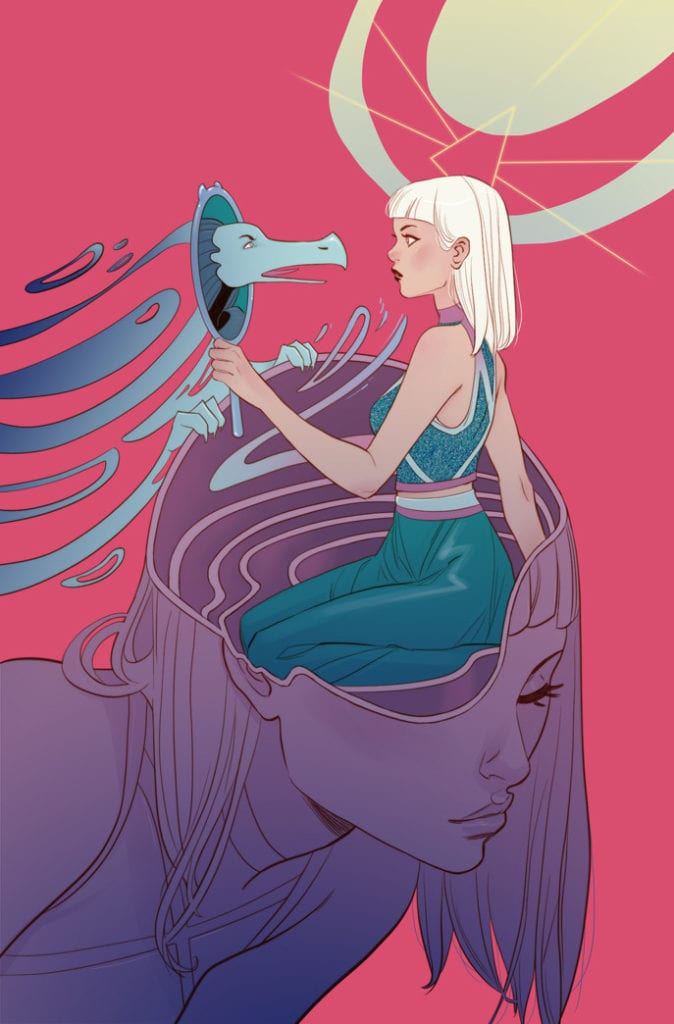 “There’s no such thing as a little bit of madness. Far away on the planet Meta, Loma’s going nowhere fast. She’s dropped out of school, dumped her boyfriend, and is bored out of her mind.  She longs to feel things. That’s where her idol, the lunatic poet Rac Shade, and his infamous madness coat come it. Loma steals the garment and makes a break across galaxies to take up residence in a new body: Earth girl Megan Boyer. Surely everything will be better on this passionate primitive planet with a dash of madness on her side and this human girl’s easy life. Only now that she’s here, Loma discovers being a teenaged Earth girl comes with its own challenges and Earth may not be everything she thought it’d be. Megan Boyer was a bully whom everyone was glad was almost dead, and now Loma has to survive High School and navigate the consequences of the life she didn’t live with the ever-growing and uncontrollable madness at her side. Not to mention that there are people back on her homeworld who might just want Shade’s coat back.” 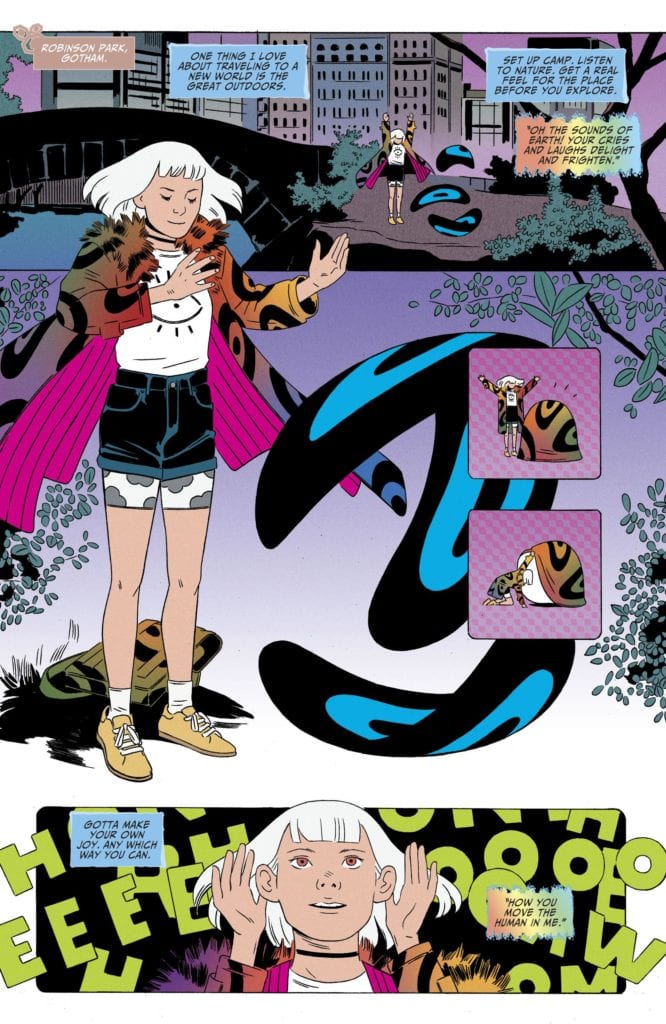 Don’t let the fact that Shade The Changing Girl is a sequel hold you back from reading it. While there are some references and context to be gleaned from having read Milligan’s series, Castellucci and Zarcone’s comic is perfectly digestible on its own. Treating Rac Shade (Milligan’s protagonist) as a sort of disembodied and nearly forgotten celebrity is appropriate for both the messaging of the prior comic and its elusive real-world status. Girl/Woman is a sort of commentary and inverse of Milligan’s comic. Loma receives much more personal development and awakening as a person while wearing the madness vest than Rac did, even with Loma starting out worshipping the prior comic’s mad poet protagonist. Where Man contained that classic British snark combined with unapologetic strangeness and imagination, Girl/Woman combines the latter of these styles with a modern teenage yearning. Its visions of aliens, interspecies love, and plots to destroy the Earth are brought back around to the complex interpersonal relationships that are warped and rebuilt by the context of Loma’s entering our society. The big twist? She does it by possessing the body of a recently deceased high school student. This series is as much a psychological deep dive as it is a psychedelic space adventure, and these elements work in tandem to craft one of the most unique comics of the past decade. 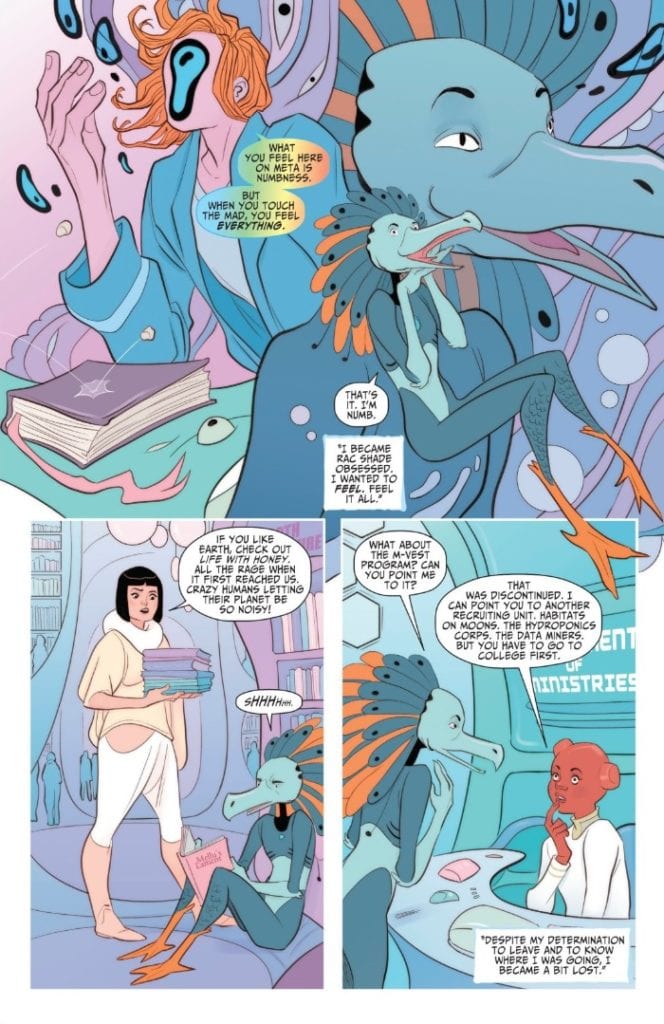 Cecil Castelucci’s writing throughout this series swings from poetic narration to the grounded, expression-filled dialogue of modern-day teenagers. Loma herself is an edgy, madness-obsessed experience hunter whose obsession with following in Rac Shade’s misbegotten footsteps has landed her in a situation she doesn’t realize she wants to be in. At the same time, the recently deceased high schooler whose body she has possessed was popular for all manner of conniving, unsavory reasons. This comic explores the concepts of idol worship, contentment, sexual attraction, and the old adage of “the grass is always greener,” while also staging the rising threat of interstellar war in the background. This comic does a lot, and while it can certainly seem overly weird and convoluted to certain readers, lovers of this kind of artful discussion and oddity within comics will find an absolute gem here. There is an intense beauty within this series’ words and events, and it is emotionally and mentally uplifting for the right crowd.

As brilliant as the writing is in this series, the visuals will reach out and drag your eyeballs across each issue’s panels. Becky Cloonan’s ever-inviting covers are mesmerizingly colorful and full so of personality that matches the vibe of the story that you’ll wish she drew the interiors as well; that is, until you see Marley Zarcone and Kelly Fitzpatrick’s panels. This comic is a masterwork in creative comic design, with panels utilizing the reality-bending nature of Loma’s madness vest to create psychedelic floating transitions from one sequence to the next. The comic has a dream-like feel to its composition that works perfectly for its poetic words. The character and environmental art contrasts  to these wildly colorful oddities, with a simplicity and flatness that is strangely perfectly fitting. The detail in character animations and different designs is made up by very fine pencil work from Zarcone, with thicker lines that create open spaces for color to fill in. Fitzpatrick’s colors are the artistic highlight of this series, with all of the big mind-bending forays into madness and the illustrations of alien worlds being given a massive array of hues that thematically fit the scene. Earth is often portrayed in a rather small and comparatively dull visual range, while the planet Meta is a little more varied but still has a similar situation. The insane trips into the artistic world of Loma’s experimentation with madness explodes with life however, and is the main visual draw of the comic. This is one of the most visually unique comics from the past decade, and it’s a gorgeous experience from beginning to end. 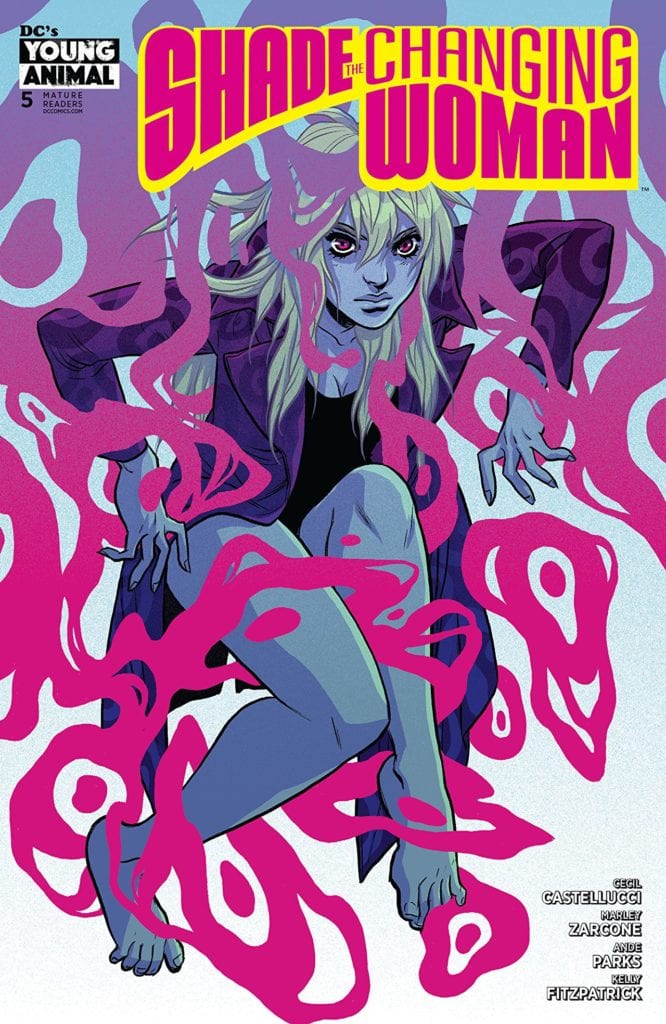 Shade The Changing Girl and its sequel Shade The Changing Woman are fascinating and deeply insightful forays into human emotion, desire, and art. Castelucci’s thoughtful and poetic scripts intermingle with realistic character concerns and troubles that make the world here seem tangible although it is quite literally always on the brink of absolute madness. Although certainly not for everyone , I still wholeheartedly believe this is one of the most underrated and under read comics of the past decade, and an absolute gem in DC’s Young Animal lineup.