Review: SHARK OF WAR #2 Is Filled To The Gills With Campy Violence

The first issue of SHARK OF WAR is chock full of campy sci-fi and excessive violence, great for fans of those straight-to-video science fiction/horror movies. Now the USS Gnasher (the titular shark of war) is back to take a bigger bite out of the evil that lurks in the murky depths of the ocean.

Written and illustrated by Ben Lacy, with lettering by Nikki Powers, Shark of War #2: A Parade of Piranha is now available to support on Kickstarter.

In issue 1, ‘The New King of The Sea,’ we learned his origin and how he came to take on everything bad happening on the Eastern Seaboard. In issue 2, A Parade of Piranha, the bad strikes back. They’ve hired one of his creators to make creatures even deadlier than he, piranha who’ve been modified just as he has. But there are hundreds of them.

What stands out most in the writing is the humor. Lacy doesn’t take his story too seriously. Just read the title – Shark of War. You can’t help but smirk at the daffy concept. From the cover to the very last panel, Lacy jumps the shark (don’t forgive the pun) every chance he can. There’s also the humorous dialogue, particularly the interactions between the Gnasher and its on-board artificial intelligence. In short, just go in expecting some cheese and laughter, and have some fun with it. 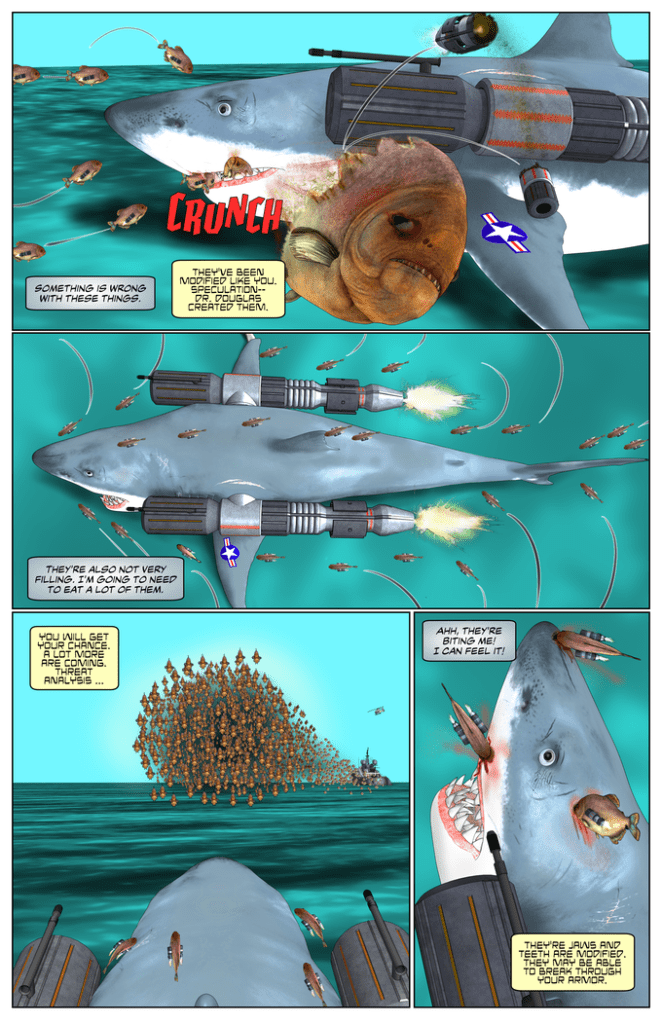 Again, Lacy’s artwork is a unique, computer generated style in Shark of War #2. It looks like as if it were rendered in a Sims game. This style helps enhance the campiness of the concept, crafting this b-horror world akin to Sharknado or The Meg. If you’re looking for artwork filled to the gills with blood, gore, explosions, and aquatic creatures equipped with military-grade weaponry, this is the book for you.

This is b-movie horror/sci-fi in comic book form. It’s filled to the gills with blood, gore, explosions, and aquatic creatures equipped with military-grade weaponry. In short, just go in expecting some cheese and laughter, and have some fun with it.

Show your love for indie comics by helping fund Shark of War #2 on Kickstarter. You can also follow Biting Comics on Facebook for updates and extra tidbits.

Are you an indie comics creator with a recently published comic book, or one that you’re about to put up for crowdfunding? Let us know!