Sharks. These carnivorous creatures of the seven seas peak our interests and swim through our nightmares. Since Steven Spielberg brought Jaws to the silver screen in 1975, generations of people have been hesitant to even dip their feet in the ocean. And it didn’t stop there. The demand for sharks in popular culture has ebbed and flowed over the decades, with a need to ramp up the terror and camp in how they are presented on screen. There have been giant sharks, cartoon sharks, smart sharks, sharks with frickin’ laser beams on their heads, billionaire sharks, sharknados, and prehistoric sharks, to name a few.

Where can they possibly take sharks next? Were you thinking of an intelligent, weaponized, flying, augmented shark built in a secret government facility? Then you might want to pick up this new comic book.

Written and illustrated by Ben Lacy, with lettering by Nikki Powers – this is Shark of War #1.

It’s Jaws if the shark were the hero. It’s Robocop if the cop were a shark. After a massive bioengineered shark escapes a secret military lab, he makes himself the law of the sea. Able to fly, bullet proof, and armed with guns and teeth, he cuts a swath through the bad guys. But the Mob and the evil scientist who created him have a plan to stop him – make even more dangerous creatures.

This book was clearly written by someone with an engineering background. Such is the case with Ben Lacy, who utilizes 30 years worth of knowledge and professional experience to craft the story and dialogue of Shark of War. There is a considerable amount of technical and military jargon. Mix that with camp and excessive violence, which this book is chock full of, and Shark of War fits perfectly in with this recent era of over-the-top shark sci-fi like The Meg and Sharknado. 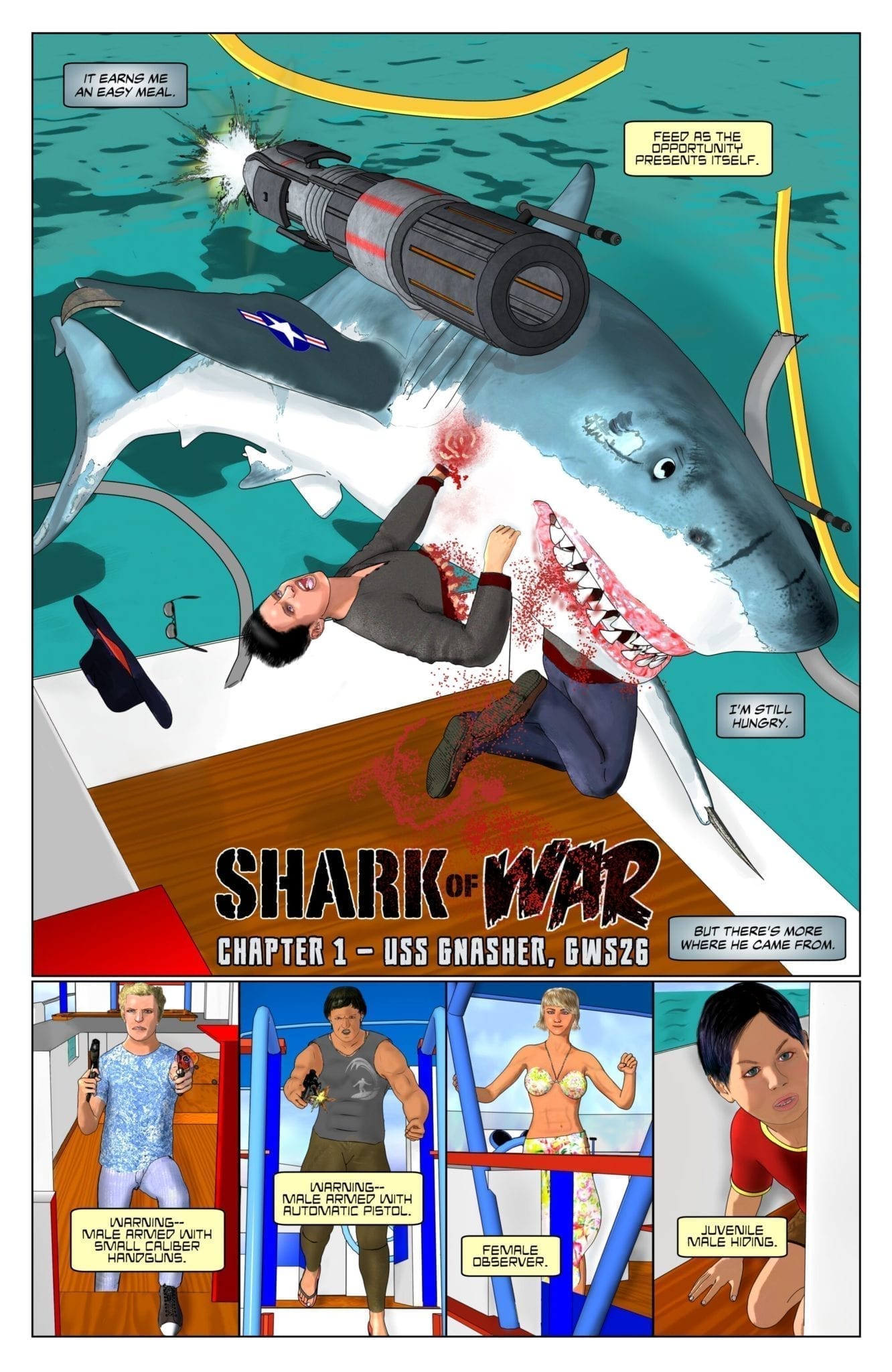 Lacy’s artwork is a unique choice. You won’t find any traditional comic book line work here. Instead, he opts for computer generated characters and scenery, akin to The Sims. This untraditional artwork style only adds to the exaggeration and campiness that you’ll find in Shark of War. It’s also a testament to creator Ben Lacy, who wanted to make a comic book, and turned to what he knew best to create the artwork – computers. Indie comic book creators, take note. If you have an idea and are passionate about it, do anything you can to get it done and out there.

Show your love for indie comics by supporting Shark of War #1 on Kickstarter. You can also follow the book on its Facebook page for updates and extra tidbits.

Are you an indie creator with a recently published comic book, or one that you’re crowdsourcing? Let us know!