Review: RORSCHACH #4 and the Dangers of Cultism

DC Comics’ Rorschach #4 is not an easy read. That’s not because it’s not good or clear. In fact, it’s devastatingly clear. No, Rorschach #4 is hard to read because it feels right on the money. Writer Tom King, artist Jorge Fornes, colorist Dave Stewart and letterer Clayton Cowles put forth an issue that discusses insanity. But it’s an insanity that feels dangerously accepted.

King introduces us to a new character in this issue. A strongman from a circus who knew Laura Cummings, the Kid, very well. In this issue, King begins to show how big the image of Rorschach has become. Rorschach is no longer just a man, he’s a way of life. And the beliefs of The Kid and Muscles, the Man Mountain, feel both insane and strangely believable. We see The Kid’s obsession with Rorschach is not something that’s new. She’s practically begun her own cult.

And watching Muscles respond to question after question, King shows us how deeply the Kid’s roots go into her followers. Logic can’t stand against a cult. Every moment that our detective protagonist tries to push Muscles to see the truth, is met with a vacant smile. King isn’t grasping at straws here. He’s, sadly, depicting what it’s like when someone can do no wrong in your eyes. That’s why this issue feels so timely. 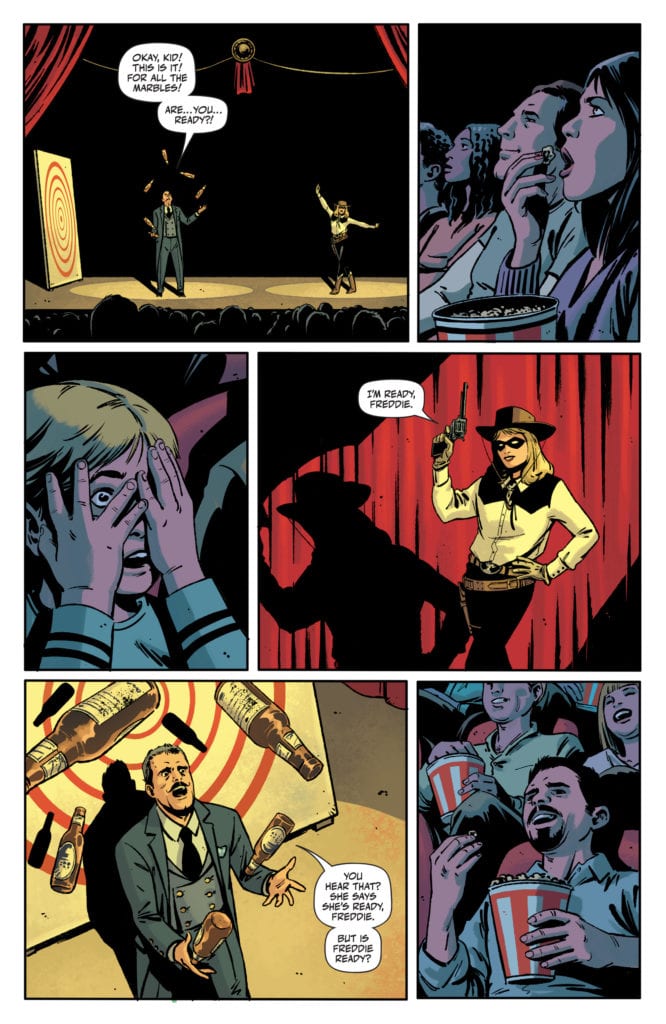 Fornes seduces us into accepting this dangerous view of the world as normal. Not only do all of the interactions between The Kid and Muscles seem completely innocuous, but Fornes dives right into typical comic book action. We see Rorschach and a supervillain on a rooftop or Rorschach pummeling crooks. Fornes makes it look like any ol’ comic. His sound effects do the same. The “AAAAAAAAAAA!” of someone falling down an elevator shaft is playful. The “SKRKKRKKK” of them hitting concrete is minimal and muted. Fornes is highlighting the fun in the brutality, not the consequences of it. He’s showing us how someone could get lost in the high. How someone could lie to themselves and believe it. 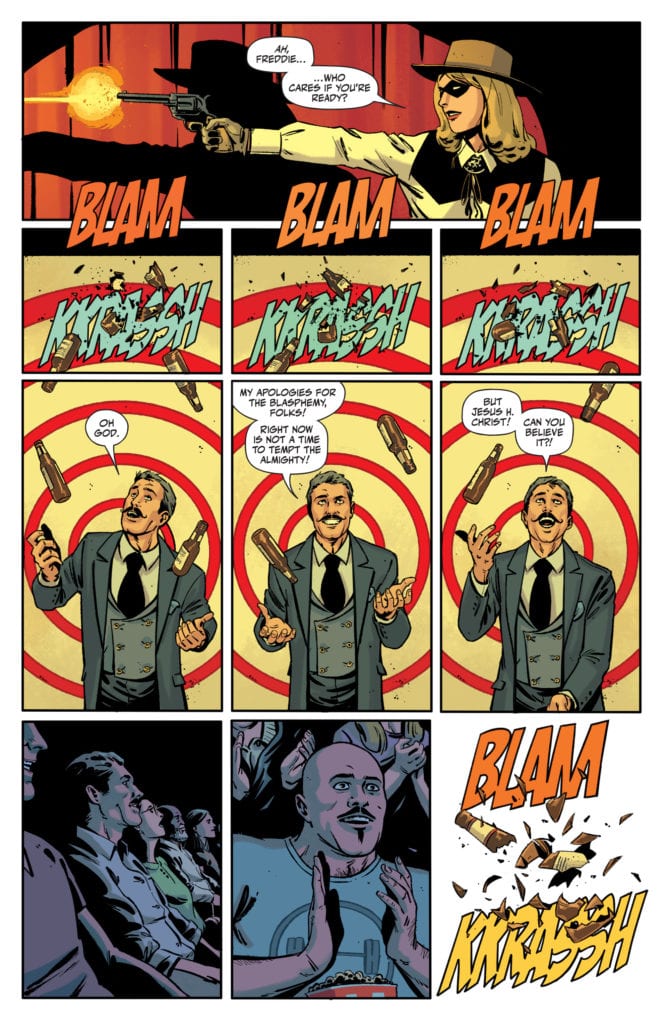 Stewart makes this issue beautiful. The beautiful lie Muscles is telling himself. When Rorschach is on the rooftop, having a showdown with a dramatic villain, Stewart sets the stage fantastically. In fact, fantastic is the right word for it. It’s a fantasy lighting that gives each moment a sense of relevance. But something changes when Rorschach drags the villain inside. The greenish hue of fluorescent lighting is like a wake up call. And the red panel of someone plummeting to their death is like a smack in the face. It’s a reminder. This might look beautiful, it might seem steeped in relevance and honor, but it’s brutal and unhinged.

Rorschach #4 has one hefty script. But part of what makes it work is how Cowles punctuates scenes with short lines. Separated from the rest of someone’s dialogue, Cowles finishes a monologue by leaving a final line alone on the page. These are the lines that get under the detective’s skin. “See, that’s just me,” Muscles says after describing a particularly disturbing scene. Muscles’ nonchalance is terrifying. “I wasn’t crazy,” Muscles says after a speech that definitely sounds psychotic. Cowles underscores Muscles’ most dangerous lies. He doesn’t let them get lost in the rest of Muscles’ tirades. 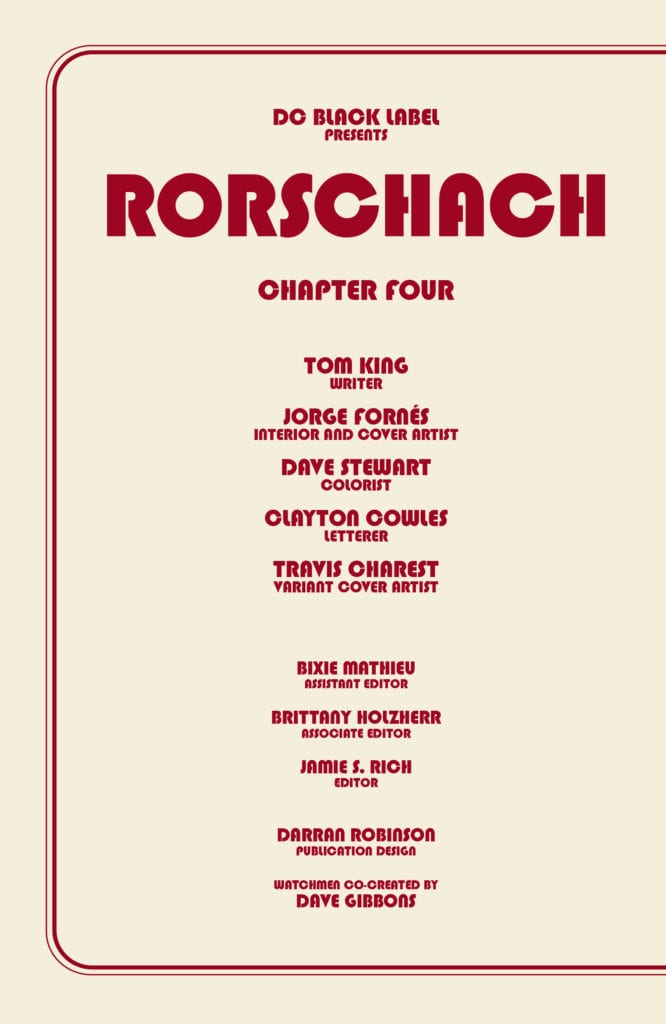 DC Comics’ Rorschach #4 is terrifyingly normal. Our new character, Muscles, the Man Mountain, is completely bought in to the lies he’s been told and the lies he’s told himself. King, Fornes, Stewart and Cowles tell a story we need to hear. They show us how easy it is to fall for a narrative that makes us the center of the universe. It’s another chapter in a series that has its finger on the pulse of our historical moment. Pick up Rorschach #4, out from DC Comics January 19th, at a comic shop near you!

DC Comics' RORSCHACH #4 is terrifyingly normal. Our new character, Muscles, the Man Mountain, is completely bought in to the lies he's been told and the lies he told himself. King, Fornes, Stewart and Cowles tell a story we need to hear. They show us how easy it is to fall for a narrative that makes us the center of the universe.Review: RORSCHACH #4 and the Dangers of Cultism