Writer Tom King, artist Jorge Fornez, colorist Dave Stewart and letterer Clayton Cowles take their time in DC Comics’ Rorschach #2. There’s no rush to the action. Instead, this creative team unfolds the drama slowly. So much of this issue just feels like normal life. No car chases, no heat vision, just humans getting themselves into trouble. 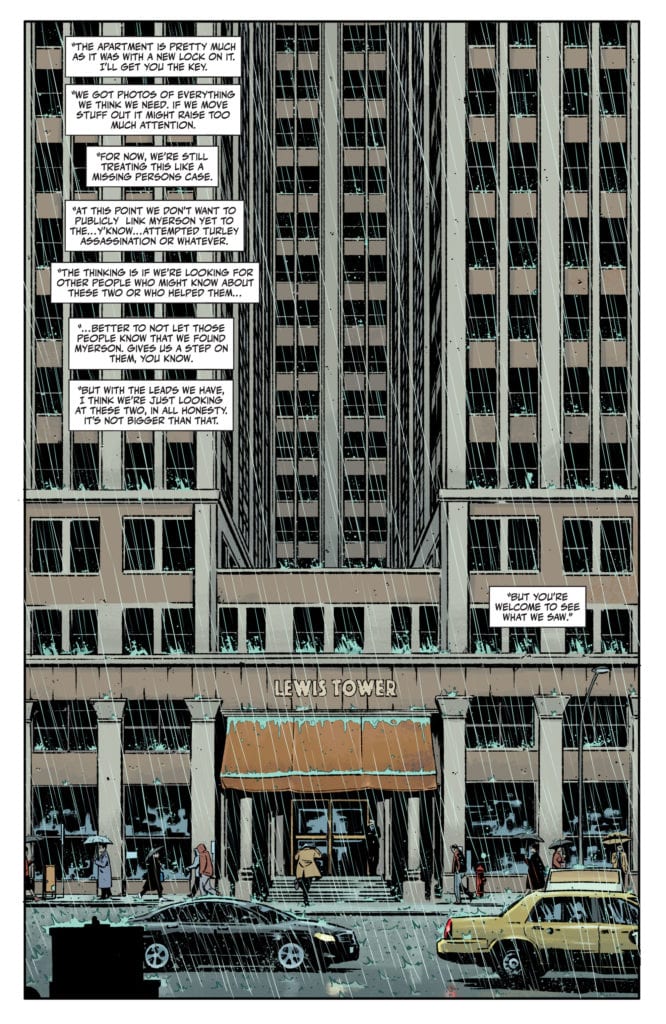 King continues to take a rather text-heavy approach in this series. It fits. We’re following a detective, piecing together the backstory of his “Rorschach.” Every character he interviews has a lot to say. Interestingly, they don’t tend actually to communicate much. Some seem like they’re looking for meaning. How can they find something in their memories that makes their connection to Myerson meaningful when the man was just so damn normal? Others seem to be insisting there isn’t much meaning to their connection to Myerson. So, King manages to fill his pages with text, but the story goes on between the lines. That’s what makes this script work—the meaninglessness of the dialogue, whether it’s the speaker railing against it or hiding behind it.

Fornes uses repetition to show how close our detective is to figuring out these hitmen. We see the detective walking through the same scenes Myerson was in. At one point, Fornes even makes it look like the two will interact. We see Myerson’s empty apartment. In the next panel, we get Myerson at his desk, looking over to the door. He gets up and walks over to it. By that time, the detective has walked into frame. Like ships in the night, they’ve passed each other. But that’s because these moments are months apart. Fornes is tantalizing us. He shows us just how close the answers are by making the hunter and the prey look they could almost touch on the page.

Fornes uses similar elements to create our climax. As Rorschach busts down a door, the page layout goes haywire. We get close-ups of faces and a bunch of thin panels stacked up against each other. It makes the moment look fast and chaotic. But when the violence has passed, Fornes brings us back to a 9-panel grid. One angle, repeated 9 times with characters in various positions. It’s the calm after the storm. It allows the chaos of the previous moment to sink in and allows the reader and characters to survey the damage. 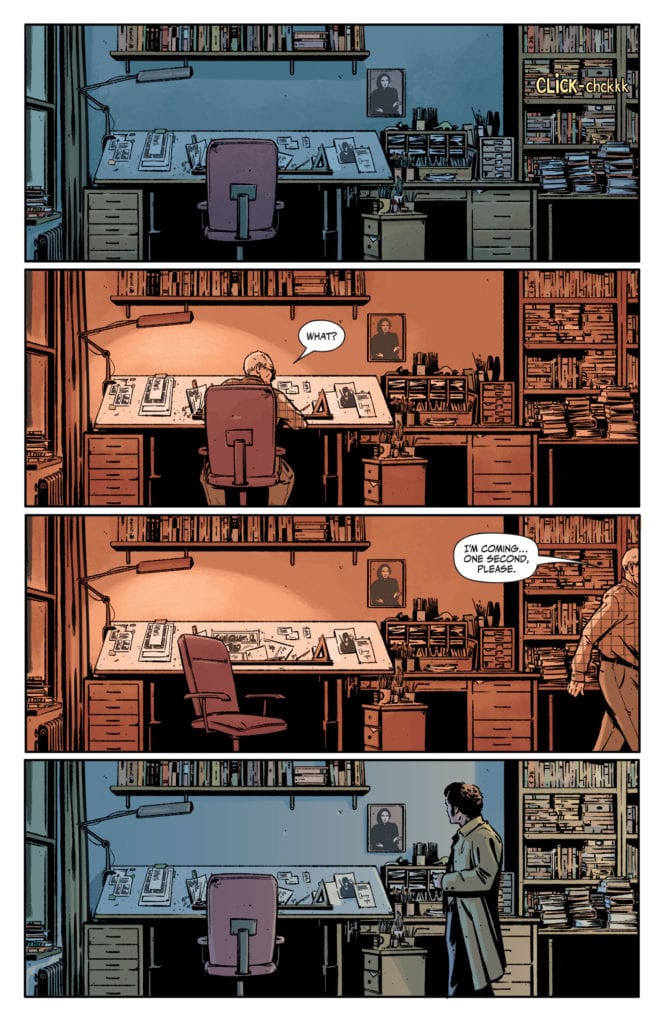 Stewart uses yellows and reds to show Myerson’s transition into Rorschach. When we get a snapshot of Myerson’s earlier life, Stewart gives it a yellow glow. It feels promising, like the golden age of his youth. But as these flashbacks go on, the yellow begins to turn to red. The coolest thing about this is that Stewart uses red to represent many things that seem to feed off one another. The first time we see it is on Myerson’s date gone wrong. Red feels like embarrassment. It’s the blood rushing to his cheeks. But later, as we see Myerson’s brow furrow, the red begins to turn to rage. It’s a rage born out of embarrassment, so in a way, it’s both. By the end of the issue, we see Myerson with a Rorschach mask kicking in a door. His background is solid yellow. It’s as though this is a new golden age he is claiming. But quickly, his background turns solid red, and the anger takes over.

Cowles bookends this issue with the same format of lettering. In the first and last pages of DC Comics’ Rorschach #2, we see the front of Lewis Tower. On both pages, the detective is being given instructions from his dispatcher. The first page is simple. It looks like a column—long, uninterrupted instruction. The detective says nothing in between each paragraph. But on the final page, we see the detective “give his report.” Cowles highlights how little the detective is saying. “Okay,” “Alright,” “Okay.” Cowles places these captions out of line with one another, making them winding instead of a straight column. It gives us the sense that this relationship is deteriorating. It’s no longer the strong column it was. Our detective friend is beginning to have his doubts.

DC Comics’ Rorschach #2  is a slow build. But it feels so normal and true to life. King, Fornes, Stewart, and Cowles feel no pressure to rush their story. This means that things still feel mysterious, even frustrating. But holding back answers is the key to creating a good mystery. This is another brilliantly simple and unassuming issue from this creative team. Pick up Rorschach #2, out from DC Comics on November 17th, at a comic shop near you!

There's not much that happens in RORSCHACH #2. But what does happen is carefully teased out, in what is turning into a brilliant slow-burn neo noir mystery.Review: RORSCHACH #2 is a Slow-Burn Neo Noir Mystery