Review: Rhythm in HELLBOY & THE BPRD: THE SEVEN WIVES CLUB

Written by Mike Mignola, with art and colors by Adam Hughes and letters by Clem Robins, Dark Horse’s Hellboy & The BPRD: The Seven Wives Club is more like a work of music than a comic. Mignola’s script, Hughes’ art, and Robins’ lettering all work harmoniously to create a clear visual rhythm.

Mignola sets the pace of this script brilliantly. As we open, Hellboy and Agent Raskin learn about the story of the Seven Wives Club. This section is very text-heavy. It requires that the reader spend time on these pages, making the reader feel as though these moments are slow and take time. But when Hellboy and Raskin go to investigate, Mignola pulls back. Only what’s absolutely necessary is written on the page. This quickens the pace, but it also makes us feel like we’re being pulled into danger against our will. We want to spend more time on these pages because the danger exists in pages further on. Mignola won’t let us. With our hearts in our throats, Mignola shoves us through each door and down each hallway. His minimalistic dialogue in his spookiest pages makes for a terrifying increase in tension. 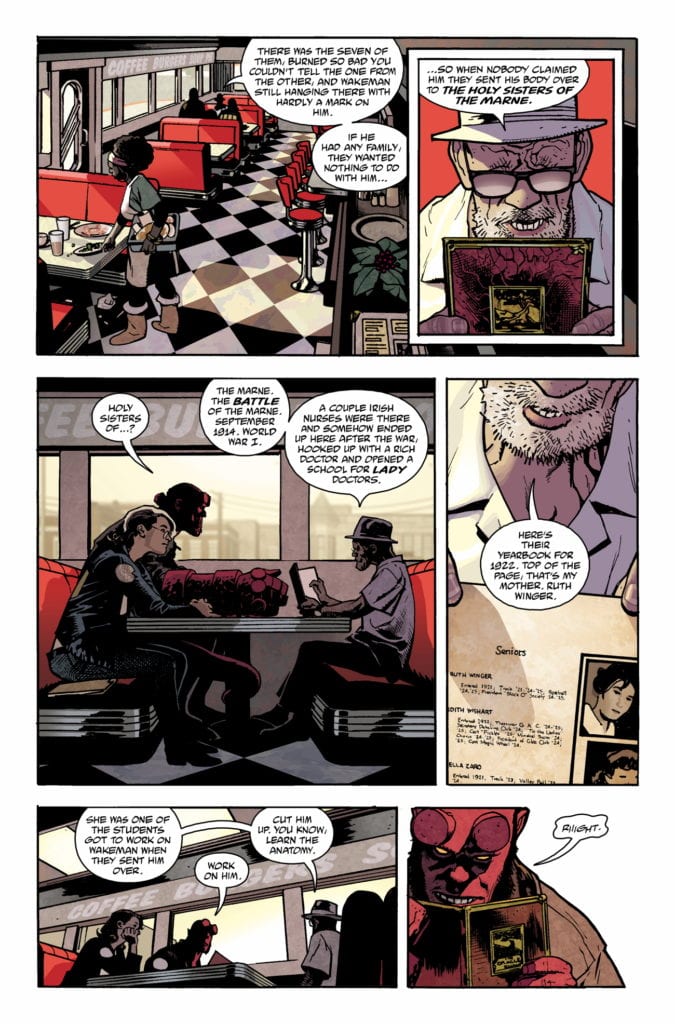 Hughes is joyously experimental with his page layouts. In the first few pages, as we begin to piece together the evidence of what’s happened, Hughes superimposes panels on the rest of the page. They have thick white borders, making them almost look like photographs. As Hellboy collects each hint, the panels begin to look like pictures on an evidence board. But the page doesn’t stay that organized.

When the script comes to its “shit hits the fan” moment, the page layout immediately responds. Panels look like they’re falling off the page, and the world looks like it’s falling apart. Interestingly, in the midst of the chaos, we still get some right angles. Sometimes they’re moments of order being restored, like Raskin beginning to piece together how to stop these ghouls. But at other times, it’s a nightmarish eye of the storm: the villain smiling and stretching out his hands. Either way, these moments are highlighted by their order in the chaos, and their image sticks with you. 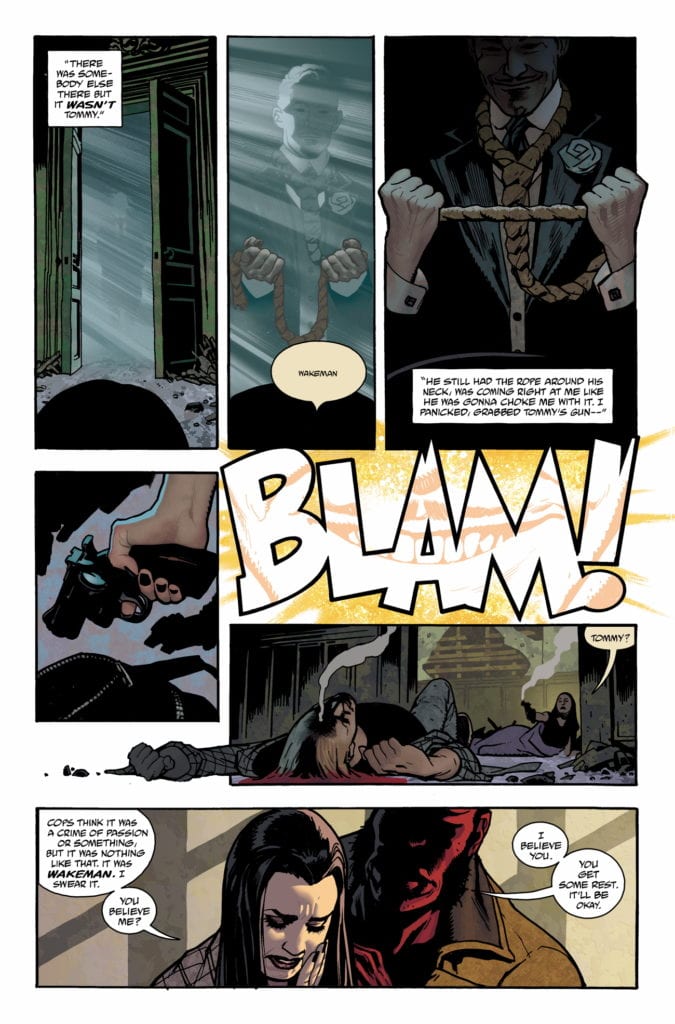 Hughes’ coloring underlines the seductive nature of evil. After all, this is a story about many people who keep seeming to be drawn to the same man. In the opening moments, Hughes colors everything in a very warm palette. Hellboy is a deep red; everything else is almost in an orange glow. It’s autumnal and calming. But when Hellboy and Raskin begin their investigation, everything becomes a little grayer. It’s not just that the lights are off, things begin to look devoid of life. Yet there are moments of brilliant color that show up suddenly in the midst of the grey. They’re not moments of life, though. It’s the ghosts, the skeletons, the power emanating off of corpses. And frankly, it’s all gorgeous. Hughes shows us why all these people, living in a grey world, would be drawn to something bright and fantastic even if it is a corpse.

Robins really leans into the rhythm Mignola has created. In any other script, it would make sense to divide up a character’s dialogue. Large chunks of text aren’t easy to read, and our eyes don’t like seeing them. But in a Hellboy script, Robins knows it’s important that we take our time on these pages. They are the calm before the storm. And so every monologue about what happened to the Seven Wives Club is shown in one long chunk of text. But when Hellboy, Raskin, and Ford enter the school, Robins makes a point of showing how little they say. Their tails to their word balloons are long, and they reach out, with dead space all around them. It makes each line of dialogue feel like it’s cutting through the silence, just as the word balloon cuts through the scene.

Dark Horse’s Hellboy & the BPRD: The Seven Wives Club is another hit from Mignola, Hughes, and Robins, the same team that brought us the brilliant Hellboy: Krampusnacht. It reads like a song. The story’s rhythm is clear as day on the page, and this brilliant creative team balances terror and mystery with ease. Pick up The Seven Wives Club one-shot, out from Dark Horse November 11th! And check out my and Matt Sardo’s interview with Adam Hughes on the project here!

Dark Horse's HELLBOY AND THE BPRD: THE SEVEN WIVES CLUB is another hit from Mignola, Hughes and Robins, the same team that brought us the brilliant Hellboy: Krampusnacht. It reads like a song. The rhythm of the story is clear as day on the page, and this brilliant creative team balances terror and mystery with ease.Review: Rhythm in HELLBOY & THE BPRD: THE SEVEN WIVES CLUB