Interview: Adam Hughes Talks Hellboy And The Elements Of Horror

HELLBOY & THE BPRD THE SEVEN WIVES CLUB written by Mike Mignola hits your local comic book shop this week, but thanks to Dark Horse Comics, Monkeys Fighting Robots got a chance to talk with artist Adam Hughes about the one-shot.

About the issue:
The team behind the Eisner Award-winning one-shot Hellboy: Krampusnacht spins a new ghostly yarn! Hellboy comes to the aid of a young girl whose ghost hunt goes wrong, and a visit to an abandoned medical school reveals sinister layers to a grisly, long-ago murder. Stolen cadavers, vengeful spirits, and more abound in this one-shot.

HELLBOY & THE BPRD THE SEVEN WIVES CLUB Preview
1 of 6

MONKEYS FIGHTING ROBOTS: Adam, thank you for taking the time to talk with us. When I read a well-made horror comic, I get goosebumps, I’m nervous, and I’m scared to turn the page. Are the emotions of an artist different working on a horror book, and if so, why?

ADAM HUGHES: The sad thing is, your average comic can be read in the time it takes to have a healthy bowel movement, depending, of course, on the comic and your fiber intake. You can write a horror comic in such a time that the feelings of terror and dread linger over your process. Drawing a comic takes awhile––or if you’re me, forever––so, by the time you enter the home stretch, all the house lights are up in the Haunted Mansion, and you’re just wearily vacuuming the well-lit floors.

MFR: At a certain point in the issue, “the shit hits the fan.” The page layout immediately responds. Panels look like they’re falling off the page. Yet within the chaos, there are a few moments of structured right angles and straight edges. What made you choose one or the other on those pages?

HUGHES: Hey, somebody noticed! Thank you. I like it when Shit Hits Fans and the comic kind of explodes. Even if the reader doesn’t notice on a conscious level, I hope there’s an unconscious sense of “Waugh! Everything in life has gone wibbly-wobbley!” The structured right angles in the midst of that are my way of showing the readers that an attempt is being made at a restoration of sanity.

MFR: Throughout the issue, many panels almost look like polaroids out of a camera. What lead you to that style?

HUGHES: They do? I was just trying to make creative, immersive environments, and believable characters. I hope Polaroid doesn’t sue.

MFR: Agent Raskin is so defined by her normalcy throughout the issue. When Hellboy looks stone-faced, she’s grimacing. She’s a breath of fresh air in the universe. What went into some of the choices in creating her character, and do you hope she might pop up again someday?

HUGHES: I struggle drawing Hellboy. I just don’t have a comfy ‘lock’ on the character. Pauline Raskin, conversely, was well within my wheelhouse. She’s only appeared a handful of times before, and Mike’s take on her has been so rapturously vague, so I felt I had freedom to make her as I saw fit in my head. When Mike drew her, only twice as far as I can tell, she’s just a Mignola shape in a B.P.R.D. windbreaker with glasses and brown hair that ends in a swoop. That’s it. So, I created my own look and backstory for Pauline, much as an actor might do for a part they are playing. None of it shows up in the final production, and it might be COMPLETELY wrong in the eyes of the creator of the thing, but it helped me pass the hours.

In my world, Pauline is a third-generation Texas lawperson. Her grampa was a Texas Ranger, and her dad was a US Marshall. She disappointed her dad by not going into traditional law enforcement but rather the supernatural crime-busters of the B.P.R.D. Her grampa is okay with this because he encountered, as a Texas Ranger, something scary once in his career, and he GETS IT. Pauline’s gun? I didn’t make it an efficient semi-automatic pistol; it’s an old-school revolver, her grampa’s gun that he gave her when she joined the B.P.R.D. She is, in my hands, a lanky Texas lawperson with bootcut jeans and a no-nonsense laconic style. A female Clint Eastwood with a library card. I could be totally wrong, she’s Mike’s character, but that’s what I was thinking when I drew her. I assumed there has to be a reason why Hellboy feels cool being partnered with her; he must know she can handle herself and can do her job.

MFR: The page below taunts me so much! You literally have to put your finger on the “KEEP OUT” sign to turn the page. Can talk about how this page builds tension and what techniques you used?

HUGHES: Uh, yeah. Yeah! I planned that! I’m the Stanley Kubrick of comics, I know what I’m doing at every turn!

I have NO idea what you’re talking about. Is it the page where the three of them are getting out of the car in front of the old nursing school? I just wanted a sense of “SPOOKY.” I knew that once they get into The Room at the End of the Story, the rest of the tale unfolds in this one dark little chamber of horrors. So, I figured that all panels before that were my only chances at setting a sense of mood and spooky dread. I wanted to make the abandoned school look monolithic and supernaturally off-limits, like the Marsten House in SALEM’S LOT.

Look, I’m like MAYBE sixteen IQ points above a savant. I just go with my instinct as to what feels right in any given creative situation, and then trust to an unearned sense of erudition afterward to make it look like I knew what was doing. None of the Beatles could read or write sheet music, but they ended up making some pretty timeless songs. Never underestimate us undereducated fools with loud guts that we listen to. 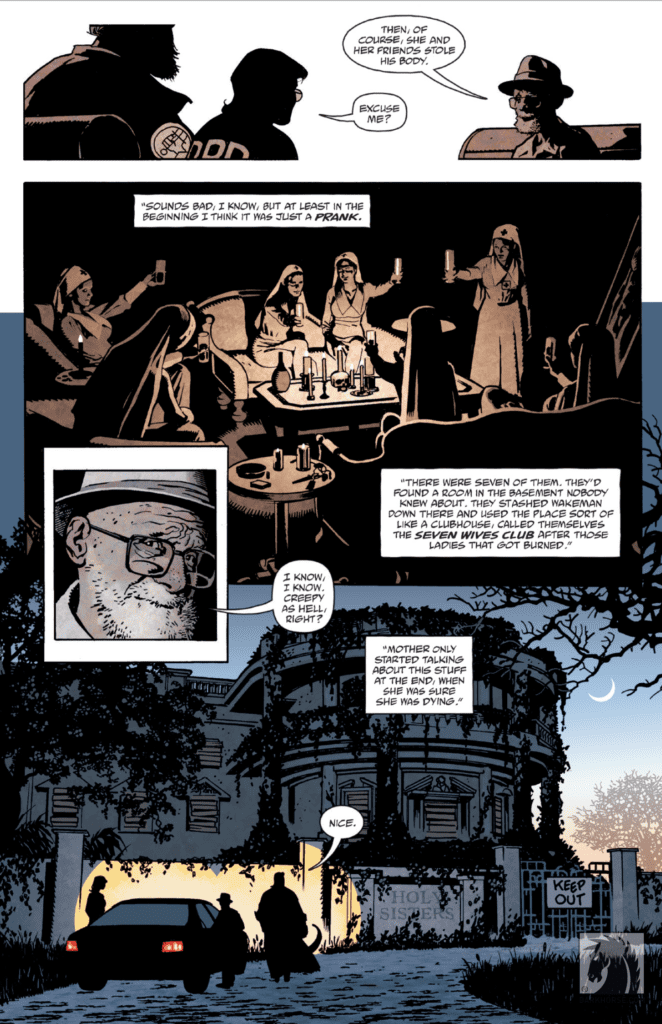 MFR: Thank you again, and best of luck with HELLBOY & THE BPRD THE SEVEN WIVES CLUB!

Who is your favorite Hellboy artist besides Mike Mignola? Comment below with your thoughts.