When you’re facing trouble, it’s often vital to put your trust in other people. In Red Sonja #8, out this week from Dynamite Entertainment, the titular warrior decides to do just that.

The Hykanians venture to meet with the woodland tribes, and Sonja puts he her trust in their leader, Lord Oak. One of Dragan’s agents is at work to disrupt that arrangement, though, and divide their budding alliance. 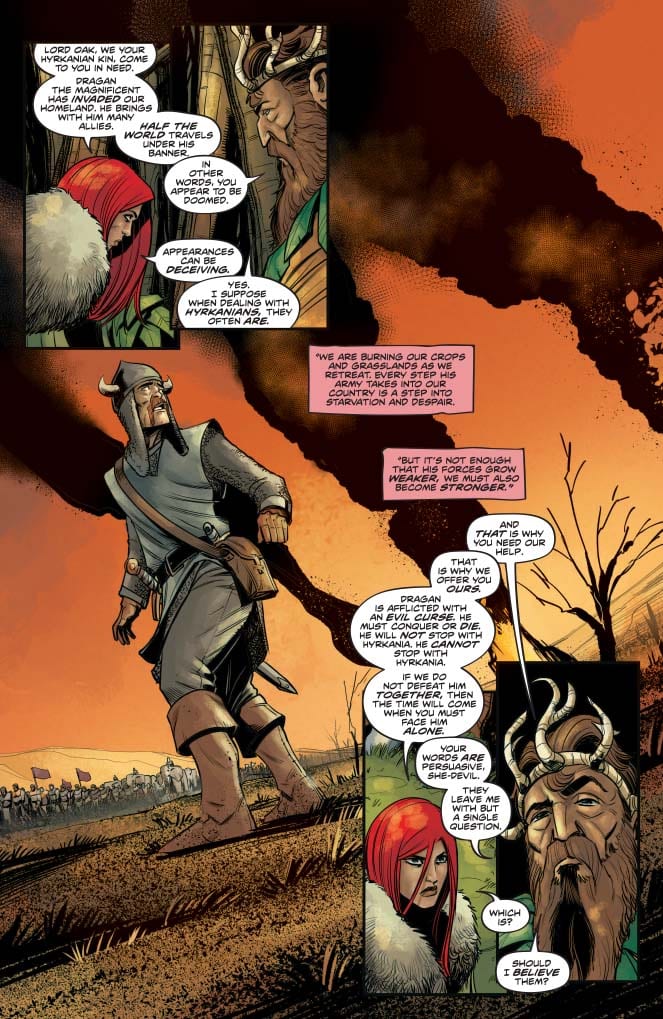 Mark Russell focuses away from the action in Red Sonja #8, turning instead toward more political drama. The writing doesn’t quite reach the heights of our last few issues. However, it’s still a strong showing on Russell’s part.

The book serves the larger narrative well, advancing the story as the Hyrkanians begin to run out of options and grow desperate. And, while not quite as sharply-focused as in previous chapters, Red Sonja #8 carries thematic weight.

Sonja and Lord Oak spend the book’s first half engaged in on-the-fly politicking. The two understand the gravity of the situation in which they find themselves. They both know that a unified front is their best chance of defeating the Zamorans. Whether or not they can rely on one another, though, is the calculation they struggle to make.

Lord Oak is said throughout the book to be, above all else, an honorable ruler. However, a segment of his people are hungry for revenge after the death of Vorgon, his own kin, in an earlier issue. Virtues like honor can fail, especially when confronted with temptations like greed or revenge. The result can often be tragedy and destruction, both for the object and the target. On one hand, this could be read as a cynical, even misanthropic theme; however, Russell doesn’t present it as such.

In Red Sonja #8, Sonja and Lord Oak’s instincts are to trust one another, even despite some reservations. They recognize they face a common threat, and are prepared to cooperate for the sake of survival. What threatens to undermine that trust is not their own animosity, but the machinations of a bad actor who manipulates and turns them against one another. He works to play one faction within the woodland tribes into destroying the truce. In doing so, they risk bringing disaster on their own people. 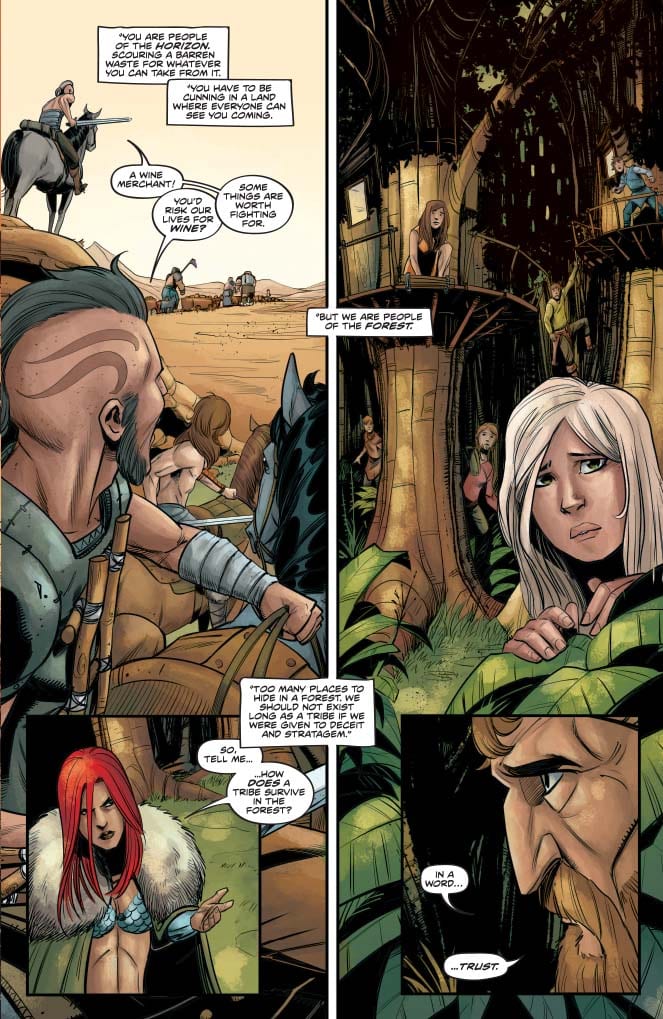 Bob Q’s artwork is as impressive as ever in Red Sonja #8.

One of the standout elements is the manner in which he lays out the panels, especially in the book’s first half. There’s a meticulous sense of symmetry to the pages as Sonja and Lord Oak speak, spotlighting the delicate and fragile balance of their budding alliance. On one page, for instance, we see the two facing off in juxtaposed panels in the top-left corner. The artist then mirrors the image in the bottom-right corner, laying out the page like a playing card. There’s a lot of continuity of motion in these pages, suggesting careful thought and planning went into the work.

The character designs feel a bit more utilitarian in Red Sonja #8 than in previous issues. That said, their expressiveness remains one of the strengths of Q’s work on the book. The figures are dynamic and carry a lot of momentum throughout this chapter.

Red Sonja #8 comes off the highpoint set in our last issue, continuing the strong direction of the series. If you’re not already reading this every month, get on it.

Review: Trust & Revenge are Powerful Pulls in RED SONJA #8While it doesn't quite reach the masterful highs of our last issue, RED SONJA #8 is a strong showing in both storytelling and artwork. If you’re not already reading this every month, get on it now.