It all comes down to this. With Red Sonja #12, out this week from Dynamite Entertainment, we have the final showdown between Sonja’s rag-tag band and the full might of the Zamoran Empire.

Can the barbarian queen and her forces pull it off? Dragan has the numbers and the resources, but Sonja still holds the only bridge across the Vilayet Sea. Plus, she has more cards up her sleeve than she lets on. 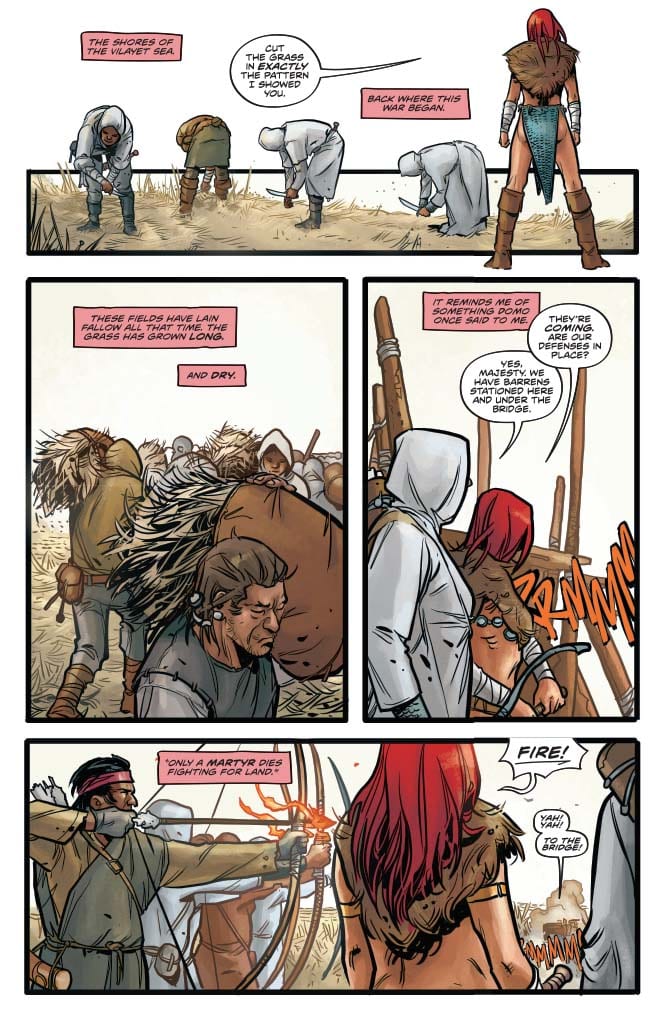 Mark Russell’s writing in Red Sonja #12 is tense and fast-paced. We’re locked in minute-by-minute, watching the climactic battle unfold. We don’t know how Sonja and her Hyrkanian forces can win, but she seems to have one trick after another she can use to harry Dragan and strike where her enemy is vulnerable.

We can chalk how Sonja’s plans unfold up to a combination of tactical brilliance and sheer luck in timing. As a result, a Hyrkanian victory still feels plausible, even despite the overwhelming odds. The storytelling is tight, but doesn’t stretch the belief of the reader, which is a very fine line to walk.

Scattered throughout the book are flashbacks to Sonja playing a game against her old mentor, Domo. Russell used this framing device throughout his run as a means to make a direct address to the reader about the broader themes of his work on the series. Here, we see the writer expound on the nature of war and violence: cyclic, and ultimately futile. However, we also see Sonja manage to triumph against her master, not through overwhelming force, but through cunning and compassion, which adds layers of profundity to the work.

Red Sonja #12 manages to feel climactic, epic, and satisfying as the conclusion to this story. Truth be told, the writer’s run on the character has been so well-constructed from a narrative standpoint, this could even work as a standalone, 12-issue maxiseries. Despite the tight storytelling and conclusion, Russell manages to setup several conflicts that will come with the next story arc. It’s a fully-formed finale, yet with a hook to bring readers back for issue #13. 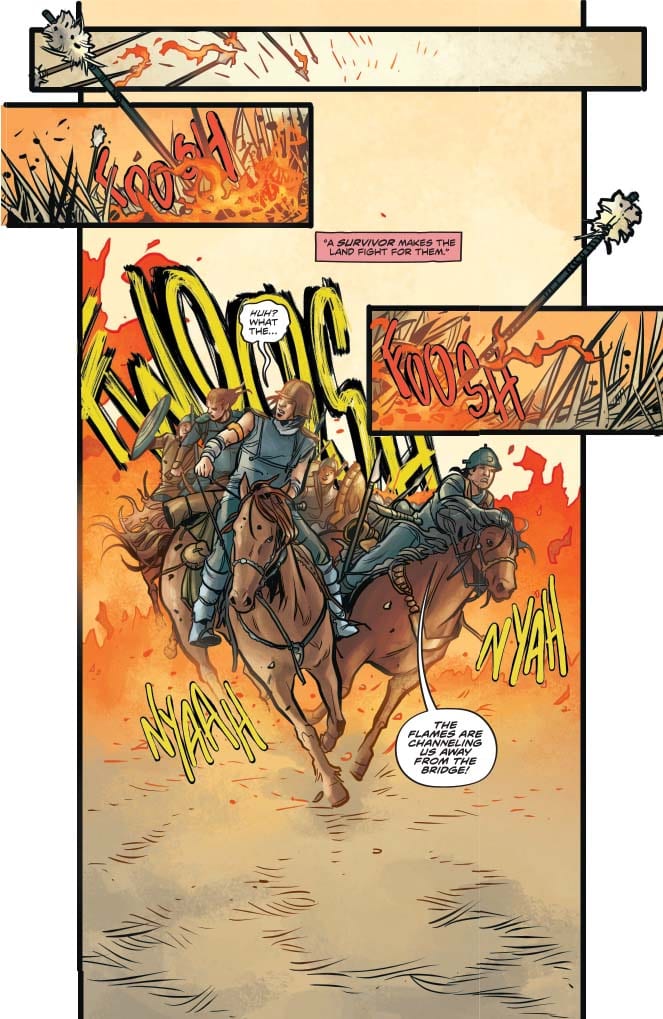 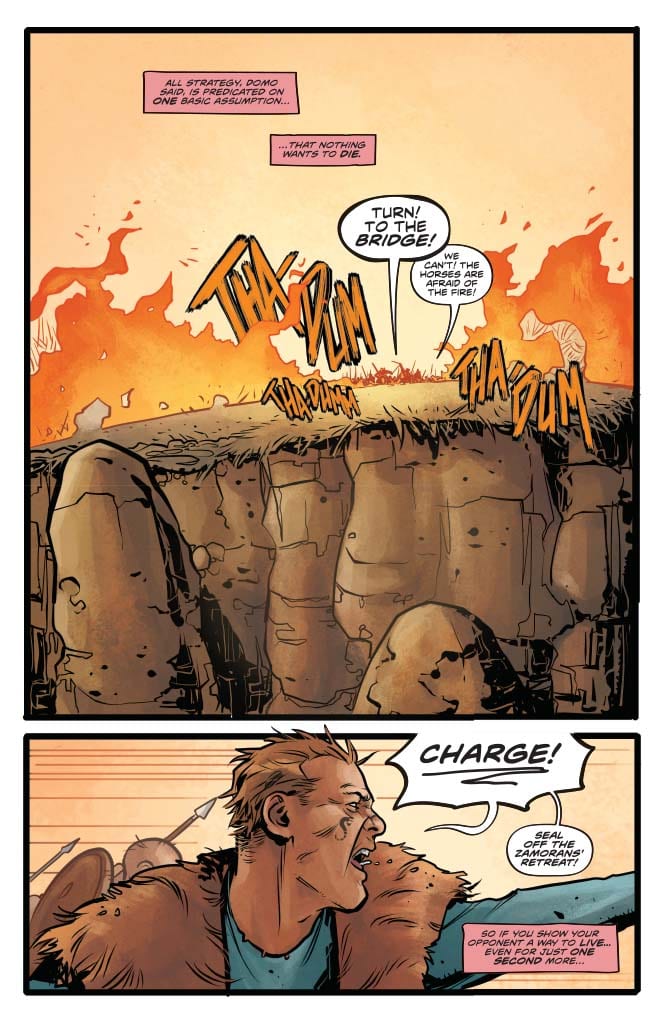 I’ve had some gripes regarding Mirko Colak’s style from time to time during his run on the series. Few of those critiques hold up with Red Sonja #12, though.

Colak’s artwork is well-suited to Russell’s writing. The grime and grit of war is palpable throughout the book. In addition, we have some marvelously kinetic action sequences brought to life with lively, dynamic illustrations. In earlier issues, I commented that the artist’s figures sometimes felt rather static and lifeless; here, though, the characters practically leap off the page at points.

The visuals are not always the most clear and distinctive in Red Sonja #12. This has been another recurring complaint about Colak’s style throughout the run. In this chapter, though, it feels less like an artistic oversight, and more a product of the chaotic battle scenes on the page. While not perfect, the composition of individual panels is solid.

Red Sonja #12 is a very…well…red book. Irony red tones, courtesy of colorist Dearbhla Kelly, dominate the pages of this issue. The palette works well as a backdrop to the fighting. Plus, by employing a significant amount of blue-green to compliment the reds, there is plenty of contrast going on. 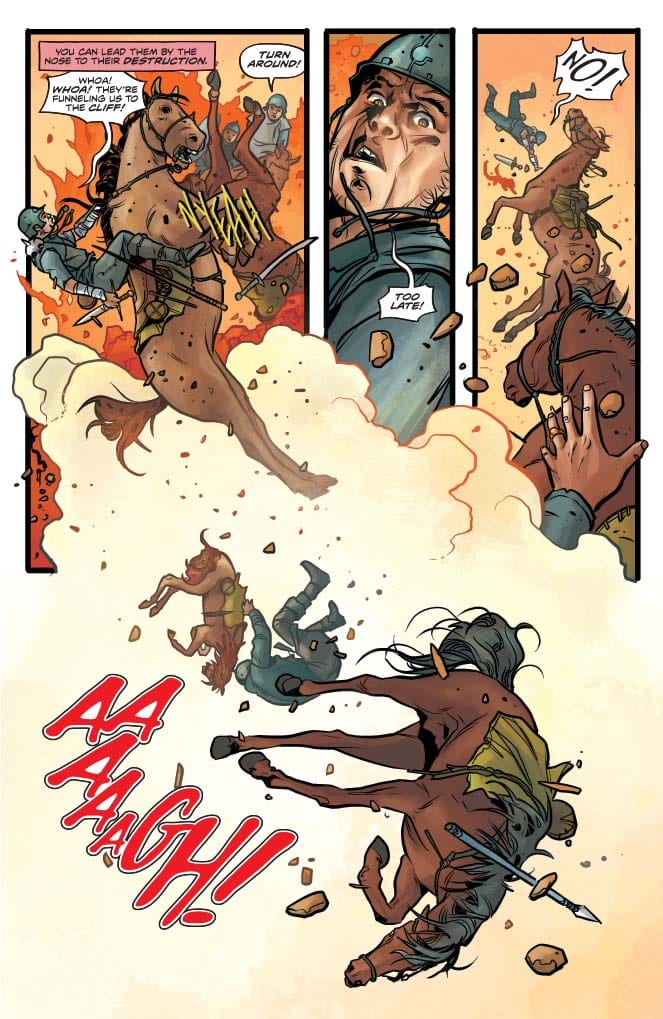 Red Sonja #12 is a masterfully-crafted conclusion to what may be one of the best stories in the history of the character. Go out and buy every issue of this run NOW.

Fans of this series couldn’t have wished for a better conclusion to this arc than RED SONJA #12. Mark Russell outdoes himself with well-paced, tight storytelling, giving us a compelling and satisfying conclusion. Do not miss this.Review: The Final Battle Rages in RED SONJA #12