Most of her people have abandoned her. Many of her closest advisors betrayed her. Things seem bleak for our heroine in Red Sonja #10, out this week from Dynamite Entertainment.

Of course, appearances can be deceiving…if you know how to leverage your situation, and fortunately, Sonja may have a plan. Beyond that, she may find additional help from an unexpected source close to Dragan himself. 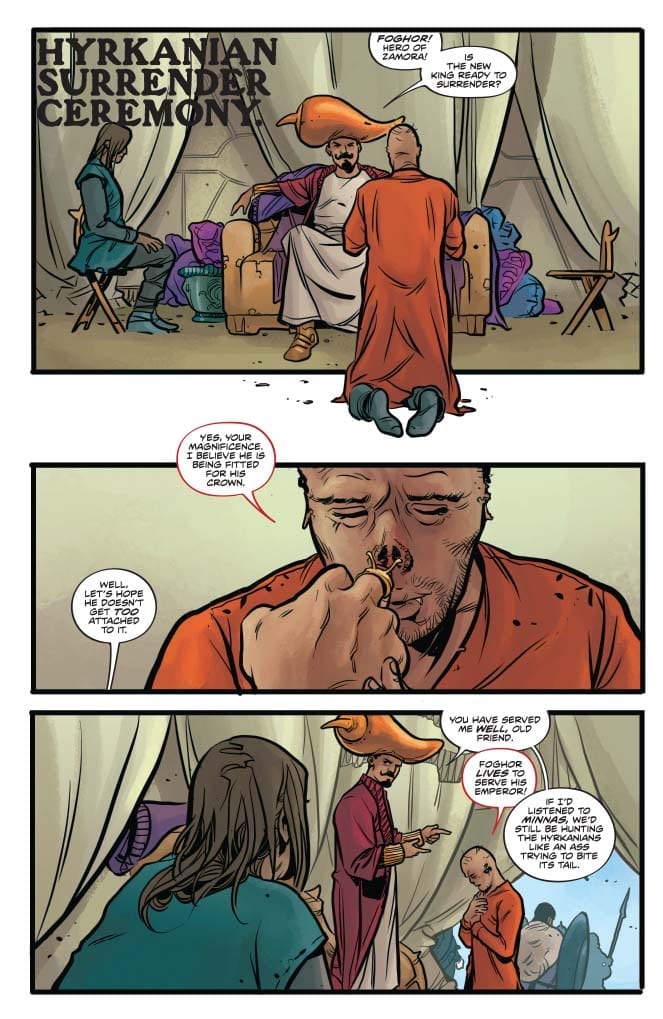 The majority of Red Sonja #10 is focused away from the titular character. Instead, we first have a flashback-within-a-flashback, showcasing more of Domo’s tactical wisdom, which he imparts to Sonja. After this, another flashback gives us insight on Minnas’s backstory, and how he came to serve Dragan.

One of the best elements writer Mark Russell brings to the series is the way he weaves themes and motifs into the story. There are multiple narrative threads in play in this single issue. However, Russell manages to tie them together by the book’s end. It’s almost poetic how well these seemingly-disparate narratives converge, giving the work a mature, well-constructed feel.

In Red Sonja #10 for instance, we see Minnas practicing divination in the past to determine how best to manage Dragan’s growing influence. But, while his medium can accurately see the future, it’s responses can be cryptic and tend toward misinterpretation. It’s a kind of monkey’s paw scenario that proves to be his downfall…but may also be key to his revenge. This, in turn, relates directly to Domo’s lesson from earlier in the book: “hubris is suicide.”

The only real complaint is that there are parts of the extended flashback which overlap with the present. It effectively showcases the dramatic irony of the situation, as we understand the fallacy of taking the theraphim’s advice literally. However, it can be a bit confusing on a first read through, as it makes it a little difficult to keep straight whether the dialogue is meant to be read as in the present, or in the past.

Beyond those minor gripes about craft, though, Red Sonja #10 is another excellent chapter in Russell’s story. 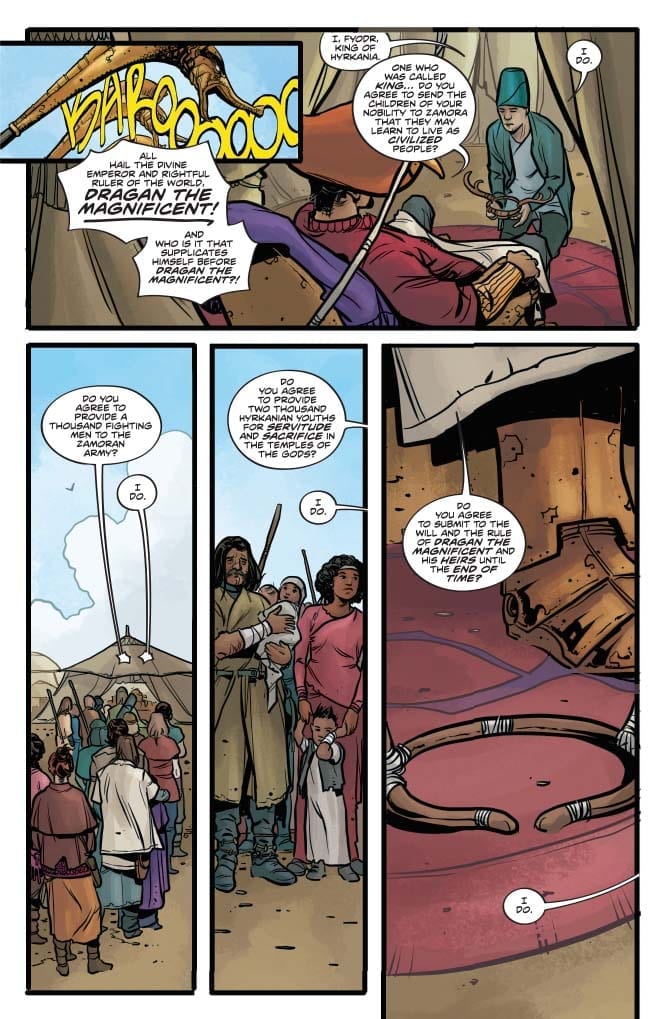 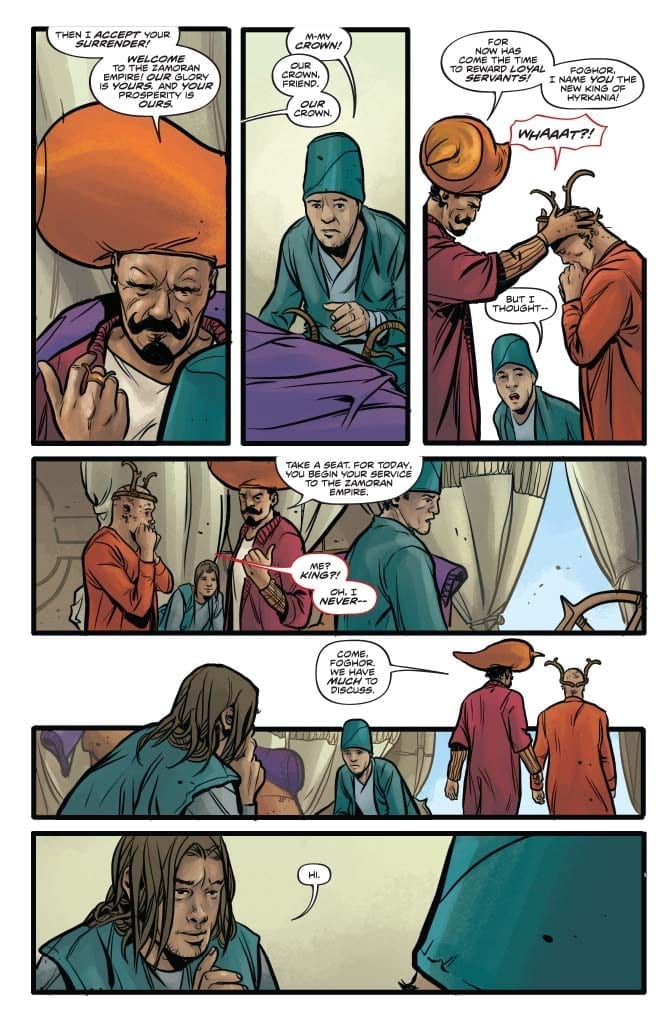 Artist Mirko Colak is takes over visual duties once again for Red Sonja #10. As with previous issues, Colak’s work flows well from panel to panel. One picks up on a sense of cohesion throughout which keeps the reader vested in the story.

The visuals are not exceptionally detailed or expressive, though. Characters’ faces, for instance, tend to remain stony and closed-lipped throughout the book. They only really feel especially lively when conveying over-the-top emotion. Otherwise, they’re largely inscrutable.

If we compare Colak’s work in Red Sonja #10 to that of artist Bob Q in our previous issue, there is a clear gap in the level of detail conveyed in the artwork. The backgrounds are fairly sparse and limited, while character designs feel a bit sketchier. This could be chalked up to a stylistic preference, but for my money, it feels somewhat unfinished. 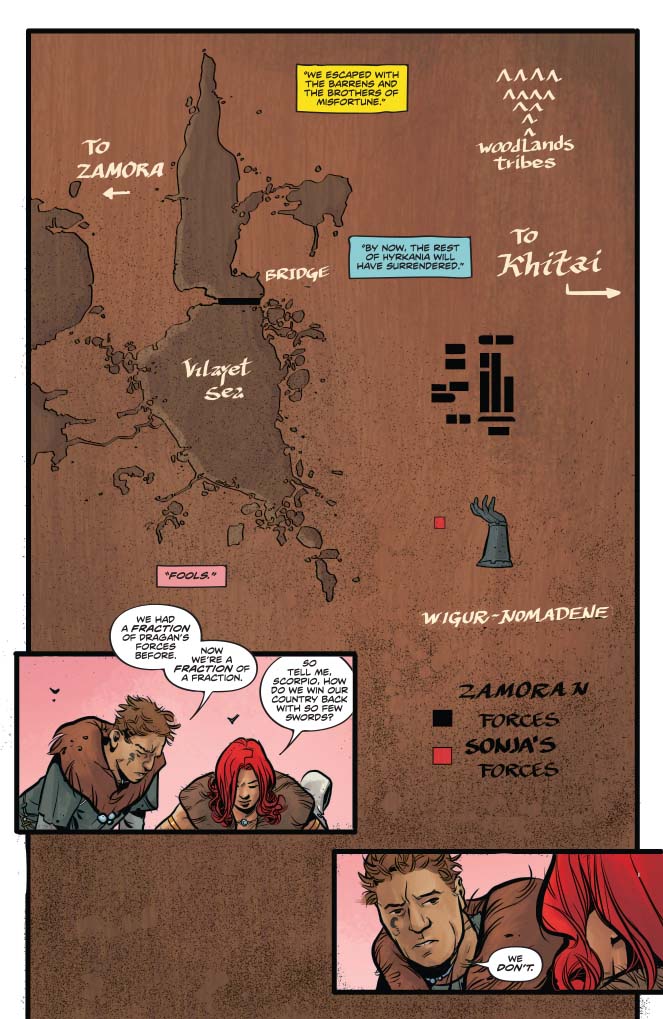 Red Sonja #10 offers a rich, interwoven story that deepens the narrative and fleshes out a couple of characters about whom we knew relatively little. It’s worth picking up.

Review: Rabbits, Sheep & Talking Severed Heads in RED SONJA #10While the art falls a little flat, RED SONJA #10 offers a rich set of narratives sure to keep readers invested in what will happen next. Another solid chapter in Russell's fantastic run on the series.