Writer Stephaine Phillips (The Butcher of Paris) and artist Robert Carey (Power Rangers), in collaboration with story creator Janosh Neumann, bring readers the first issue of political-espionage thriller “Red Atlantis.” With colors from Rosh and letters by Troy Peteri, this opening chapter offers an engaging and unexpected opening sequence with solid art, but never does enough to separate itself from its genre contemporaries.

“A series of unexplained, violent crimes on Election Day around the U.S. leads the FBI to zero in on a covert group of Russian terrorists. When a Texas journalism student named Miriam accidentally finds herself mixed up in the investigation, her life will never be the same. With political espionage, treason and even mind control, can she clear her name and stop the U.S. from entering into a new Cold War?” 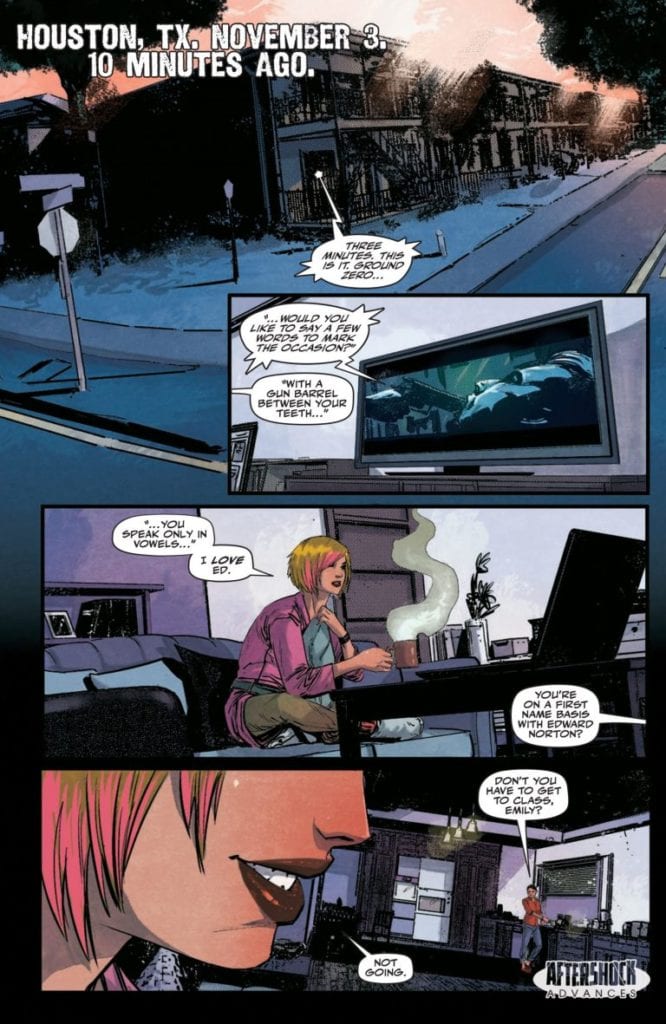 Writer Stephanie Phillips takes the story and concept created by Janosh Neumann and puts together a script for “Red Atlantis” #1 that is sharp, entertaining, and expertly paced. The jarring and prutal opening events immediately pique the reader’s interest with the desire to know what the hell just happened. This opening comic feels like it carries a ton of momentum through each page, and part of this has to do with how natural all the character introductions and their dialogue feels. From the detectives to the local cops and to the average people caught in the middle of this story’s strange tragedy, this really does feel like a procedural/ political thriller. This is where I noticed this comic’s problem, however. I realized after reading this issue, and then re-reading it, that I didn’t really care much about the characters or the larger plot. This comic feels good to read because it’s competently written, but every element in it feels like something that has been done dozens of times over by now. It’s not that the script necessarily has tons of forward momentum, rather that the plot is like a ball on a downward hill. The script is so competently put together that it is almost naturally entertaining in a sort of predictably bland way. It reminds me of a network precedural drama – completely entertaining, but utterly forgettable. This may be just a first issue problem where the characters and plot will become more realized as the story continues, but as it is this is again a well-written but derivative attempt at a modern political thriller. 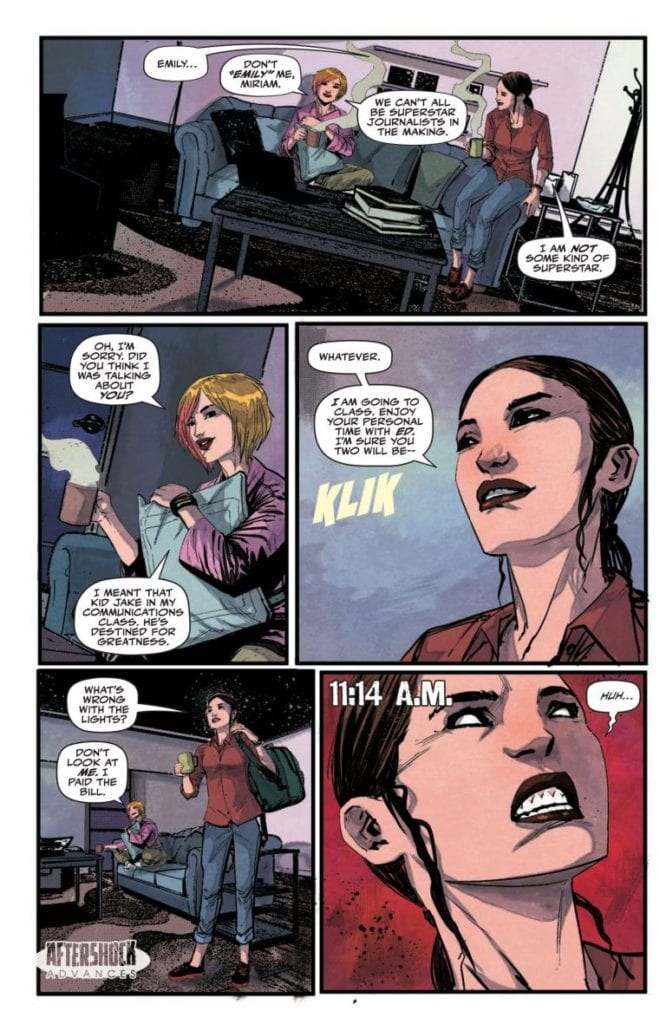 The visuals in “Red Atlantis” #1 are realized by artist Robert Carey, who uses a careful eye for character detail and excellent directing to create a solid comic in terms of artwork. Every one of Carey’s characters have their own distinct body language and facial animations, with an outstanding amount of detail. There are flaws and imperfections in every person’s face that make them seem fully realized as human beings. Carey’s random detail-work is also extremely impressive. There’s a panel where Carey draws a person holding a handkerchief, and you can actually see the person’s finger outlined under the cloth. That’s a tiny minor detail that isn’t very common in comics. The visual direction is a large reason why the comic’s pacing feels so solid, as Carey keeps the panel flow and character focus feeling very natural. It’s nothing that hasn’t been done in thousands of other comics, but it’s still very competent. The colors from Rosh are really outstanding here, offering nuanced color gradients and smoky effects on every panel. Rosh’s work gives every page a kind of dimension that works hand in hand with Carey’s detailed pencils to craft a very high-quality visual experience. The lettering from Troy Peteri (who also lettered Phillips’s The Butcher of Paris) is smooth and modern, using an innocuous and clean font that effectively conveys the dialogue and narrative while sort of just staying out of the way. Overall the visuals of this comic make the experience worth picking up a copy on their own. 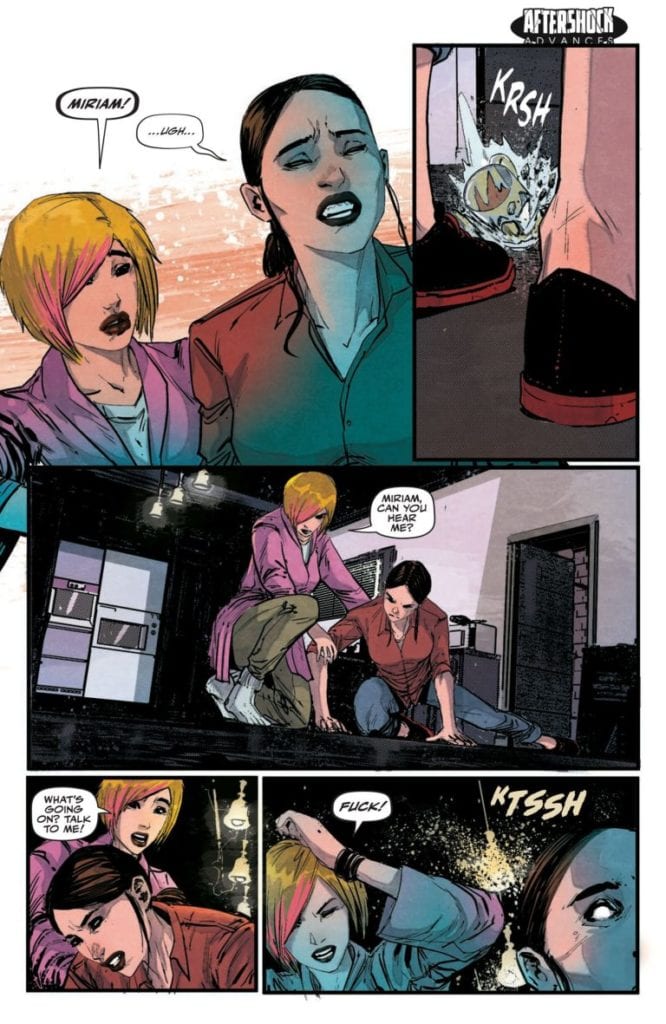 “Red Atlantis” #1 is an entertaining and very competently made comic that fails to make itself stand out in the genre of political conspiracy thrillers. The script is full of solid dialogue and intrigue premises, but it suffers in terms of making the audience care about anything going on. The visual work is honestly stellar however, and makes this opening chapter worth the price of admission on its own. If this sort of procedural conspiracy thriller is your idea of a good time, then grab a copy from your local comic shop today!

An opening chapter of murderous political intrigue that offers an intriguing start, but doesn't do much to separate itself from the rest of the genre.Review: RED ATLANTIS #1: Full-Contact Voting