Review: The Unending Terror of Occupation in THE BUTCHER OF PARIS #1

The realistic examination of factual events in world history is something that the comic medium doesn’t explore too often. World War II is an area of time that is typically spun in favor of some fictional character or event, as can be seen in everything from Captain America to the Hellboy Universe. So when such an interesting and understated event like the serial murders in Nazi-occupied Paris is given a treatment by a writer through an American publisher, it’s worth taking note of. It’s a relief too then that Stephanie Phillips’ debut issue of “The Butcher of Paris” is an engrossing and dread-inducing start to a series that will expose one of the most harrowing incidents during an already horribly troubled time in European history.

In Nazi-Occupied Paris in 1944, the brutality of the Third Reich’s reign is not the only terror Parisians have to fear. A serial killer has been stalking and murdering civilians by the dozens and using the situation in Paris as a cover. Now with the authorities alerted, it becomes a race against time – and the Nazi oppressors – to stop this relentless horror before more bodies can pile up. 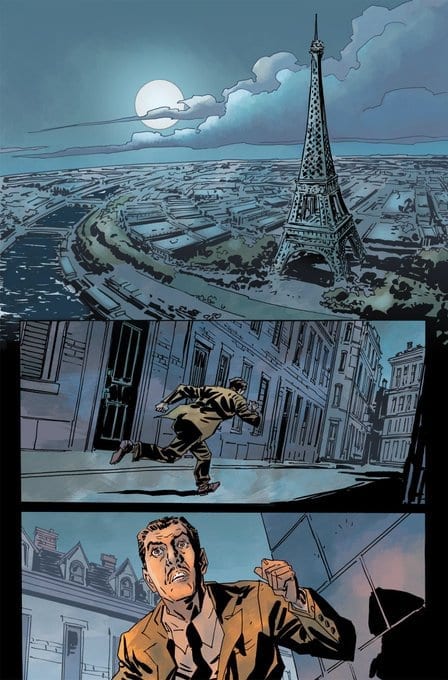 Despite the fact that the synopsis of “The Butcher of Paris” is given upon opening the first issue, writer Stephanie Phillips still takes her time in presenting the horror of the murders themselves. In the meantime she stresses the turmoil the people, especially Jewish people lived under while being ruled by Hitler’s forces. It would be easy to focus on the serial killings almost solely and therefore make the Nazi occupation element lose the element of stress and terror that such an experience needs. Fortunately, this is given the proper attention it deserves. This is a thoroughly dread-inducing issue, with civilians doing anything they can to escape or at least stay alive under Nazi occupation – and this is before the murders are discovered. The characters in the book are well defined by their positions and their struggles, with each main character having an important part to play in the coming story. Interestingly, Phillips chooses to have the killer exposed near the beginning. The reader meets him only a few pages into this debut issue. This further helps instill the sense of dread via dramatic irony; the audience knows who the killer is, but the character do not. A brilliantly written start all around. 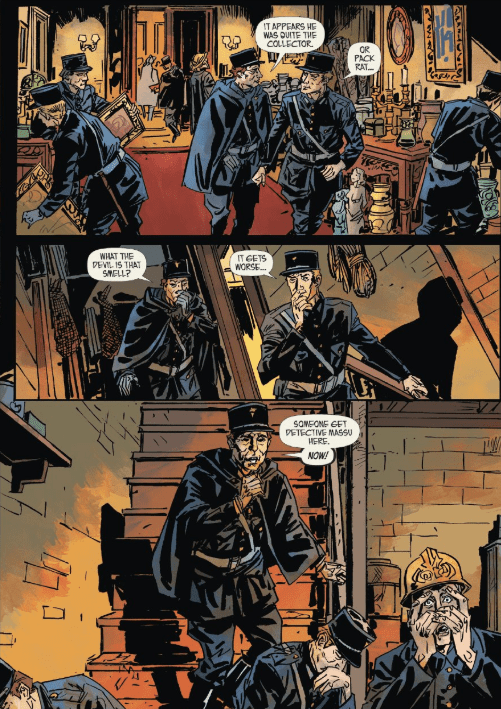 The art provided by Dean Kotz‘s pencils and Jason Wordie’s coloring is excellently in tune with the story here. The visual style very much lines up with the semi-realistic and shadow-laden aesthetic provided in many of Dark Horse’s horror comics. The thick lines and heavy inks Kotz uses create the oppressive mood the story needs for its chaotic plot. His detailing of character’s differing facial features and expressions makes each person easy to recognize, which is difficult in a story that uses so many supporting characters. The environmental detail of 1940’s Paris is remarkable as well, from the stone buildings to the dress of civilians and S.S. troopers alike. Wordie’s colors fill the pages with a murky depth in tandem with Kotz’s inks. The panels all seem as though they are lit by either moonlight or gas lanterns, and it works wonders in establishing the tone of the story. The quietly effective work needed for a comic such as “Butcher of Paris” can often go unnoticed in favor of more “explosive” works, but this issue shows just how much this sort of art is needed for storytelling.

The lettering from Troy Peteri is also an interesting choice, as the font favors a slightly more erratic style over more standard comic fonts. It doesn’t look unlike title cards for horror film from this era, and it adds a sort of frantic urgency to much of the dialogue. The bold lines are also subtle but noticeable, and it adds more of the horror undertones to the reading experience overall.

“The Butcher of Paris” #1 is a wonderfully suspenseful first issue, fraught with tension building dramatic irony and historical terror. Possibly the most ingenious element in this comic is that despite its premise about a historical serial killer, Phillips never loses sight of the horror that came to the people of Paris under the boot of the Third Reich itself. Fantastic tension building and character drama fuses with phenomenal art to create one of the most stellar debut issues a series could ask for. Be sure to pick it up from your local comic shop on 12-4.

"The Butcher of Paris" #1 is a tense and well-orchestrated start to a promising historical-horror series.Review: The Unending Terror of Occupation in THE BUTCHER OF PARIS #1