What seemed like a simple missing person’s case develops into a much deeper, more arcane mystery in Read Only Memories #2, out this week from IDW Comics.

As Lexi investigates John’s disappearance, she finds herself drawn further into the Santa Cruz underworld than she anticipated. The mystery brings her into conflict with gangs and cultists, ultimately pulling her back home to the streets of Neo-San Francisco. 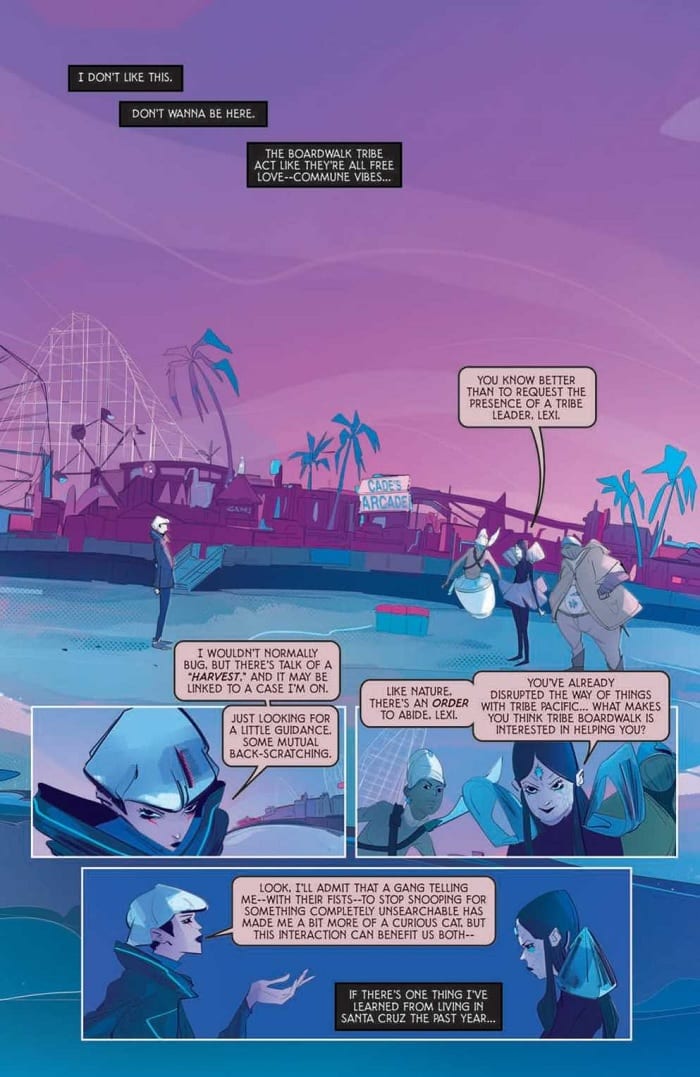 Like our previous issue, Read-Only Memories #2 leans gleefully into the tropes of the cyberpunk genre. That said, it digs deeply into the noir aesthetics and hard-boiled detective stories that inspired the genre’s originators. So, while it reads like a star-eyed love letter to Blade Runner, the book feels more like a contemporary of the genre mainstays. It feels like an original product, rather than a pale imitation as genre revivals often turn out to be.

At its core, the book delivers some fine storytelling. Tension build as Lexi uncovers information about The Harvest, and makes plans to crash it. The primary tension in the issue’s first half rest in the question: what the hell is The Harvest?! We get some answers by the book’s end, but each new reveal only yields more mysteries.

Read-Only Memories #2 takes most of the elements that worked in the first issue and accentuates them. We don’t get to explore as much of the world of the story as before. However, the shift away from worldbuilding ultimately allows for a richer narrative.

Part of the book’s strength lies in its characterization. Writer Sina Grace develops the relationship between Hedy and Lexi, helping shape both into more complex and interesting figures. At the same time, the writer further fleshes out the story and setting. Grace dishes out information tactfully as it becomes relevant, avoiding the dreaded infodump that can poison lesser works.

From a writing standpoint, Read-Only Memories #2 is a master class in how to embrace a genre with defined, well-treaded tropes and do something original with it. From what we’ve seen thus far, it may be one of the most compelling cyberpunk stories we’ve seen in the last decade, at least. 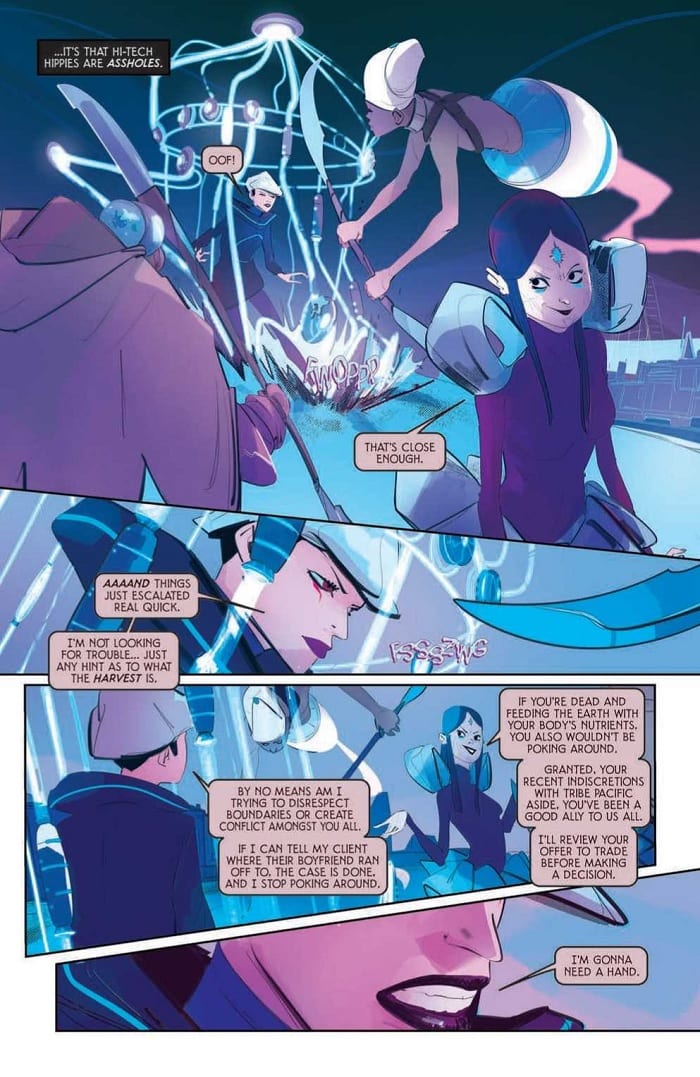 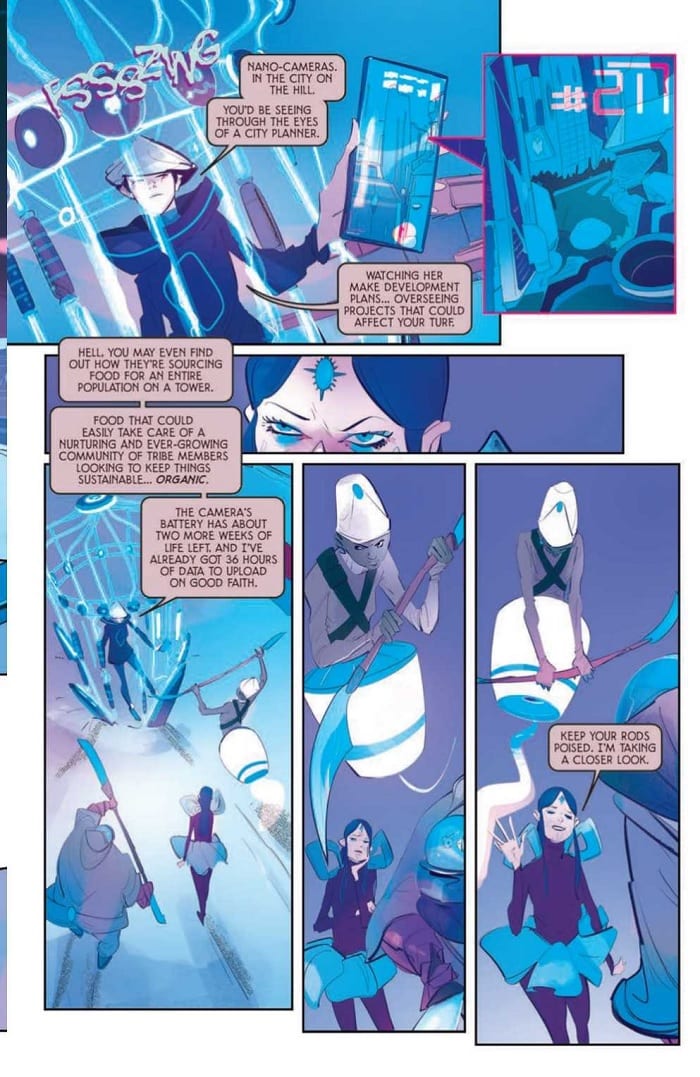 Not wanting to be overshadowed, artist Stefano Simeone provides impressive visuals for the book. The artwork does a fantastic job of capturing the tension in Grace’s storytelling. Simeone hits the story beats perfectly, delivering images that consistently match the dialogue in emotional pitch and dynamism.

The setting of the book’s second half somewhat limits Simeone in terms of inventiveness and flair. However, he doesn’t pass up any opportunity to deliver more of those stylized, blue-and-pink-bathed urban landscapes we saw in our first issue. With Read-Only Memories #2, the creators show a commitment to make the aesthetics serve the story, rather than vise-versa.

The artwork possesses a solid noir vibe to compliment the engaging writing. Even when we’re in a setting that wouldn’t normally work with this kind of story, the artist knows how to leverage dynamic motion and preserve a sense of continuity to heighten the tension.

The colors in the book’s second half have a similar effect. While muted compared to what we’ve seen thus far, pops of color provide enough contrast to keep the visuals interesting. 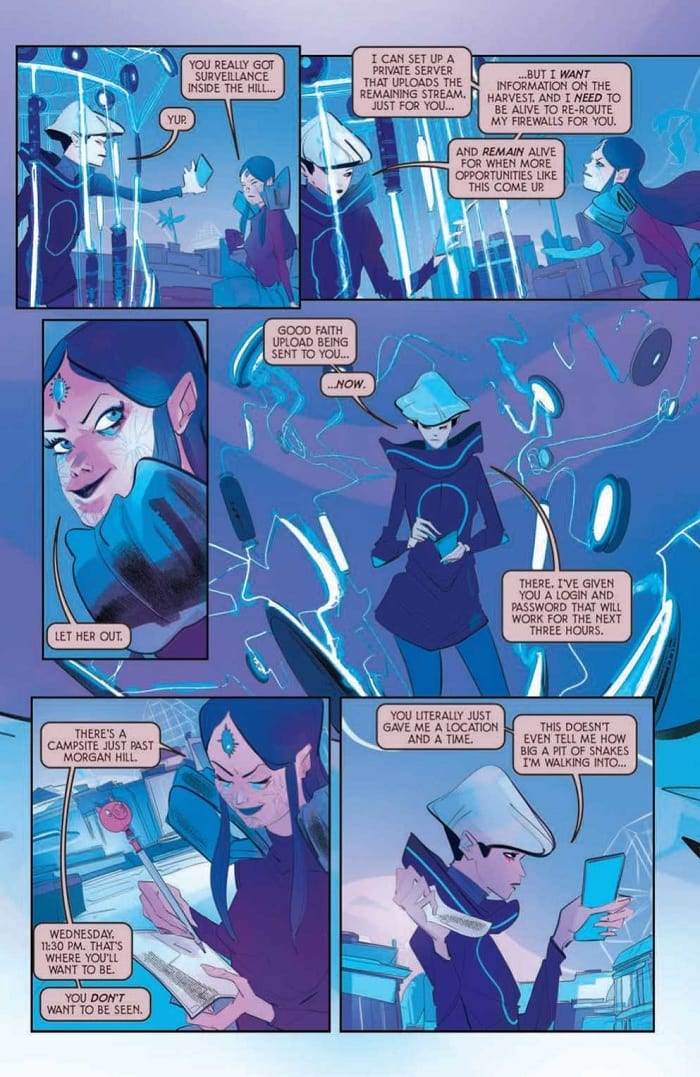 Read-Only Memories #2 is a fantastic second chapter. It takes us to the midpoint of the story, introduces new elements, and draws the reader deeper into the mystery. Definitely worth picking up this Wednesday.

Review: It's Harvest Time in READ ONLY MEMORIES #2READ ONLY MEMORIES #2 is a fantastic second chapter. It takes us to the midpoint of the story, introduces new elements, and draws the reader deeper into the mystery. Definitely worth picking up this Wednesday.