From writer G. Willow Wilson (Ms. Marvel, Invisible Kingdom) and artist Marcio Takara (Incorruptible, Hellblazer) comes a twisted tale of woe, love lost, and parasitic fungi in Poison Ivy #1. Featuring colors by Arif Prianto and lettering from Hassan Otsmane-Elhaou, this opening chapter sends us on a road trip of plant-based death starring one of DC’s greatest villains. With a cutting, delightfully twisted script and staggeringly gorgeous art, this issue is a phenomenal start to this highly anticipated mini-series.

“Pamela Isley has been a lot of things in her life. A living god, a super-villain, an activist, a scientist, and dead. In a new body that she didn’t ask for and with a renewed sense of purpose, Ivy leaves Gotham and sets out to complete her greatest work-a gift to the world that will heal the damage dealt to it…by ending humanity.” 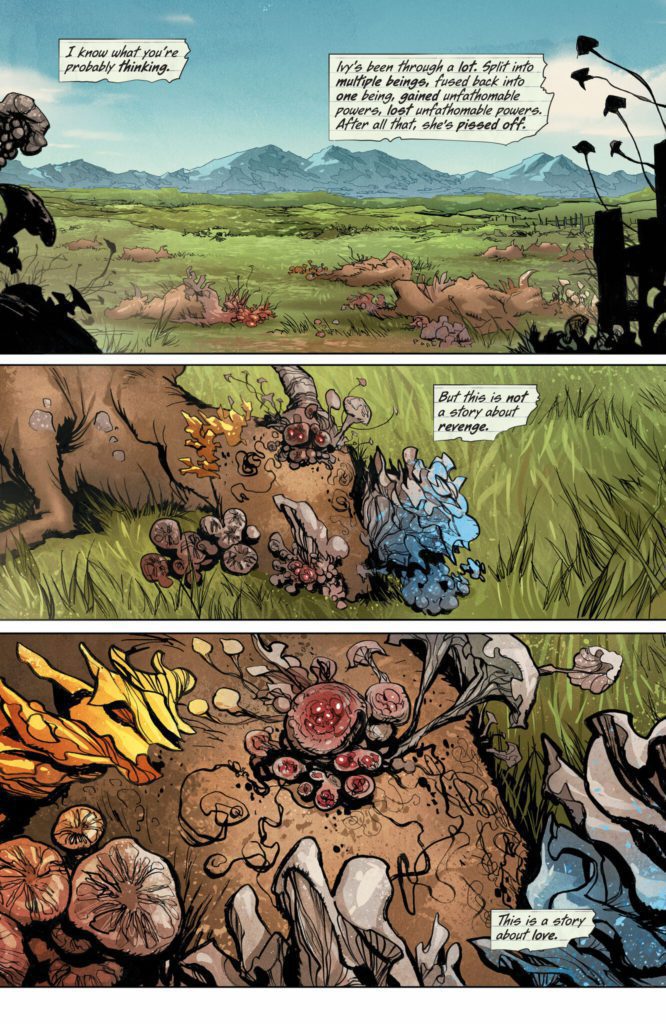 G. Willow Wilson crafts a hugely entertaining and emotionally complex script for Poison Ivy #1. There’s so much fun to be had here on the surface, but all the while our titular protagonist has hit rock bottom. This first chapter poses questions about what Ivy has gone through to send her on this lonely road trip of murder and apocalyptic intent. Wilson does a stellar job of having enough flashbacks and self-reflection to raise the emotional stakes, but keep the full story of whatever tragedy befell Ivy obscured for later issues. The event that occurred before this comic not only emotionally broke her, but also affected her powers. As such, she’s on a quest for world-ending vengeance that’s just as harmful to herself as it is everyone around her.

DC has been on a bend these last few years with trying to make Poison Ivy less of a villain and more like her misunderstood antihero lover, Harley Quinn. While this is all well and good, it is truly delightful in a twisted way to see the Queen of the Green wreaking absolute havoc once again – even if there’s so much sadness behind it. Wilson’s narrative voice and dialogue is snappy and brimming with attitude, making the already fun comic even more engrossing. The script maintains a steady, lighter tone while still having genuine emotional weight. This is a brilliantly written comic, and it makes the wait for the next chapter near-torturous. 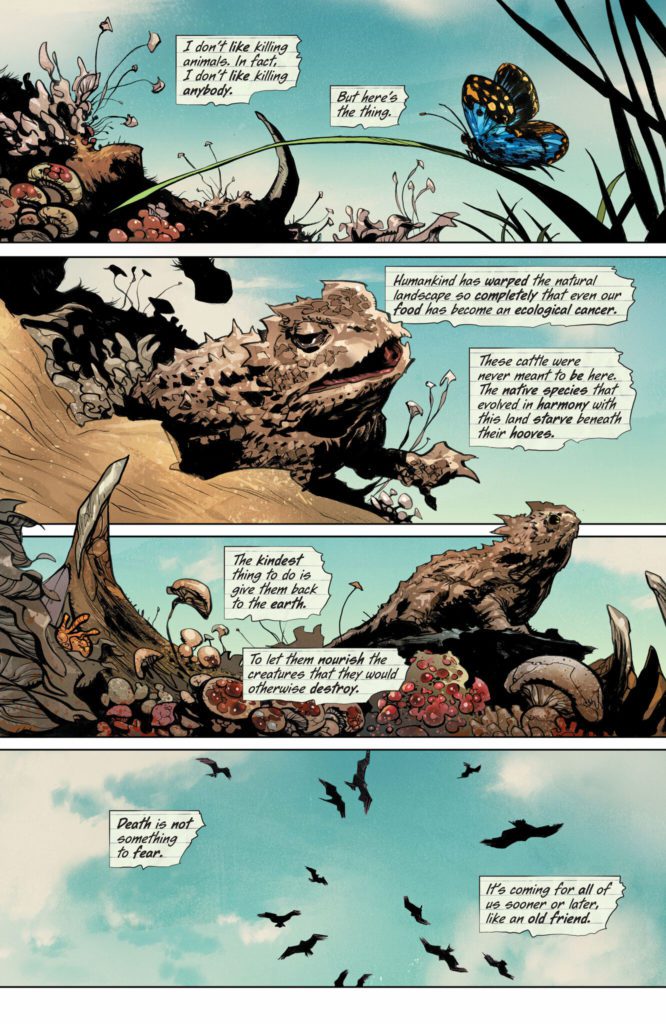 Any DC comic that involves all the weird and wonderful things The Green can end up requires a true artistic talent. Fortunately, Marcio Takara is the visual mastermind behind Poison Ivy #1. As such, this comic is a mind-boggling joy to behold. Takara’s character animations and details pull readers right into the scene with Ivy and her poor victims. However, as great as his character work is, the best material is of course the plant shenanigans. Instead of the usual crawling vines and man-eating flowers usually found in an Ivy story, this one is full of poisonous fungi. Whereas there is a sort of demented beauty to Ivy’s prior powers, what Takara does in this issue borders more on outright body horror. The end result looks like concept art from Naughty Dog’s The Last Of Us games, and this is intended as a compliment. Ivy has never been this outright sadistic, and the physical torment she’s inflicting upon her victims matches her new mission. It’s impossible not to compare Takara’s work here to that of Stephen Bissette and John Totleben on Swamp Thing. The effects of Ivy’s fungi result is the victim having euphoric hallucinations as they die. The artistic result then is a surprising and rad joy to behold. Never has a comic presented Poison Ivy to be as monstrous as she is in these sequences.

The whole visual experience is brought together wonderfully by Arif Prianto’s colors. His work here paints the characters, settings, and fungal-death sequences in a soft yet vivid palette that leaves Takara’s pencils bleeding with life. The real-world sequences, which make up the majority of the comic, are of course stunning and alive with thoughtful detail. The way that Prianto makes a hometown bar in the middle of nowhere just look and so right is some truly brilliant work. The most notable highlight here though is obviously the hallucination sequences. Pages ooze with psychedelic colors all bleeding into one another in the background of the gore and body horror taking place. Prianto does incredible work with Takara in making stomach-churning horror appear oddly beautiful. The lettering from Hassan Otsmane-Elhaou is as fantastic as ever. He uses a very modern font style and injects it with a liquid, dynamic personality that morphs perfectly with the tone of each passage. Overall, this comic is a piece of high-fidelity visual mastery. 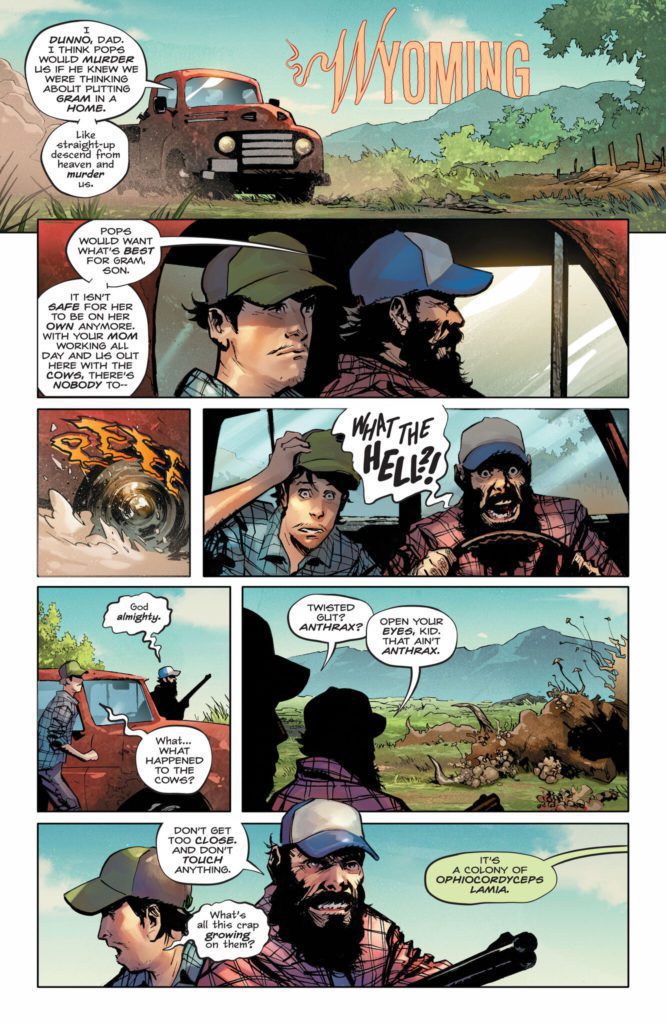 Poison Ivy #1 is a deliciously snarky and wonderfully grotesque start to this solo series starring one of Batman’s coolest foes. G. Willow Wilson captures Ivy at her lowest and most enraged, with a complex script that manages to stay even-toned despite its breadth of emotional turmoil. The visuals from Marcio Takara and Arif Prianto are stunning and vivid, using a varied range of visual touches to create a comic that feels conventional at points then gives way to horror and psychedelia. This is an outstanding #1, so be sure to grab a copy when it hits shelves on June 7th!

Delightfully twisted yet notably sad, Wilson and Takara's Poison Ivy #1 is a viscerally engaging and stunning start to this solo-series starring one of Batman's best foes. Review: POISON IVY #1 - Horticulture With A Body Count