Review: THE DREAMING: THE WAKING HOURS #1 – More Things On Heaven and Earth…

The newest chapter of the Sandman Universe is here, with “The Dreaming: The Waking Hours” #1 from writer G. Willow Wilson (Invisible Kingdom, Cairo) and artist Nick Robles (Euthanauts).  With the help of returning co-creators Mat Lopes and Simon Bowland on colors and letters respectively, this first issue of a new Sandman story is a compellingly written and character-focused opening with incredible artwork that is sure to please both old fans and newcomers alike.

“One of Dream’s heaviest responsibilities is the creation of nightmares-the beings that haunt our sleep and turn our thoughts toward darkness. In the form of Ruin, the nightmare of catastrophic failure, Dream was certain he’d built his next masterpiece…but Ruin can’t help but live up to his name, sending every situation into a spiral of unexpected consequences. Unfortunately, Shakespearean scholar (and exhausted new mother) Lindy has dreamed of Ruin…and in the process, she’s delivered him unto the waking world!” 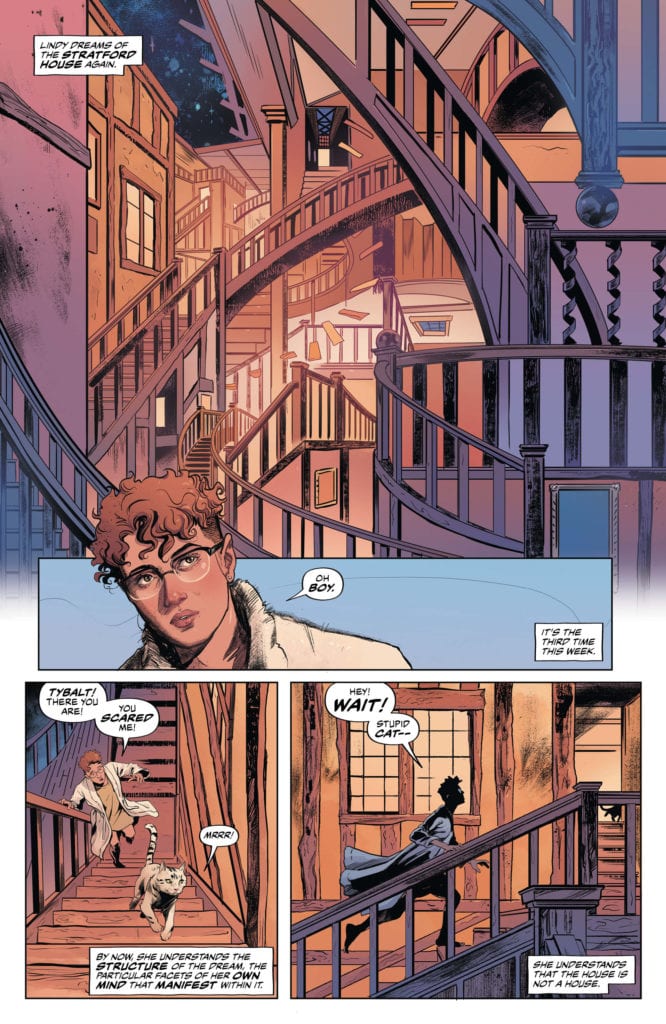 Writer G. Willow Wilson has the unenviable job in “The Dreaming: The Waking Hours” #1 of both following up Si Spurrier’s stellar  The Dreaming run that ended earlier this year, as well as adding to the legacy of Neil Gaiman’s original Sandman. It seems from this first issue however that she is very much up to the task. This is a well-focused issue that bears down on its characters and their struggles, while also reiterating the lore of the Sandman Universe without ever wading into needless exposition. Both protagonists, the struggling intellectual single-mother Lindy and struggling young nightmare Ruin, are instantly compelling and easy to relate to as characters, and both for totally different reasons. Willow’s blending of a simple, character-driven plot and fantastic dialogue sensibilities keep this an easily enjoyable read that still has all the mystery and fantasy needed in a  Sandman tale. The only issue I ever had with Spurrier’s work on  The Dreaming was his reliance on the original  Sandman for his plot. Being well-versed in Gaiman’s original work didn’t make this a personal issue for myself, but it could easily have been overwhelming for anyone stepping into this universe for the first time. Wilson’s work here improves upon that aspect with a plot that is easy to follow and compelling for readers with little-to-no  Sandman knowledge but filled with enough references and easter eggs for classic fans (such as myself) to be satisfied. The succinct, compelling script here make for a fantastic start to this new chapter in the Sandman Universe. 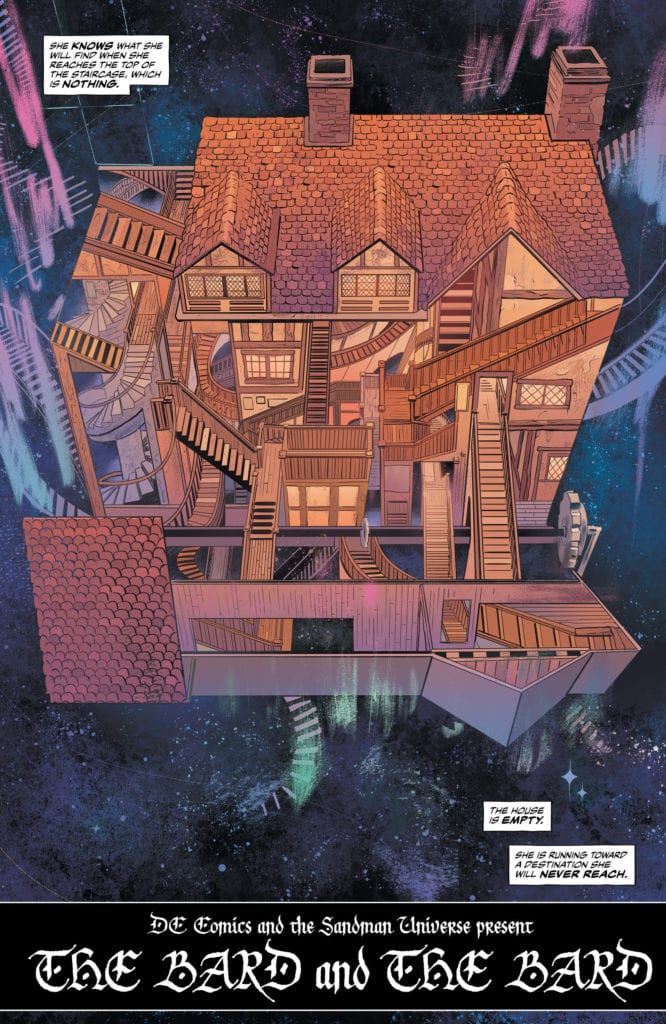 As imposing a position as Wilson has, artist Nick Robles has massive shoes to fill as well. Robles steps in after the Eisner-nominated phenom Bilquis Evely’s work on The Dreaming for this first issue of “The Dreaming: The Waking Hours.” Fortunately, Robles proves more than ready for this task. “The Waking Hours” looks every bit as stunning as its predecessor, in terms of character design, direction, and the necessary fantastical visualizations. Robles’s animations on each character are stunning, bringing each of them to life with blossoming vibrancy. His detailed environments, from Lindy’s cramped apartment to the mazes crafted in The Dreaming, are immaculate in their construction. Robles is such a fitting successor to Evely not just for his unique talent, but also because his style is strikingly similar to the prior artist. This is in no way a detraction from his talent, it’s very much a compliment. Robles’s ability to match the style of one of the best artists currently in the industry while maintaining his own visual mark makes him one of the most promising new artists in comics. This all being said, Robles is helped out by returning  Dreaming colorist Mat Lopes, who also colored Evely’s pencils on the prior series. The matching aesthetic of both the former series and “Waking Hours” is primarily owed to his outstanding work, with one of the most expansive palates seen in recent comics. There’s a considerable detailed finesse in his work as well, with carefully selected shades revolving around specific characters and the context of their scenes. Also returning is letterer Simon Bowland, whose expressive and character-specific fonts give this comic the proper  Sandman reading experience as has been done for decades now. Visually, “The Waking Hours” is almost as good as it gets in the world of comics. 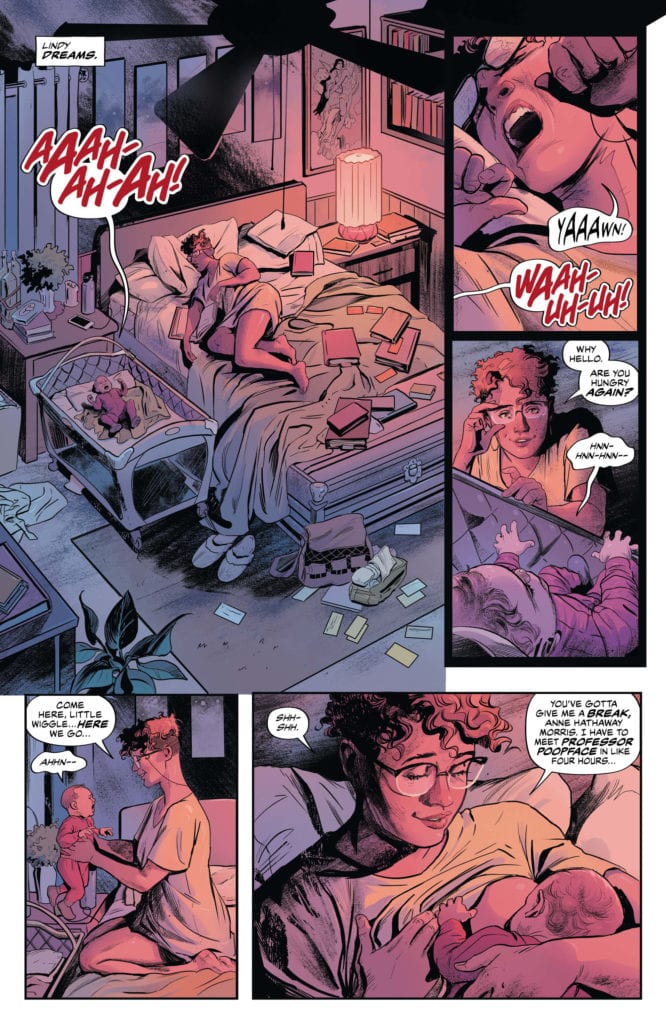 “The Dreaming: The Waking Hours” #1 is a focused and brilliantly interesting start to this new saga in the Sandman Universe. G. Willow Wilson’s script is full of thoughtful character writing and intelligent but easy-to-follow fantasy. The visual work of Nick Robles and Mat Lopes is some of the best done in the whole of  Sandman’s history, and a fitting continuation of the prior series’s aesthetic. This comic is an easy recommendation to both veteran  Sandman fans and new readers alike. Be sure to grab this debut issue when it arrives at your local comic shop on 8/4!

A new Sandman chapter that starts with an immensely entertaining bang.Review: THE DREAMING: THE WAKING HOURS #1 - More Things On Heaven and Earth...