Writer Cullen Bunn (Harrow County, Dark Ark) and artist Andrea Mutti finish their dream-walking miniseries with Parasomnia #4. Though still unclear as to what’s truly happening here, this finale is less frustratingly vague about its plot and brings itself to a semi-ending that teases more to come. With a tightly paced script and atmospheric visuals, this issue seals Parasomnia as a wholly unique horror read that hopefully recerives a proper conclusion soon.

“As the nameless stranger battles nightmares in a dream world on his hunt for his missing son–his life and his family’s in the real world continue to fall apart in this chilling conclusion to this supernatural and melancholy tale.” 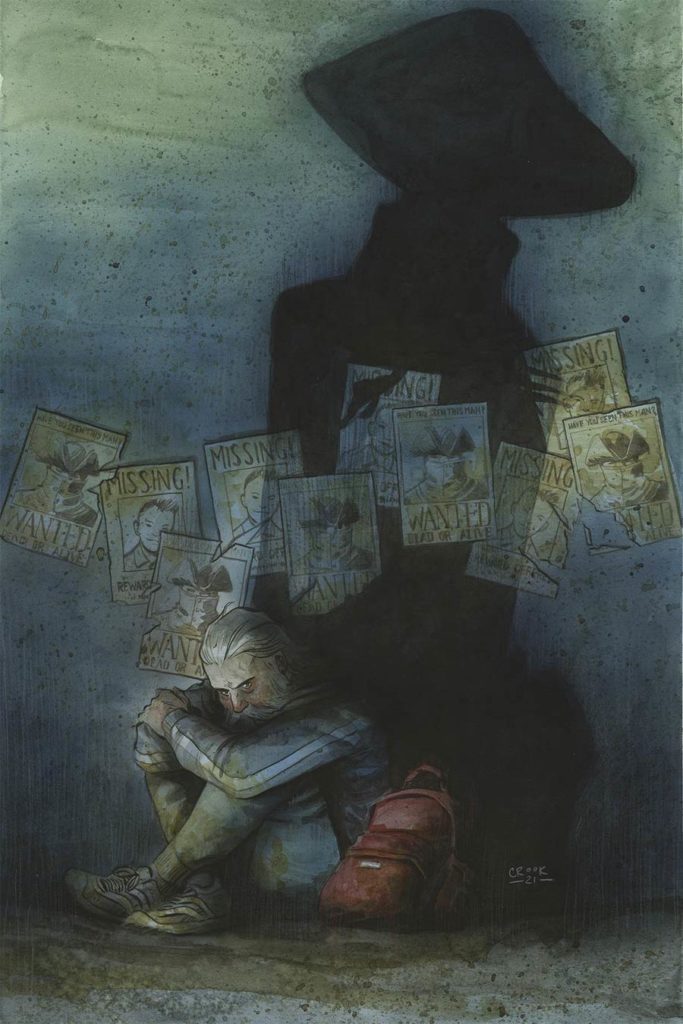 Cullen Bunn’s script for Parasomnia #4 succeeds partially for being more focused than its predecessors. There is a tighter focus on the parallels between the real world and the dream – and the lack of distance between them. This discrepancy has always been a part of this comic, but it’s always felt too clouded to be fully engaging. Issue #4 takes these points in the narrative and sharpens them to a climactic point. The story of our mask and tri-horned hat-donning protagonist is still a mystery, but his connection with reality is becoming clearer. Bunn’s pacing is consistently tense and pulls the reader along at a brisk, exciting speed.

The dialogue writing is at the perfect amount, just enough to get a feel for the characters but not enough to bog down the story. There’s a mythic intensity to how Bunn presents the dialogue of protagonist and his (presumably) Native American ally. This comic feels like a mix between a lone hero story along the lines of Conan or Berserk. However, it’s treated obviously mixed in with a supernatural thriller and familial horror story. The fact that this is the final issue of this specific series is both bold and odd. Without getting into spoilers, don’t expect any sense of finality when you finish this comic. I hope whatever Bunn has planned next arrives hot on the heels of this miniseries.

The most alluring aspect of Parasomnia has always been Andrea Mutti’s visuals. Here on this final issue, this fact remains. Mutti’s pencils and colors create a brilliant atmosphere and tone for this dream-walking thriller series. His thin penciling allows for fine character detail, shown in careful creases and expressions on every panel. The environments appear deceptively empty, but this is due to how Mutti creates the world here. His colors are made of hazy clouds of single hues that dominate entire sequences. Pages will turn from light greens to rustic browns then to purple without warning. This is a delightfully creative way to create the dreamscape feeling this comic needs. The lettering from Simon Bowland, who lends his incredible talent to The Dreaming, seems to have an easier job here. His contemporary fonts alter just enough to capture tone, but there’s nothing drastic here. Overall, this remains a tonally rich comic that other horror comic artists may want to take note of.

Parasomnia #4 is a good comic but a bad ending. Bunn writes the most well-paced and entertaining script of this miniseries, but offers a conclusion with no finality. The moody and atmospheric visual work of Andrea Mutti continue to please and make for this comic’s best selling point. If there is truly more to come from this story, I hope it arrives soon. Be sure to grab this finale when it hits shelves on 9/29.

Ending as mysteriously as it began, Parasomnia #4 concludes this miniseries in intriguing fashion that feels less frustrating than prior issues and teases the possibility of more to come.Review: PARASOMNIA #4 - An Unclear End(?)