Writer G. Willow Wilson and artist Nick Robles, along with colorist Mat Lopes and letterer Simon Bowland, return with another chapter of their outstanding addition to the Sandman mythos in The Dreaming: The Waking Hours #8. This issue sees Heather After, Ruin, and Jophiel take a trip to the land of Faerie (some more reluctantly than others), and what results is quite possibly the most outright entertaining issue of this series thus far. With a hilarious and well, sexy script and staggeringly incredible artwork, this is a masterwork of a comic issue and possibly the best single issue of 2021 so far.

“Heather After has a theory about just where Ruin’s lost love might be found…but the realm of Faerie is a dangerous place under the best of circumstances, and as Ruin, Heather, and Jophiel will quickly find when they cross between worlds, the circumstances there have changed quite a bit!” 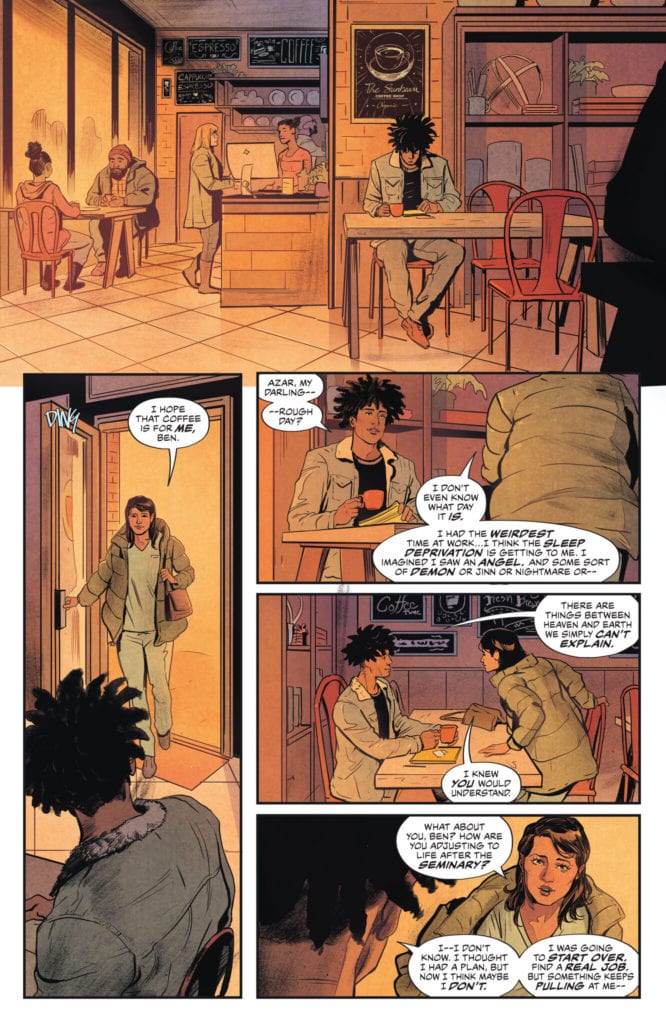 G. Willow Wilson has been firing on all cylinders during this run, so when I say that her script on The Dreaming: The Waking Hours #8 is some of her most impressive work yet, I’m saying quite a bit. The different personalities of the angel Jophiel, the naïve nightmare Ruin, and the confident sorceress Heather. After are all written to clash and bounce off of one another, and it makes for some of the best conversational dialogue I’ve ever read in a comic. The humor in this issue is outstanding, and every funny bit lands with a chuckle. The latter part of the issue with the group’s arrival in Faerie makes for the most hilarious yet ominous moment in the book, blending humorous sexual comedy with that classic Sandman mythological subject matter and dark magics. Indeed, there is a growing dark undertone to this comic that carries along as Dream follows the trio’s trail, making for a layered and complex read. This mix of whimsy, humor, and threatening auras is pure Sandman magic of course and is the exact sort of thing one would expect to see in a book sprouting out of Gaiman’s universe. However, it’s not since Gaiman’s original Sandman that this world and this cast of characters has been so damn delightful to be a part of. 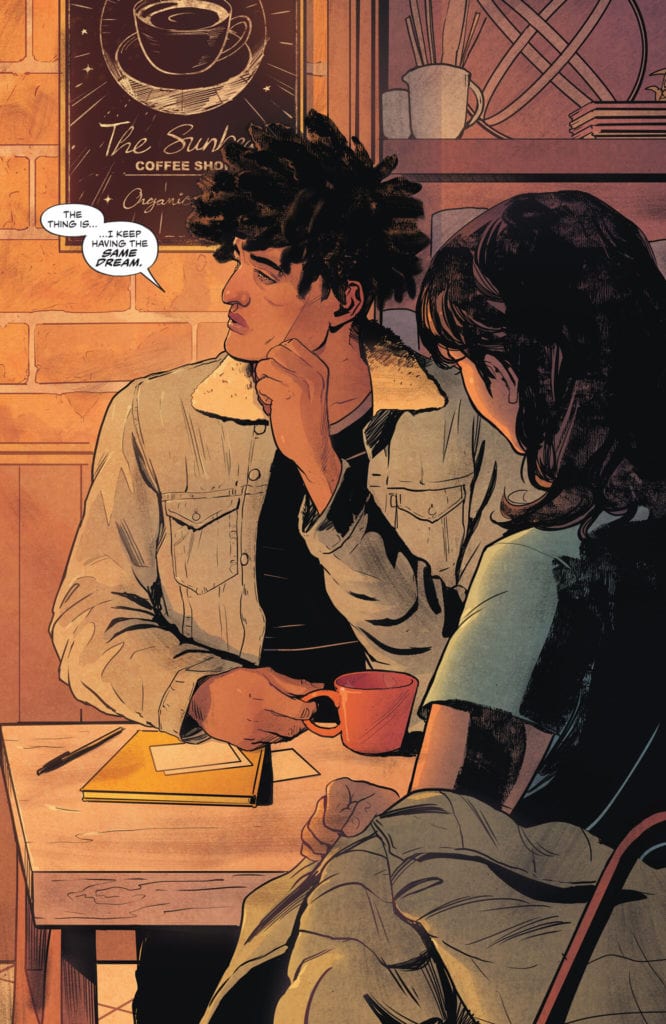 The phenomenal Nick Robles, the artist behind the first 6 issues of The Waking Hours, finally makes his return here for issue #8. While the fill-in artists have done amazing work, I’d almost forgotten what I was missing when I saw Robles’s pencils again. His thin, delicate linework allows for so much intricate detail and animation on every panel, and everything springs forth on the pages from the décor of a coffee shop to the fur of a burly minotaur. The animations for every character, both main and random extra, are full of individual life, and the personalities of each person come through perfectly. Robles may indeed have my pick for my favorite drawing of Dream of the Endless (maybe, at least for Daniel, if not Morpheus). Robles’ originality and vision construct page layouts is once again an awe-inspiring experience, as he once again eschews traditional formats and directing for images that organically bleed from one image to the next. Panel borders hardly seem to exist, and when they do, they are unnoticeable – but nothing ever feels cluttered. Mat Lopes’s colors once again work immense wonders into this saga in the Sandman Universe, offering an incredible array of tones on every page. I admired the opening orange sunlit scene in a coffee shop on the first couple of pages for a few long moments before moving on. This is a pretty tame scene compared to Lopes’s coloring of Dream and the Dream realm, Faerie, and numerous mythological beings and the luminous colors they exhibit. It’s just such simple moments are rarely given such beauty in this or any medium. Simon Bowland’s lettering is as grat and consistent as it’s always been, with the character-themed fonts and pitch-perfect bolds and italics on every page. The Dreaming: The Waking Hours continues to be one of the best-looking comics on stands right now. 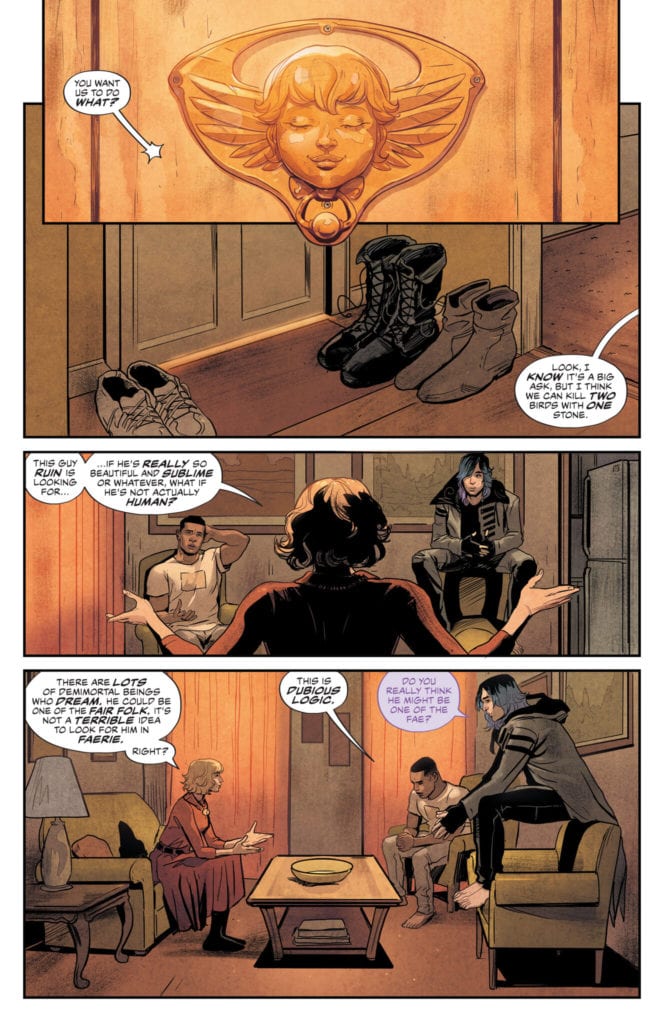 The Dreaming: The Waking Hours #8 is a stupendously clever and witty comic. G. Willow Wilson’s script offers up a ton of personality and heart, as well as some of the funniest moments ever seen in a Sandman comic. The visual work is once again outstanding, with Robles’s pencils and Lopes’s colors creating a world that can only be described as the height of visual work in the comics medium. Be sure to grab this newest issue when it hits shelves on 3-2!

A beautiful, hilarious, and enchanting issue that encapsulate all there is to offer in the Sandman Universe.Review: Old Evils Come Home In THE DREAMING: THE WAKING HOURS #8