Acclaimed television writer Rodney Barnes and Spawn artist Jason Shawn Alexander create a bold hybrid of crime thriller and supernatural horror in “Killadelphia #1.” Barnes’ deft and original plotting blends superbly with the darkened realism of the art style to make for one of the most promising first issues of the year.

In “Sins of the Father Part One,” the death of revered detective James Sangster Sr. brings his estranged son, a small town cop, back home to bury him. When this son discovers his father’s latest case on a series of mysterious murders and some rather insane claims, he decides to investigate. Little does he know that he’s about to dive into the maw of long-hungry terror in a story that’s a brilliant supernatural-crime-thriller as well as a searing indictment of those responsible for urban poverty. 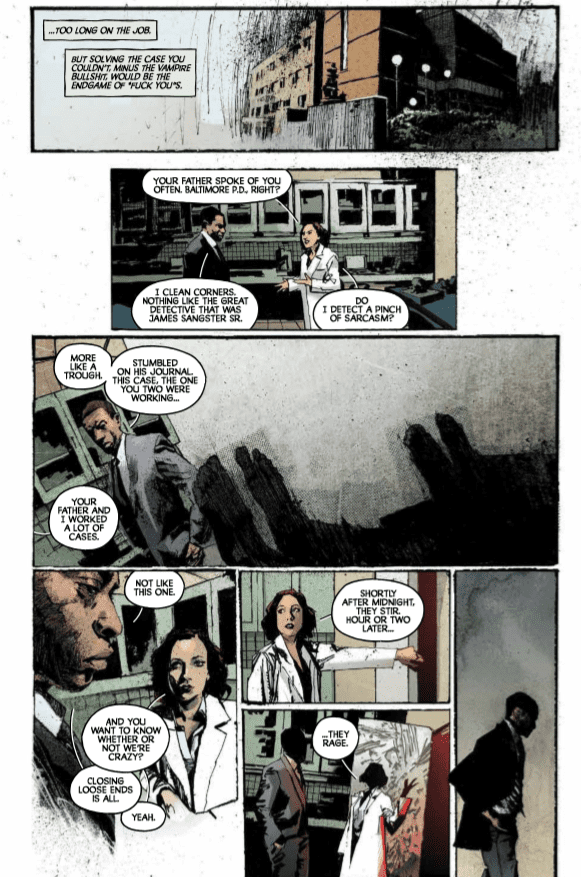 The most impressive part of Rodney Barnes‘ writing in this debut issue is the originality of the plot itself. The familiar elements of crime-torn urban projects and vampire horror come together with hints of historical fiction and modern political commentary. Every piece of this genre menagerie fits together like a puzzle and it never comes across as overly audacious or overstuffed. The dialogue adds in great part to both the plot and character development. The frame narrative with Sangster’s investigation is colored with varied character interactions that all have their own distinct tone. Even the protagonist Sangster Jr.’s more quiet and observing personality shines through in his specific moments. Jr.’s characterization is another stroke of genius on Barnes’ part, as it’s made clear that he is this way because of his upbringing. Without getting into spoiler territory, Barnes’ use of early life trauma as a sort of subplot device is key to the entire emotional core of the story, and it stays on the reader’s mind without ever overtaking the external events of the main horror story.

A large chunk of the story is given in emails and journal entries, and this works exceptionally well. Investigative crime stories need these sort of anecdotal devices as part of their nature, but it can be difficult to do without losing the audience in bulky exposition. Fortunately, Barnes is more than capable of delivering here. The notes all feel heartfelt and natural in the same way good dialogue does. There are revelations found in these bits of writing that also cleverly keep the audience in the dark in the best way. There’s a smorgasbord of exceptional writing delivered by Barnes here. 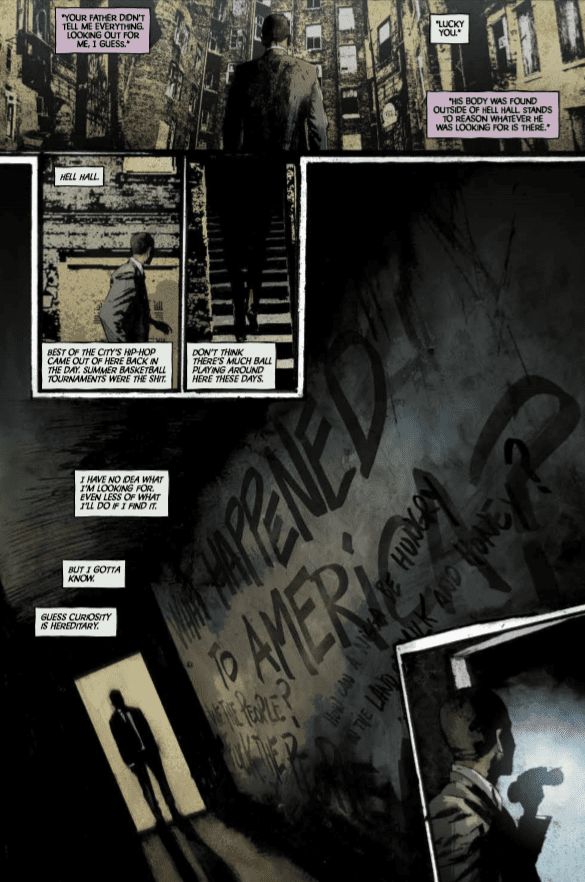 “Killadelphia #1” reaches a state of tonal and atmospheric perfection due in large part to Jason Shawn Alexander‘s immersive artwork. The tortured and tense mood throughout the issue is reflected in the semi-photo-realistic details that Alexander puts into his characters and the settings they inhabit. Sangster Sr.’s experience and determination is contrasted with his son’s quiet reservation. Small tonal touches like this are what stand out most in this comic as far as true talent is concerned, bringing forth Alexander’s skill in a more reserved way than his other well-known works. The grainy and shadow-intensive inks remind the audience that this is still a horror comic, and every monstrous detail (much of which is withheld for suspense) comes across with the perfect amounts of shock. Alexander’s work is filled by Luis Nct’s hazy coloring. Philadelphia is given the look of a proper overcast urban crime environment, with sudden explosions of reds or yellows that work almost as signal flares for the coming horror show. The art in the book is spectacularly good and is perfect for what kind of story is being told.

Marshall Dillon’s lettering is mostly par for the course during the normal dialogue and narrative texts, but he gets more to play with in the form of Sangster Sr.’s journal entries. The handwritten cursive styling of these passages work not only in the sense that they reinforce the immersion, but they also coincide with Sangster Sr.’s personality. The fact that this character wrote his entire journal in cursive fits with Sangster’s traditional and stoic personifications the audience has come to see from him. It can be a little hard to read at points, but being honest, that’s rather the point. 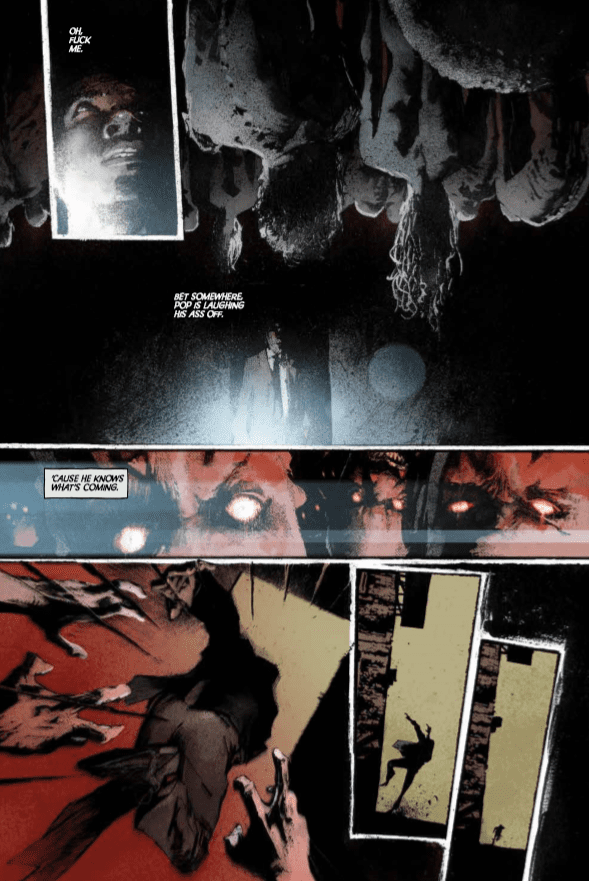 “Killadelphia #1” is a gripping and engrossing cross of crime procedural, familial drama, urban political commentary and vampire horror. Barnes somehow manages to blend these genres together seamlessly to make a first chapter that succeeds in spades. It’s emotionally riveting and outright suspenseful. Alexander’s art here brings the world and characters to perfect artistic vision while collaborating with the script to maintain tension and leave the most horrific moments to the imagination of the reader. This is without a doubt one of the most promising debut issues of 2019, and make sure to have in your folder at your local comic shop on 11/27.