Review: SPAWN #302 Takes On The World

SPAWN #302 opens up an exciting new chapter for everyone’s favorite Hellspawn. Available in comic book stores on Wednesday, November 6th, Todd McFarlane’s latest installment is clearly riding on the coattails of the events from issue #301, featuring Al Simmons, a.k.a. Spawn, adjusting to his new “celebrity status” as Earth’s fighter against injustice. At the same time, new configurations of Hellspawn have seemingly erupted from the Earth itself, and corruption in all forms plague society.

It looks like this crusader has more than enough to keep him busy, but will his one-man army be enough?

As if the notoriety and acclaim wasn’t reward enough for his recent feats, Spawn also received major suit update a few issues ago. The character’s gone through many costumes throughout his history, but this particularly change is significant in that it marks a clear distinction between the man and mask. Simmons is able to send the symbiote suit to do his bidding apart from his body—a practice he’s been prone to enacting on his targets as of late.

On top of these new abilities, readers witness Simmons embrace aspects of who he was before his death. Rather than relying solely on Hellspawn powers for the crime-fighting throughout this issue, he’s found the confidence to rely more and more on his military training to do the job. No suit? No problem. Because as we learned in issue #300, the power of this hero is in the man, not that costume.

But despite the relative ease with which Simmons tracks down corrupt businessmen and dealers in this issue, a greater threat slowly bubbles to the surface in conjunction with his improved powers.  Is there anyone who can lend aide to the hero?

SPAWN #302’S illustrations embody an impressive blend of realism and supernatural horror. McFarlane and Jason Shawn Alexander’s penciling and ink work provides readers with crisp representations of Spawn and the men he murders, gore and all. This is completed by colorists Peter Steigerwald and Greg Menzie’s deep shades of crimson and black, with a splotch of bright green to remind us of the necroplasm that’s ever-present in our hellish hero. And Tom Orzechowski’s lettering ensures all of this artwork remains in focus by placing his long swaths of dialogue text in optimal spaces in each panel. 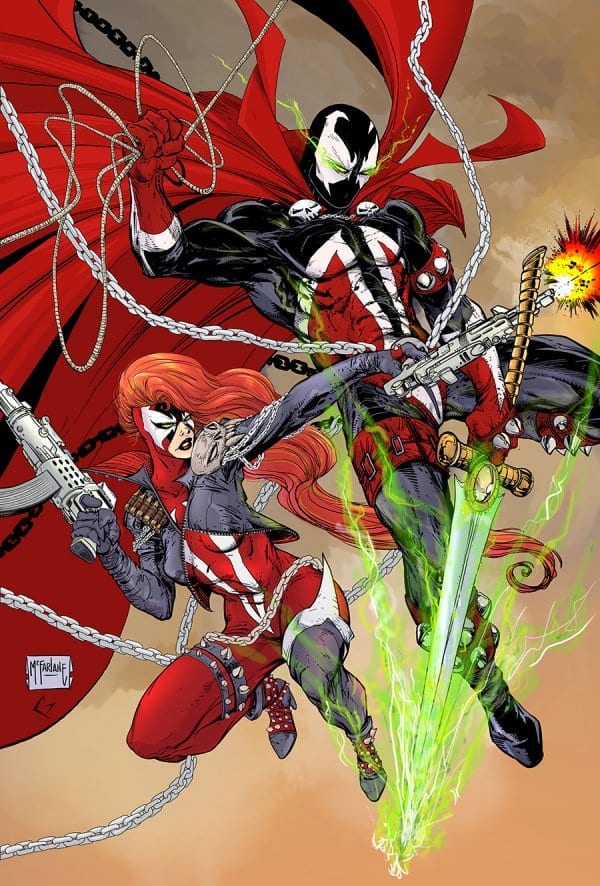 McFarlane and Greg Capullo’s penciling and Menzie’s coloring for these covers are top-notch Covers A, B, and (colorless) C depict Spawn in his sleek new suit while holding an impressive military-grade gun, reminding readers that this hero is ready to continue the fight with both his Spawn powers and combat training. .

McFarlane and Menzie take on covers D and E as well, which feature Spawn and the newly introduced She-Spawn from a few issues back. This helps promote the mini She-Spawn series that could potentially coincide with the main series. We hope so; Spawn needs all the help he can get to face the coming battles.

The new storyline McFaclane sets up in SPAWN #302 has the potential to renew the character’s universe with multiple versions of Hellspawn. Will they assist him in his fight against injustice? Or will seek to make his life even more of a living hell?

How do you think Simmons’ recent stream of murders will affect the coming events? Let us know in the comments below.

On top of new abilities, readers witness Simmons embrace aspects of who he was before his death. Rather than relying solely on Hellspawn powers for the crime-fighting throughout this issue, he's found the confidence to rely more and more on his military training to do the job. No suit? No problem.Review: SPAWN #302 Takes On The World