NEW MUTANTS #12, available from Marvel Comics on September 2nd, rips the headlines from the headlines as the team pays a visit to an unscrupulous website’s writer’s room. Ed Brisson lays out a story of that’s a tiny slice of payback that concludes with a heartfelt bit of catharsis for Glob. I was not expecting this book to hit such a strong emotional chord.

Mike Del Mundo draws on some old school inspiration for his cover. It’s meant to mimic a magazine cover for the website featured in this issue, but it’s formatted like a classic magazine cover such as Time or Life. I liked the symbolic charm of Magik slicing through the reporter microphones (shades of the issue’s main plot), and her rendering gives off a distinctly Darwyn Cooke vibe.

Admittedly, Brisson’s story caught me off guard. It starts as a simple mission lead by Magik to intimidate a website devoted to doxxing mutants, enabling the worst of humanity to intimidate, bully, beat, and murder mutants for the crime of living. Taking queues from the real world, Brisson finds a unique solution to the problem that, sadly, would probably only work in comic books. The clear message from Brisson on the front-end of the story is that actions should have consequences, for good and bad.

Toward the tail end of the confrontation, Glob takes a turn that surprises even his own teammates. Afterward, there’s a scene between Glob and Magik, where he gets the past off his chest and opens up. This scene lasts a solid four pages, and it’s worth every panel, every word balloon. When we talk about X-titles, this is the kind of scene that should bookend every big, flashy battle to ground the characters humanly. Mutants, regardless of the physical manifestations and powers, are still people. People who live, feel, hurt, and cry, and Brisson’s story reminds you of that fact in a powerful way.

Marco Failla’s art is excellent in this issue for one specific reason that I’ll get to in a moment. The characters are well-rendered. What little action there happens in the book is kinetic, and the close-up panels punctuate the dramatic notes perfectly. But the single biggest eye-catcher is the highlight character of this story – Glob.

You can’t take your eyes off Glob. He’s a skeleton with eyes and organs encased in pink goo. The character description is ridiculous, and somehow, Failla makes you believe this could be a living being, and that makes that last scene all the more heartbreaking.

In Chris Claremont’s seminal God Loves, Man Kills, Kitty Pryde defends Nightcrawler by pointing out how he has more right than anyone to be bitter about being a mutant because he can’t hide, and his looks are stereotypically demonic. I get that same vibe with Failla’s work here because Glob is drawn as both terrifying and simultaneously worthy of the greatest sympathy you can muster. Humanizing the inhuman (no pun intended) makes for excellent work.

Carlos Lopez put the icing on the Glob cake with remarkable shading work. Every panel is richly shaded to give the characters’ weight and substance. Picking on Glob again, Lopez has to take as much credit as Failla for bringing a walking Jell-O mold to life. How do you give the almost formless form? How do you give somebody without a face facial expressions? Lopez is half a step away from becoming an inker with Globs coloring, and he deserves big props for pulling it off. 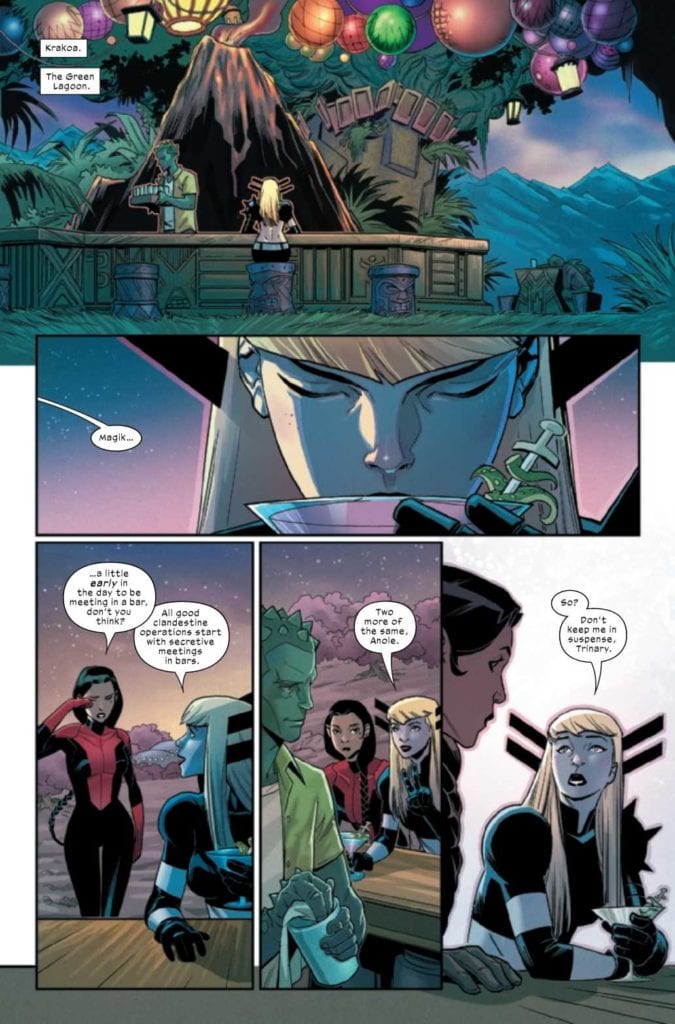 Travis Lanham’s lettering is solid in this issue. Makes excellent use of empty space to get the words across without cluttering over the art. There’s more dialog than action in this issue, and yet, Lanham knows how to break up the speeches to make the reading more manageable and keep the pace flowing.

NEW MUTANTS #12, available from Marvel Comics on September 2nd, takes a pretty vanilla X-team story, blends it with a real-world issue, and creates a story that reminds you that mutants can be just as human, if not more so, than anyone else. Probably the best X-Men comic book I’ve read in a very long while.

NEW MUTANTS #12 takes a pretty vanilla X-team story, blends it with a real world issue, and creates a story that reminds you that mutants can be just as human, if not more so, than anyone else. Probably the best X-title I've read in a very long while.Review: NEW MUTANTS #12 Is Glob's Moment To Shine